As mentioned in this thread, I picked up a rear Alpina spoiler off forum member Angus (opalgrunt) a few months ago and finally set about refinishing it. I should start by mentioning that I am by no means a professional. Anyone with a fundamental knowledge of filling, surface preparation and paint should be able to tackle this with ease.

Unfortunately, the majority of the photo's I took of the spoiler in it's initial condition have been lost as the phone they were taken on shat itself, however here are two I could find. I've purposefully included large photo's to give you an idea of the surface condition. This shows the top surface, in a section that was probably the least severe, however it still gives you an idea. 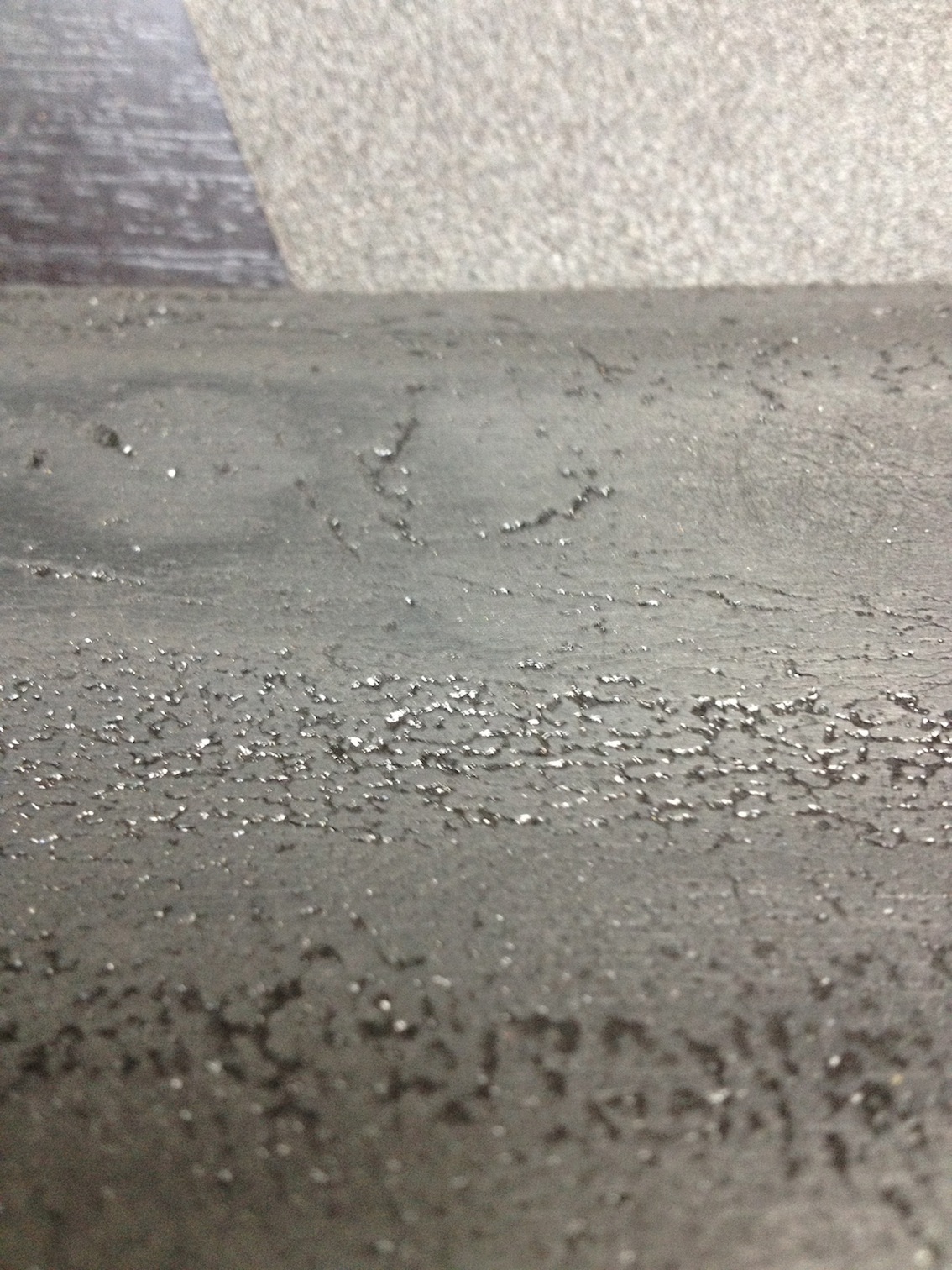 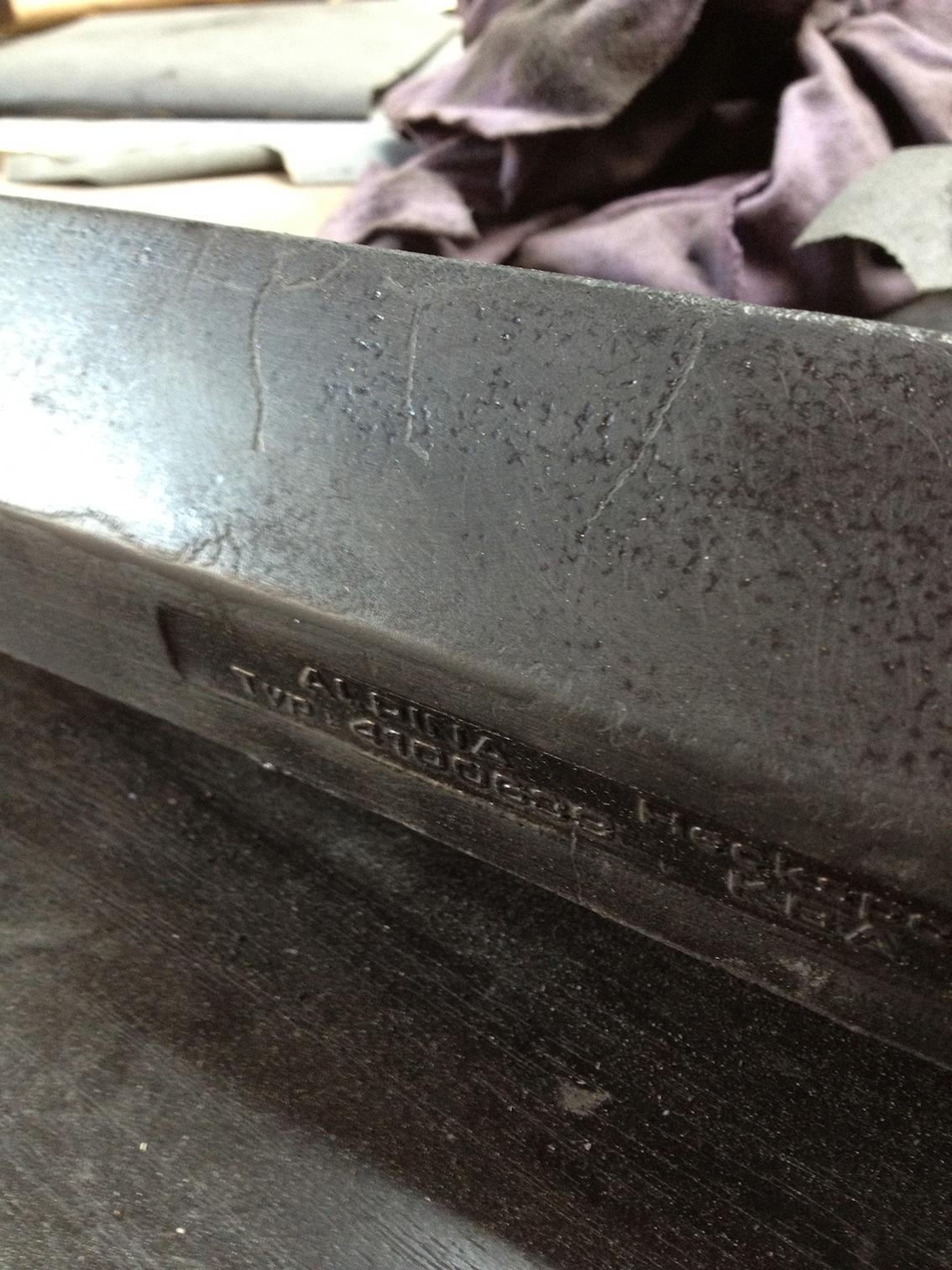 These don't show the severity of the sun damage overly well, however the surface condition was raw, with severe surface pitting, pinholes and scarring. There was also evidence of previous repairs and attempted re-paints using products that were unsuitable for flexible rubber. My first step was to remove all of this.

Initially, I sanded the old paint and filler out using 240 dry, with no chemical preparation. The results were satisfactory, and this should be a step that hopefully isn't necessary for most of you, as old paint in pinholes, and low points is a PITA to remove without chemicals. My recommendation for a surface that isn't too severe would be to sand with 500, then 800 dry. I should also mention that there is a risk with severely damaged surfaces, of penetrating into the foam core with aggressive sanding, so be mindful of this and stop and check your work often. If you begin to notice pinholes opening in the sanded area, it's a sign your beginning to get close to the core. Having said that however, I was quite aggressive with my sanding, so play it by ear and be mindful. Your goal here is to basically remove the original layer of sealer and top rubber coat to reveal the softer, undamaged layers underneath.

I then applied the filler. After scouring the interwebs, I decided to go with Leatherique crack filler. Another fellow had used this to repair some minor pitting in an e24 rubber spoiler and his results were decent, so I contacted Leatherique, and ordered a 2oz container from their Australian distributor. 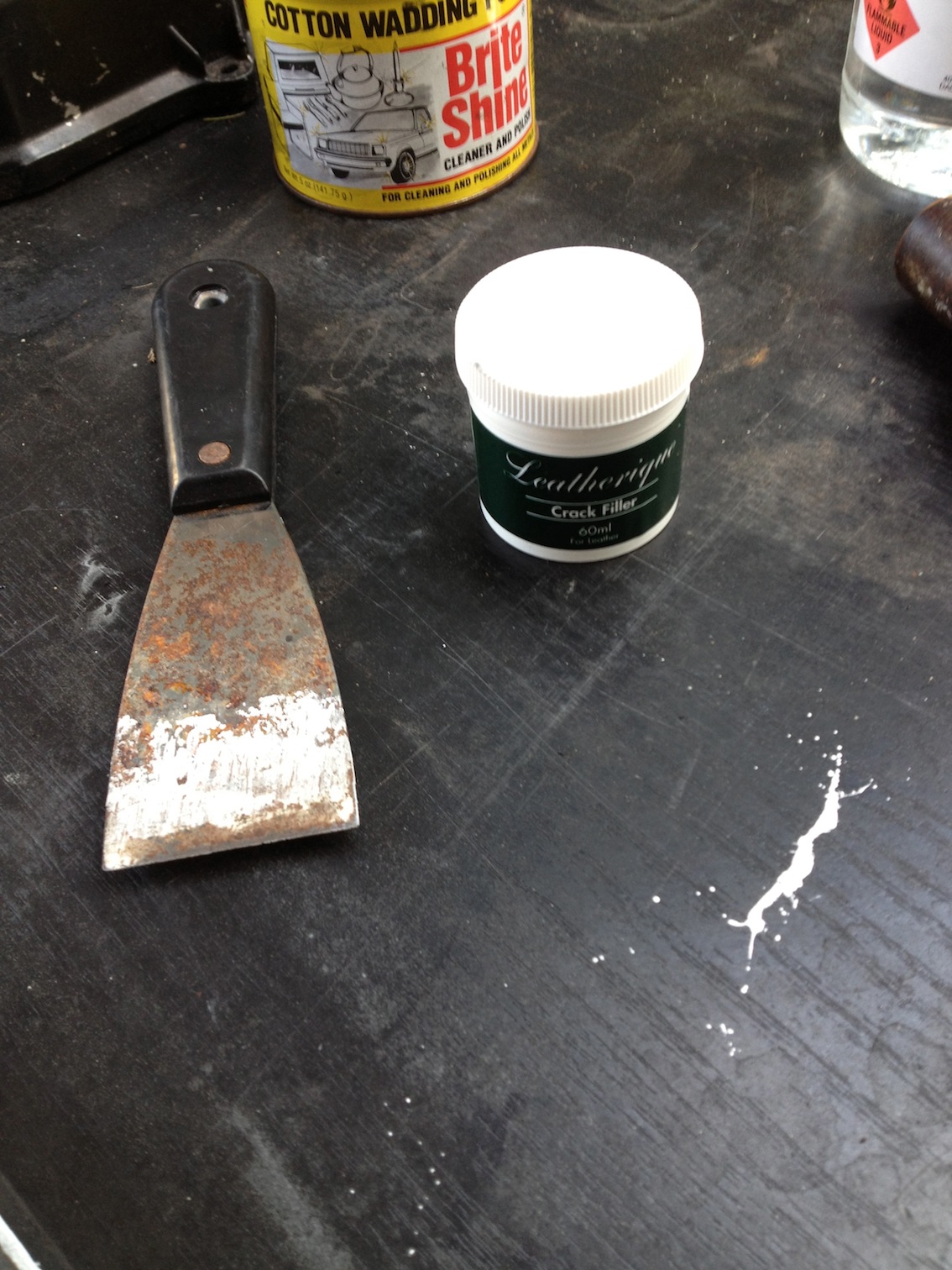 I initially applied it liberally with a spatula, using the front edge to press the filler into the deepest of the pinholes and cracks. The raw surface soaked it up quite quickly. I then sanded using 240 followed with 500, and repeated the process 2 or 3 times with the spatula till the worst of it was filled. 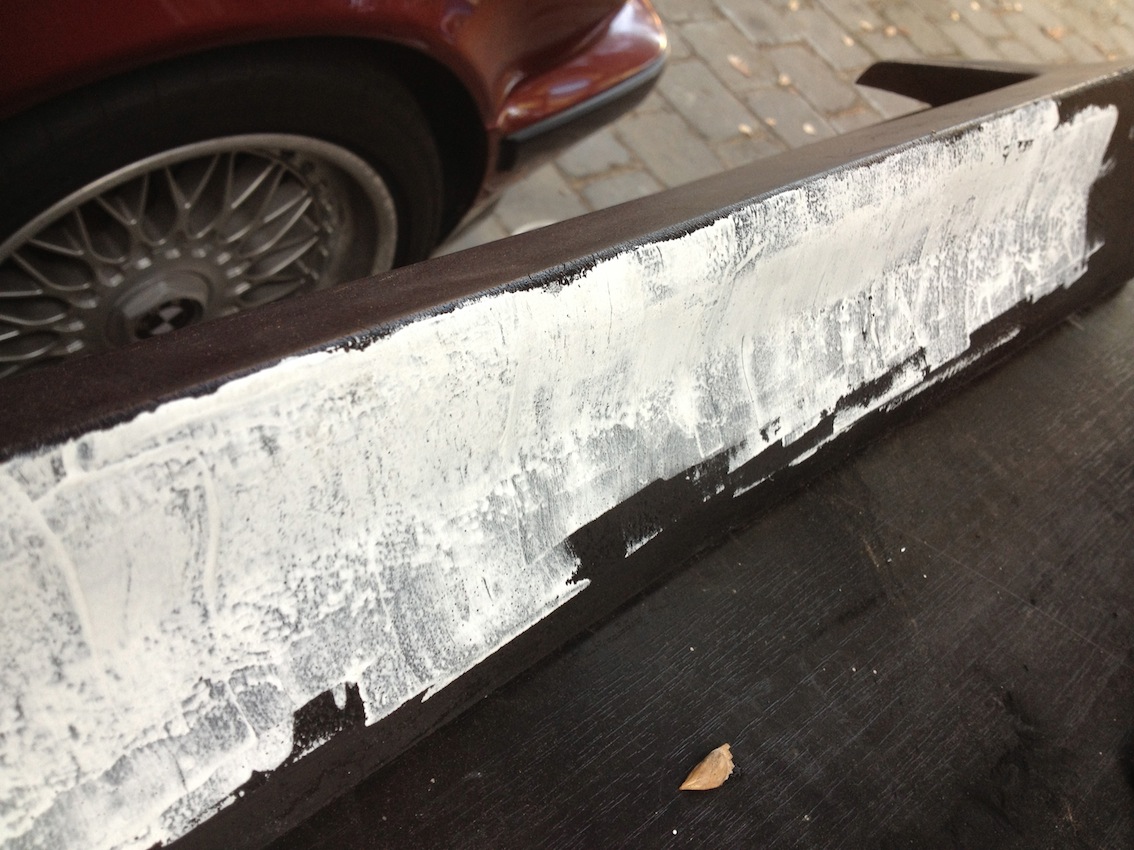 Unfortunately again, I have no photo's after the first wave of sanding, but the worst of the pinholes and cracks had been filled quite well. There were still some larger low spots and shallow dips to be filled however. I poured half the container of filler remaining and applied with my fingers across the entire length of the top surface, and allowed it to dry quite thick. This ensured the rest of the imperfections were filled, before beginning the final preparation before painting. 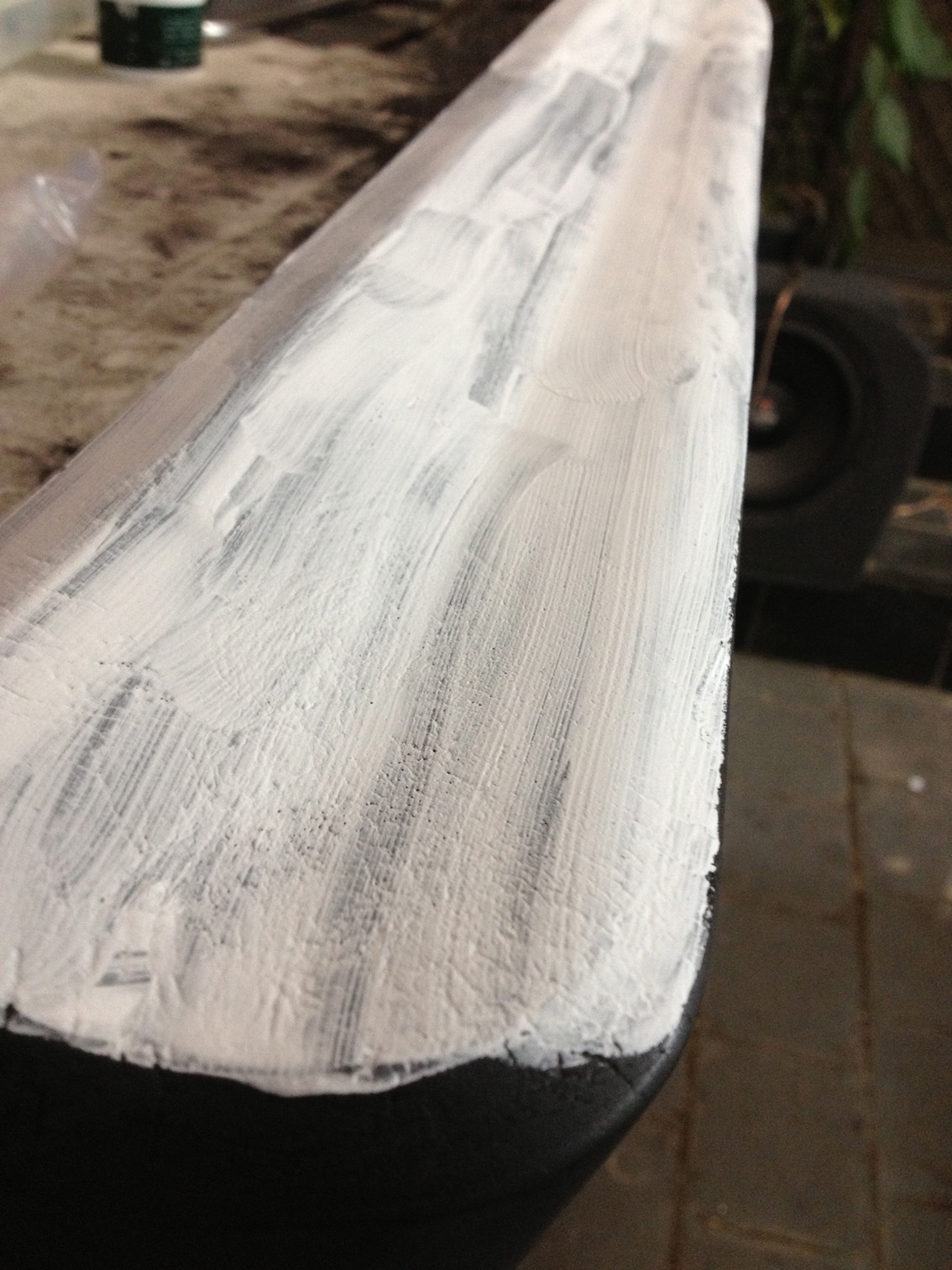 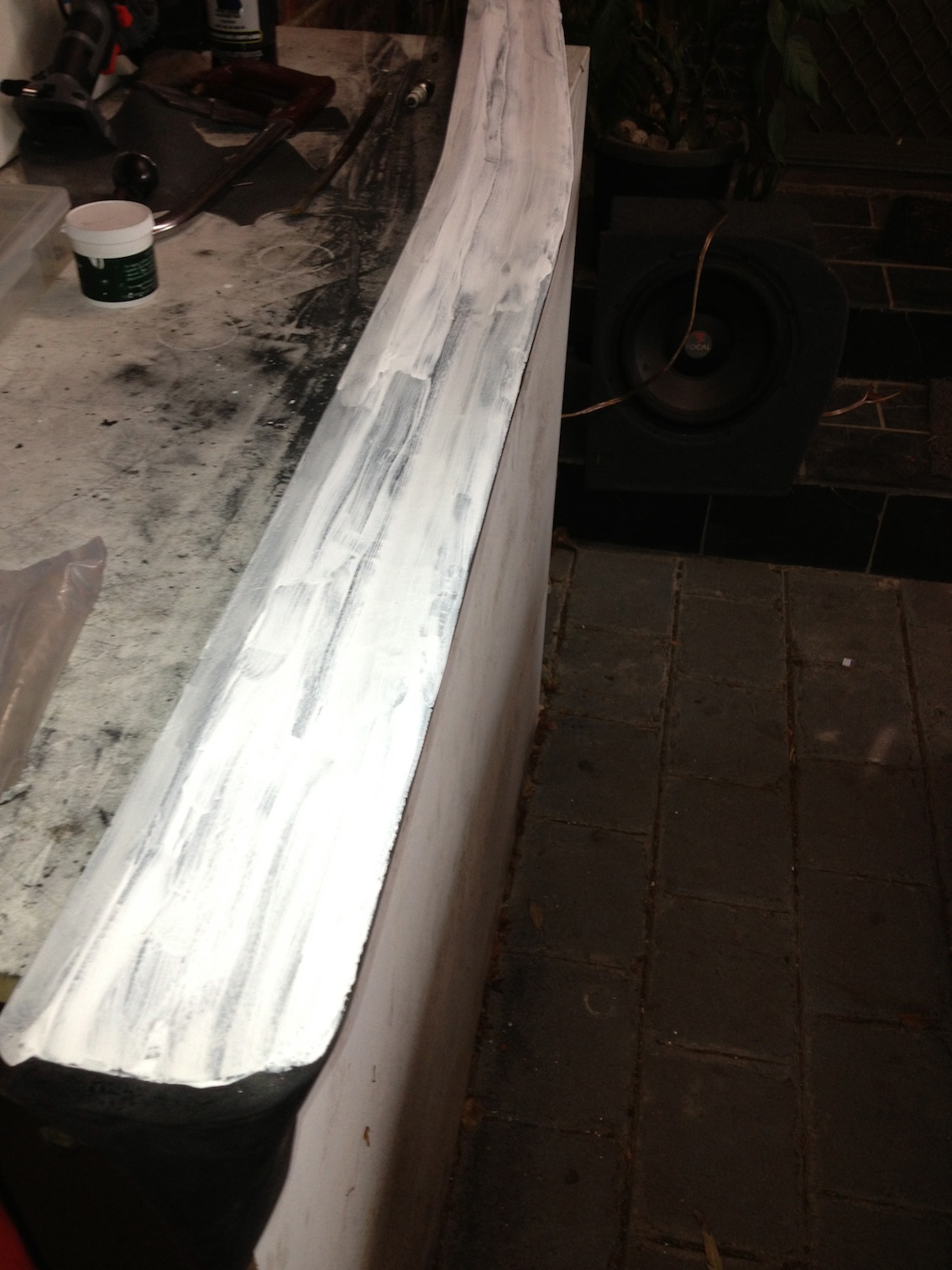 *Note that it is imperative you do not flex the rubber too much with the filler applied thick, as it will crack and you'll need to sand back and repeat. It would be a good idea to secure the spoiler on some stands throughout the entire process, as at one point over night the wind blew it off the table I'd had it resting on, and I had to re-fill and sand a few sections where the filler had cracked*

Beginning with 240, I worked my way up to 800 dry, and cleaned the surface well with water. Leatherique is water based, so be mindful to not let the water soak. I am sure there would be other chemical cleaners such as prepsol that could work, however I played it safe given the rubber surface is venerable to chemicals, so do your own research.

For the top coat of paint, after much deliberation, I decided to try PlastiDip. I work for an automotive panel shop, and spoke with a few of the painters about the best product to use, but opinions were varied. It's difficult to find a flex additive for automotive paint that would be compatible for rubber, so after doing some research I figured I'd give PlastiDip a go.

I applied as per the cans recommendations , 8-10 inches from the surface, constantly moving with fast sweeps. 30 minutes between coats, and I applied 5 coats in all. I was concerned at first as it comes out of the can quite clumpy, however as it's designed to virtually shrink wrap as it dries, each coat became progressively smoother. As with the filler, the surface soaked in the first 2 coats, but after building it up a bit, i'm quite pleased with the final finish.

Here is the final result: 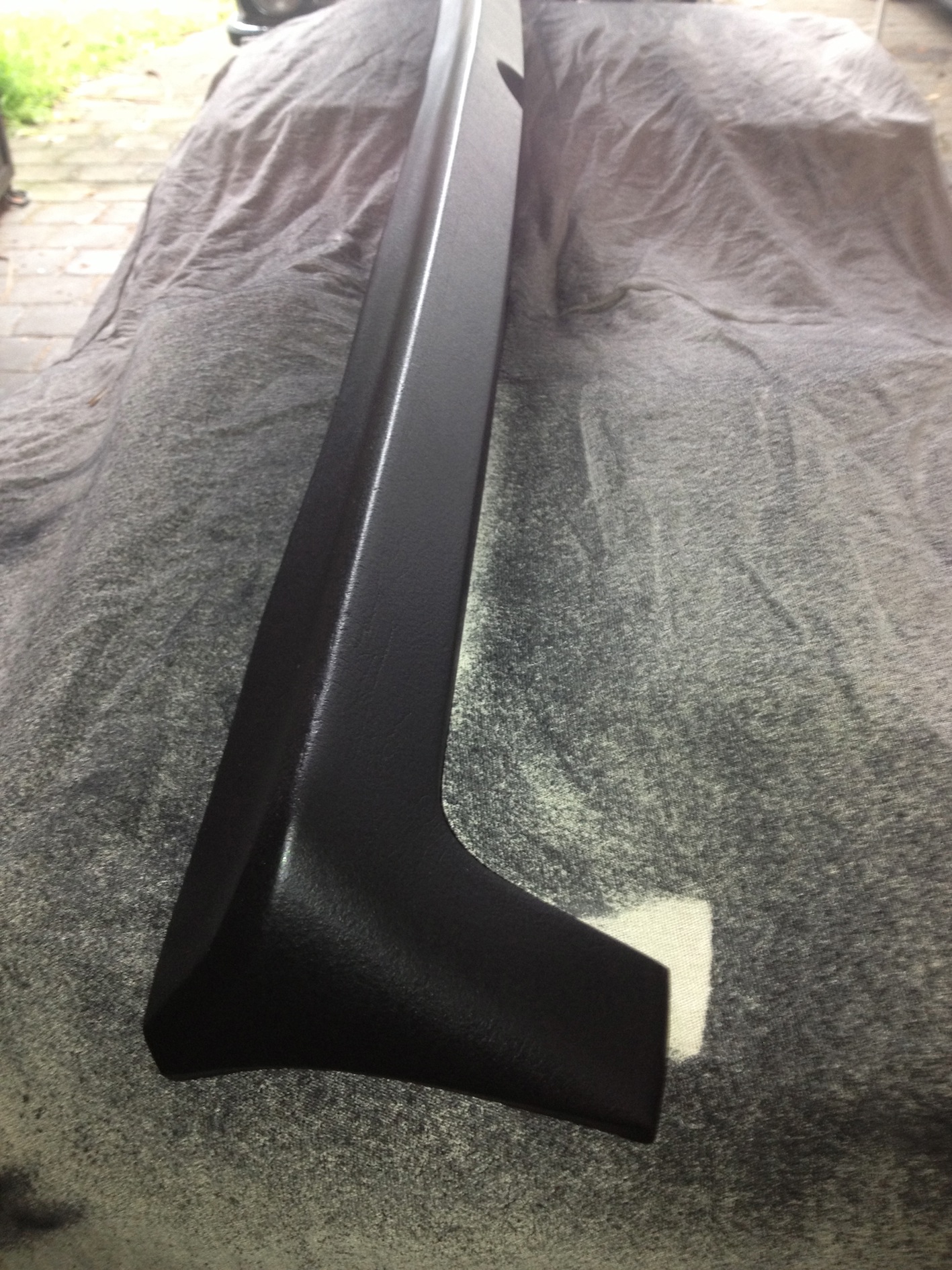 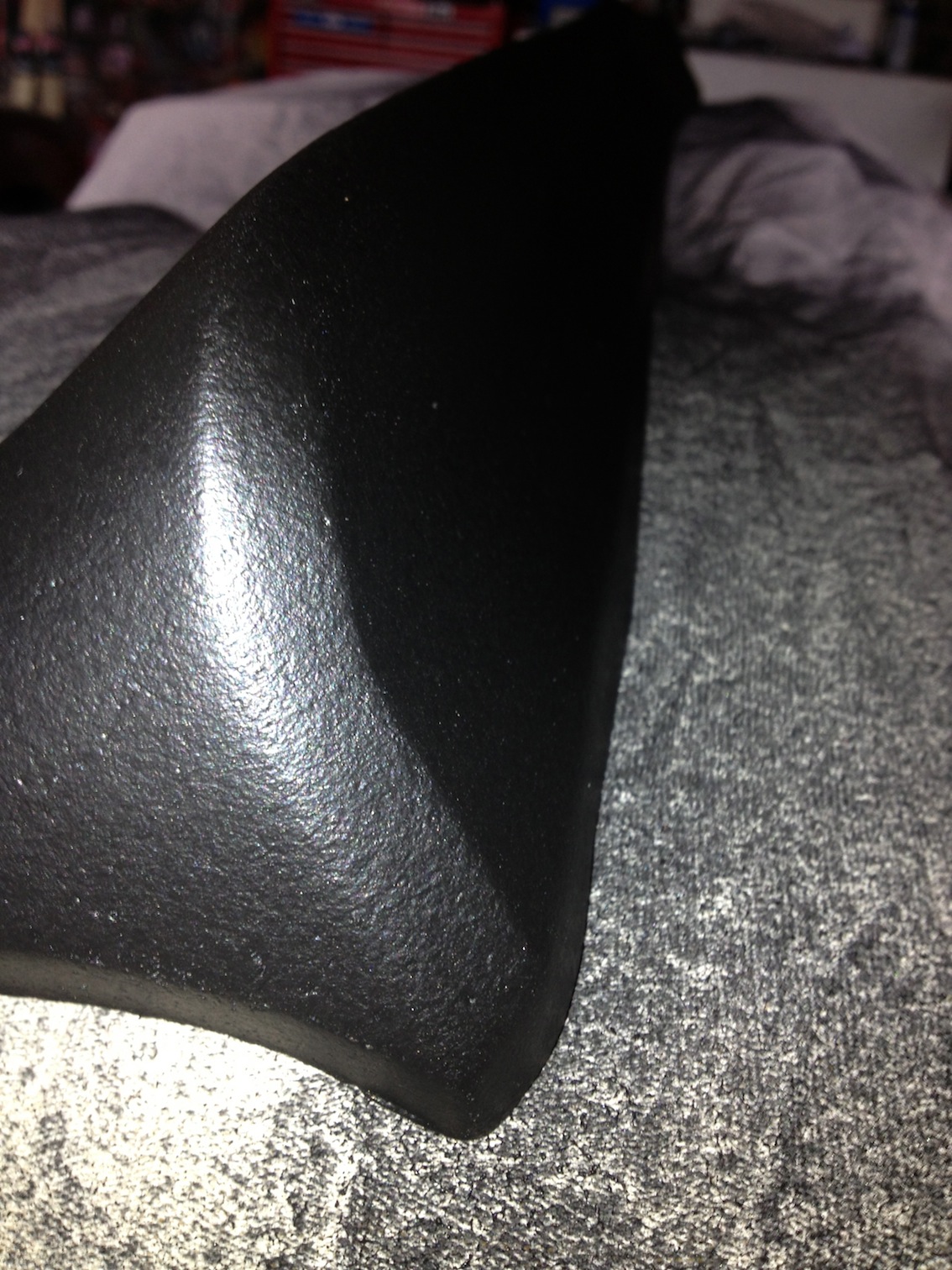 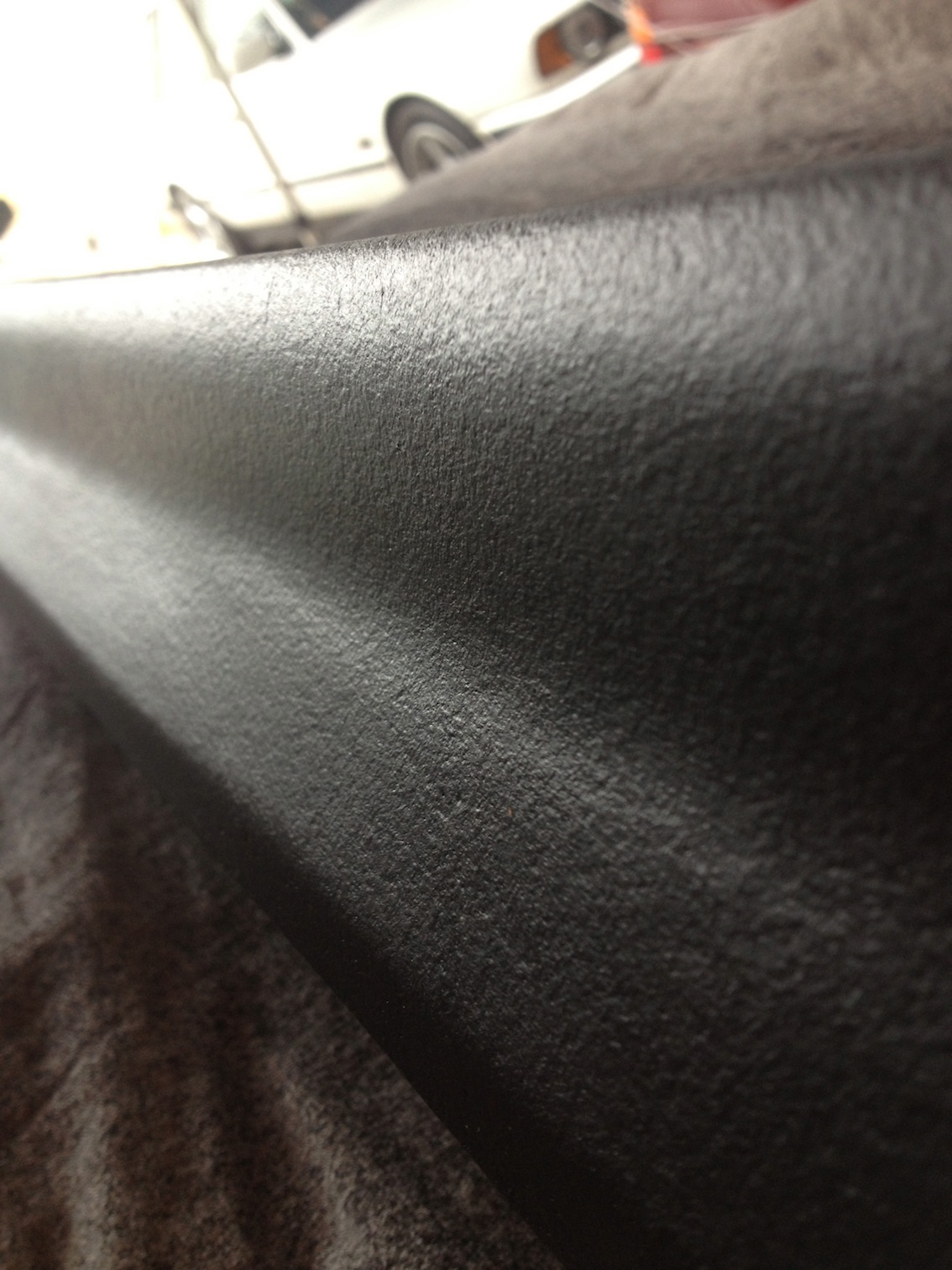 As you can tell, it's evenly textured differently to the original smooth factory finish of the spoiler, however in comparison to what it looked like before, i'd say this is a victory. If I had my time again, i'd purchase the PlastiDip in the tin, and use a professional spray gun to apply it using 10 or so thinner coats to obtain a smooth finish, although I'm certainly not complaining. Some really small sections on the underside show signs of it not being applied as thick, so be sure you get all the nooks and crannies covered well as it needs to seal the crack filler.

I'm curious to see how well it's going to hold up in our summer climate, so I'll update the thread if it begins to show signs of failure, concern or (fingers crossed) longevity.

Great work. Hope it lives up to expectations!
Top

I dunno how long it will last, but it looks great from here. Nice work!
Top

Nice work. I'm about to do my spoiler as well and this will definitely be my guide. Just out of curiosity, have you tried sanding the final coat with 400 or 600 grit?
Top

Haha. Guess summer is right around the corner for you...

Great job, thanks for the follow-up AND write-up.

867535i wrote:Nice work. I'm about to do my spoiler as well and this will definitely be my guide. Just out of curiosity, have you tried sanding the final coat with 400 or 600 grit?

It will peel off if you try to sand it. My friend did the same restoration on his E24 Alpina spoiler and it still looks great after a few years. The only difference is he used SEM trim paint on the spoiler instead of plastidip.
Top

clongo wrote:It will peel off if you try to sand it. My friend did the same restoration on his E24 Alpina spoiler and it still looks great after a few years. The only difference is he used SEM trim paint on the spoiler instead of plastidip.

I used some SEM flexible bumper coating on mine and it held up well, although it was showing some very small cracks after 6 or 8 years or so. Cracks in the coating I think, not the rubber itself. But it really dressed it up, though mine wasn't in as poor shape as the OPs.
Top

clongo wrote:It will peel off if you try to sand it. My friend did the same restoration on his E24 Alpina spoiler and it still looks great after a few years. The only difference is he used SEM trim paint on the spoiler instead of plastidip.

I used some SEM flexible bumper coating on mine and it held up well, although it was showing some very small cracks after 6 or 8 years or so. Cracks in the coating I think, not the rubber itself. But it really dressed it up, though mine wasn't in as poor shape as the OPs.

I was thinking about trying that product, too, but had heard mixed results on longevity. The bonus of plastidip is that it's virtually more flexible than the spoiler, so I won't have to worry about cracks, plus it hides minor imperfections quite well. If the PlastiDip fails and starts to peel, i'll give the SEM a shot.
Top

My understanding is that the more coats, the smoother it gets.
Top

Plasti-Dip when used properly is a good product. I used it on my rockers because it seemed like it would stand up to the road debris better than a harder paint. It has worn very well over the past 4 years.


Great use for it on the spoiler and a nice write-up.

Wow that does look very nice. Can't wait to see it installed!

Also, I like the idea of doing the rockers in plastic dip. I just might have myself a project for this coming weekend...
Top

Great job... thanks for sharing.

I'll be giving that a try on a spoiler or two in the future.

Thanks. It's a whole lot better than it was, but I'll probably go back and give it another few coats this weekend to smoothen it out.


The rocker idea is a good one, I may give that a go too.
Top

As I'm in the process of refinishing the correct Hartge bootlid spoiler for my car now, I thought I'd give an update on how the plasti dipped Alpina spoiler has held up.

After 2 summers, it's beginning to show minor signs of wear, but purely cosmetic. The finish is still decent, no peeling or cracks, but the colour has begun to slightly fade in a few spots (more of a matte finish than satin) and the texture is becoming a little more aggressive in places due likely to the severe UV we have here during summer. Keeping in mind also that the car is a fair weather weekender and is kept in a garage, so doesn't see a great deal of sun and weather. In hindsight it'd have been advantageous of me to apply two or three more coats than I did, as I suspect the areas of concern are places where I wasn't even with my application of the product and it's a bit thin overall. It still looks very good, and I'd happily use the product again but would vary my application technique the second time around to thicker coats and use of a proper paint gun as apposed to the rattle can. The slight colour and texture variations can be seen in these photos. 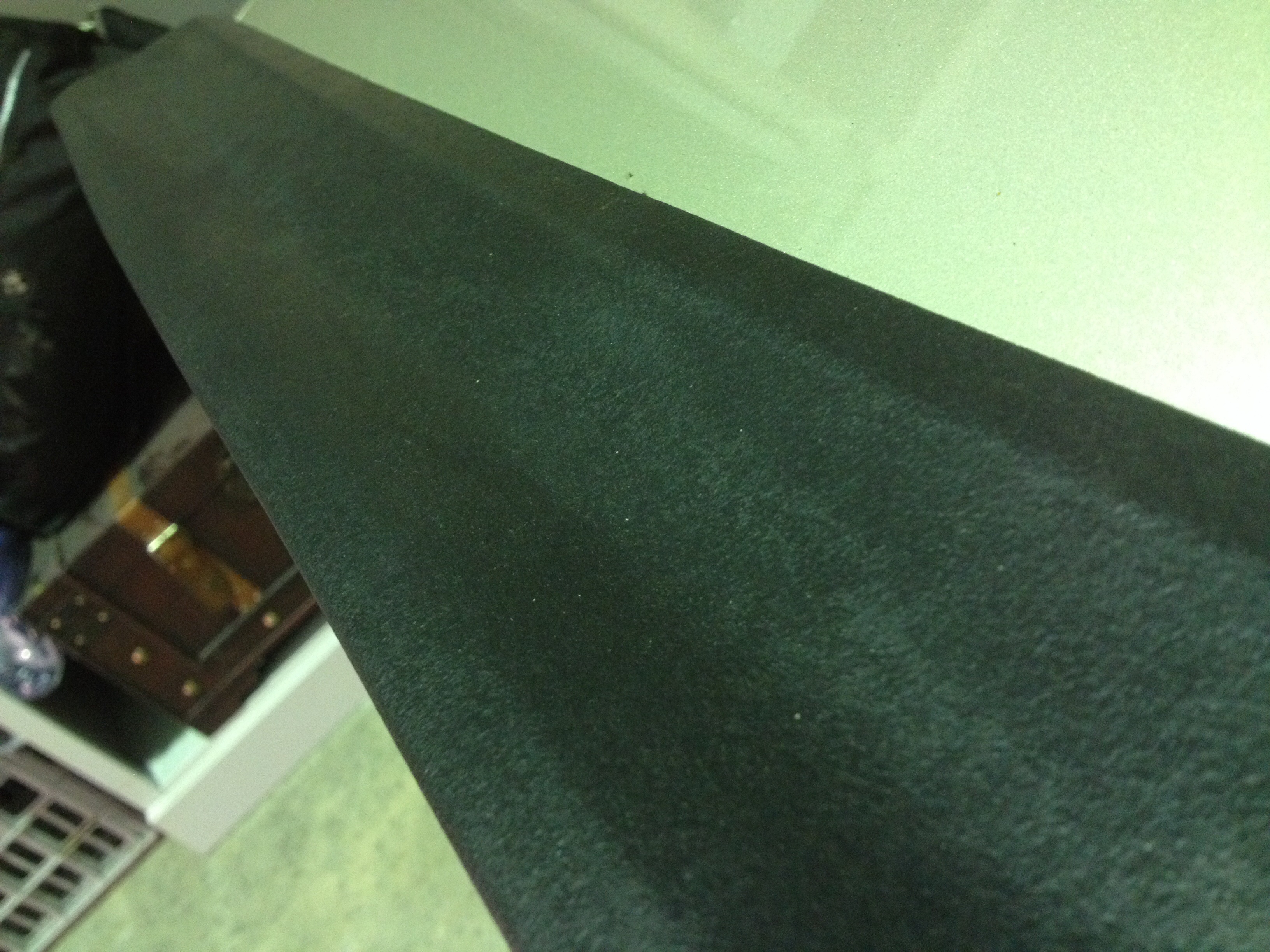 I'll be trying either duplicolor or SEM flexi trim paint on the Hartge spoiler (depending on what's available locally) and will document the results and longevity of that finish as an alternative to the plastidip method.
Top

Thanks for the update.
I referred to your original post prior to refinishing my rubber oem spoiler using just PlastiDip--first 7 coats of black, followed by a few coats of "Glossifier".
check it out:
http://www.mye28.com/viewtopic.php?t=124251&highlight=
Top

Stumbled across this thread as I'm looking to do the same...

Looks beautiful. Curious, how did this end up holding up?
Top

shabazz1987 wrote:Stumbled across this thread as I'm looking to do the same...

Looks beautiful. Curious, how did this end up holding up?

I sold the spoiler shortly after the last update, so no further information on its longevity I'm afraid.
Top

shabazz1987 wrote:Stumbled across this thread as I'm looking to do the same...

Looks beautiful. Curious, how did this end up holding up?

Thanks for unearthing this thread. I learned something.
Top
Post Reply
21 posts • Page 1 of 1