Just catching up.
Great work and attention to detail.
I own some pretty cool BMW's but Black Betty is my fav and may be the fastest too!

You're giving me motivation to change my avatar ... Anna just got her congressional nomination!
Top

Can't wait to see it at the Sheraton for the next SandyEggo day!
Top

Yeah, I can't wait to get this thing on the road! And in that sense, having SPD '21 canceled was a blessing in disguise - no disappointment about not having this done by March.
Top

Yeah, I can't wait to get this thing on the road! And in that sense, having SPD '21 canceled was a blessing in disguise - no disappointment about not having this done by March.

But maybe by Nov. 1 for SoCal Vintage Meet? (here in LA)

I feel the same way about not having my new interior done by March also.
Top

Yeah, I can't wait to get this thing on the road! And in that sense, having SPD '21 canceled was a blessing in disguise - no disappointment about not having this done by March.

But maybe by Nov. 1 for SoCal Vintage Meet? (here in LA)

I feel the same way about not having my new interior done by March also.

Overdue for an update. The rate of progress really seems to be picking up and there's lots to report.

Right now, everything I'm doing is geared at getting the motor back in ASAP. To get the motor in, I want to have all the cooling system hoses and AC lines that go through the firewall back in (once the motor is in, getting those parts installed would be near impossible). Getting all those hoses & lines back in means having to get the heater core & AC evaporator boxes back in. Getting those boxes back in means putting the carpet back in. Putting the carpet back in ... well, you get the idea. It all started to feel like a pretty long & complicated task, so to keep me on task (so to speak), I did this to-do list that was intended to be in order of what needs to get done first to last. Since doing this list, I've modified my strategy a bit, but more on that later. Cleaning up and checking the wiring felt like the elephant in the room for me. When I took the car apart, what I found in the electrical system was a combination of prior bad stereo installations (probably multiple), a Viper installation and incorrect connections in the fuse block. The result of that was that I had anxiety about whether the wiring in my car would match the wiring diagram, and that I'd end up with a bunch of gremlins that would be super hard to diagnose & correct once the car was back together. So my plan was to test all the fuse pin connections to as many of the "fused components" as I could; e.g., test continuity from the radio power supply fuse to the radio power supply end-point, etc. All of that seemed to check out, though I had a moment of panic when all the side make lights were indicating that they were shorted out to ground. It took me a while to figure out that the bulbs were installed in the taillights and were in fact grounding the system out.

Here's before view under the dash: And here's a pic from when I was nearly done. Any harnesses I found where the tape wrap had c one loose or was disintegrating got re-wrapped with Tessa high temp tape. I've come to the conclusion that most of the gray dust & dry powdery grim in all the interior nooks & crannies is disintegrated harness wrapping. The wrap on all the big main harnesses behind the cluster all disintegrated at my touch, and in clear sunlight you can see all the dust cascading down as you remove the tape fragments. In that pic above, I've steam cleaned, used compressed air and vacuumed as much as I Gould get to. If nothing else, it smells so much nicer & cleaner!

I also (nearly) finished refurbishing the evap box. Before: The only thing I'm not happy with is that the "O" ring kit I bought didn't have a small enough one to seal the small pipe on the expansion valve, so I reused the old one. Not a day later I found a better kit and ordered it. So, unfortunately, before the evap box goes back in, I'll have to disassemble and re-do one of the connections. I also discovered that one of the new Knipex needle nose pliers (angled jaw, slightly flattened tips) worked perfectly to straighten all the bent aluminum fins.

And this one is a bit geeky, but given the amount of damage by the battery box where it looked like battery fluid had leaked out, I was particularly motivated to replace the fuel pump cover gasket on the trunk floor. That part is NLA, and my old was was ruined. So, I took two sheets of that thin foam, stuck them together, and build this round cutter: I cut the outside edge first, then the inside, then used Rotabroach to cut the bolt holes. Result (before the bolt holes were cut): New stickers arrived. Most of them were from Pukar Designs, but he sent the wrong paint code sticker, so I actually had to design my own in Adobe Illustrator and get it printed up. "But wait!" you say, "Aren't there plenty of other places to buy BMW paint code stickers?!?" Well, lots of places on eBay and Etsy appear to sell them, but they were all incorrect ... wrong size, wrong color, wrong font, wrong orientation, no part numbers, etc. I finally found one of the Etsy sellers who was fine printing up my design. I've no also got the doors mostly reassembled, including the trim, glass & handles. This is starting to make my collection of parts look a bit more like an actual car. Most of the trip clips are new. (For some idiotic reason, I only ordered 25 new clips when I actually needed a total of closer to 36, so I had to reuse some of the old ones.) I also used the 3M strip caulk under the aluminum trip to replace the old white putty that had been removed. The 3M stuff is a bit stickier, so removal will take a bit of care if I ever have to do that. And now one of the small victories that I'm particularly excited about. One challenge I knew I was going to have to deal with with how to attach the Euro M88 headers (with their 3-bolt flakes) to the US-spec cat section (with their 2-bolt flanges). As it's been explained to me, the usual solution when installing euro headers is to cut the 2-bolt flanges off of the US exhaust manifolds and then onto the euro headers. I didn't want to do that juuuuust in case I had smog emissions certification issues and had to go back to the US manifolds. Unfortunately, I couldn't find a set of aftermarket flanges that seemed to have the right specs without going to some of those klugy "universal" flanges that have the elongated bolt holes.

So, I designed my own and had it fabbed! I used a company called Oshcut.com. Design your part in AI, upload the cutting diagram, specify your material, and they'll cut it using a laser CNC machine. This service is limited to cutting out of a sheet and bending, but this was plenty for what I needed. First I drew the part on AI, printed it out in paper, confirmed that the paper part fit onto the US flanges, then had Oshcut cut the part & send them to me. This basically didn't take any longer than it would have if Summet Racing actually had the part in stock. I was pretty amazed. Under the "measure twice, cut once" principal, I haven't cut the euro headers yet. 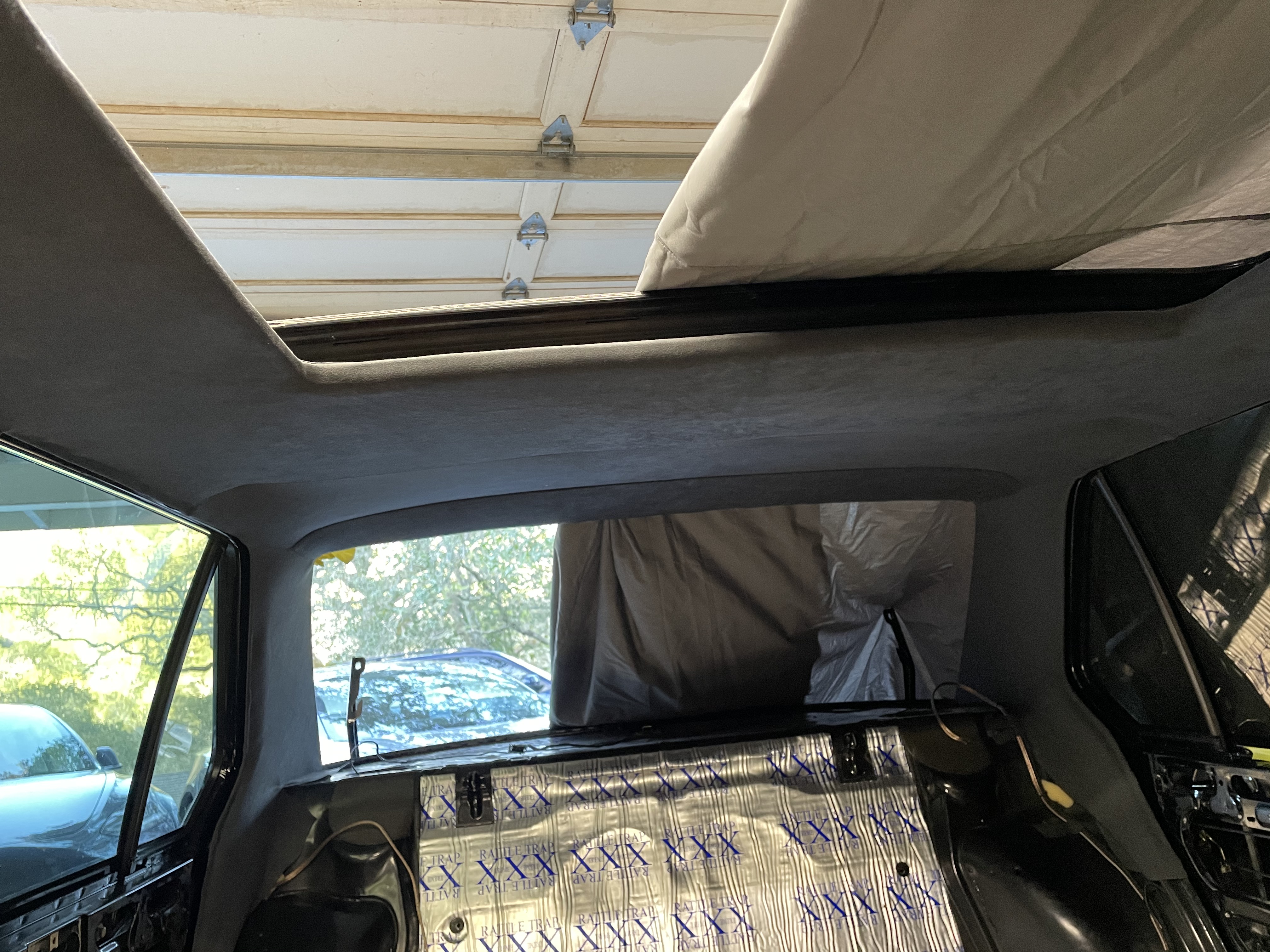 Making progress on the "pre-install checklist" to install the motor: One note - I've ticked off the "install moonroof" item, but I didn't actually install the moonroof. I thought (naively) that because I have an original BMW moonroof that installing it would be very plug-n-play. I had previously read (though it was a long time ago and even then I hadn't read very carefully) JBORT's instructions on how to install the Saab moonroof. Well, I didn't have a Saab moonroof, did I? So naturally, the BMW version would be hella easy.

Well, based on a couple other threads here on the forum, I came to realize that I'd have to modify a couple parts. Still relatively easy, but without ready access to spares, I decided I could do without the moonroof. So, anyhow, the original sunroof is reinstalled.

On a more constructive note, I got the 2-bolt flanges welded on to the modified euro M88 headers and I'm very happy with the results!

To recap, I built a jig to hold the original manifolds, then mounted the headers in the jig to mark where to cut the pipes. I also had a pair of 2-bolt flanges fabricated in mild steel.

Next step: slide the flanges onto the headers, mount the headers on the motor, drop the motor onto the mounts in the engine bay & attach the tranny & tranny mount. With that done, the ends of the headers would be positioned under the car exactly where they will be sitting when everything gets put back together. Next, I installed the cat section and the resonator exhaust section. That step locates the flanges for the cat intake side. The headers lined up to the cats pretty well. Then I bolted them together, tacked the 2-bolt flanges to the headers ... and then dropped the tranny, pulled the motor, removed the headers and welded up the flanges. It actually went pretty well and took a lot less time than I was anticipating. 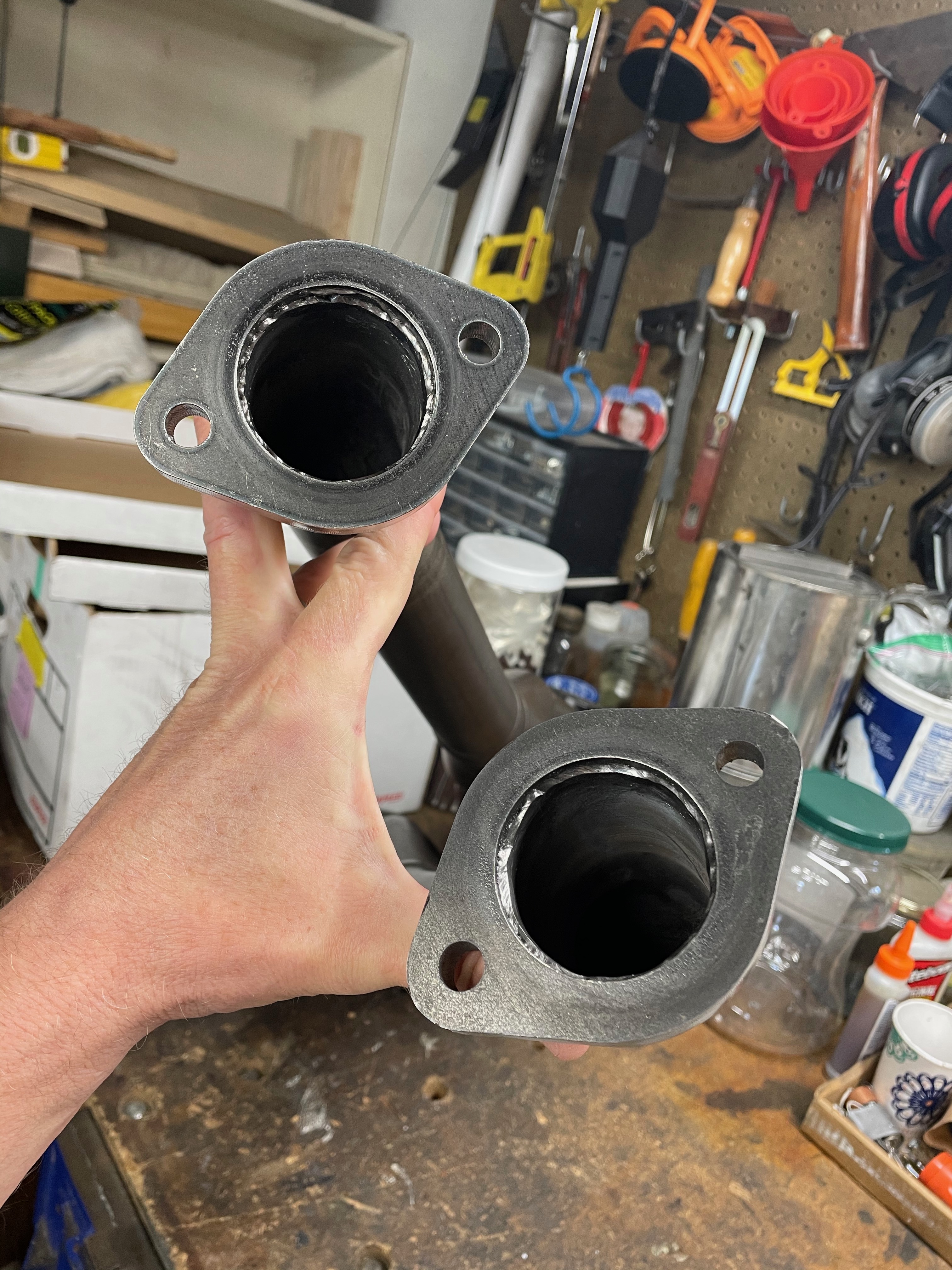 While I had the cat section in there, I also repaired the tranny-to-exhaust brace. This is the plate that attaches to the underside of the tranny & bridges over to a tab on the cat section. Here's a pic of what it's supposed to look like (not my pic, this is from a BaT auction): In my case, the end of the tranny brace was cut off, and the tab on the cat section was likewise mostly cut off. I tabbed an "L" bracket for the tranny brace and a new tab for the cat section and tacked them in place while everything was still installed on the car. I painted all the new parts with some high-temp exhaust pipe paint. Not as elegant as the yellow zinc (hidden under the paper wrapping), but it suits me fine at this point. That big tear in the shroud is bugging me. Not sure yet how to address that.
Top