How to verify the TDC mark on the harmonic balancer

How to verify the TDC mark on the harmonic balancer

The following method of verifying the TDC on the harmonic balancer was explained to me by Paul Burke over the phone.

Because the harmonic balancer (HB) is from a E34 and the pistons are JE and not OEM, Paul wanted me to verify the TDC mark. Here is how I did it and what I found.

First of all, I thought about using a dial indicator.

Only problem is, the piston is at TDC for longer than a set point. You can actually move the HB while the dial indicator is 0 ed out. This is caused by the clearance stacking and the fact that it takes several degrees of rotation for the rod to go over center. (Clearance stacking is the result of the wrist pin to wrist pin bushing, and rod to crank clearances) So that was a no go.

First, buy some big ass washers and bolt them in opposite corners to the block. Make sure the block is clean and scraped with a razor blade. 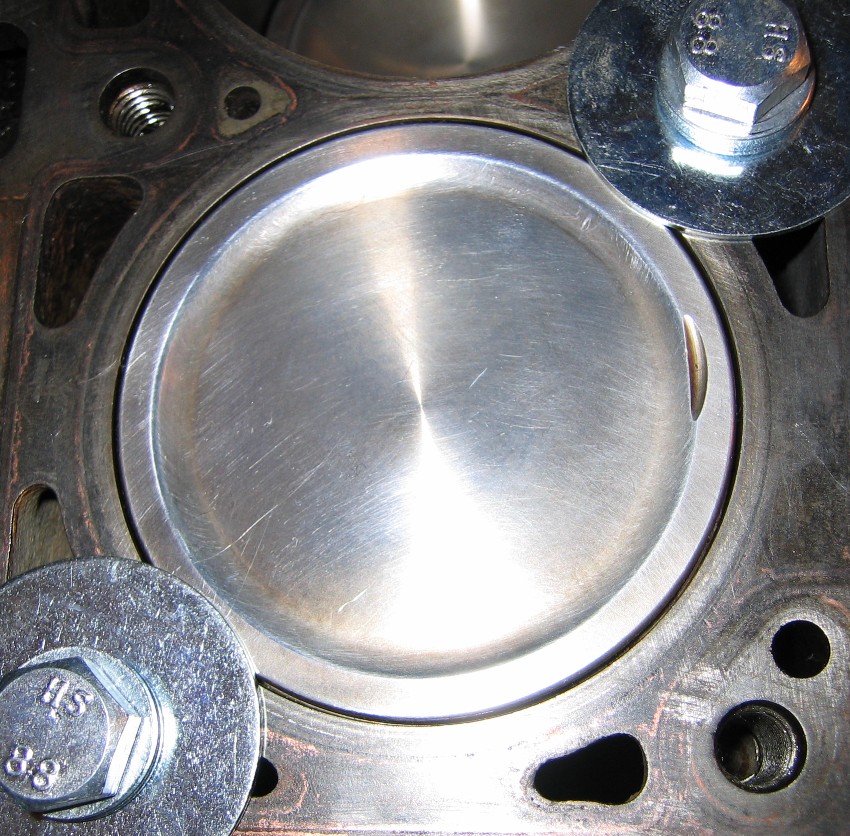 Now I was hoping that these washers would act as a stop but they did not. The piston can easily bend them up on its way to TDC. So I used a .005 feeler gauge to continuously check the gap as I very slowly moved the piston towards the washers. 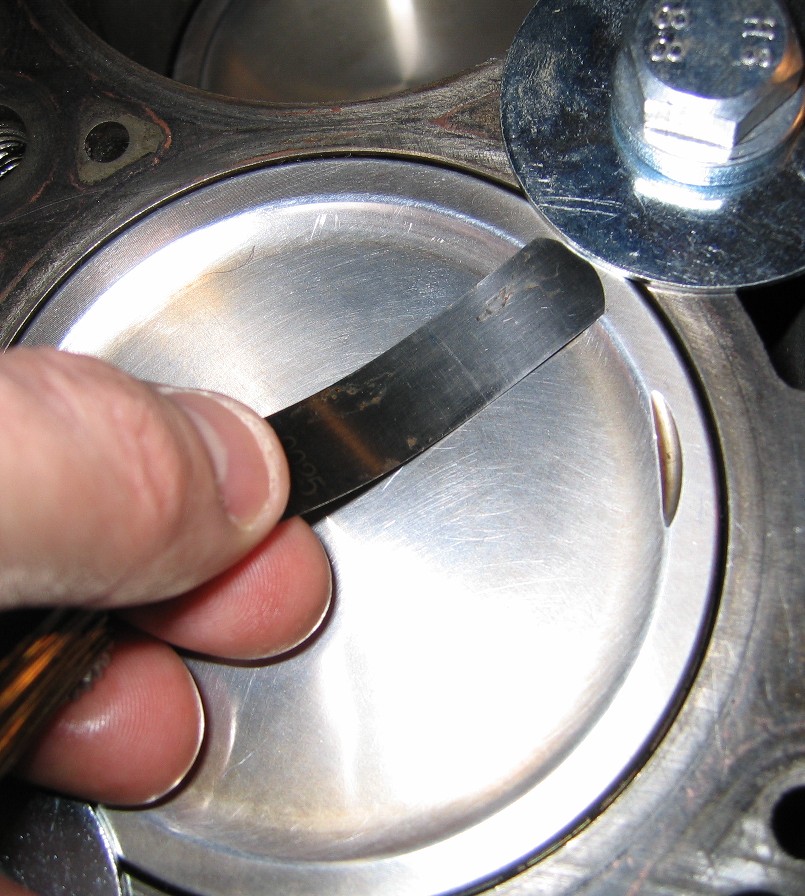 Once the gap was closed I made a mark on the HB. I then turned the HB so the piston was touching the washers from the other direction. I marked that spot on the HB too. 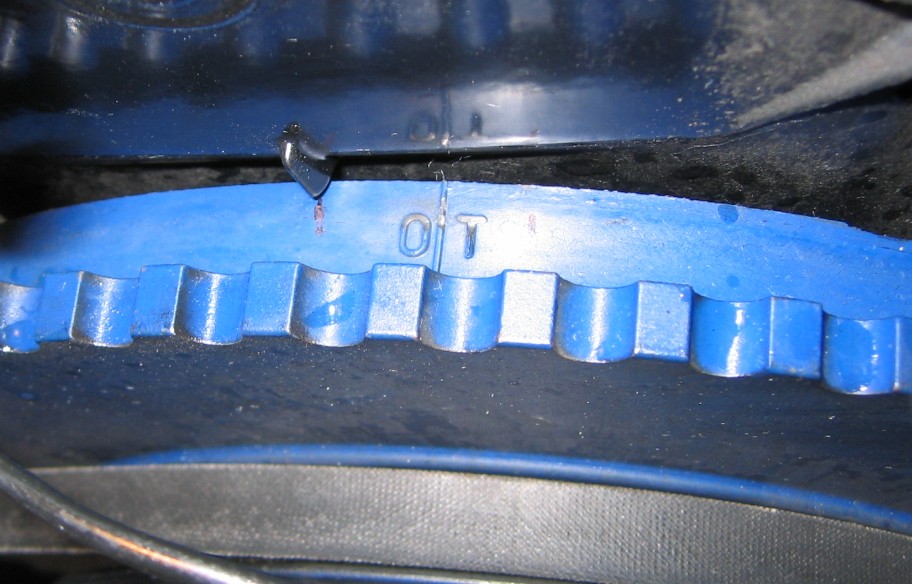 So if the OIT mark on the HB is correct, the distance from the factory mark to the marks I made on the HB should be the same on either side. 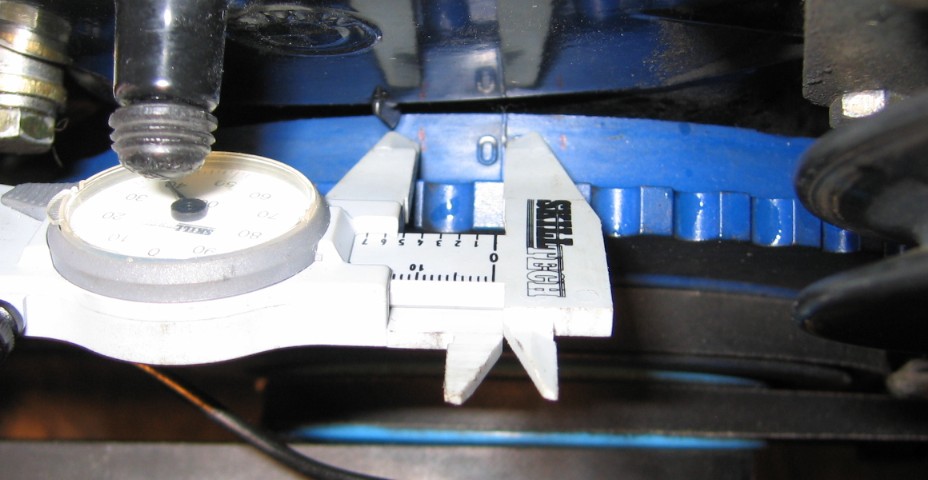 
Rich Euro M5 wrote: This is the correct way to determine where TDC is located using a piston stop. Regardless of whether the wrist pin is on center or offset, there is always a area of several degrees in crank rotation at TDC where the piston isn't moving up or down. This is caused by the clearance stacking and the fact that it takes several degrees of rotation for the rod to go over center. (Clearance stacking is the result of the wrist pin to wrist pin bushing, and rod to crank clearances) If this stacking error didn't exist, you wouldn't be able to turn the engine over, it would be bound up tight with 0 clearances.

When you degree the cam to the crank you don't want to use the factory marks anyway. You should be using a calibrated degree wheel bolted to the harmonic balancer. You should also fabricate a pointer from piano wire. You will also need to fabricate a piston stop from an old spark plug. You need to do this to verify your degree wheel/pointer is set exactly at TDC after you've assembled the head to the engine. (You won't be able to leave the rig on the engine during assembly) This allows you to move the pointer to match up with the 0 degree mark on the degree wheel. When you degree the cam you'll need the mount and dial indicator. The tip of the dial indicator will be setup to ride directly on the cam lobe of the #1 intake or exhaust valve. The engine is only turned over in the running direction of rotation, you set the cam per the manufacturer's specification sheet. ( This is typically done using an offset button, but since Duke will have a adjustable cam gear he's set) If you don't have the spec sheet, you'll have to fully degree the cam for intake and exhaust and run a few simple calculations to determine the actual cam specs. Then go from there.

Devinder wrote:You're still too close to the slop point. I was getting the same results on my engine until I went down about 1/4". Not saying your mark isnt off but it's hard to tell with a few thousands piston travel. I mounted a piece of thick bar stock in those same head bolt holes and tapped the middle of it for a bolt to limit piston travel.

That's the way I've always heard it should be done. At TDC movement of the crank with respect to piston movement is too large.

stuartinmn wrote:My concern would be if the outer section of the harmonic balancer has slipped so it's now a couple degrees off, it may a sign that 1) it will continue to move around, making any corrected marks inaccurate as well, or 2) it's on the road to failure and may come apart altogether.

I think it would be a good idea to simply check the TDC mark as Duke did any time the head is off the engine. This will tell you if the outer ring of the balancer is in fact starting to slip.