Somebody's got some photo skills.
Both those pics are stunning.
Top

1st 5er wrote:Somebody's got some photo skills.
Both those pics are stunning.

I would say ALL three of those pics are stunning!!
Top

This picture is from this past August when my wife and I renewed our wedding vows....what you cant see is number 8 is on the way!!!

guess I should be proper and do the username to the name to the face thing.

Name is Tyler, username comes from when I was a bike messenger and I rode track bikes that kids called "fixed gear" or "fixies"

Memorial Day a few years ago, maybe 3 or so.

9th place in Chicago IRO sprints 4 years ago or so. 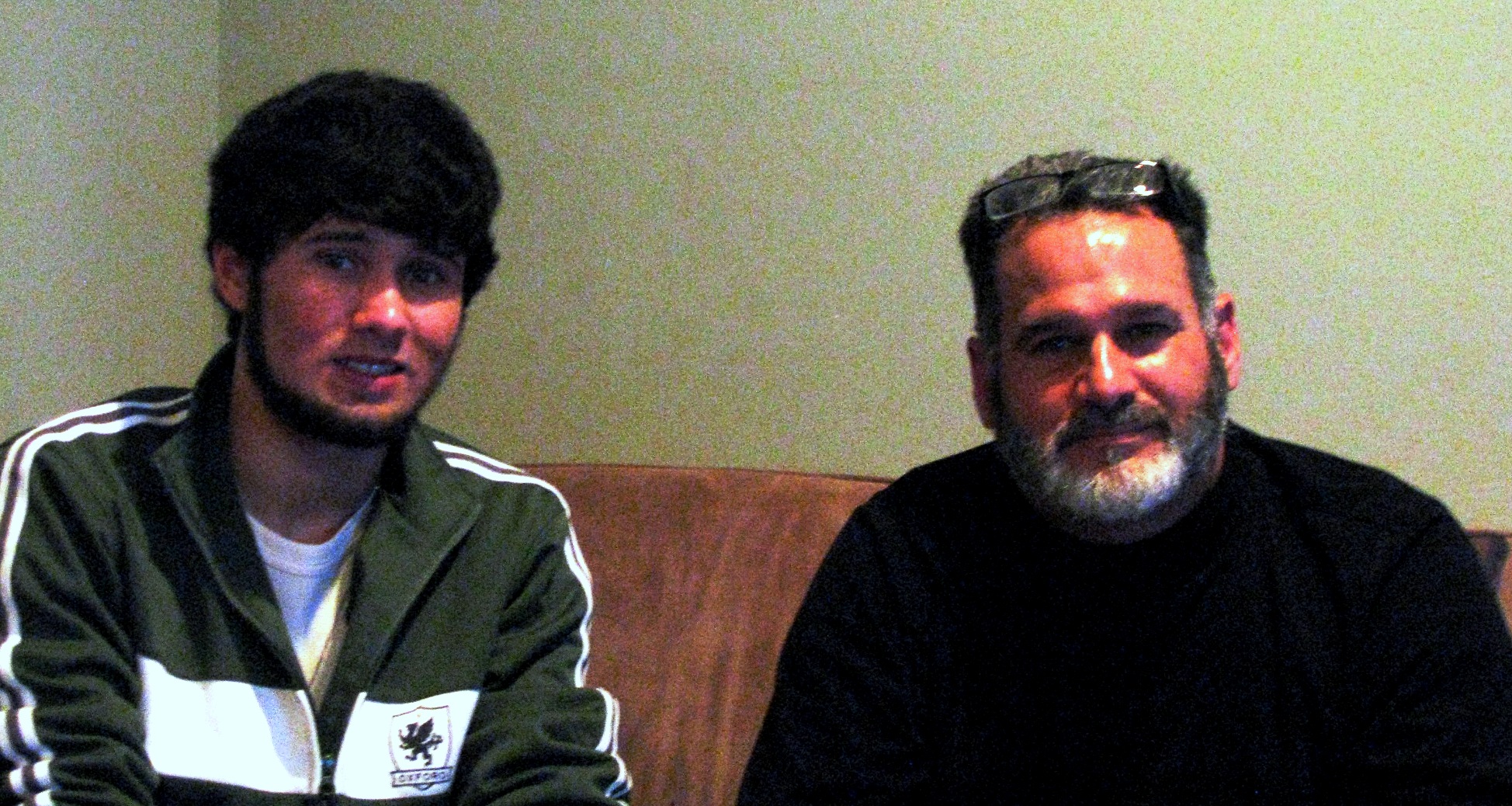 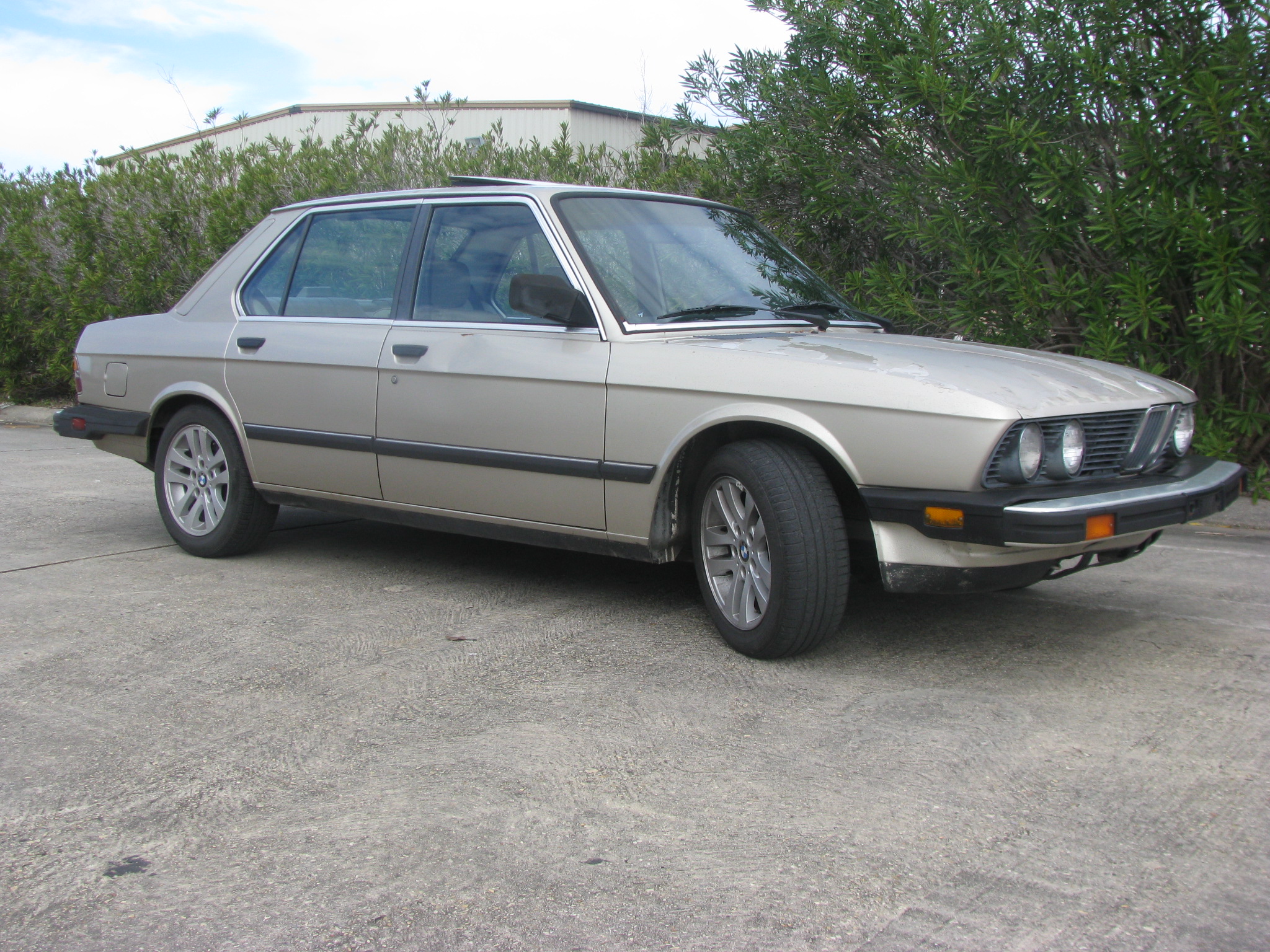 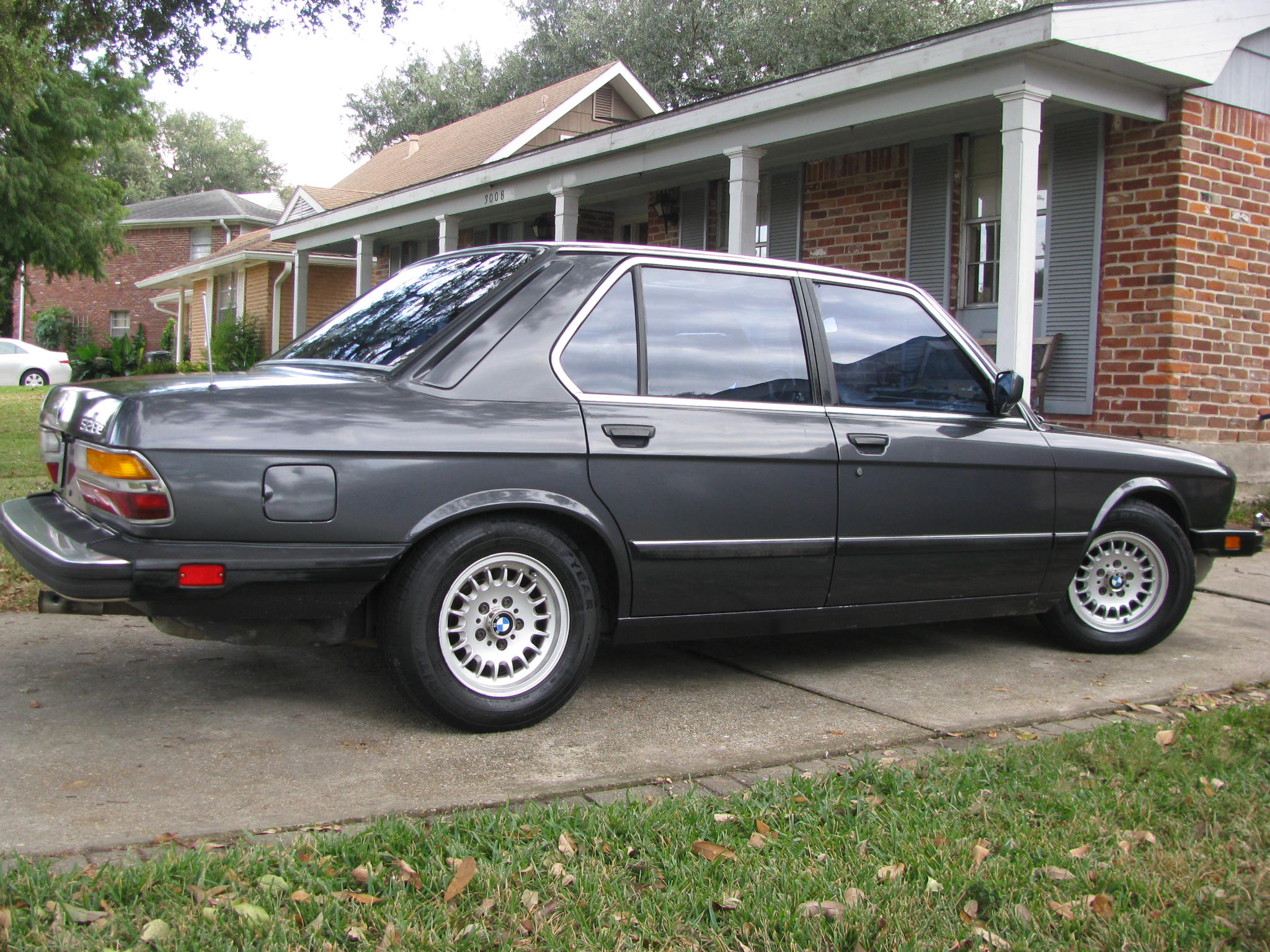 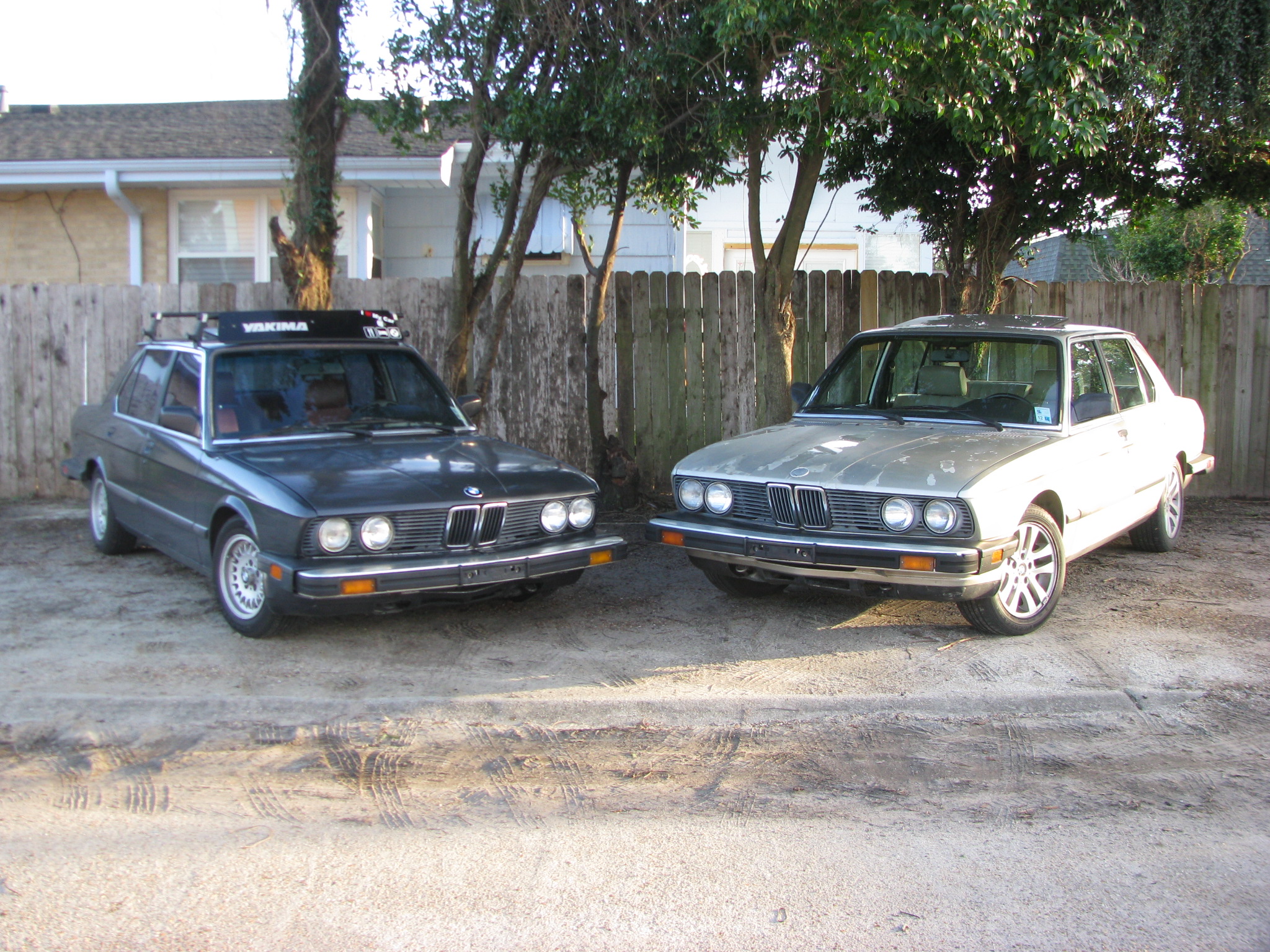 That's my son, SamRSnow. We live just outside of New Orleans. First I bought the grey 528e that he's driving. Then I bought the Bronzit 535i, which I'm driving. He did quite a lot of repairs on my car. I have to give him props for that.
Top

That's my son & me before he left to return to NCSU. He's done the majority of work on the e28. 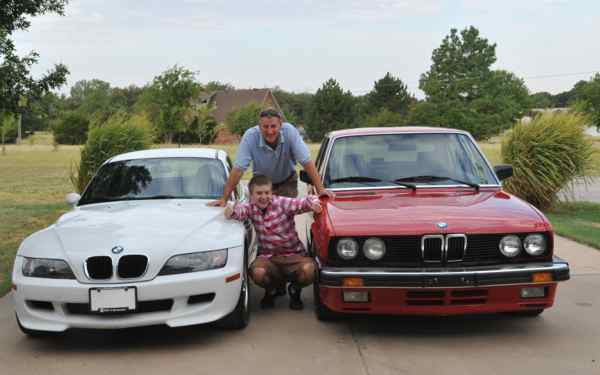 And that's Mama... I haven't figured out why she wears that green life preserver... but, happy wife, happy life. 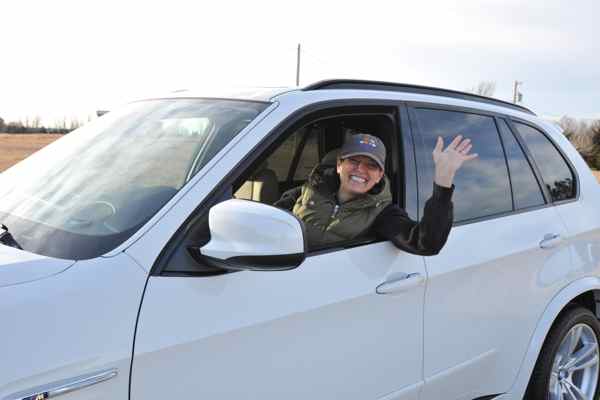 The sickness began way back in 1998. I had bought my '88 Porsche Carrera the year before and it was so special that I simply couldn't use it as a daily driver. I drove it hard, but the Eibach springs were too taught and my wife hated the ride. I hated the automatic transmission. But I loved the E34.

Somehow, this led me to my '95 540 M-Sport, which I purchased from a guy in San Antonio, TX. What a freaking brilliant car. The M-Parallel wheels from the '95 Euro M5 are simply un-matched in their beauty. I loved it so much I dedicated myself to documenting everything I could about these special cars.

But, alas, it was time for something different. I sold the M-Sport and bought a 1978 FJ40 Landcruiser which I spent the next 7 years personally restoring and enjoying. Uglina. www.uglina.com. I'm a bit of a forum rat; you can see how I engaged with the community in restoring Uglina here.

I sold Uglina in February of this year. I had actually already decided I wanted an E28 late last year. I've always loved them. I had a history teacher in high-school who had one. I remember that center-mounted exhaust like it was yesterday.

I've been lurking here and elsewhere learning about the E28 and watching them go by on eBay and BaT. It was only in the last week that my personal situation changed to the point where I could start actively seeking one out.

Today I came to a verbal understanding with a seller of a very special car. I wire him the money tomorrow. I'm not going to disclose any details on the car yet, because I don't want to jinx the sale. Let's just say that it meets my standards for anal-retentiveness.

I'm looking forward to participating on this forum!
Top

Hi, my name is Robert Gibbons.. I'm from Asuncion Paraguay..

I present to you my baby. Restoration of my baby.

Fixing most everything and re-upholstering the seats to create black on cardinal saga. http://www.mye28.com/viewtopic.php?t=110506

Started at Purdue and finished the BSME at San Diego State. Paying for school was a bit of a challenge so I joined the Marines in '82 and juggled active and reserve duty to pay bills and take classes. After the 8yr college tour, Marine OCS being full, I went to Army OCS (1988).

35yrs of running, cycling, triathlons and humping a rucksack have caught up to me. Scar tissue and worn cartilage might mean no more competitive seasons. This pic is from a couple years ago.

A 2010 family pic. Lawyer-chick and the knuckleheads. We are in Savannah, GA. a cute little tourist town on the GA coast. We have the largest historic district in the nation, and the #3 largest St. Patrick's Day drunkfest.

In '06 a neighbor introduced me to tracking a car. My DD at the time was a '91 Porsche 911 Targa (Tiptronic). Trying to handle the car on the ragged edge of control to maximize turn-exit speed was incredible. It was very exciting, tremendously difficult, sometimes terrifying...the greatest fun an American boy could have. I immediately started scheming to swap the Tiptronic car out for a manual because the auto tranny was all the sudden unacceptable. I ended up getting a '99 911 and was doing 4-6 track days/month, throwing thousands of dollars at upgrades, tires and maintenance items every month.

In my first year I did 60 track days. '99 was the first year for Porsche's watercooled engine and it had some known weaknesses. I found one. My aftermarket warranty paid for 2/3rd of the $15k recovery. That motivated me to find a way to make tracking a car affordable. I needed a dedicated inexpensive track car, something with real safety equipment so I could really drive on the edge where all the fun is, and something simple enough that I could learn to do my own wrenching. Who knows, I thought, maybe some day I'd decide to take the next step and go to competition school.

Having owned 2 e30's in Germany I gravitated towards SpecE30 for a track car and bought one in 2007. At 4-6 track days/month, increasingly with "open passing" groups, I was gaining confidence rapidly. To my surprise, in the 3 months it took me to get a SpecE30 I went from "some day I might want to go to comp school" to "comp school next month".

Our Lemons/ChumpCar. An '87 325i on to which I grafted a circletrack car's front end. The paint scheme was the Bimmerworld World Challenge livery that year. It even had the World Challenge windshield banner, courtesy of BW.

I am the reigning SpecE30 champion of engine swapping. I think I'm on #15 now. Nothing like repetition to make a person fast and efficient at a task. Each of those engine failures has their own story. There's an evil shop, a hapless shop, a pro shop w/ a bad valve grinder, an engine builder error, a failed coolant hose, failed oil pressure relieve valve, failed accusump, multiple junkyard "temporary"engines, several engine changes because I was bored, several head refreshes, and somehow it adds up to 15.

2011, the end of #6. That was a hard year. In the spring I spun at CMP's turn 3 and went into a tirewall broadsides. in the Fall I slipped in a Porsche's oil in the braking zone of Road Atlanta's turn 1 and hit a cement wall a glancing blow at >100mph.

Then in Dec11 #6 reached end of life. An e36 lost coolant in front of me at Road Atlanta's S curves and I went into a cement wall at 87mph. Some said it was the hardest hit they recalled in club racing. I came out of it with a cracked rib.

A week after the death of "Old #6" I found an E30 prepped for a different class, and then left outside for the birds to crap on for 2yrs. 3months later "New #6" emerged.

True to form, New #6 went thru 3 engines in it's first 3 months of racing, but in retrospect, I did not give #2 a fair chance by getting it on a dyno.

Becoming an e28 owner. Last year I decided I was bored with the black on tan e36 (328) M3 clone. I wanted a black on cardinal e36M manual sedan. After several failures to close a deal I got a closer look at Savannah996's (Brian Arcudi) e28, a model I'd always admired. I decided that the classic lines of the e28 were "me" so started looking for a good example in either black or dark silver, with the intent to redo the seats in cardinal. And so it began.
Top 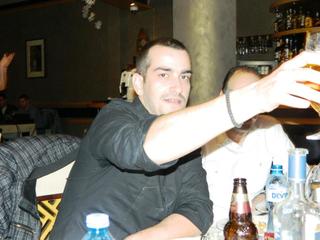 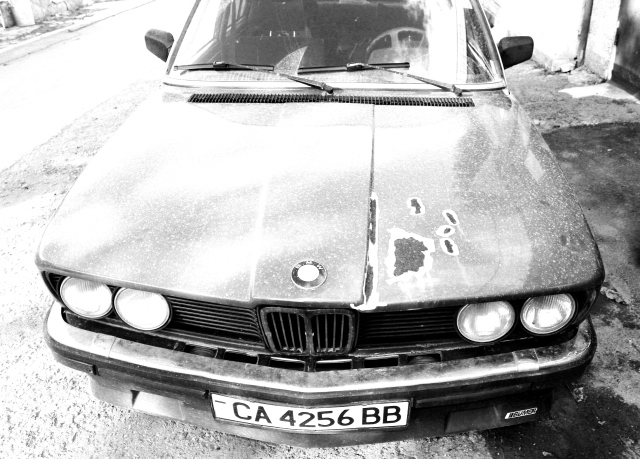 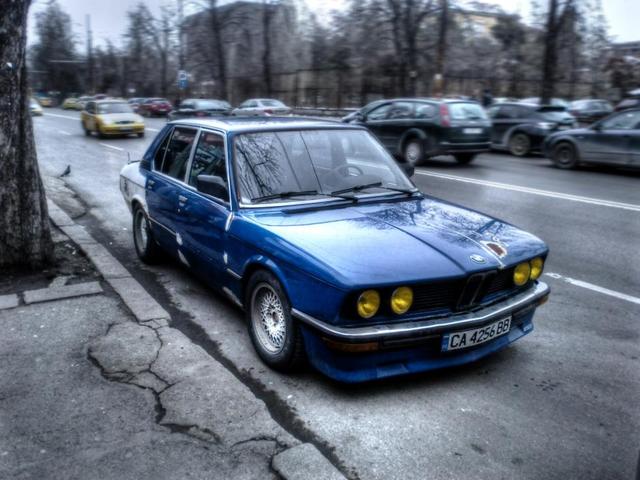 some race experience at classic car racing...a close friend of mine 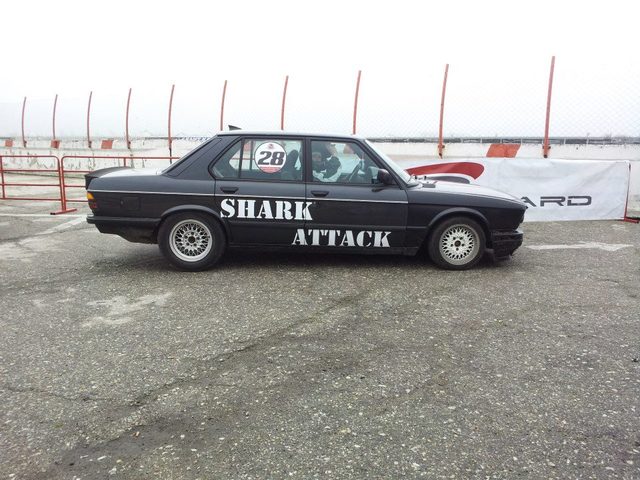 Well, I'm sure you've seen enough of the car so I thought I'd put a face with the name in case you run into me (please not my car) at Vintage! The 3 Hicks will be there once again and this time each bringing his own ride. The shots below are from last year in Old Salem. Good times

me and my bro:

me and my awesome dadI:

Hope to see ya there!
Top

My '85 535i. Since the pic I've installed center caps and tucked the rear bumper.

Hey, I have seen that car before on a different forum 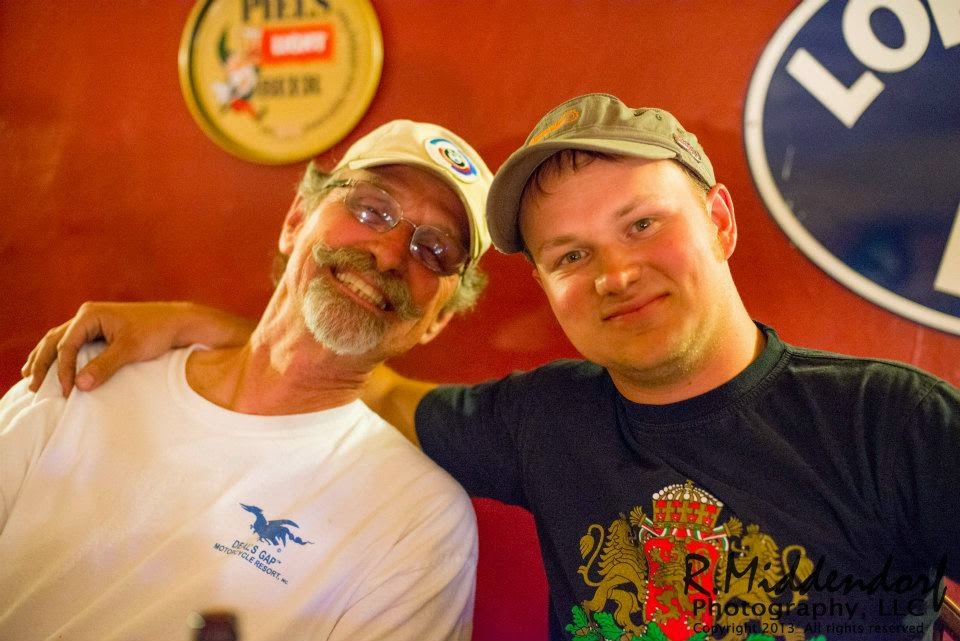 Credit to the photographer. 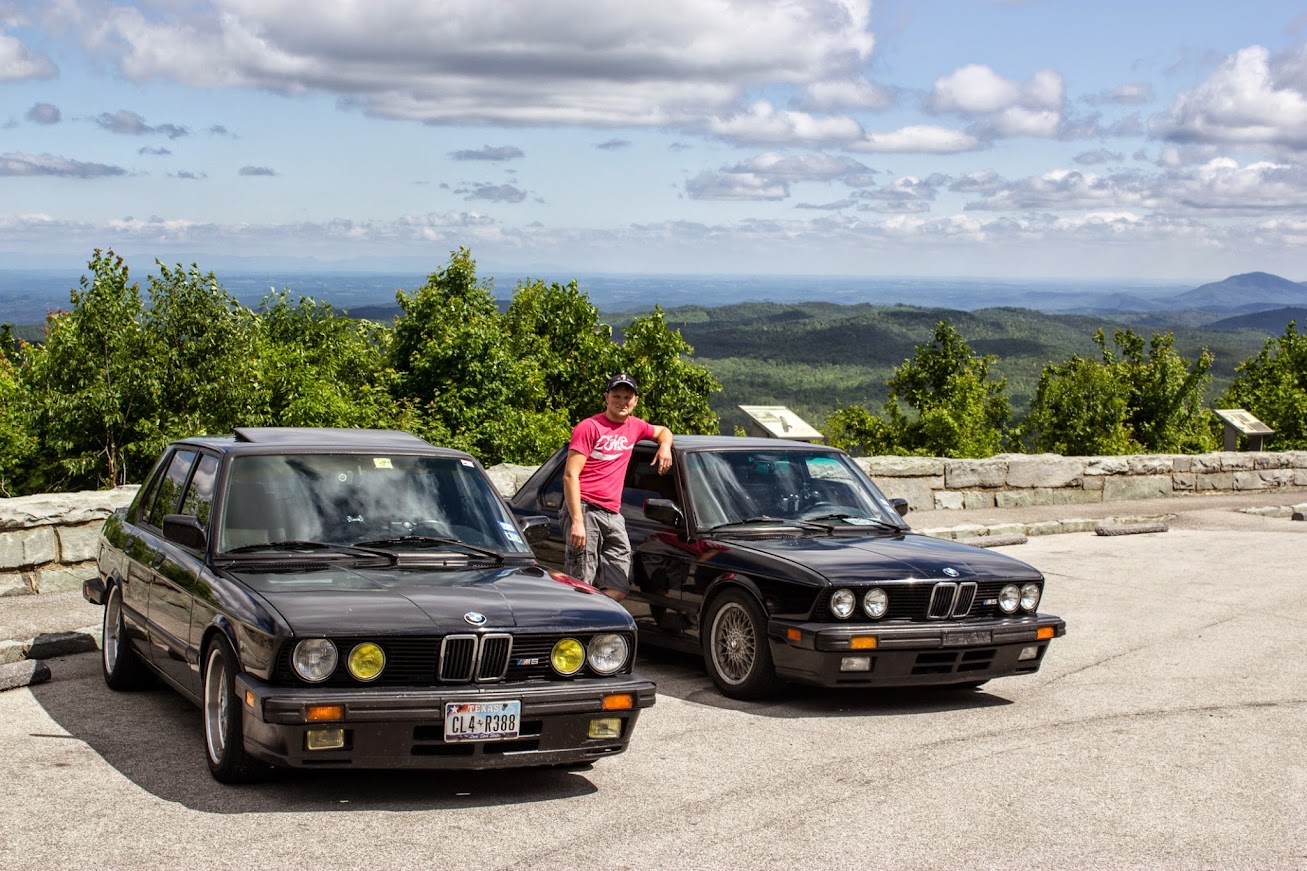 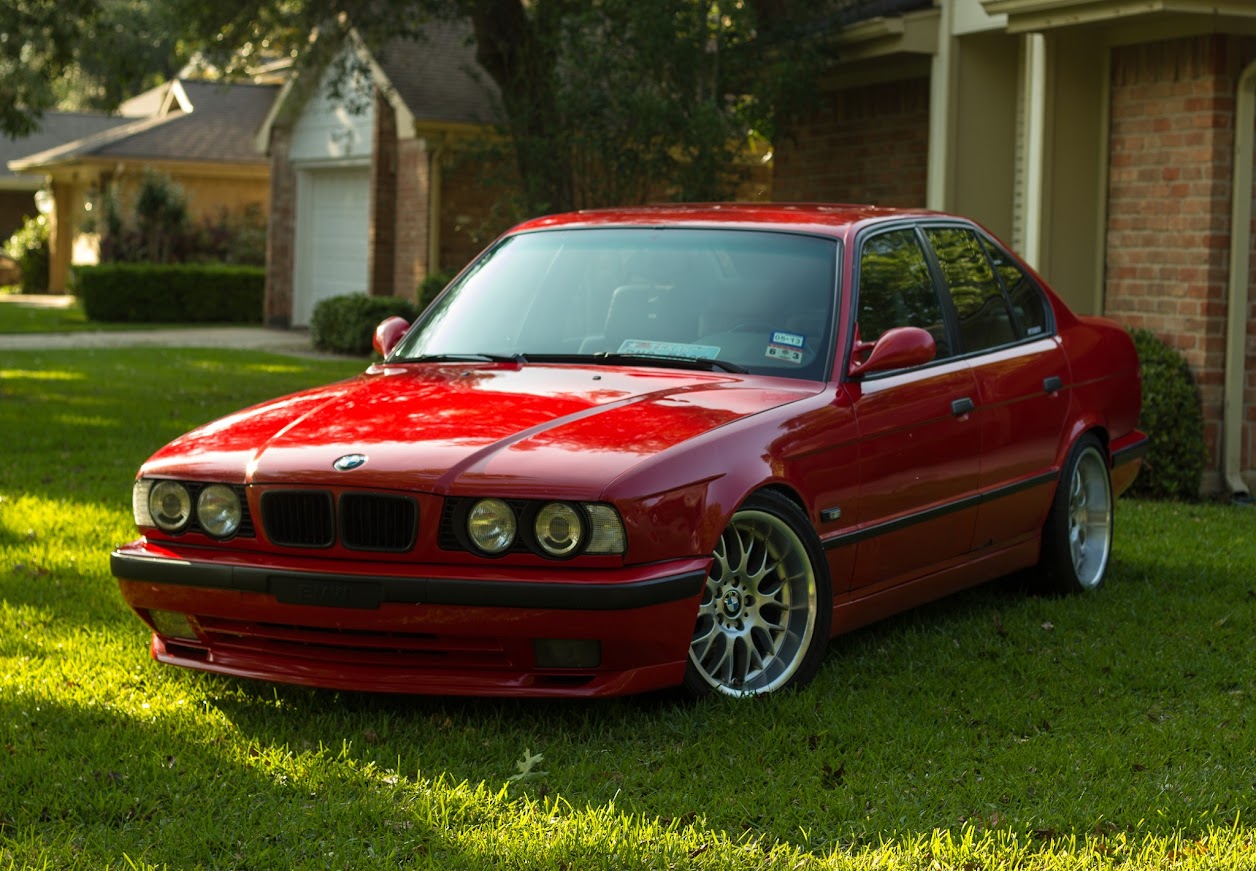 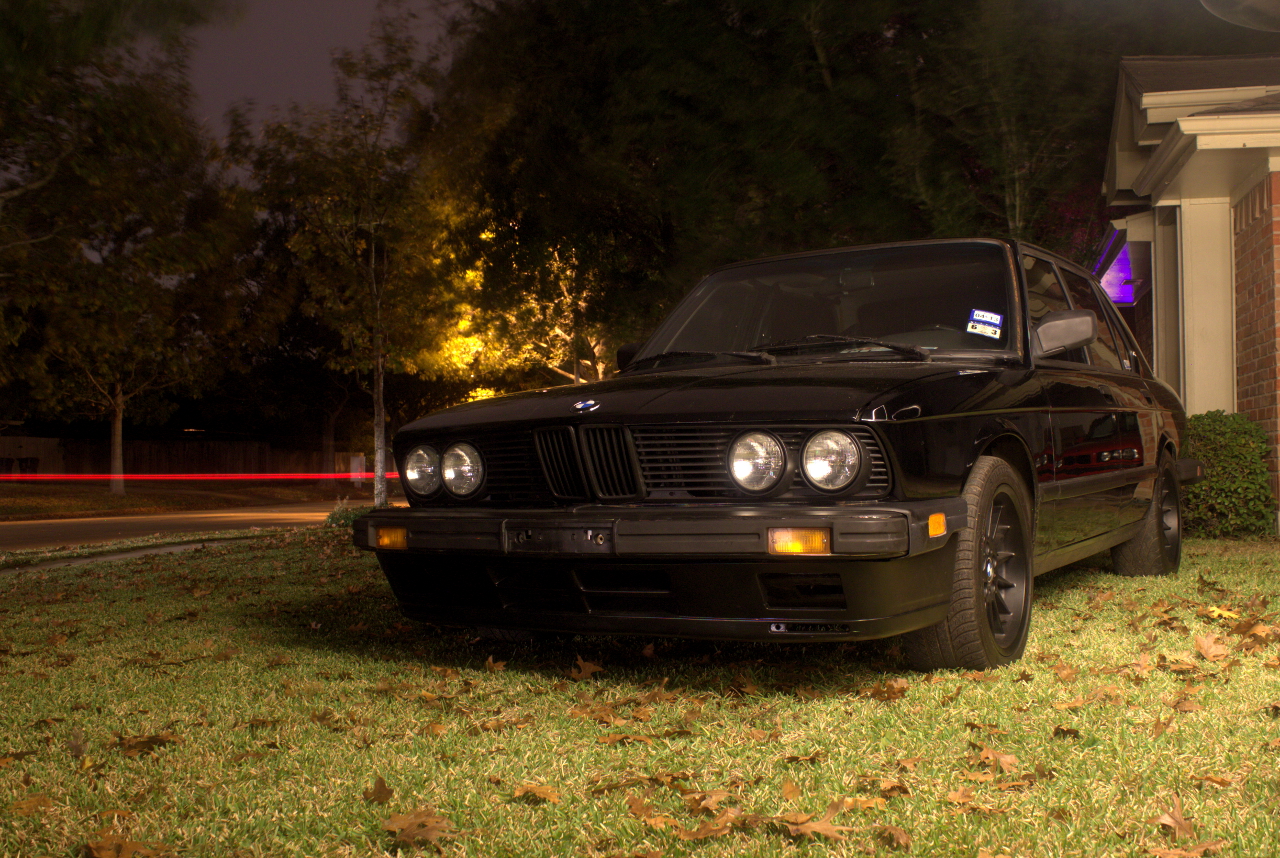 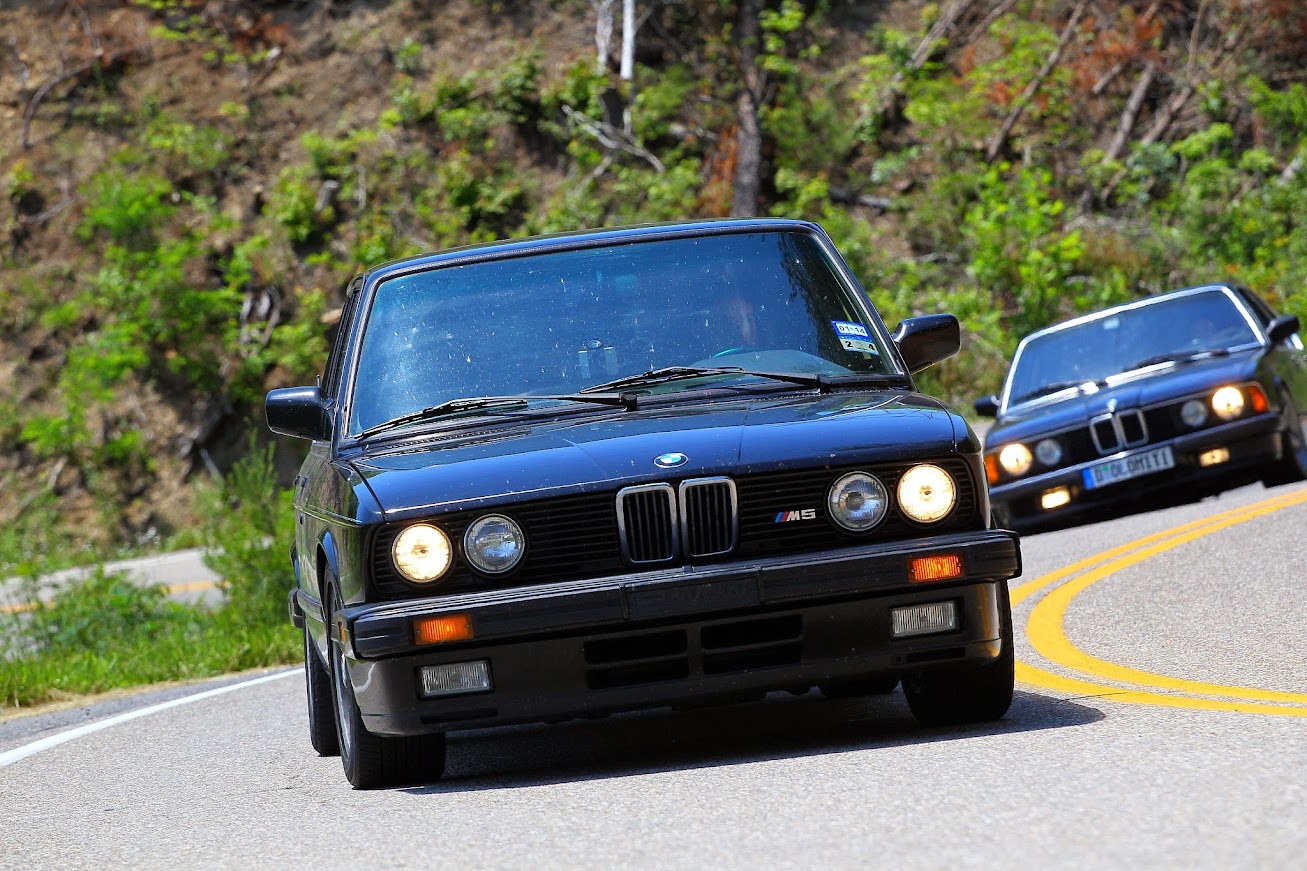 Pavel wrote:My '88 M5 on the tail of the dragon followed by my attorney

I've heard of having your attorney on speed dial before, but that's a new one

Pavel wrote:My '88 M5 on the tail of the dragon followed by my attorney

I've heard of having your attorney on speed dial before, but that's a new one

I sleep with my attorney.

Me busted cheesing in the garage.

And a couple GoPro stills I capped from road trips I've taken her on.

Only had her about a year but she is keeping her end of the promise so far, I've put on 15,000 miles already and fixed a lot of the quirks. Turns out the 528e with stock diff just feels at home on the freeway, it eats the mileage and my lifestyle lately has needed it to!
Top

I can't remember if I posted. I hope the pics are big enough.

And our two Bimmers

New To The Group

My wife and I just picked up the 88 528E today as her daily driver. I worked as a BMW mechanic when these were new but don't remember much so I am looking forward to all of the knowledge here for stuff like making the sunroof open, fixing the drivers door lock and a few other small things. The wife wants new wheels, a good sound system and maybe euro bumpers. I suppose I can finally post a pic of this mug!!! 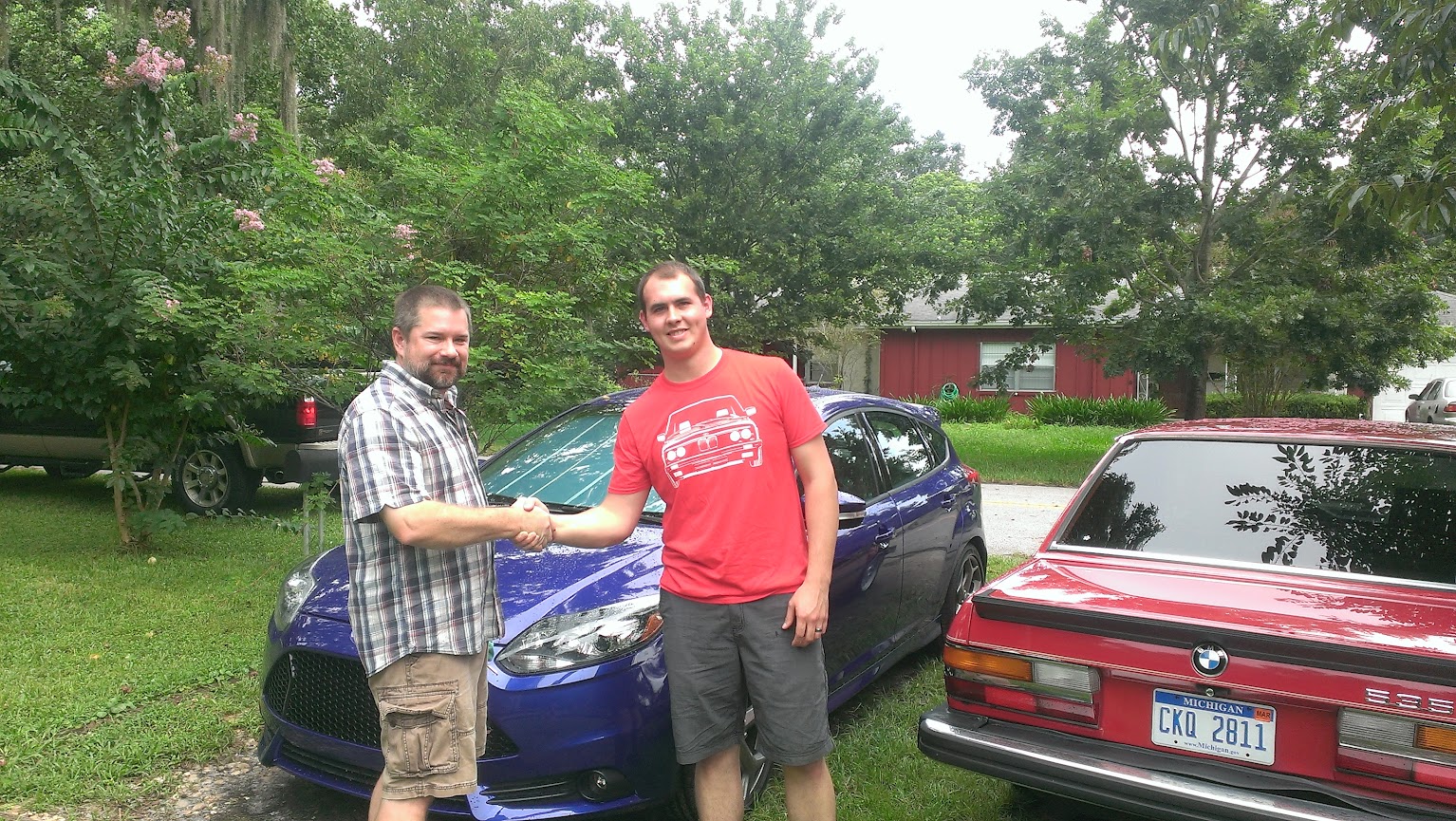 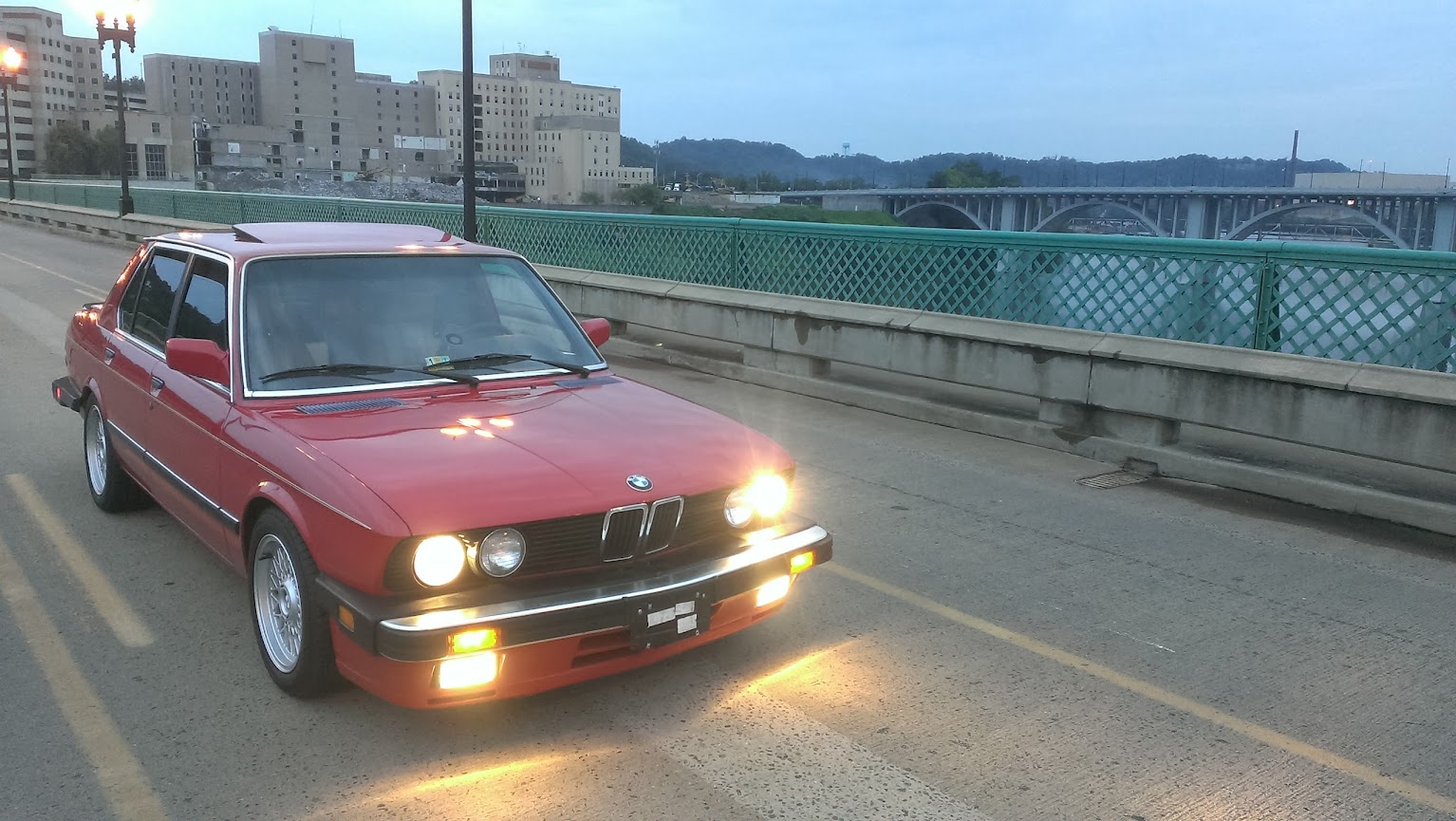