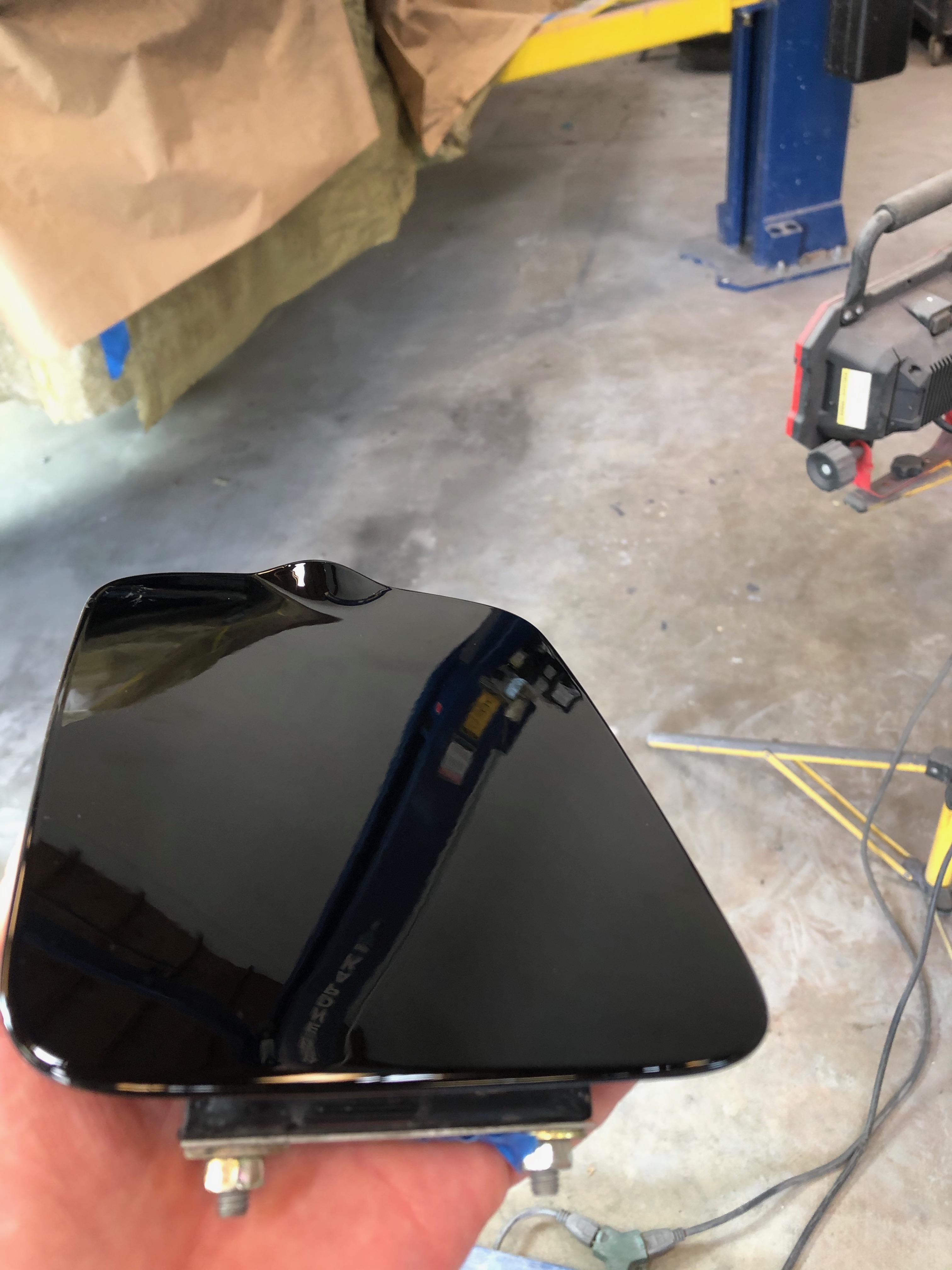 Roger's comment when he showed me this was, "If I could do a whole car that well, I'd charge double!"

He also re-did the right rear quarter. This was the one area where we found prior damage, and the repair work hadn't been that good. 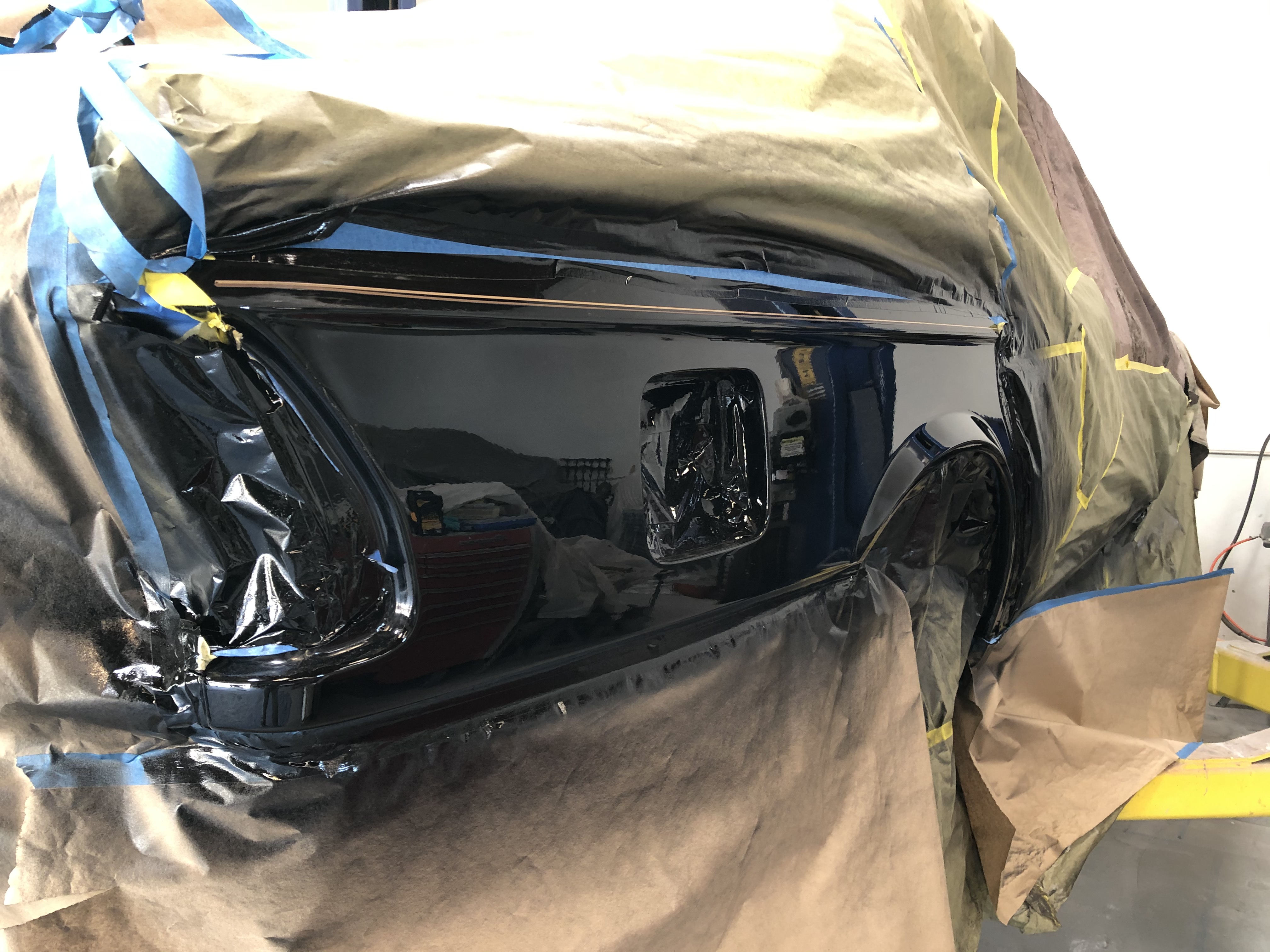 The depth and "blackness" of this black paint is pretty cool.
Top

I feel like I got such a steal from Ken.

OK, I know I'm being a bit gratuitous with all these bodyshop pics, but Roger told me I ought to come by today and have a look, and that I ought to bring a roll of TP, "Cause when you see this you're gonna shit!" Uh oh.

So, here's the rear right quarter. The area under the pinstripe is the new paint. Above the pinstripe is the original paint, carefully worked with a buffer. In-person, I can see signs of where the old ends & the new begins, but I have to be a couple of inches from the car: 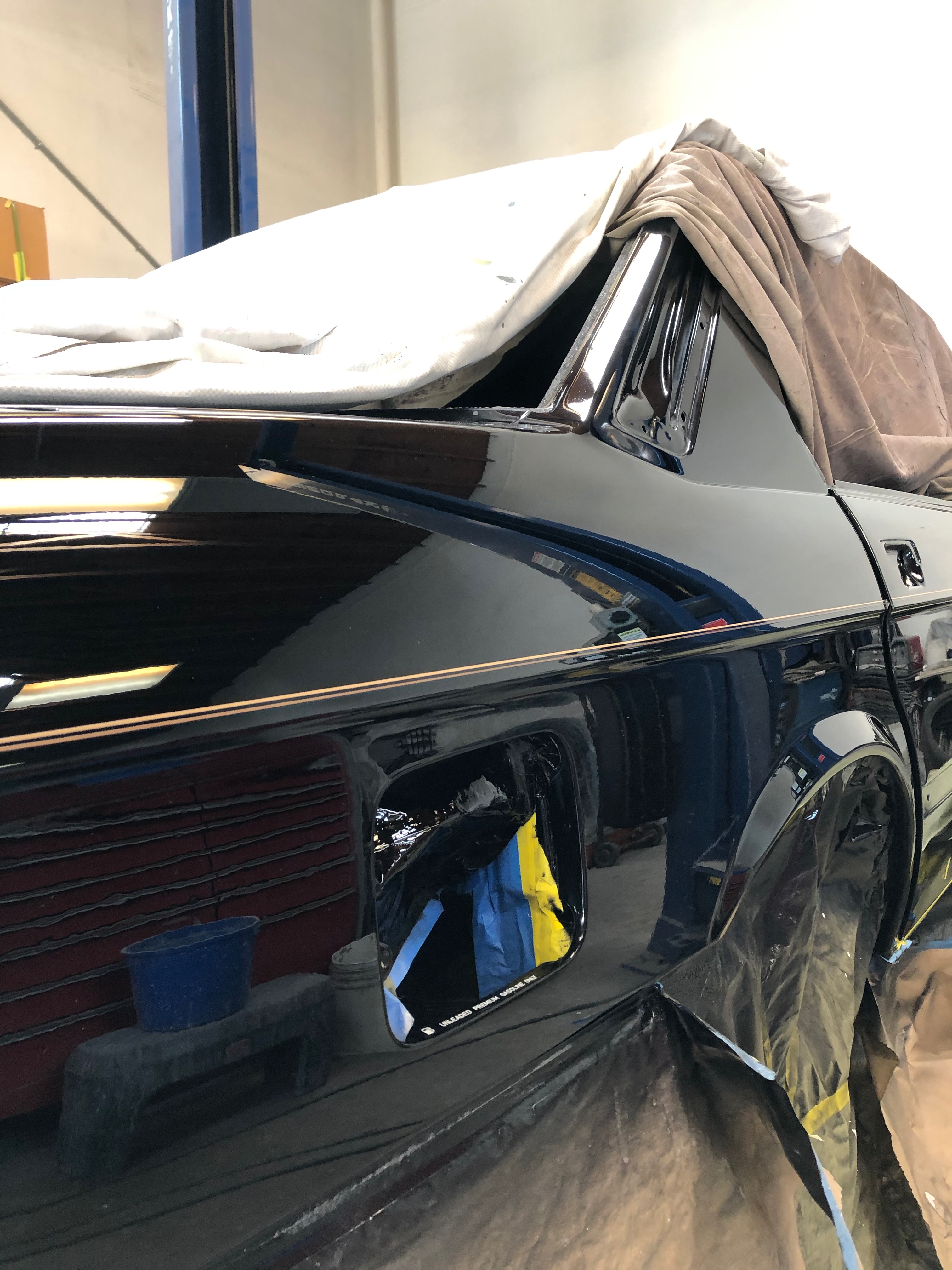 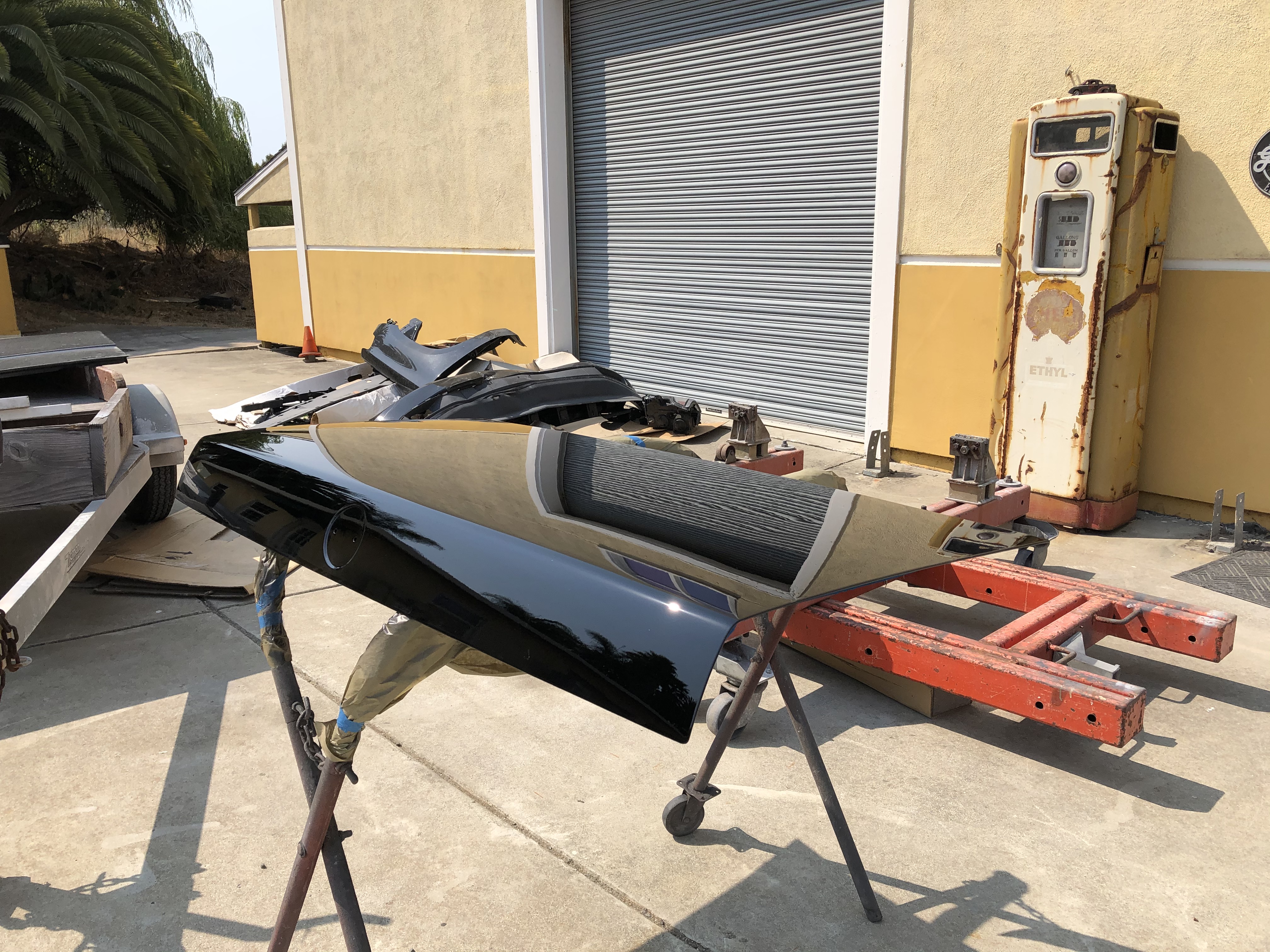 And here's the newly painted rear valance. Note that I decided to do the stone guard all the way around. 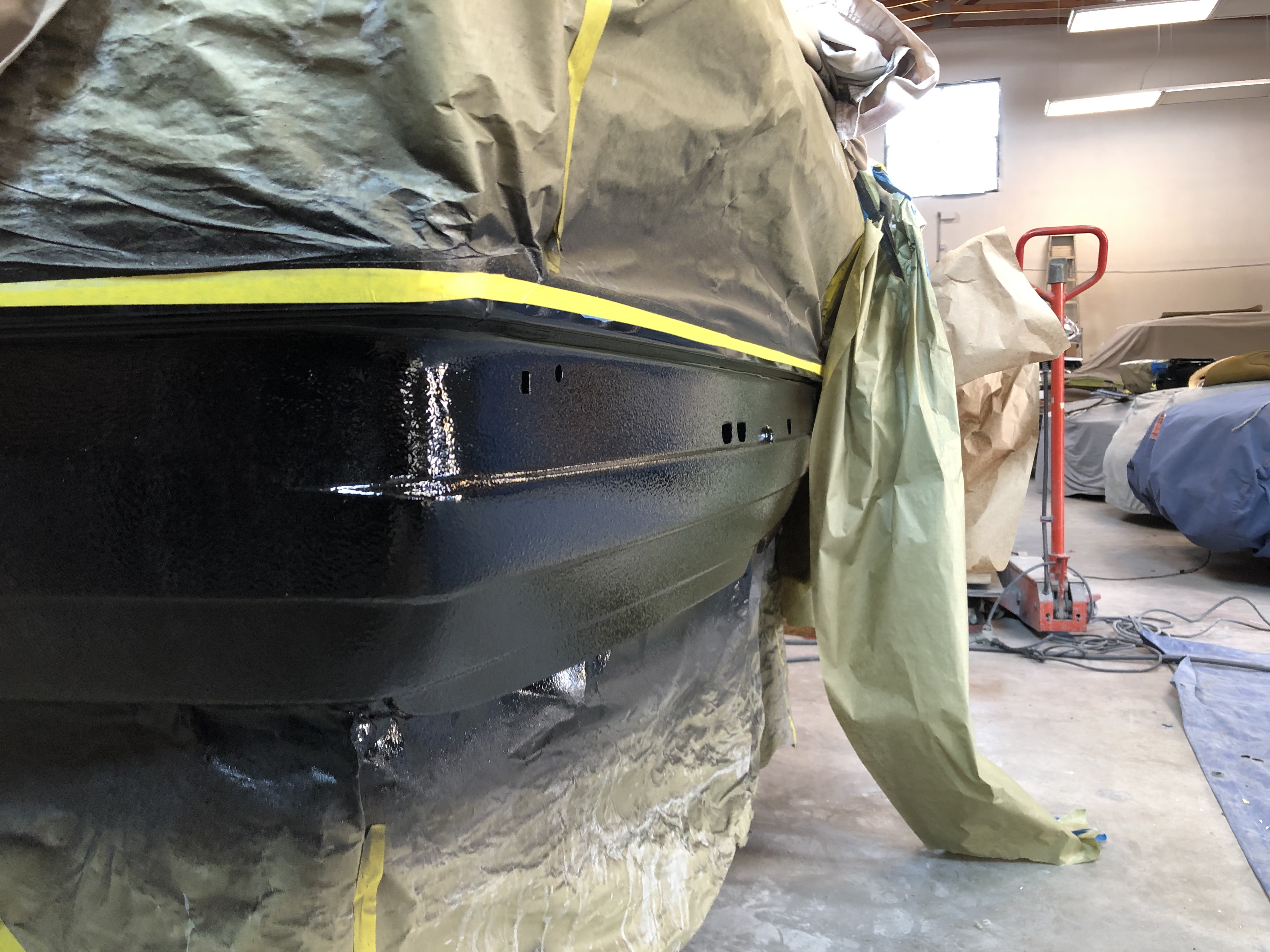 I'm not sure if I'm remembering it correctly, but I think some or all years of the true Euro M%s had the stone guard only coming around the back corner by 4 or 5 inches. As an example, here's a pic I took of the M5 that BMW has at it's museum in Munich. I think that this is an '85, but I'm not sure: 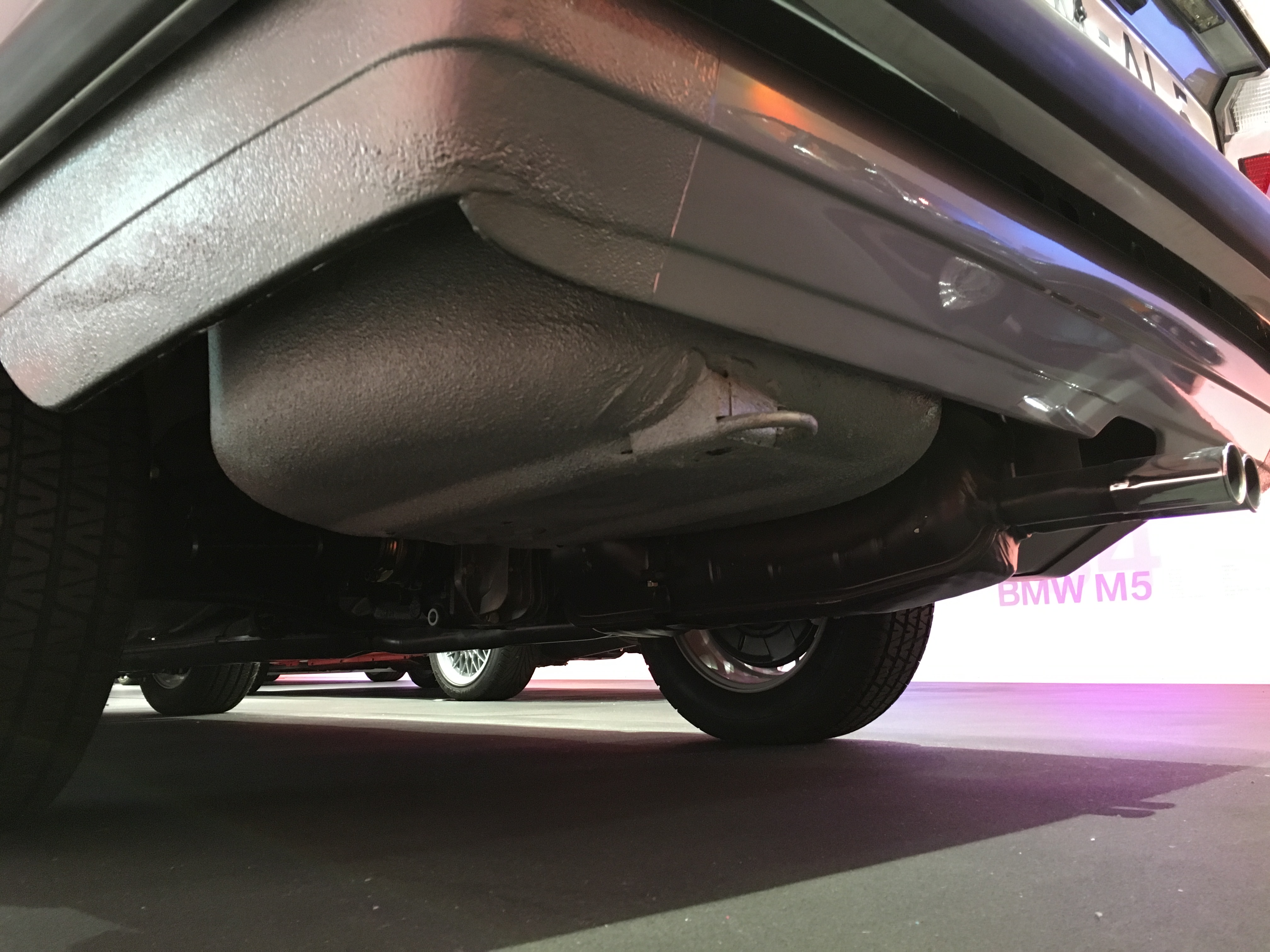 Oh, also, Roger is def going to help clean up the engine bay by painting selected areas to fix scratches & damaged paint, so that's a bit of a relief. In closely related news, I'm resigned to the fact that this car is highly, highly unlikely to be done by St. Paddy's Day 2021 (which had been my original goals). I'll likely get the car back from body & paint before the end of September, but that will be pretty tight timing to get everything back together. And I'm sure tuning the engine management will take longer than expected.
Top

Not much in the car world that looks better than a quality, deep, black paint job. Very nice, you must be stoked! As the owner of what looks to be an outdoor respray, I'm a bit jealous.

Incredible work, subscribed. Where did you source the new power steering reservoir stickers? I ordered a set from Pukar Designs a couple months back and haven't heard back - I'm starting to suspect they'll never arrive.
Top

reesesboot wrote: ↑Sep 10, 2020 6:24 PM Incredible work, subscribed. Where did you source the new power steering reservoir stickers? I ordered a set from Pukar Designs a couple months back and haven't heard back - I'm starting to suspect they'll never arrive.

I got them from Pukar. I have two more orders that I'm waiting for, and I'm at about 3 months now. I assume you've seen his most recent autoresponder?


Thank you for your email and please take the time to read this automated reply
Please bear with me and I will reply to all messages ASAP.
There are on going genuine and serious family priorities at this time
and i am unable to reply as quickly as I would like to. All orders are
being processed and will be processed and shipped, BUT everyone get
their order.
Also affecting orders and deliveries times is the ongoing Covid19
pandemic which is impacting 3rd party deliveries to us and there are
internal issues with postal services (mainly USPS)
We have been in business for over 10 years and will continue to
operate and fulfil your order, there is no need to worry
Thank you for your patience & understanding

I'd received an earlier email from him on Aug 20 saying "Bear with me. My mother felll and broke her hip. Will advise."
Top

Yes, I did receive the automated email. Good to know that it will eventually come, not like it's critical.
Top

He is always frustratingly slow and has excuses all the time. He should not take money until he ships. In fact, even when he ships (if he ships) two of my orders never showed up. Just sayin'.
Top

I’ll give it another few weeks.
Top

My 1985 Euro M5 does not have the stone guard all the way around, consistent with the BMW museum car.
Top

My 1985 Euro M5 does not have the stone guard all the way around, consistent with the BMW museum car.

My 1985 Euro M5 also does not have the stone guard all the way around.
Top

Undercoating on the rear panel depends on the date of production.

early '86 and before => only the corners and sides with undercoating

It doesn't depend on the engine or anything else, it's just a matter of production date

Boneyard Dynamics wrote: ↑Sep 24, 2020 3:20 PM Undercoating on the rear panel depends on the date of production.

early '86 and before => only the corners and sides with undercoating

It doesn't depend on the engine or anything else, it's just a matter of production date

Good to know. And I think the M5 in the Museum was an '85? So that would be consistent.
Top

Incredible work!! Great attention to detail in every aspect of the build. Very impressive!!
Top

Past due for an update. I got the car back from the body shop about 10 days ago. I feel like I haven't made a ton of progress in the time the the car was at the body shop, but now that it's back, I really want to get the momentum going again.

First, one nice surprise is that Roger was able to blend in the bright yellow SEM sprayable seam sealer that I'd used on the underside. Here's what it looked like after I sprayed it: 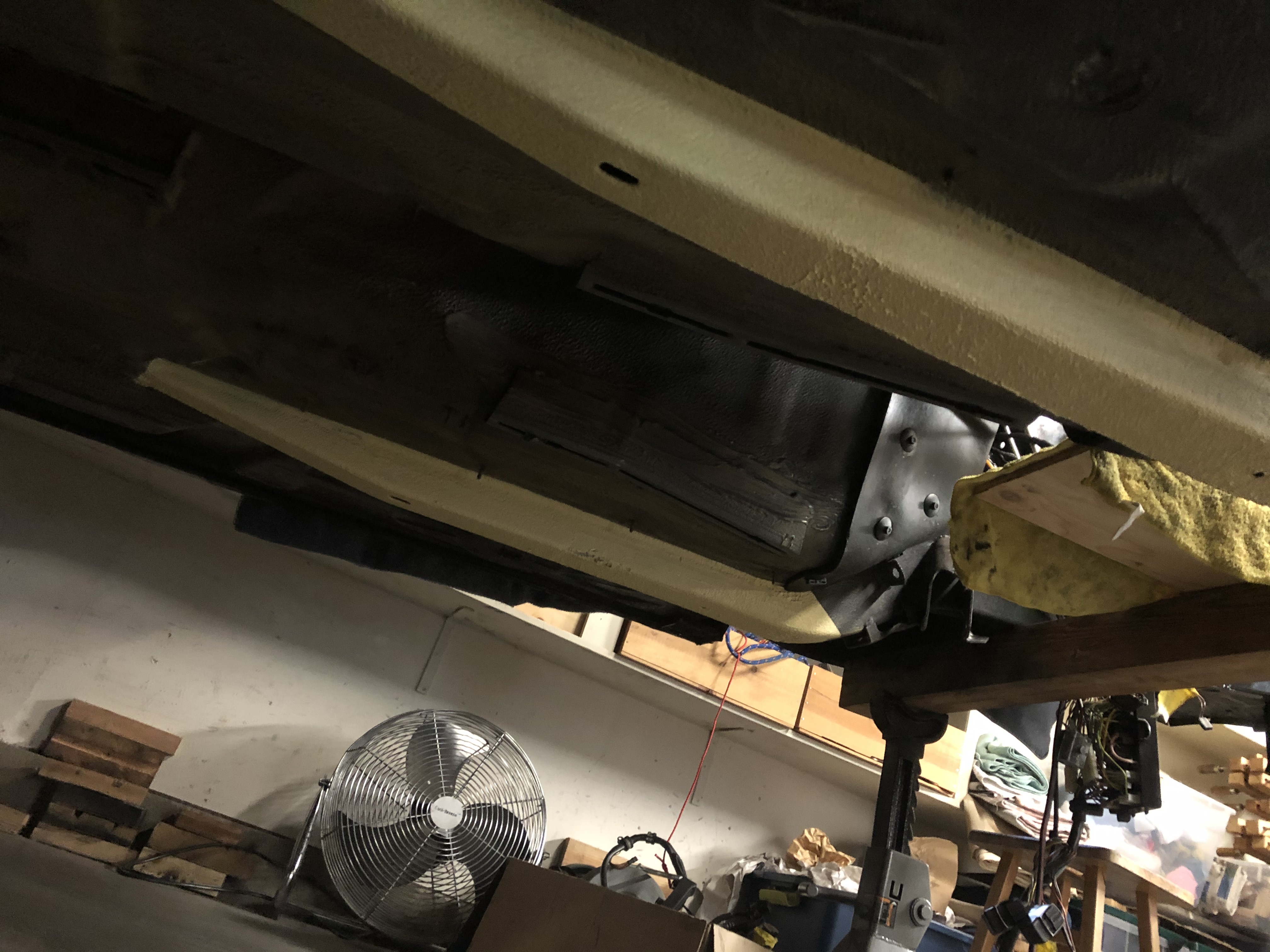 And here's what it looks like after Roger fixed it: 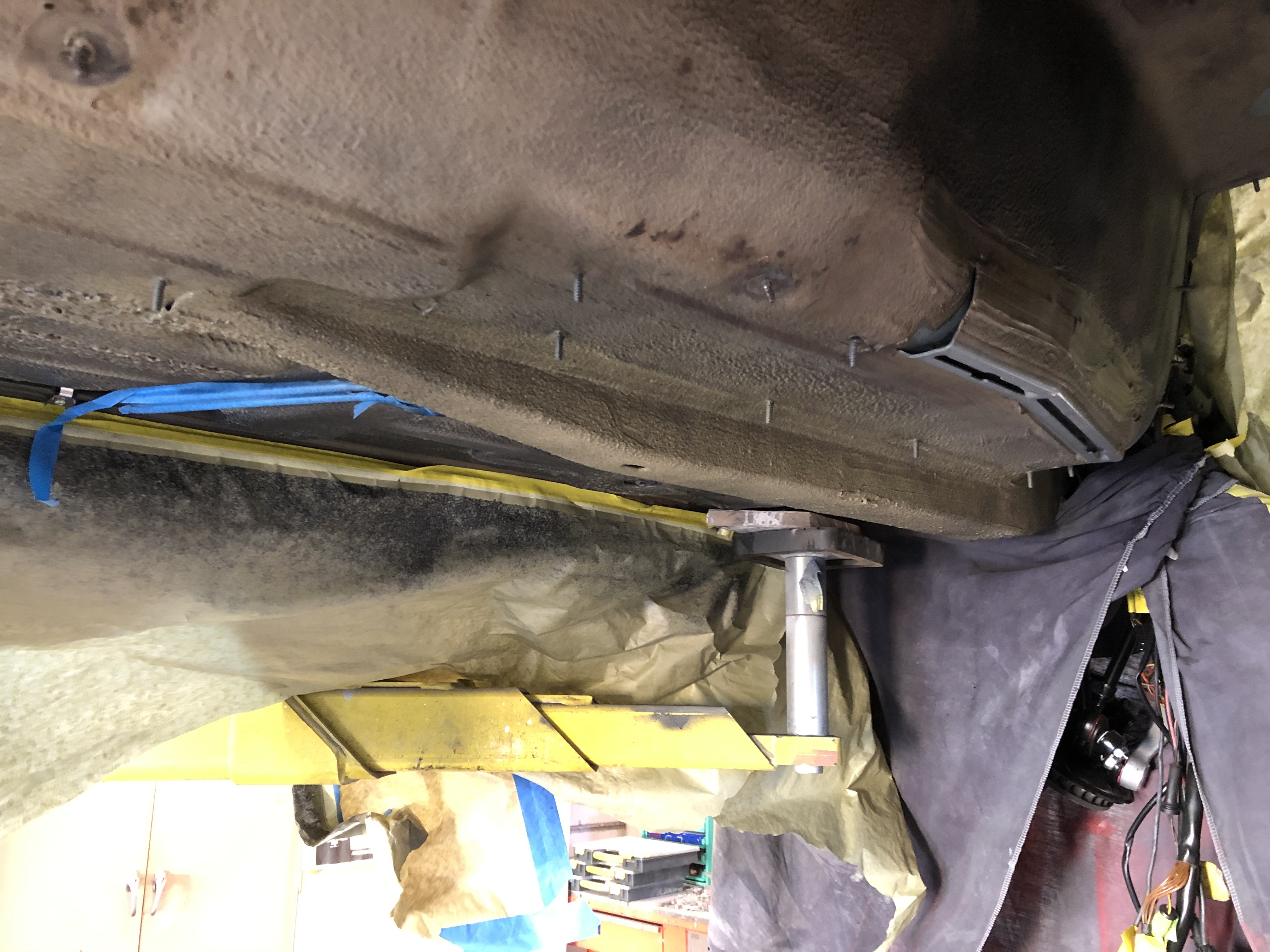 Turns out, SEM makes a product specifically intended to blend new undercoats with the color of our old stuff: 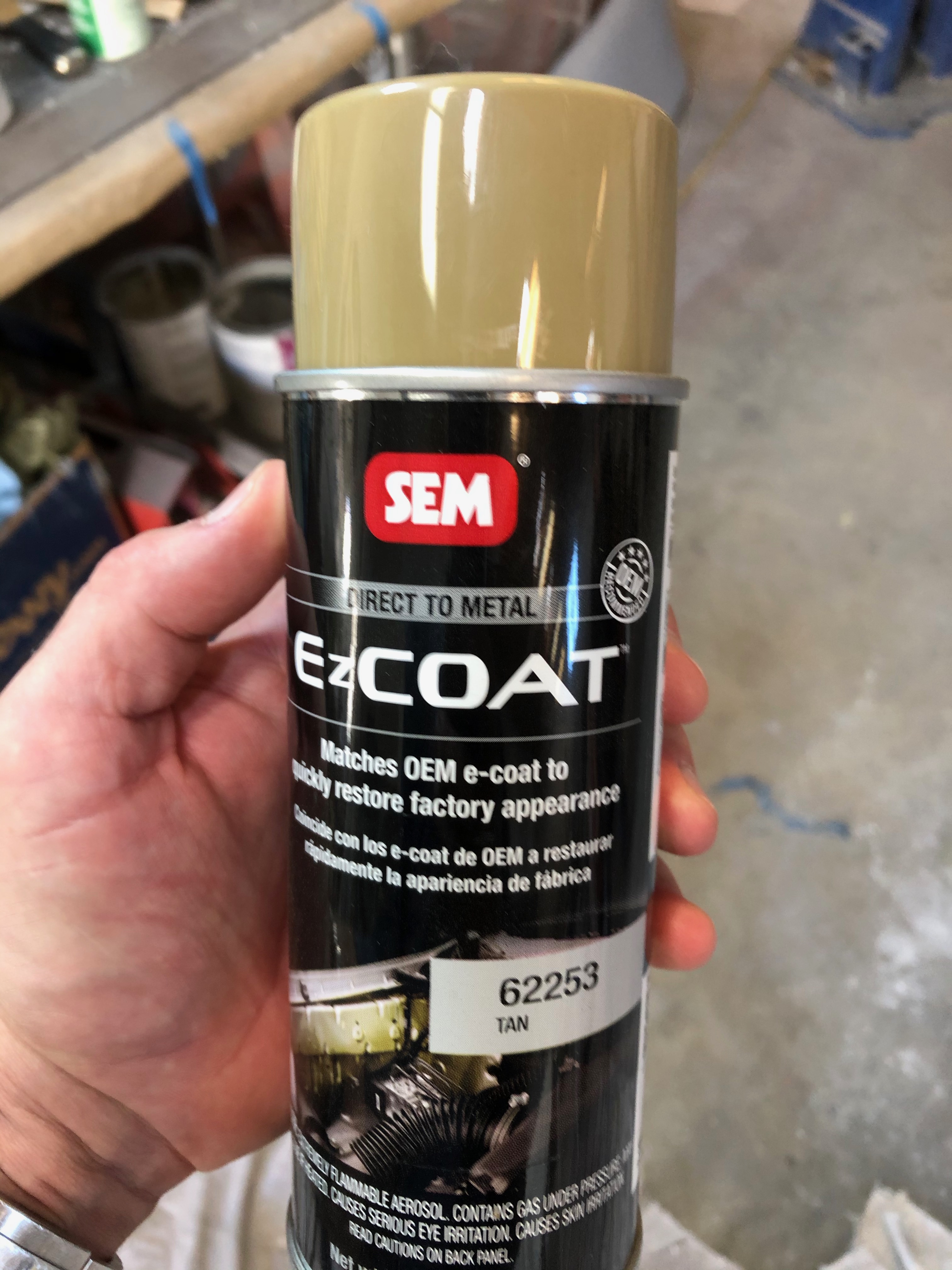 I also cleaned up the transmission. Before: 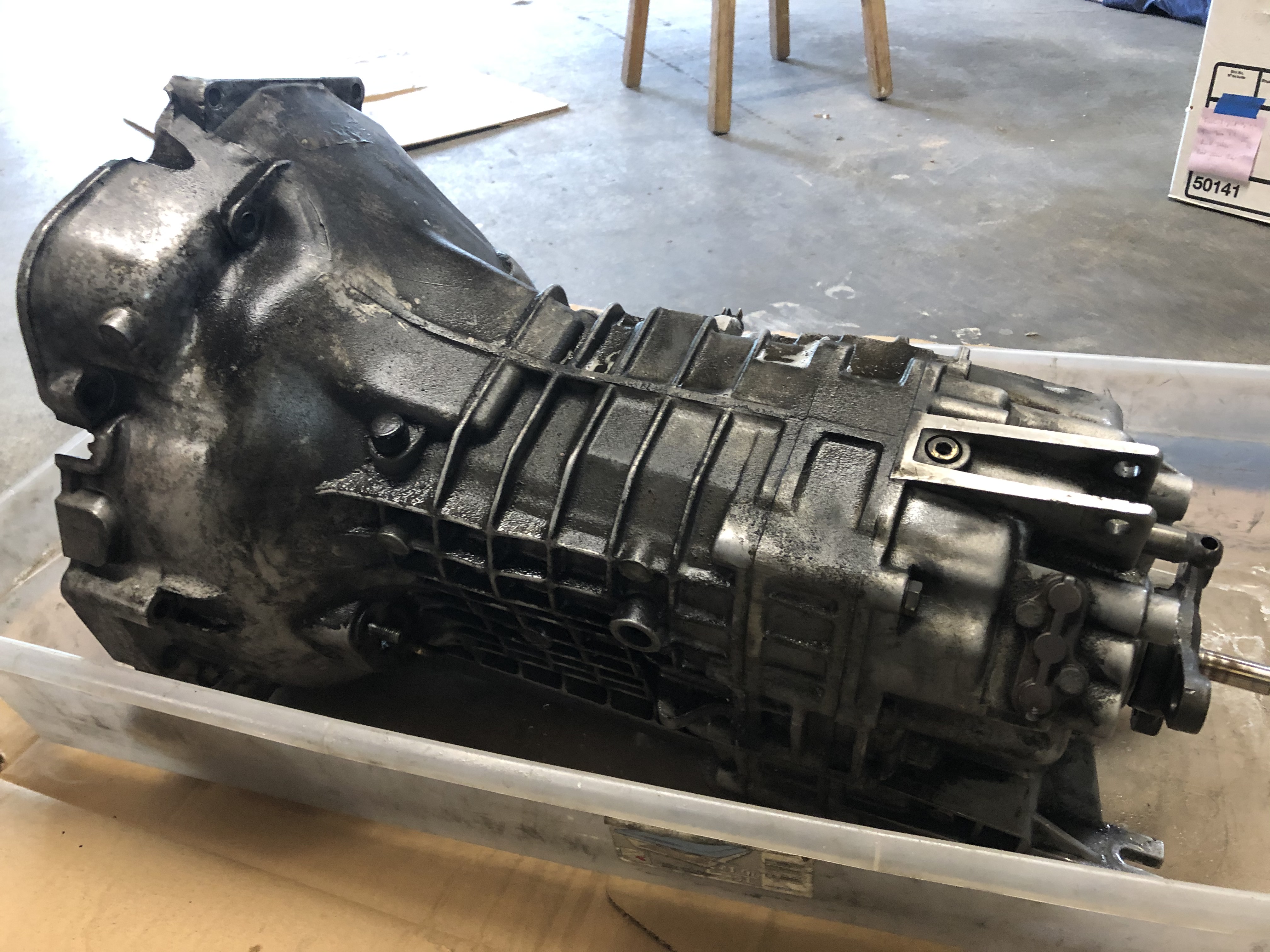 And here's after. New seals (input, output & selector shaft), new reverse light switch, all new rubber & bushings for the linkage. Note that the rubber boot at the base of the stick shift was butchered on some prior occasion when whoever was working on the car was unable to figure out how to get the reverse-light switch wiring up from the tranny into the cabin (they just cut a gash in the side of the boot & stuffed the wire through, I guess). So I bought a new boot (not installed yet). 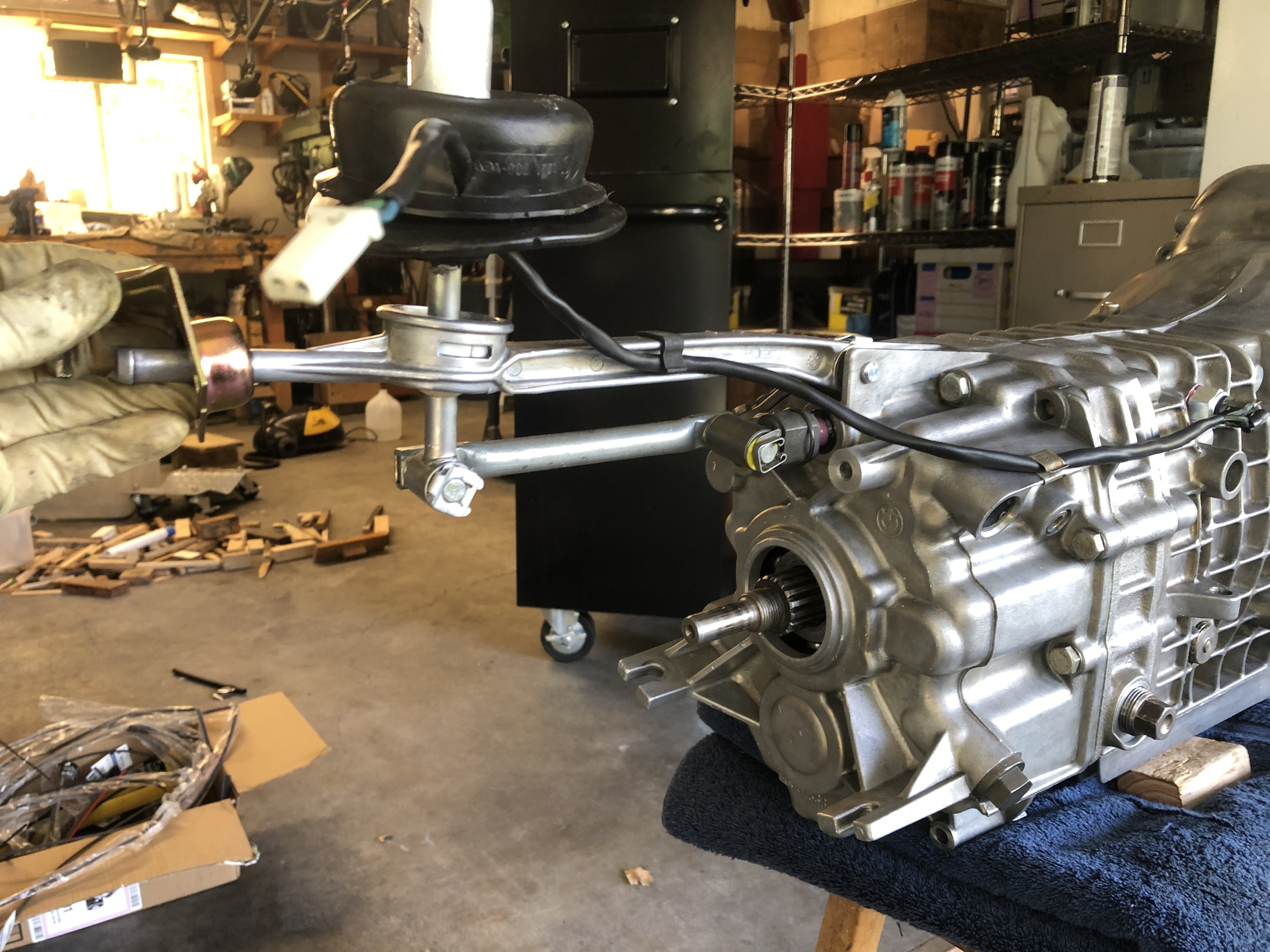 Also, in case it's of interest, here's a pic down the elector shaft hole. There's zero room to push the old seal down in order to press a new one in on top of it. I don't get how some people think it's OK to try to just jam a new seal in on top. 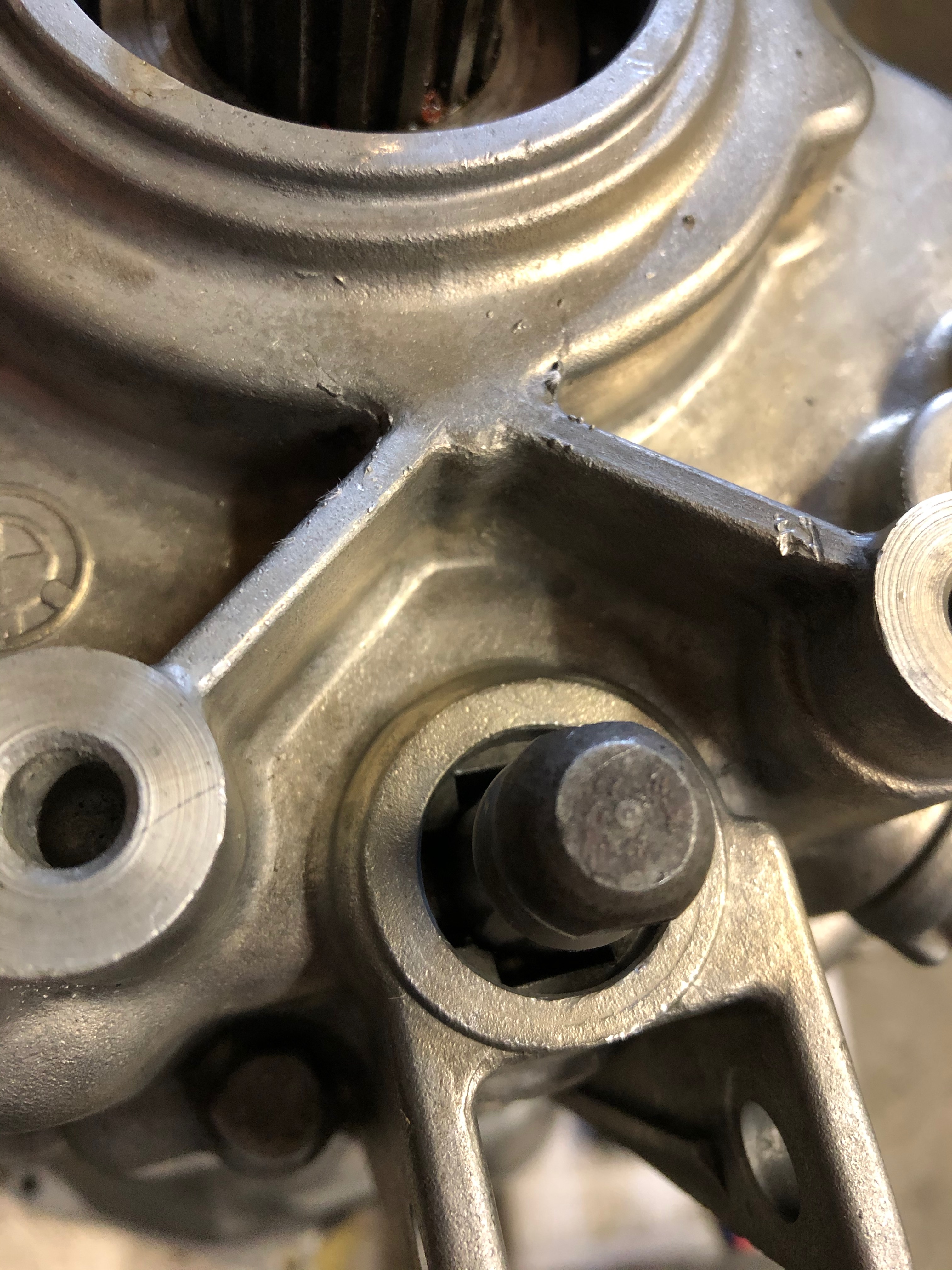 We also painted the engine compartment. Here's the sanding & scuffing in progress and then the painted result: 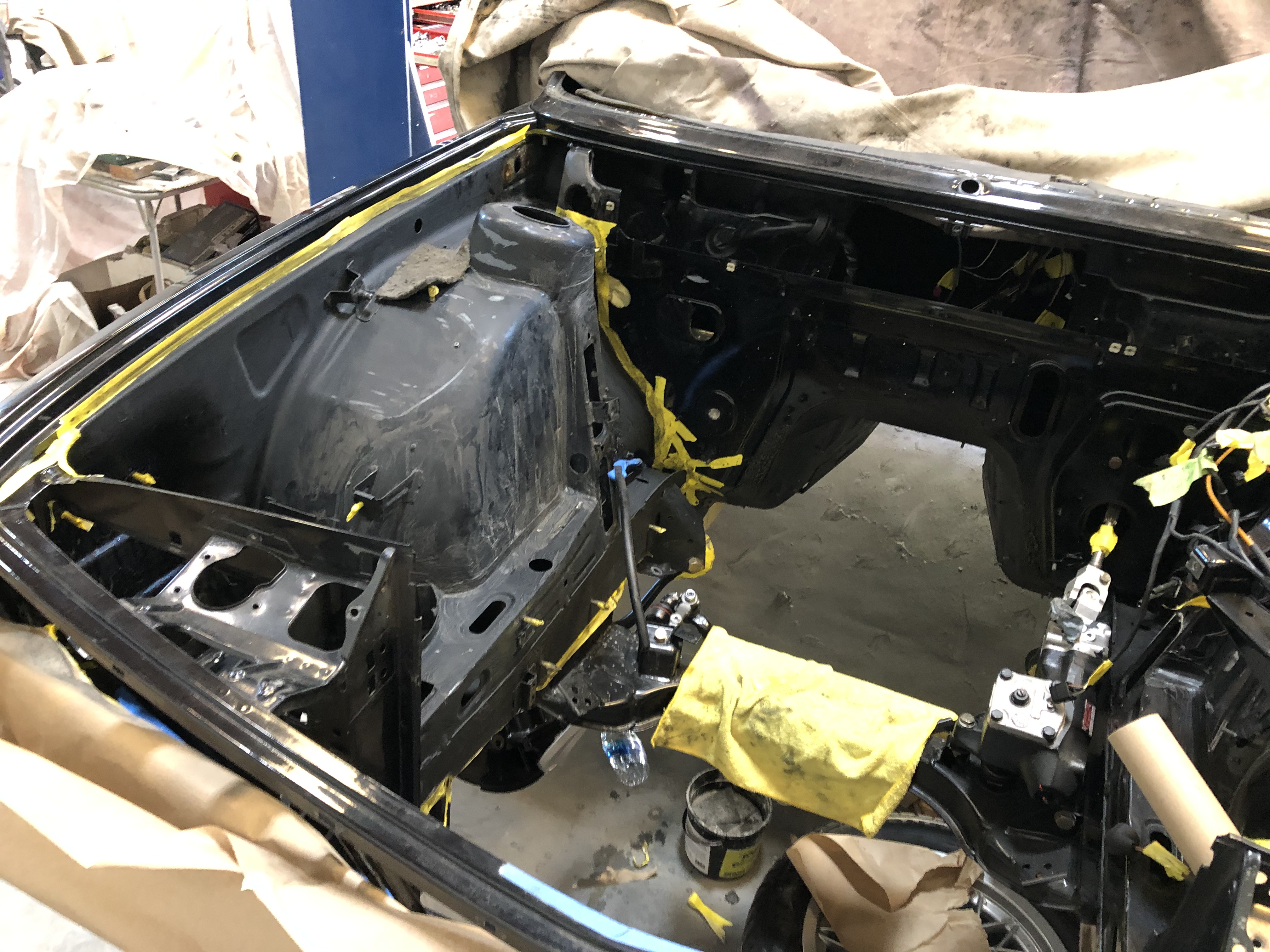 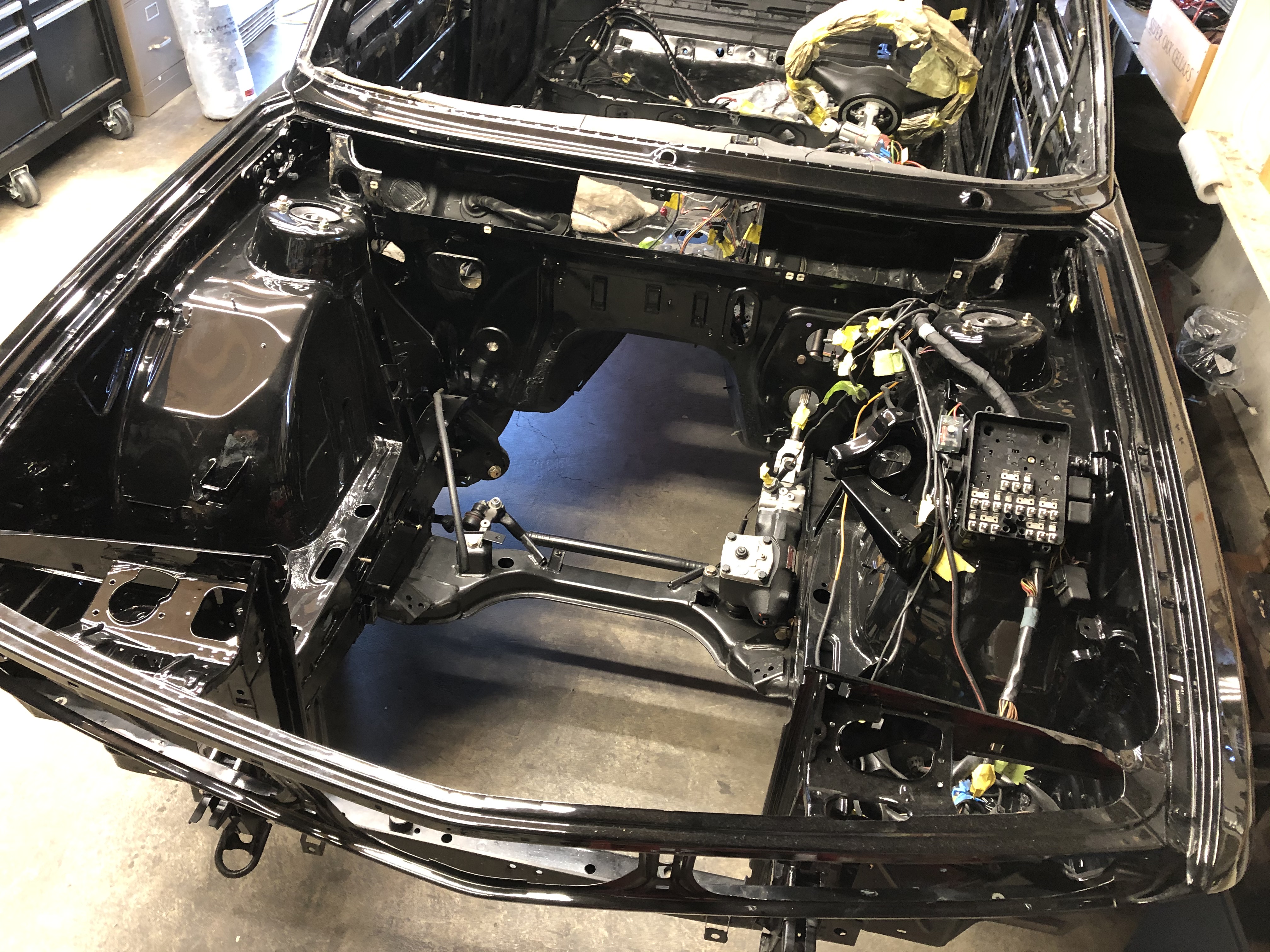 I also solved a small minor mystery. It's tough to see in this pic, but I'd always puzzled why a block of wood had been inserted into one of the trunk hinges. Turns out that the right trunk hinge had been bent back - as if someone had bent the hood back when it was open. (You can see that the tab at the right side of the pic is slightly bent away from the hinge; the brown thing in between the tab & the hinge is a small block of wood.) The block had been inserted in there to make up for the "hyper extension" of the hinge and keep the hood from opening more than it was supposed to. Needless to say, I have two new hinges in hand. They'll get painted (along with the rest of the trunk) in the coming days (weeks is more likely). 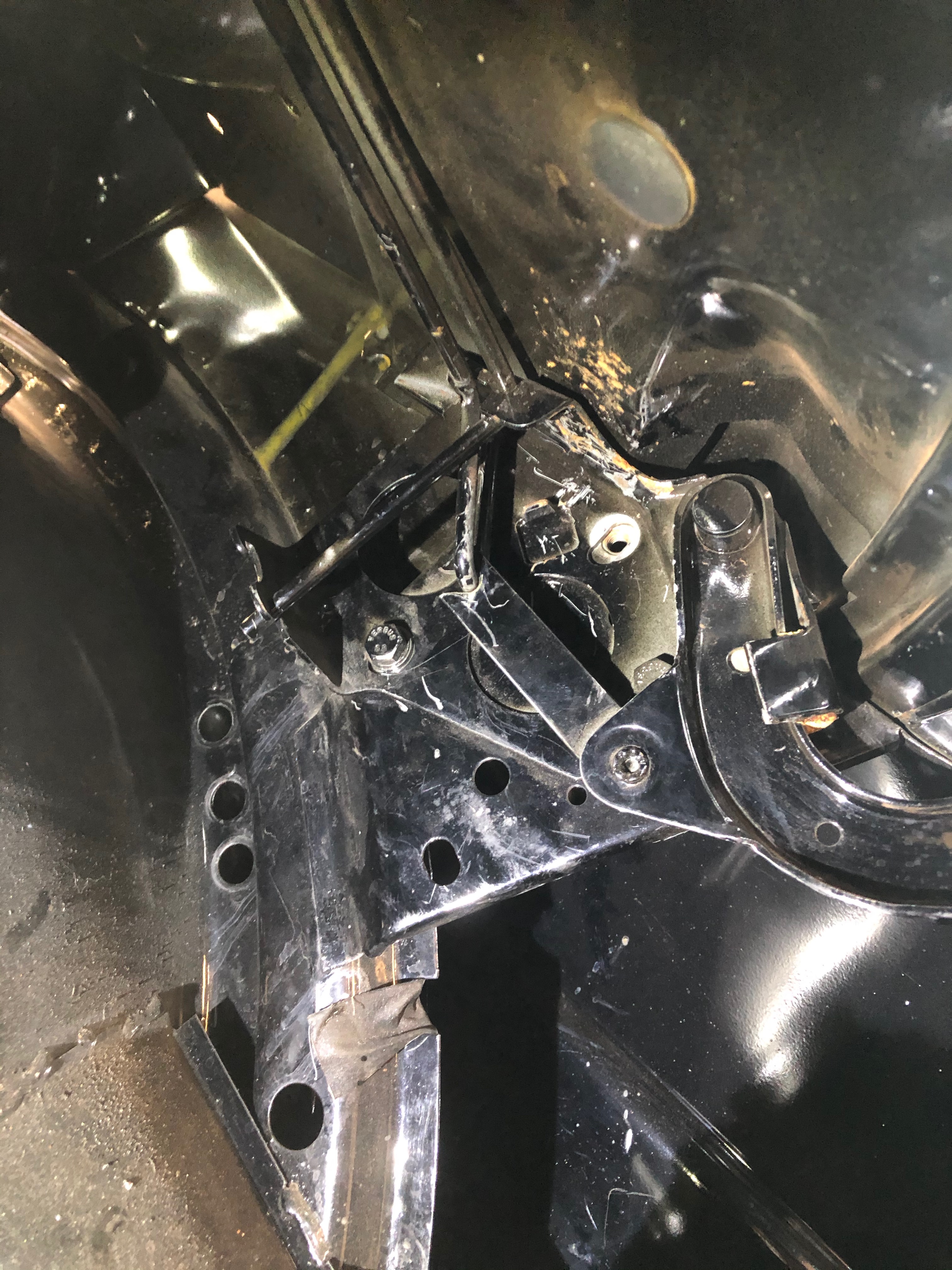 Aaaand here's the car all dolly'ed up getting ready to get towed home. 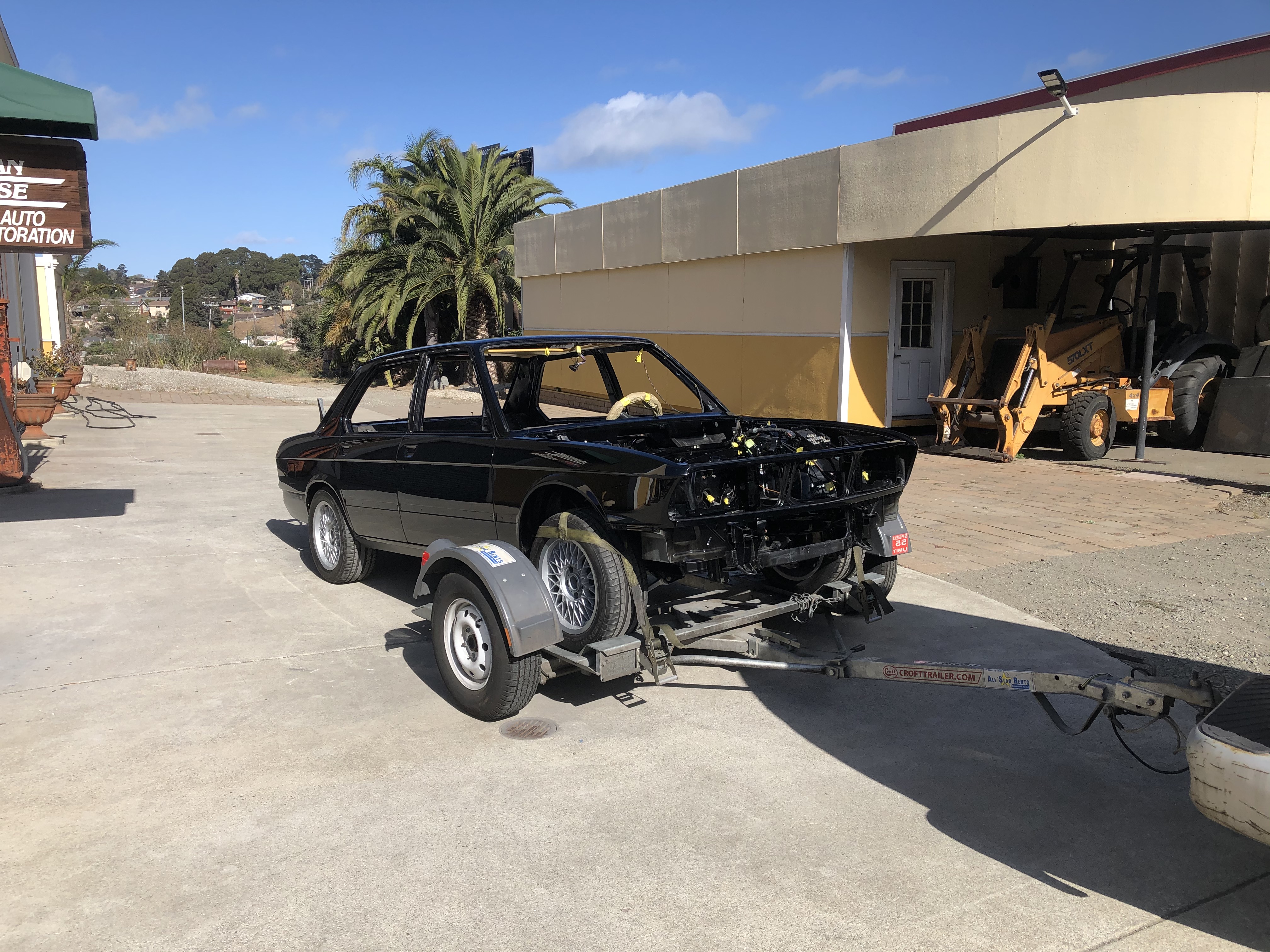 This was shortly before a minor disaster struck. About a mile into the trip the rear wheels locked up. I was immediately reminded that I'd never filled the diff with new fluid - DAMN! That seemed like a good idea at the time - I figured I'd be more likely to get all the fluids into the car if I did them all in one step instead of trying to remember what I'd put in and what I hadn't. As a result of having no fluid in the diff, the rear pinion gear overheated, expanded and seized up, causing the rear wheels to lock up. Here's a pic of the burnt pinion bearing. 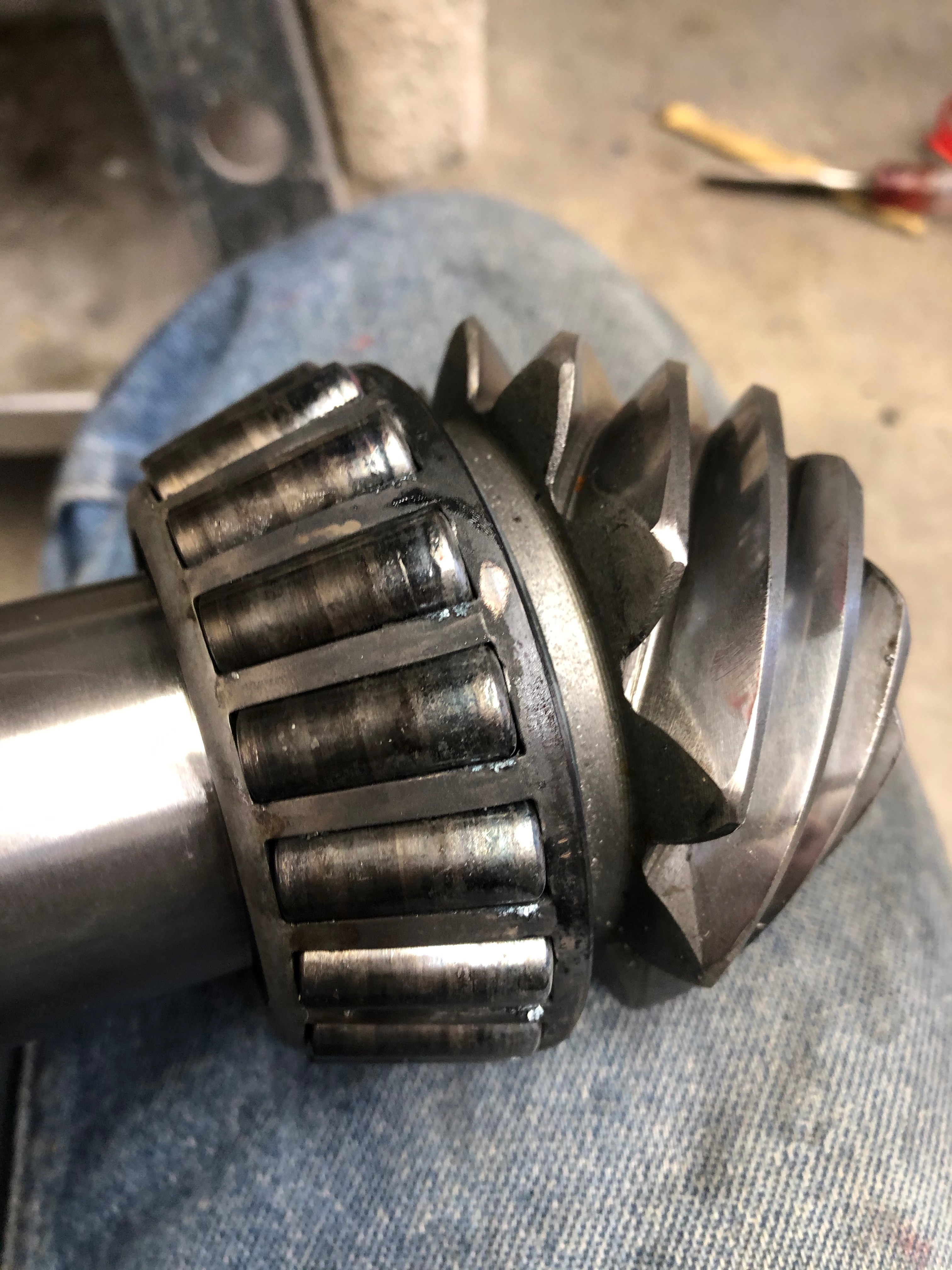 As it turned out, this ended up being a HUGE blessing in disguise. I don't have pics (or videos), but after I got the new bearings pressed in and started to torque down the new crush collar, it became clear that my original pinion bearings had likely been bad all along (or were about to go bad). I can't remember if I posted this earlier, but I replaced the original crush collar at the same time that I replaced the pinion input shaft seal. This was my first time torquing down a crush collar. I followed all the directions I could find. When I was testing the pre-load last time, the static drag torque (torque required to get the pinion spinning) was ~40+ in-lbs, and then even though the running torque was in the correct range (I was shooting for 15 to 20 in-lbs), it was a tiny bit notchy - that is, it spun fine to my fingers, but the needle on the beam-style torque wrench was vibrating.

This go-round, the static drag was maybe 19-20 in-lbs and the running drag was 16-17 in-lbs. (I was shooting for 15 but it snuck up on me quicker this time, too.). Also, the needle on the torque wrench was smooth & steady.

In case it's helpful, based on what I found online, running drag of 14-16 in-lbs is ideal (getting that from a Metric Mechanic PDF), so I think I pretty much hit it. 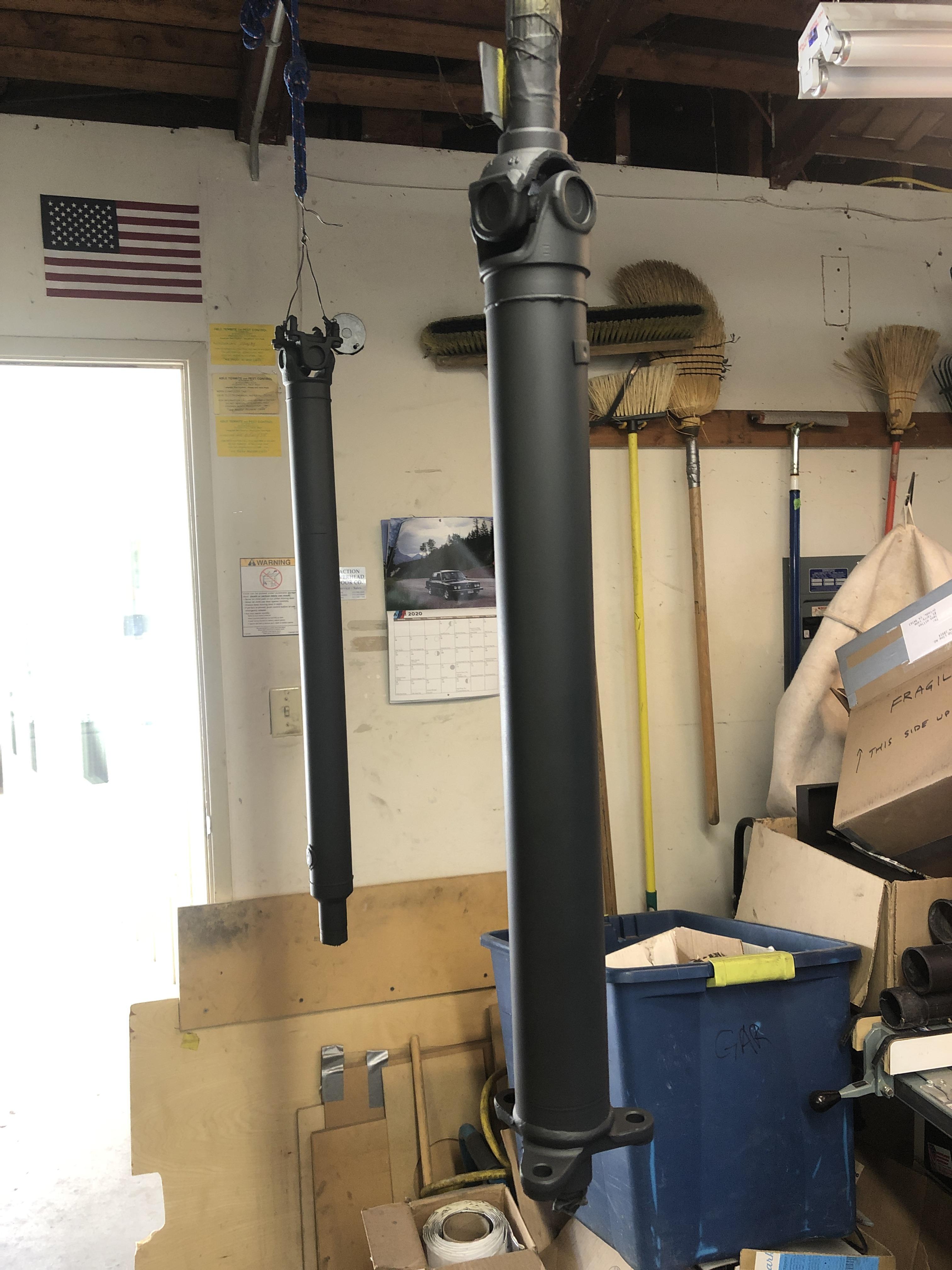 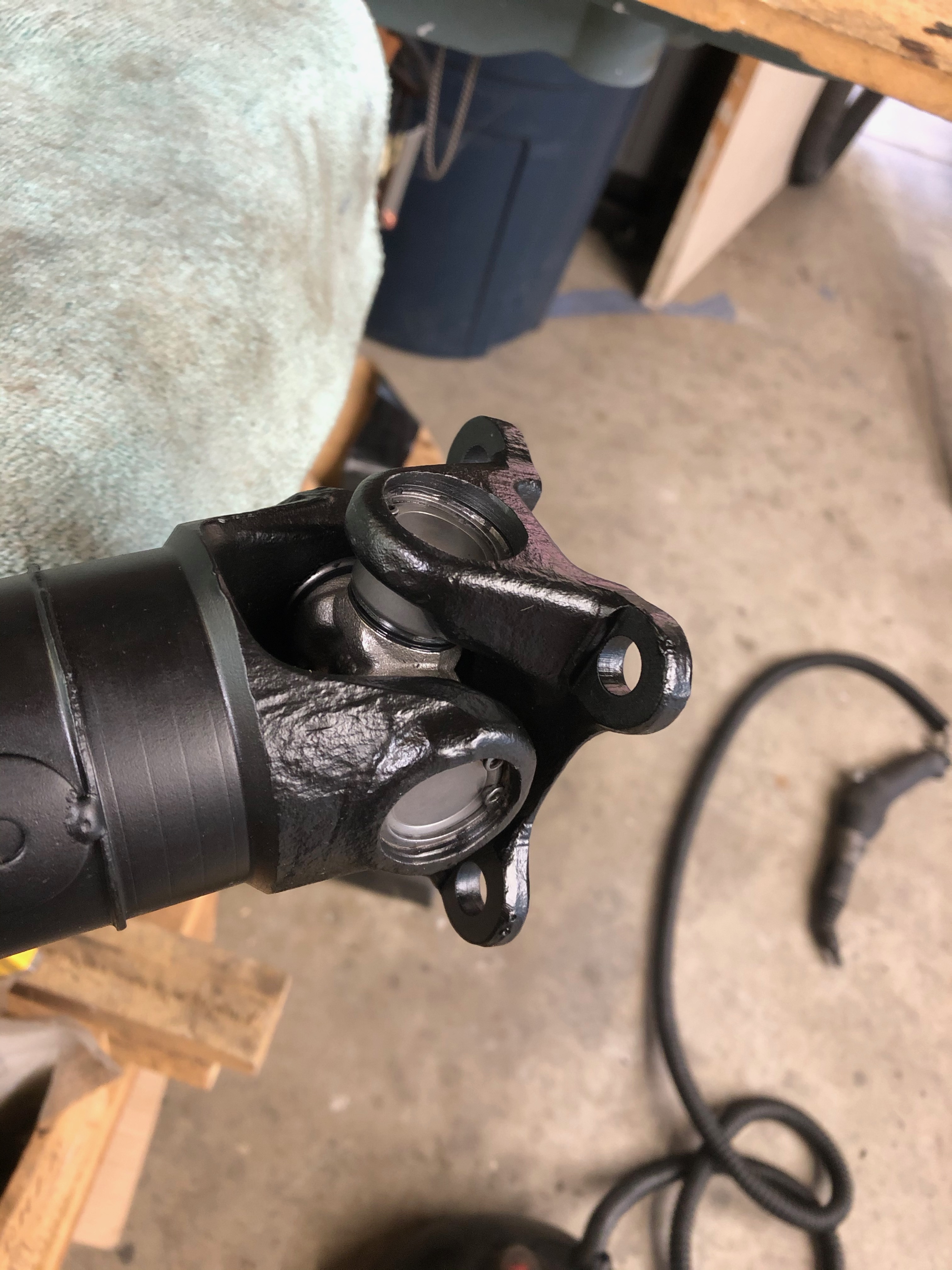 I also got my leather dash finished! Damn ... I wish this project was already to the point where all I had to do is just put parts back on the car. 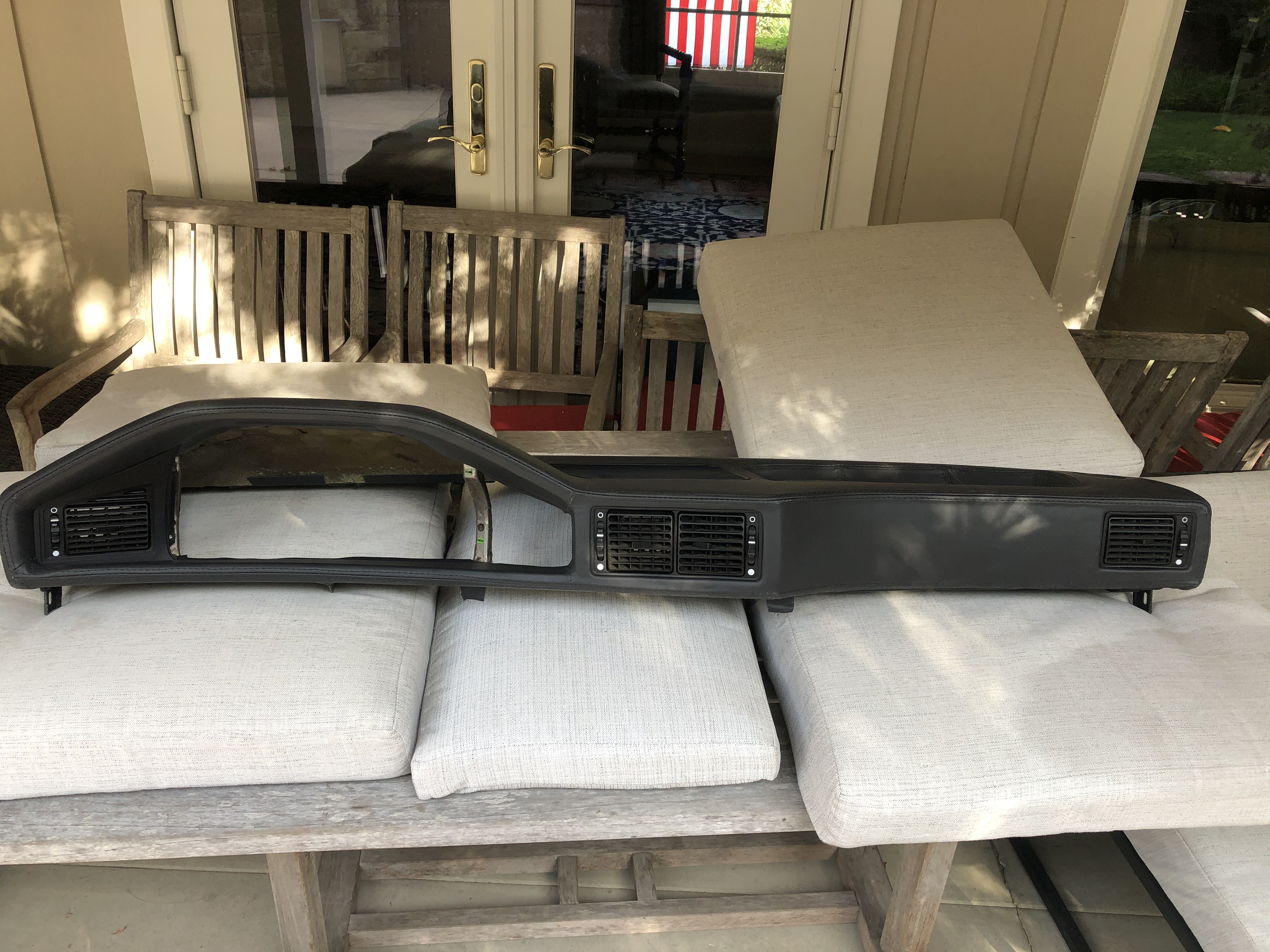 I'd like some of that lemonade you made here.

I'd also like to congratulate you on some really amazing work. This car is going to be baller!
Top

Great point. My recollection is that I was surprised that there was no washer with the switch so I then checked RealOEM ... but my memory sucks, so I'm going to double-check my work today.
Top

Great point. My recollection is that I was surprised that there was no washer with the switch so I then checked RealOEM ... but my memory sucks, so I'm going to double-check my work today.

And to be clear: DO NOT PUT ONE ON. THE SWITCH WILL NOT WORK CORRECTLY IF THERE'S A WASHER.
Top
Post Reply
93 posts