That's inspiring. Very clean. I'll have to dig out my B35 vibration dampener and pulse generator bracket.
Top

Way past time for an update.

Bottom line up front: She runs! Click that link for a very short YT video with poor sound. The bad sound is in part due to my lack of technical skills but also due to all the air that the PS pump is trying to compress. And if you said, "I thought the power steering pump is supposed to pump, you know, power steering fluid," you'd be right. Anyhow, that problem is now fixed: I pulled the PS pump belt and used a hand drill laced through the dangling belt to spin the pump till it was primed.

After getting the motor running, I turned to body, interior and other more cosmetic stuff.

First, the parcel shelf. I got a spare from the 528e I parted out a couple years ago so that I could keep the original one untouched. With my daughter's help, we stripped off the old covering, sanded it a bit, sealed it with poly, then glued new carpet on it. The carpet is 'saffron' from World Upholstery. I actually matches the unfaded carpet in the car pretty well. We also added a layer of felt to the back, though had I managed to remember that the old, large felt "blanket" actually starts on the parcel shelf we would have skipped that step. As it is, I now have two layers of felt under the parcel shelf.

Spraying the poly on the new pressboard: 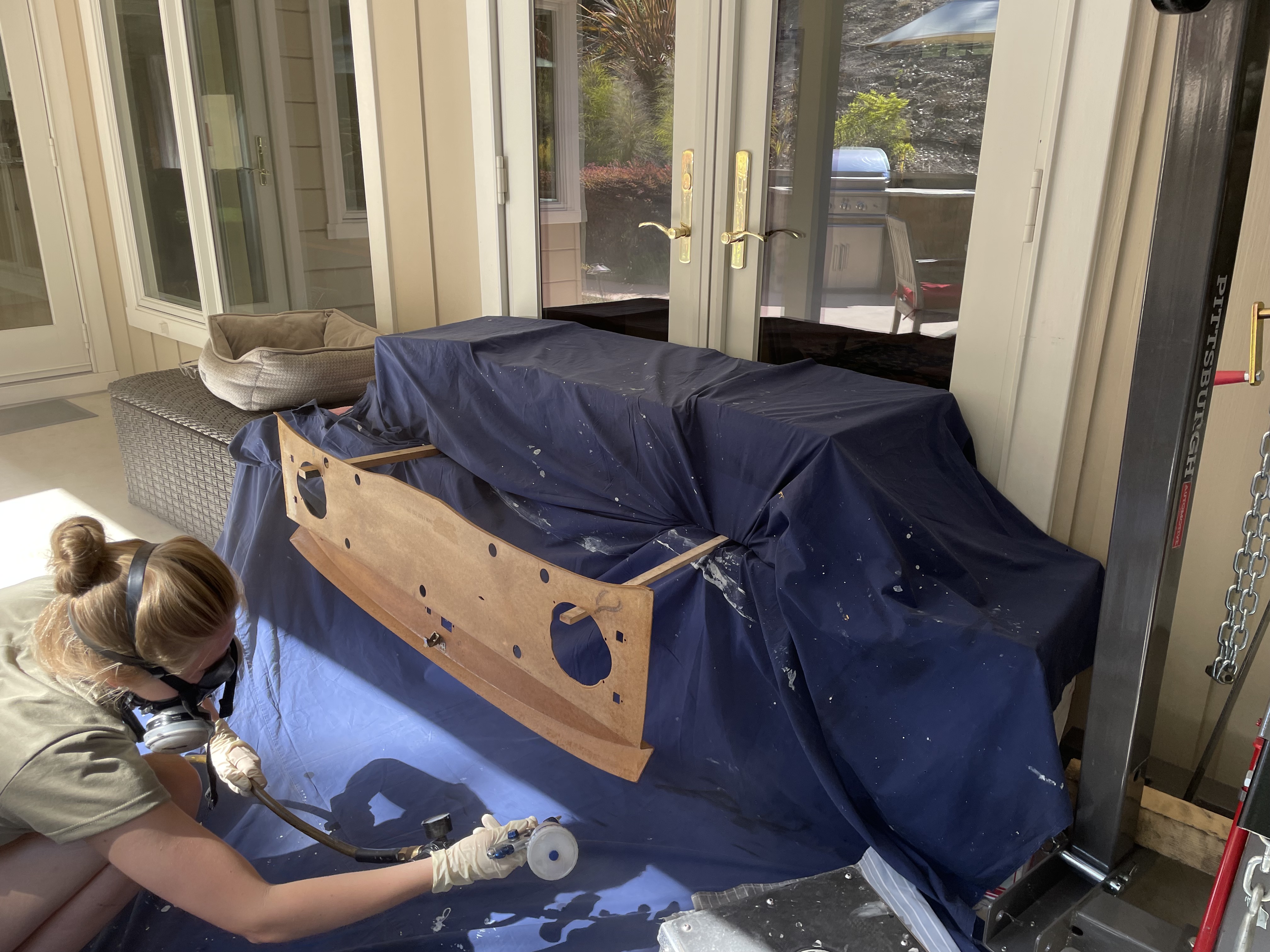 Gluing the new carpet & felt on: 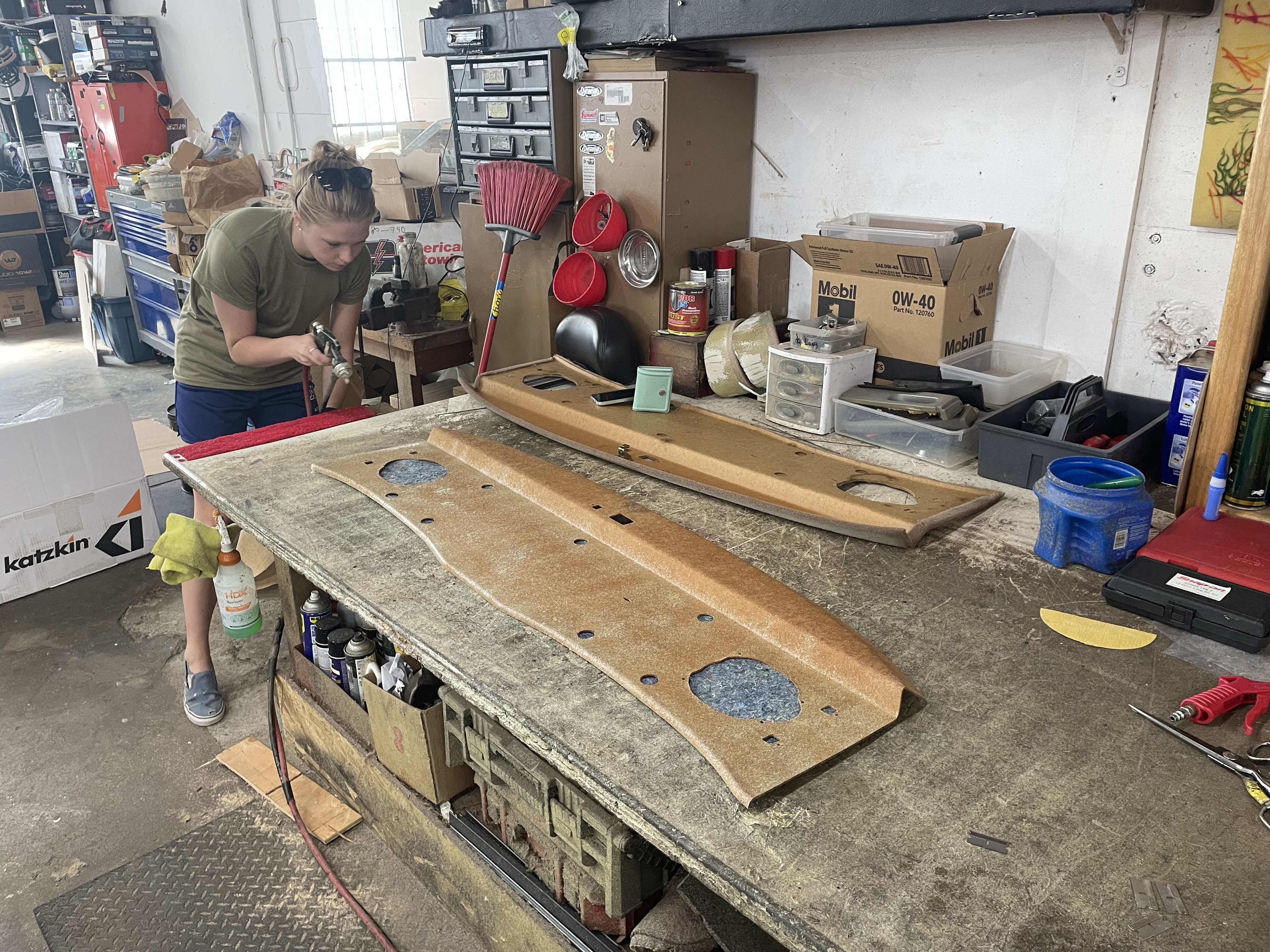 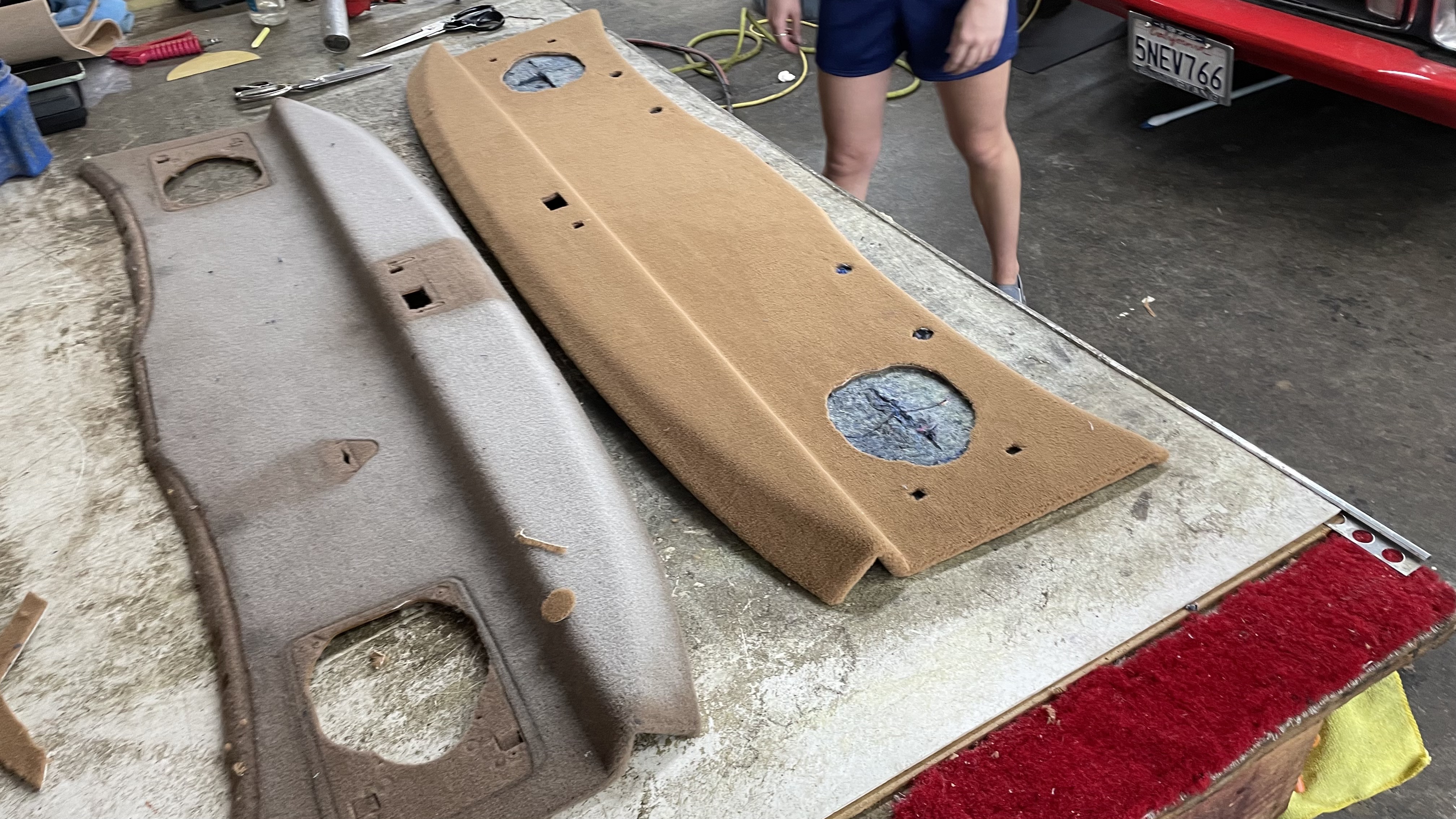 And sitting in the car with the old blanket in place. Don't you love the cool patchwork pattern I've made trying to fill in the holes left by all those no-doubt "professional" audio system installers?!? 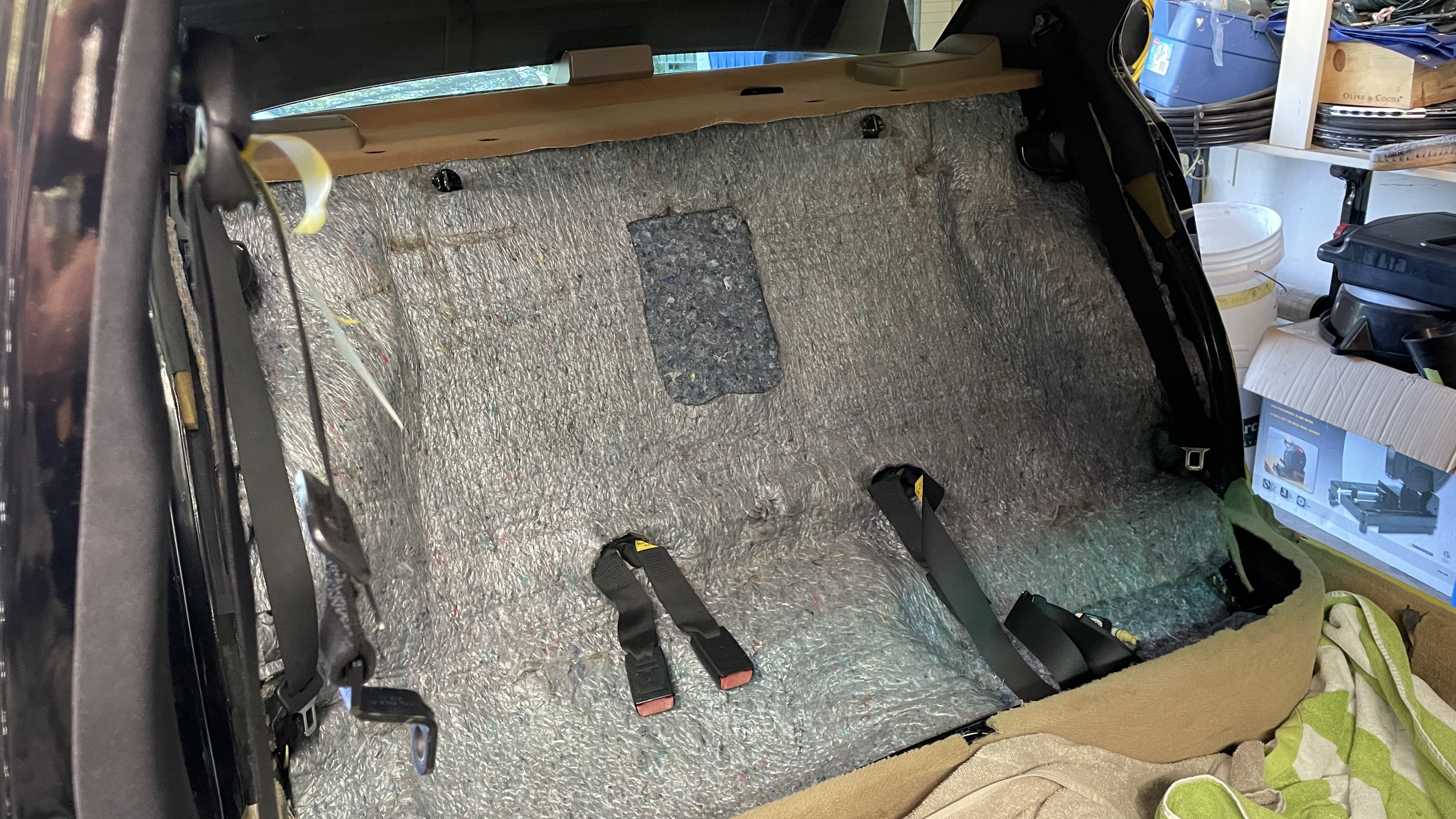 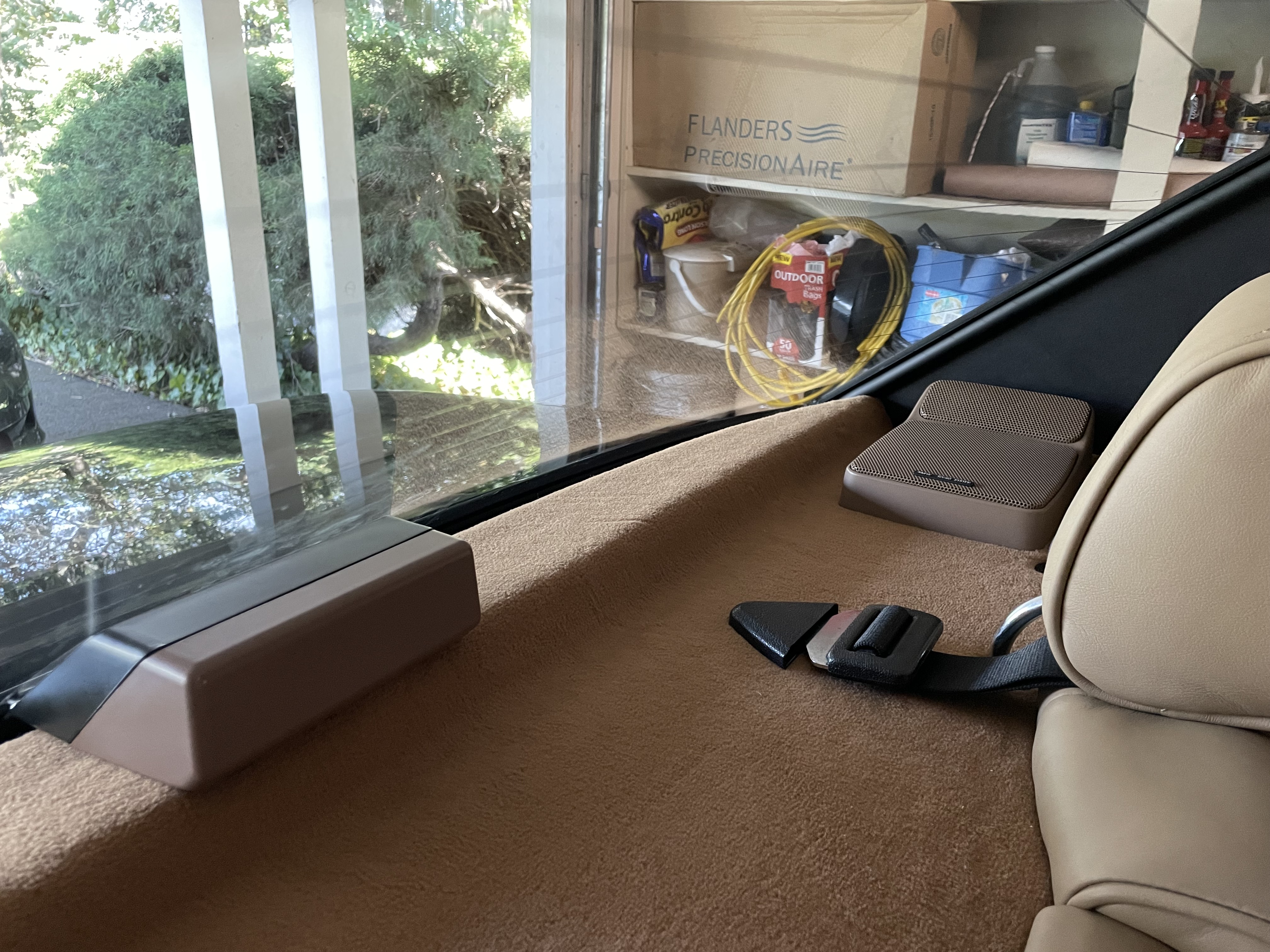 I used a cardboard test pattern to cut this piece out of aluminum plate: 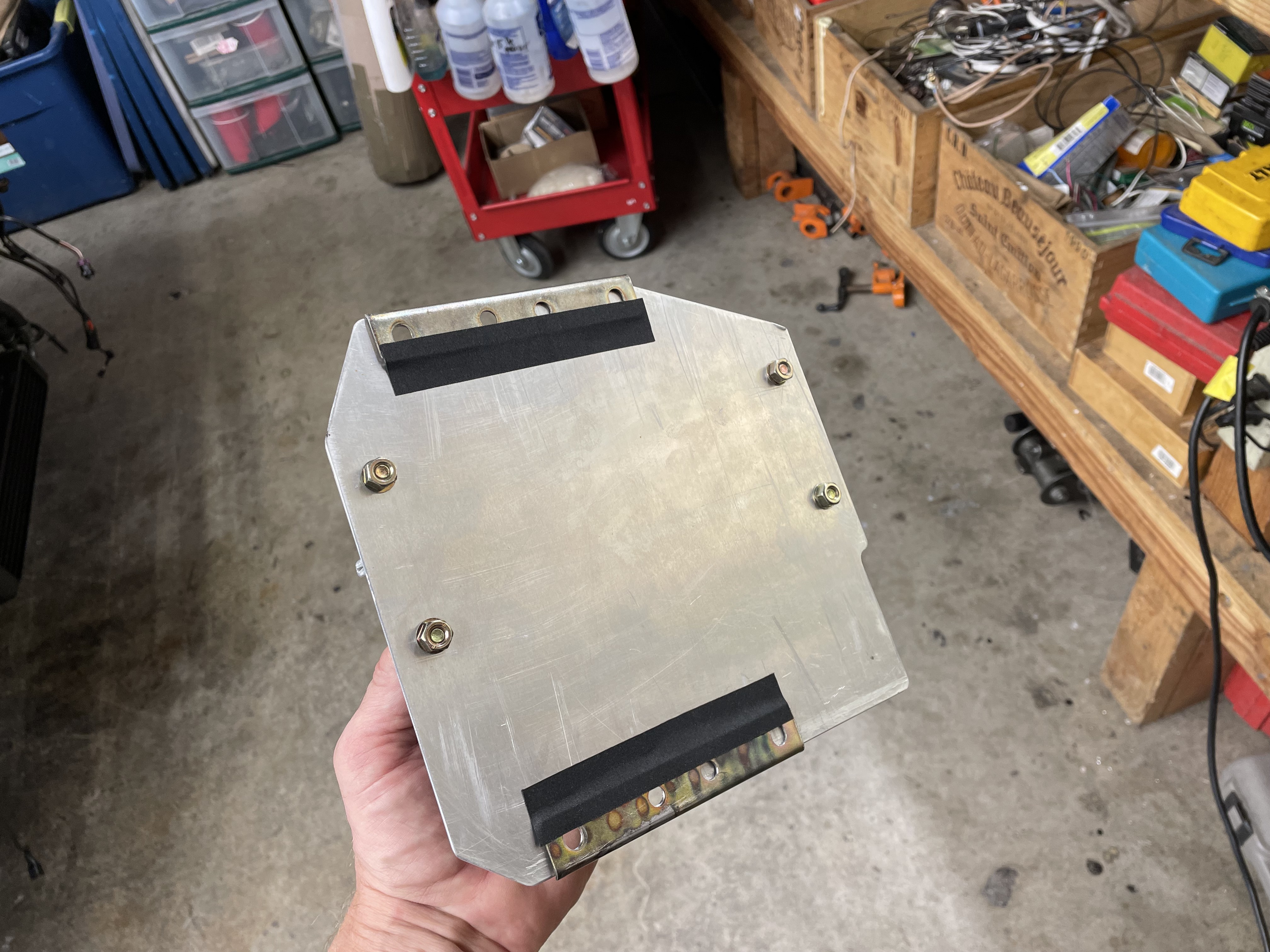 It mounts to the body above the glove box using the mounting holes from the original ECU: 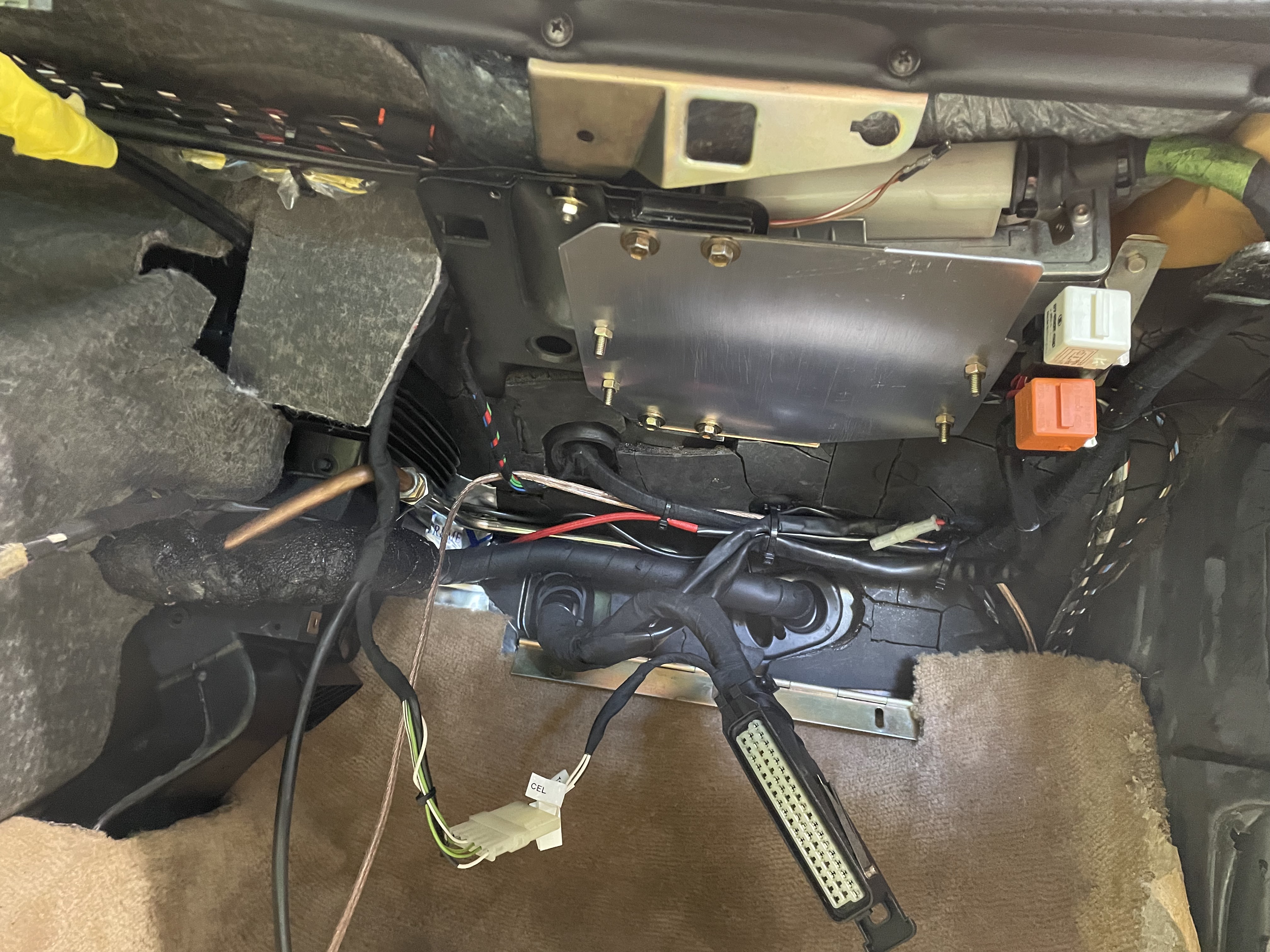 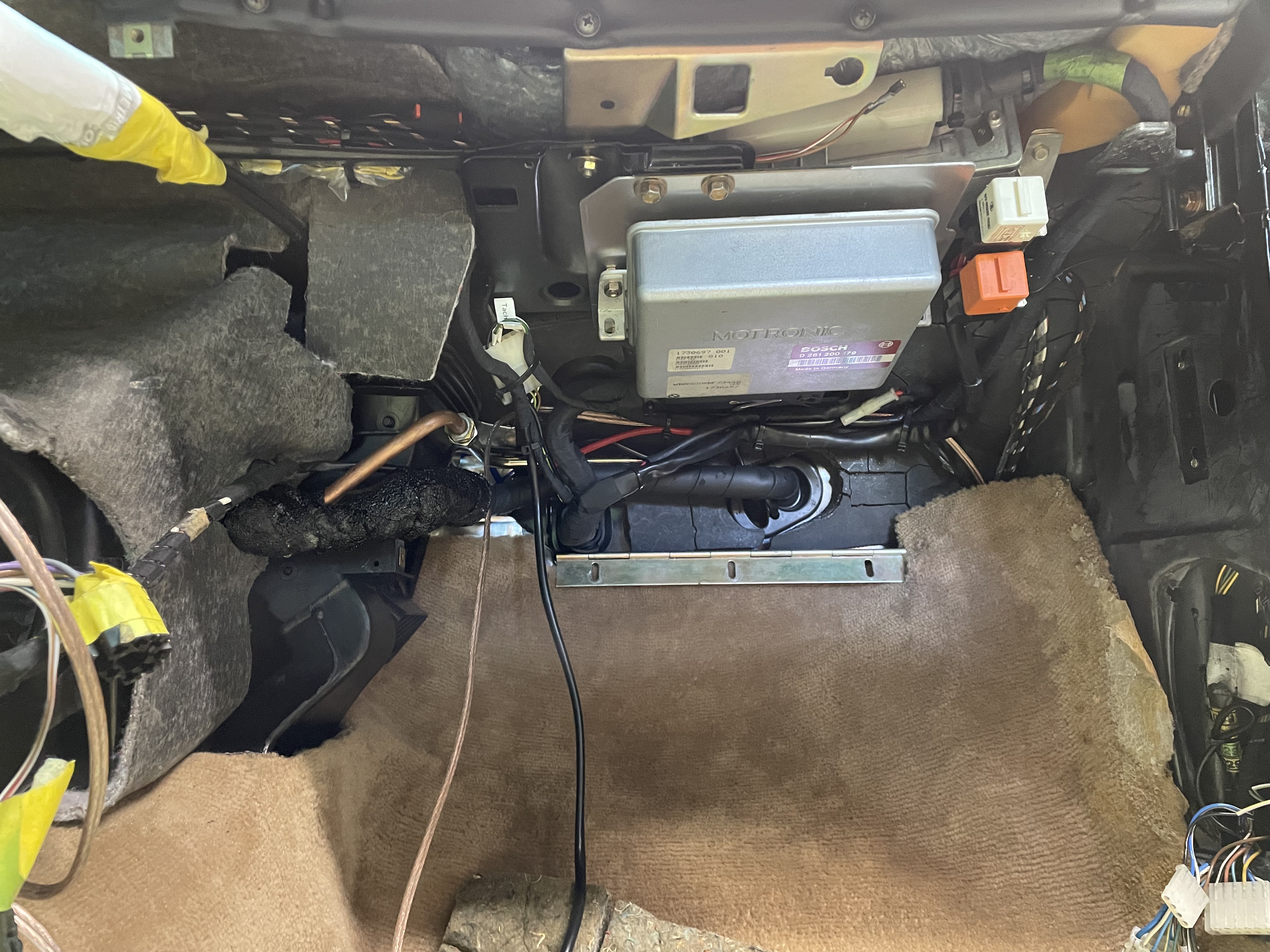 Front & rear glass is in, sealed up with 3M Bedding & Glazing compound, and all the trim pieces & lock strips are in place. Unlike last time, I put the Bedding & Glazing compound in before doing the trim & lock strip. That made it a whole lot easier to run the bead under the rubber, but it also made things a lot messier as I was putting the trim & lock strip. No pics of the mess ... sorry! The upside of the mess (e.g., all the black goo squidging out) is that I know that the rubber is definitely sealed all the way around. 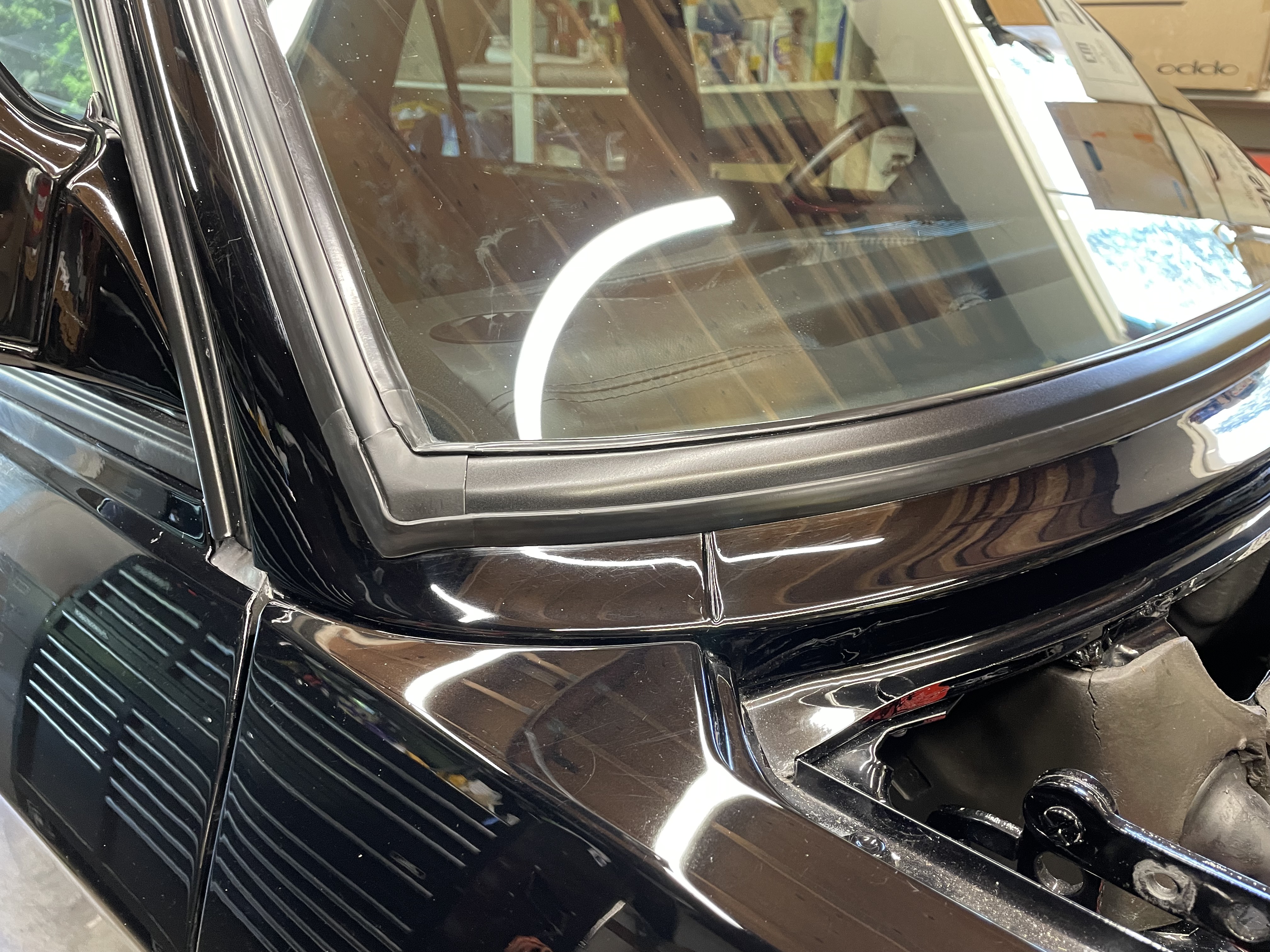 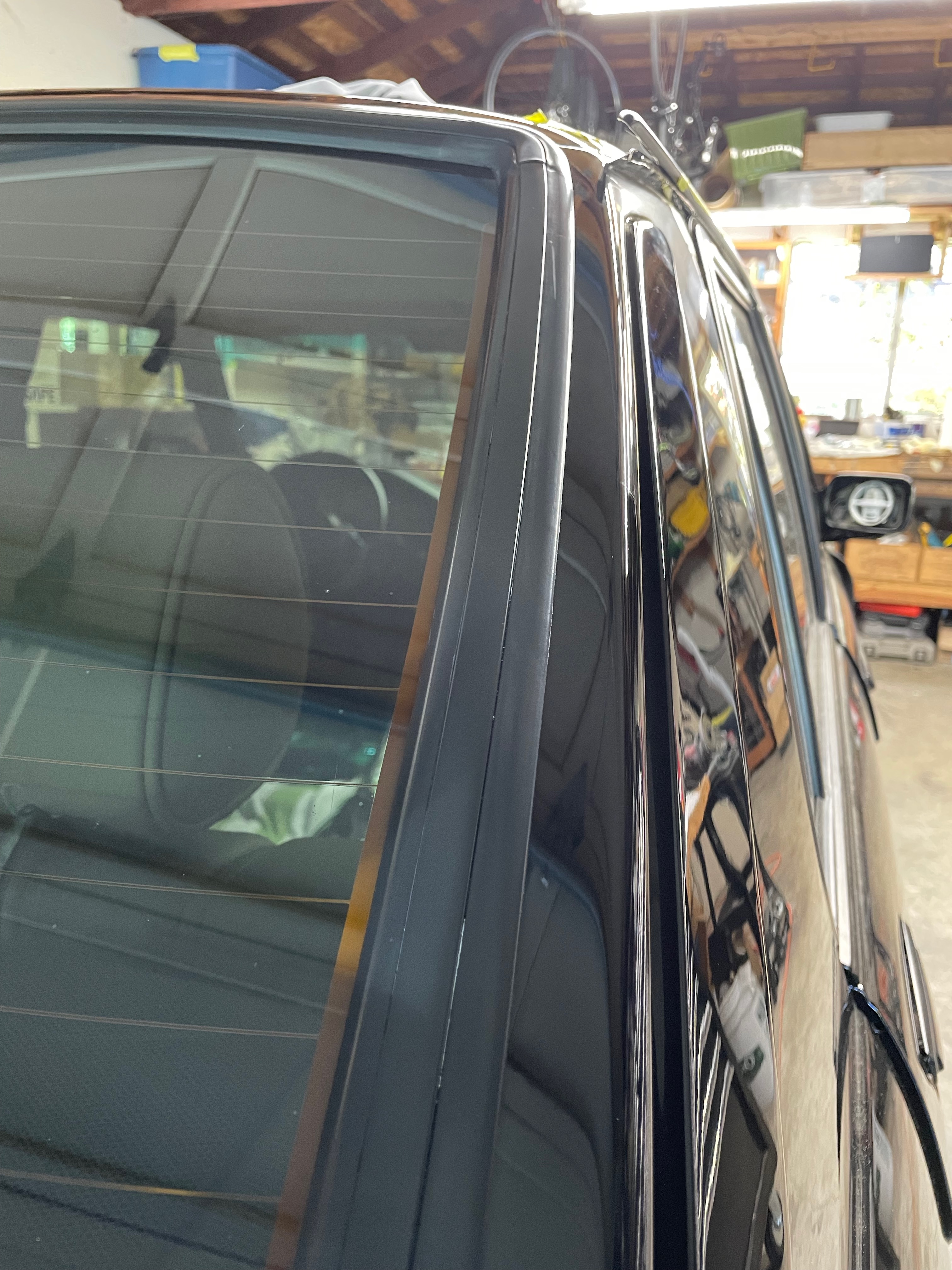 Next, in preparation for putting the front seats back in, I had bought new front seat belt receptacles ... about two years ago ... off of eBay ... where sellers think that E30 = E28. Hell, they're both old BMWs, right? Well, the E30 receptacle won't fit the E28 power sport seats because the "chicane" on the mounting end of the E28 part has an extra 15mm of offset. 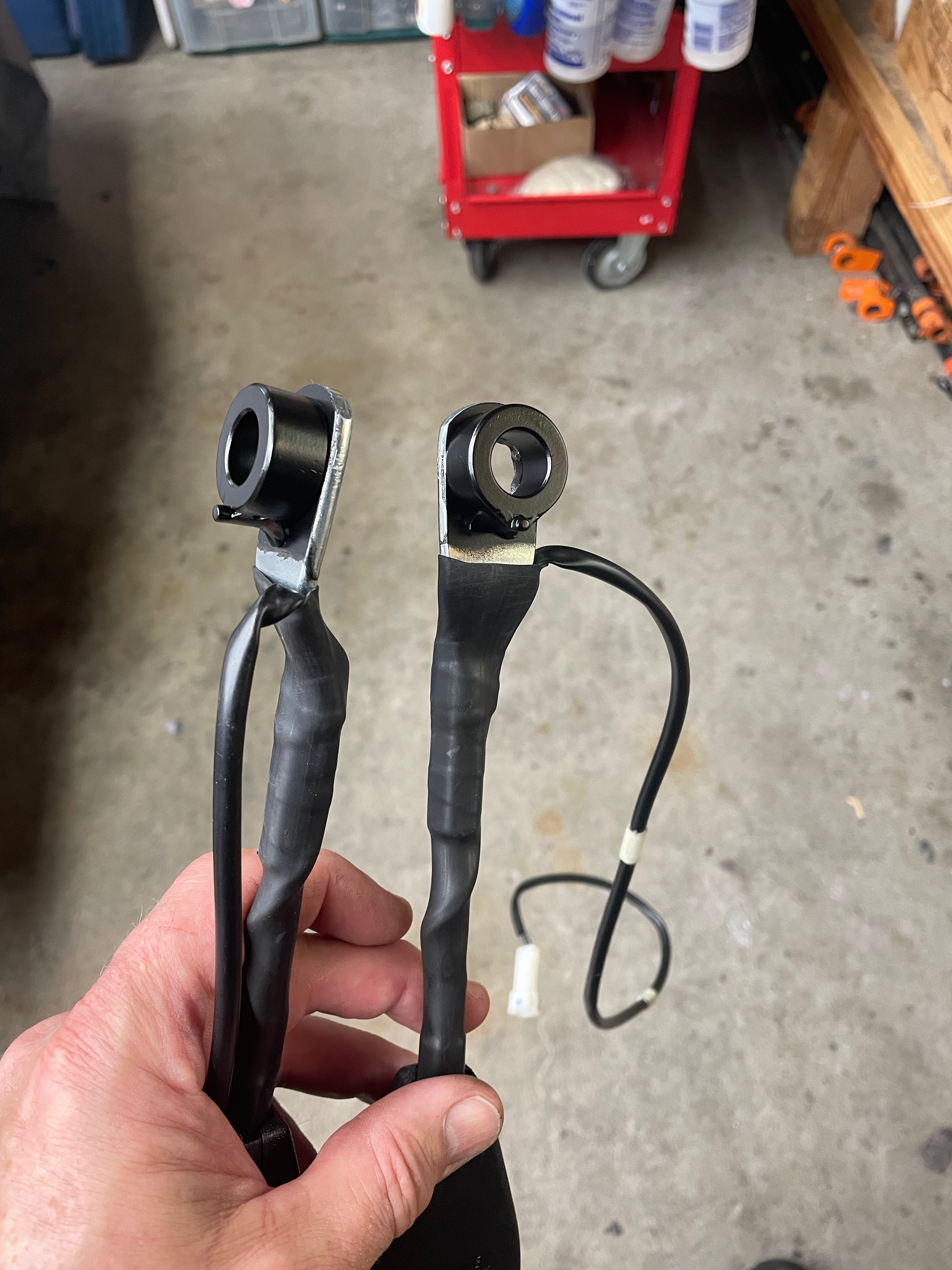 Unbelievably, the local HW store had a 15mm tall spacer with a 14mm ID that fit perfectly over the mounting shoulder on the seat. So using a set of shoulder bolts, these spacers perfectly hold the E30 receptacles with the right stand off.

Happiness is four new OEM "fuzzy" door seals. The seals are cut correctly for the rear door openings, but have to be trimmed for the slightly smaller front doors. I made this jig to hold the seals in place so I could get a nice clean edge with a chop saw: 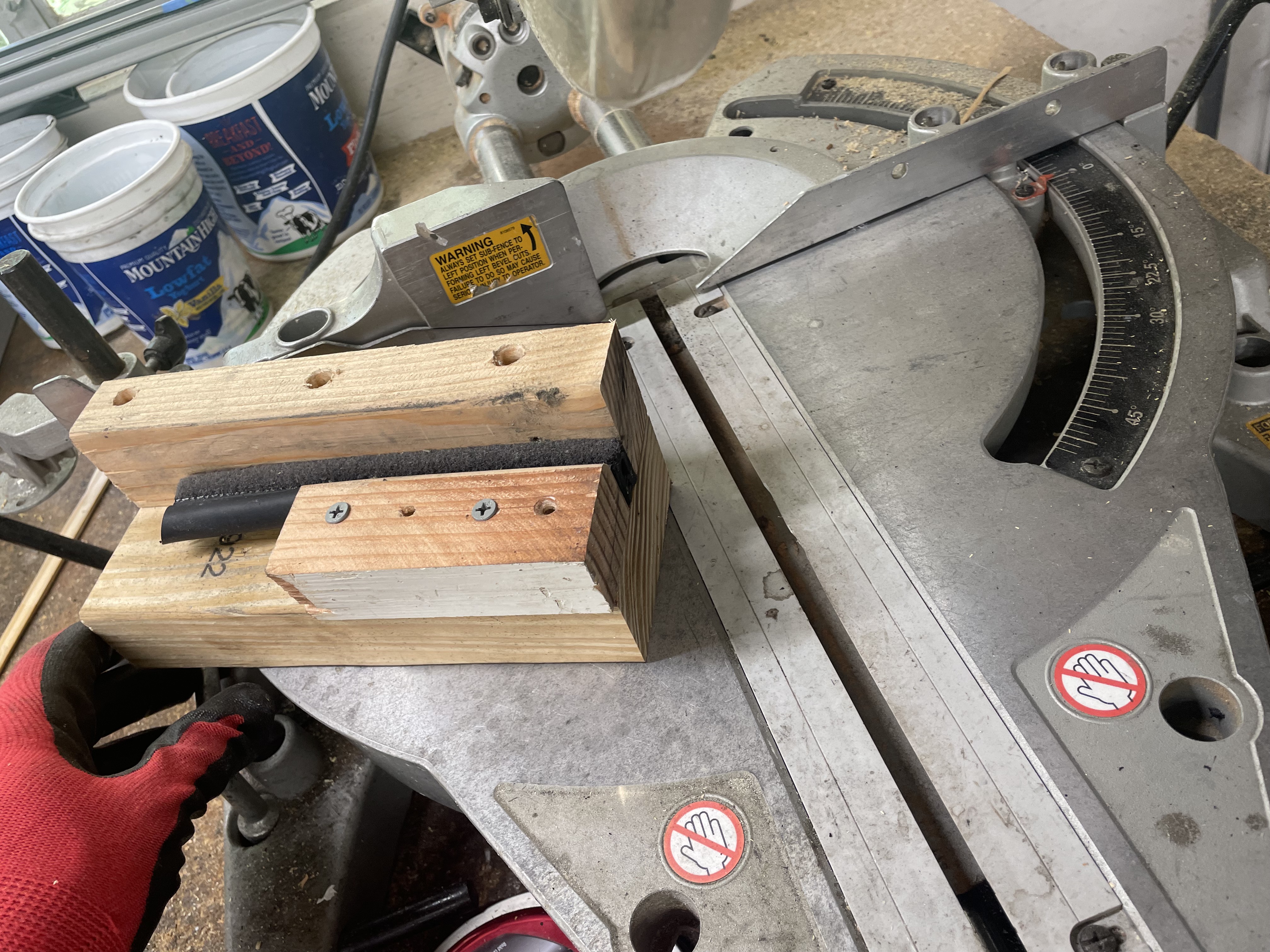 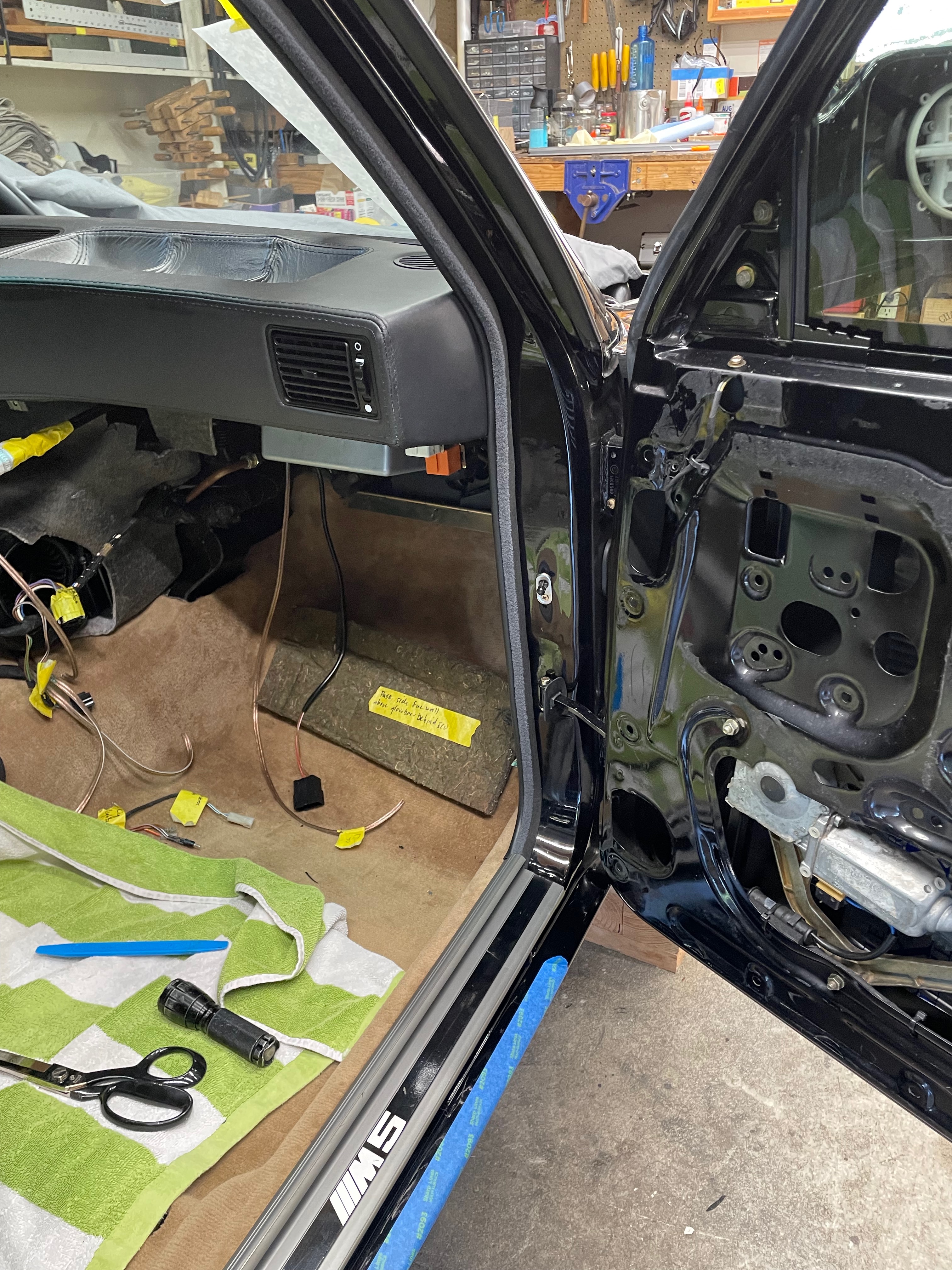 Next I turned to the euro front side lights. I modified the two-filament, three-wire US bulb holders to fit into the euro side lights: 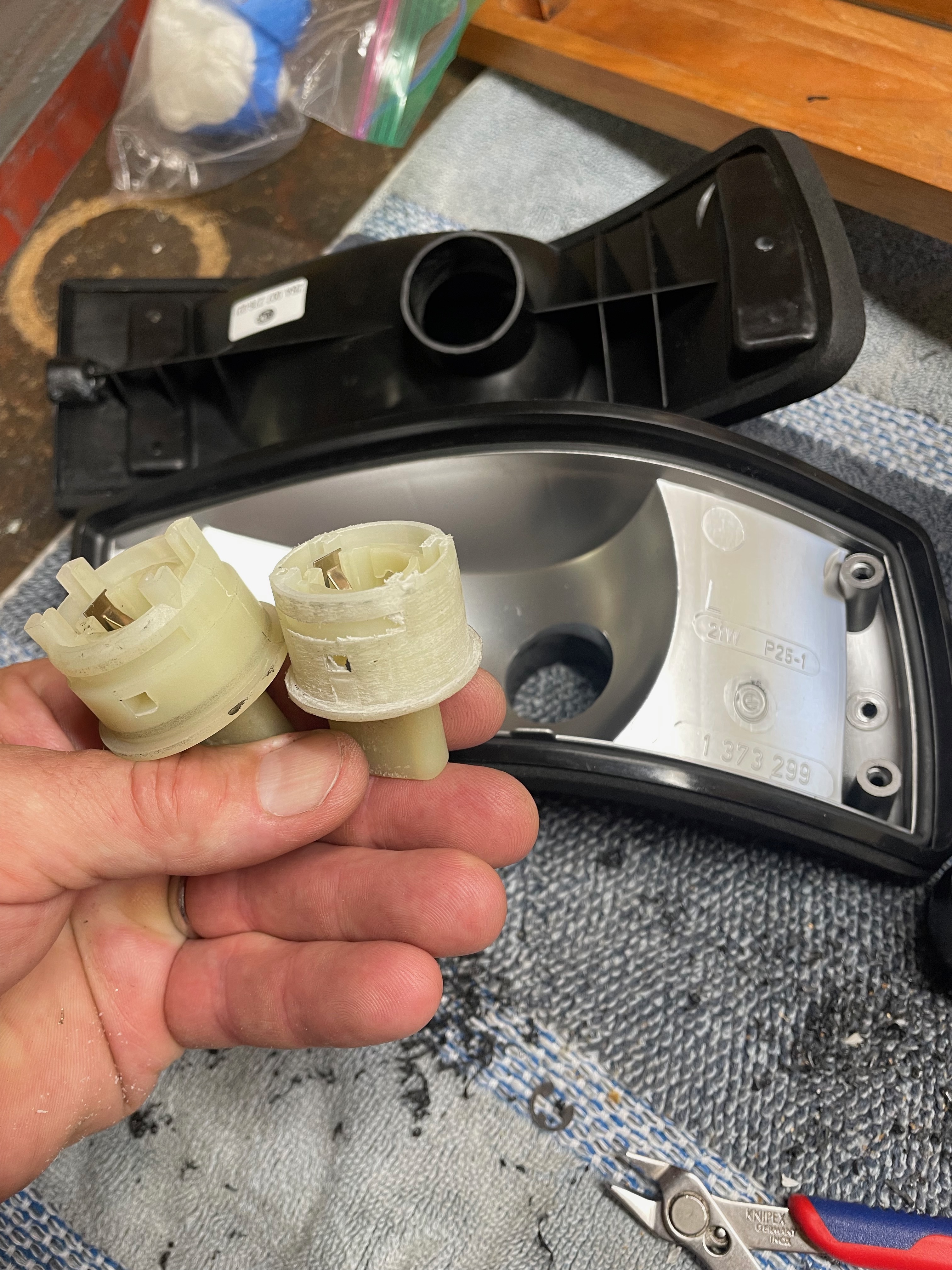 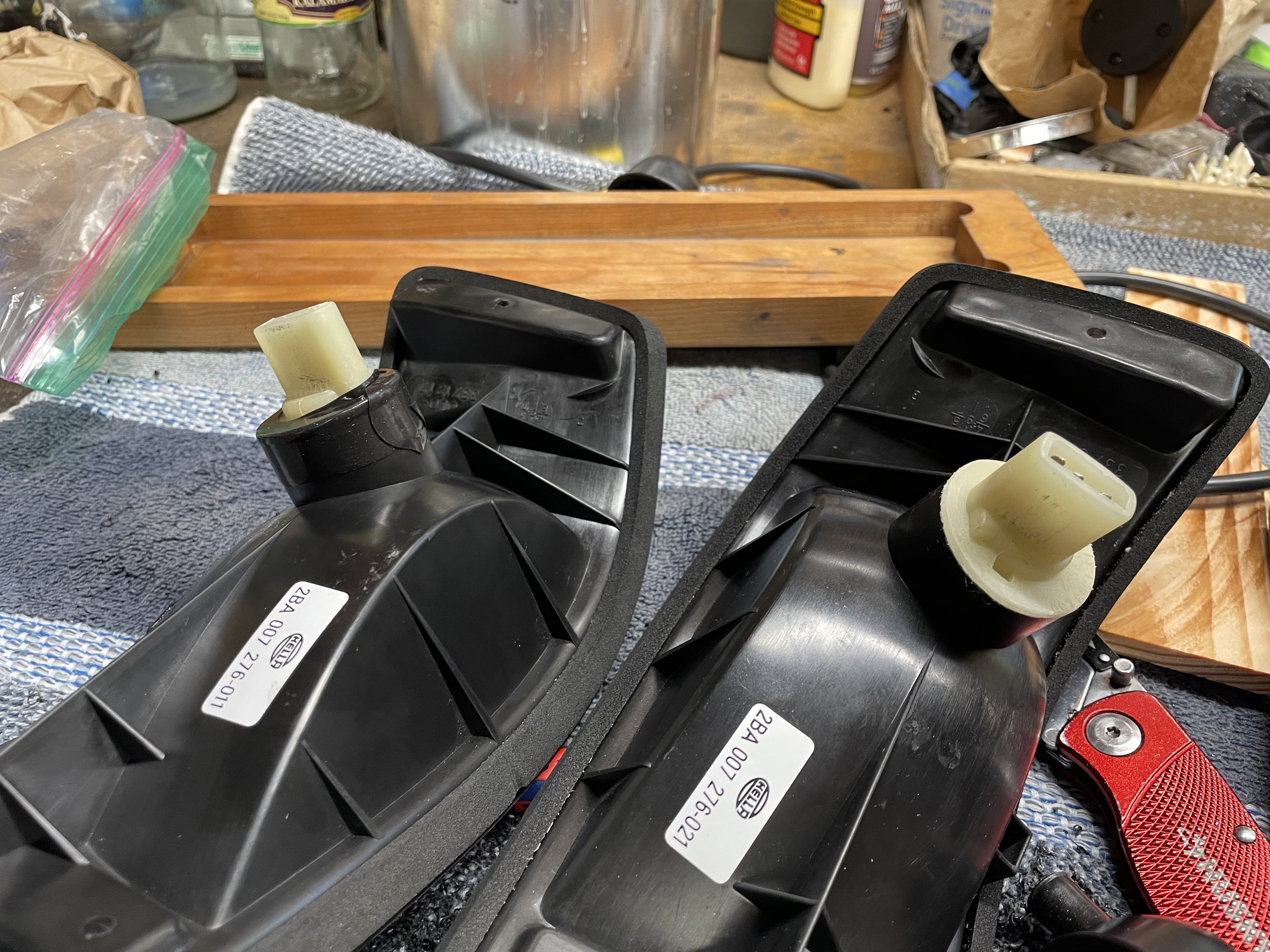 Though, as you may know, the US bulb holder when combined with the plug that comes on the wiring harness gets pretty long and runs into the bodywork behind the valance. The easiest solution I could come up with was to de-pin the harness-side plug and put the spade-connectors directly into the side light. I used a zip-tie to hold the rubber boot on. This arrangement ended up fitting pretty well. 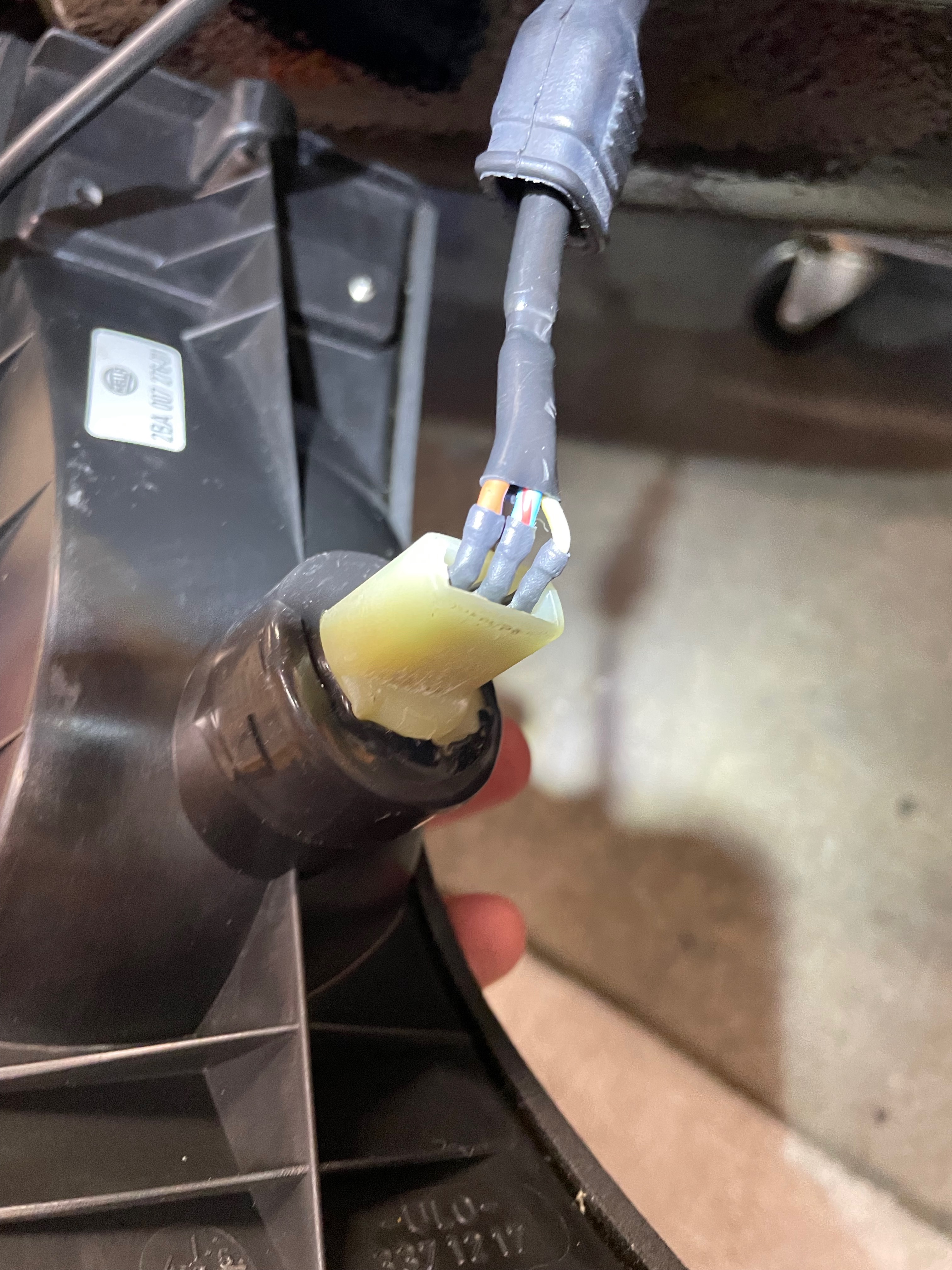 Here's the current state of the build. I think I'm really digging that yellow pinstripe stripe all the way around the front grill. Very period-correct. 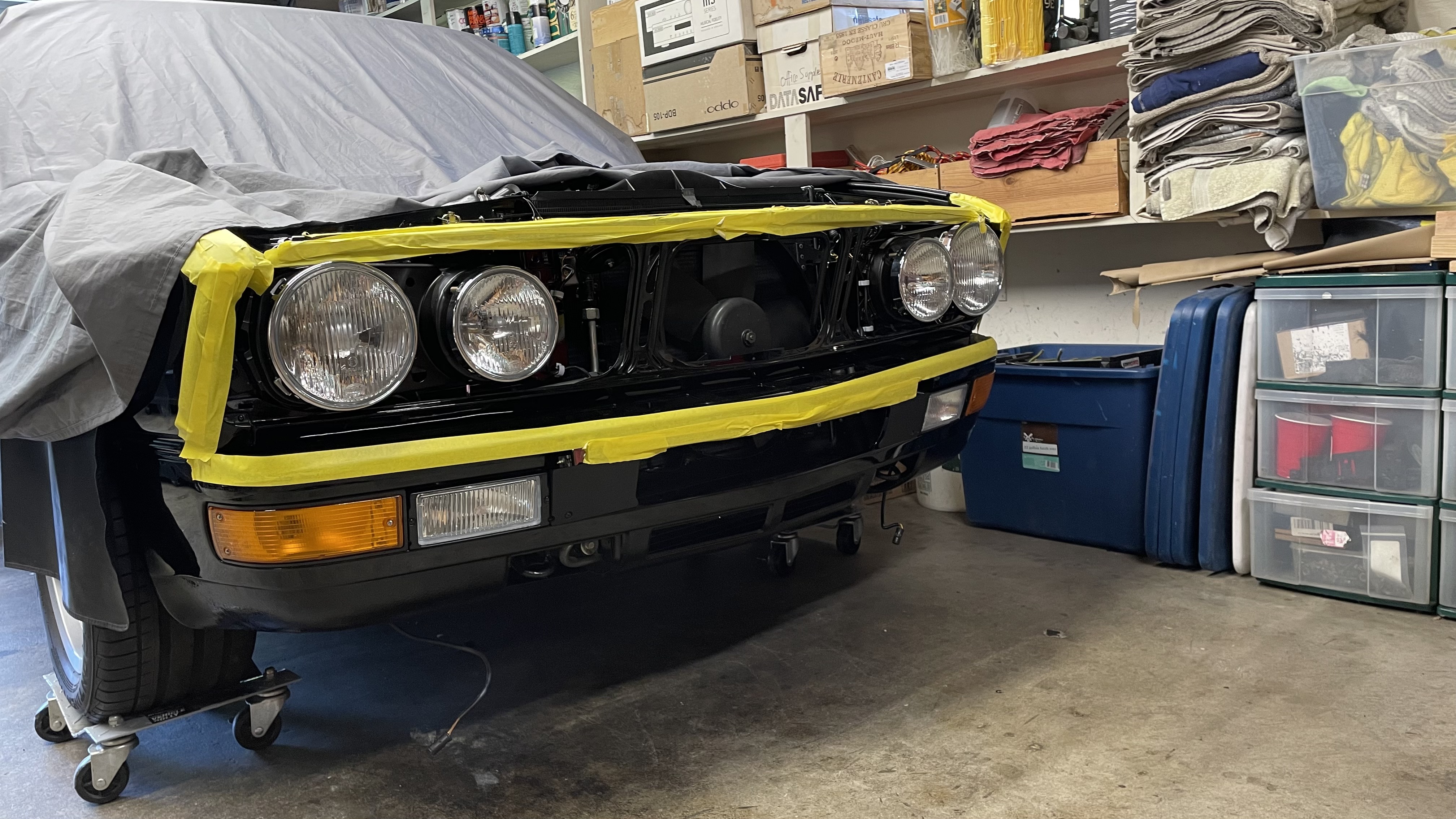 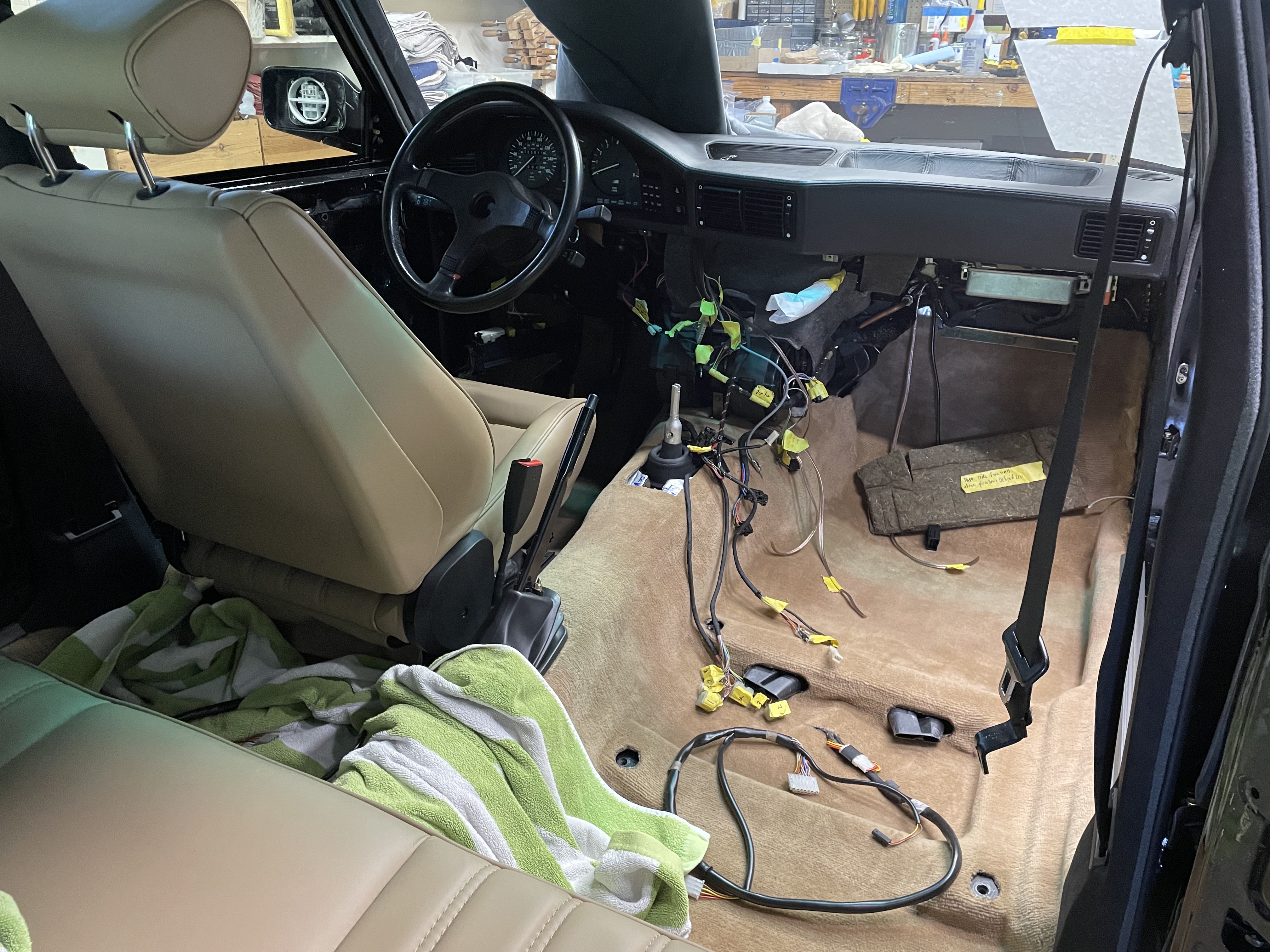 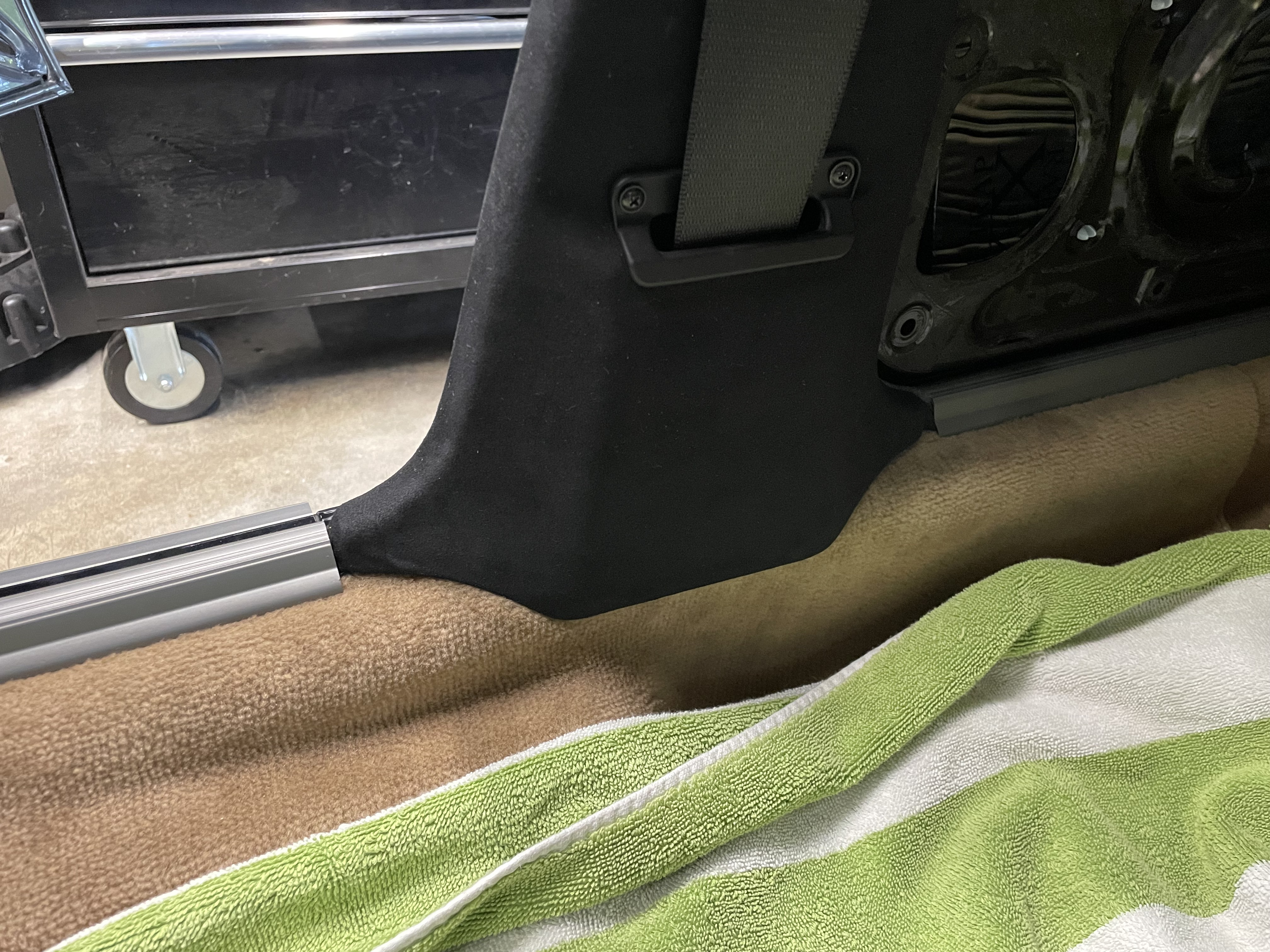 - Put hood back on
- Put Euro M5 front spoiler-chin on
- Re-bleed the brakes & clutch
- Figure out what to do about the ABS sensors; the old wire coating is completely disintegrated and new sensors seem to be about $200 per corner
- Complete the wiring connections in the dash in preparation for the first drive. Plan here is to mount the minimum that will allow me to safely drive around the block but still allow me to trouble shoot issues later without having to keep taking the driver side knee bolster & glove box off. I'm hoping not to put those on till the car really seems to be running right.
- Line up some kind of help to tune the Motronic 1.3 set up. I think I have a dyne guy in Seattle that's very familiar with these M30B35 & S38 motors. Fingers crossed. And fingers crossed we can do a good tune remotely. Trailering my car all the way to Seattle isn't realistic.