After nearly 5 years the car is off jack stands. Finally figured out where and how to mount a brake fluid reservoir. Used one from a '95 540i Touring from Iceland. The OE reservoir didn't fit due to the throttle body spacers pushing the intake plenum ~1" toward the drivers side of the engine bay. More pics later under the hood. Still more wiring and plumbing to finish. 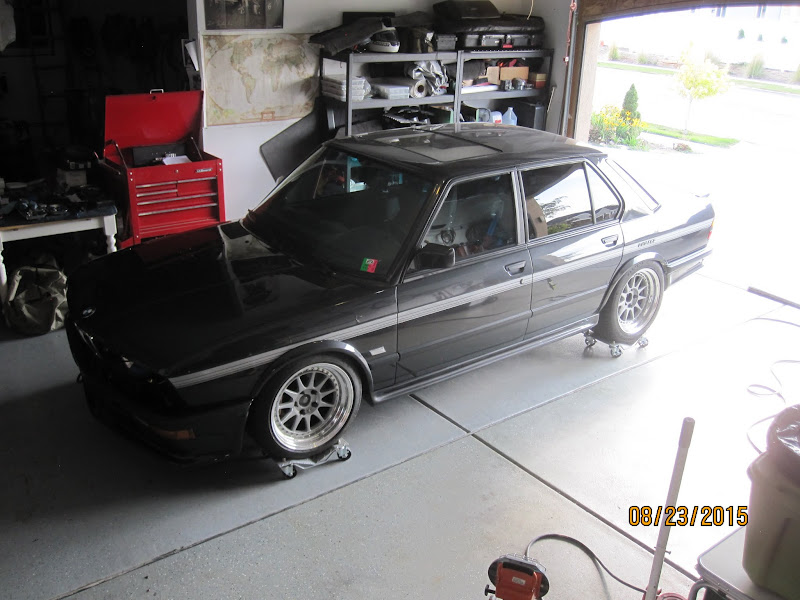 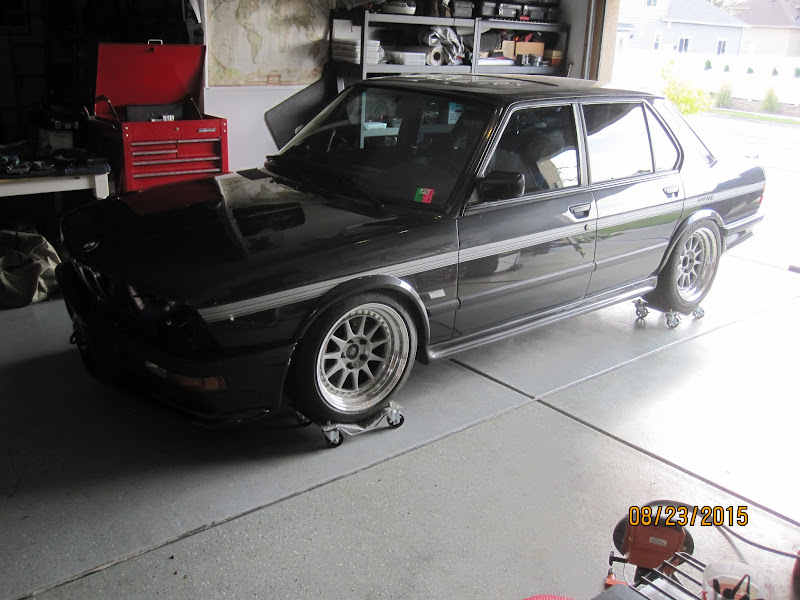 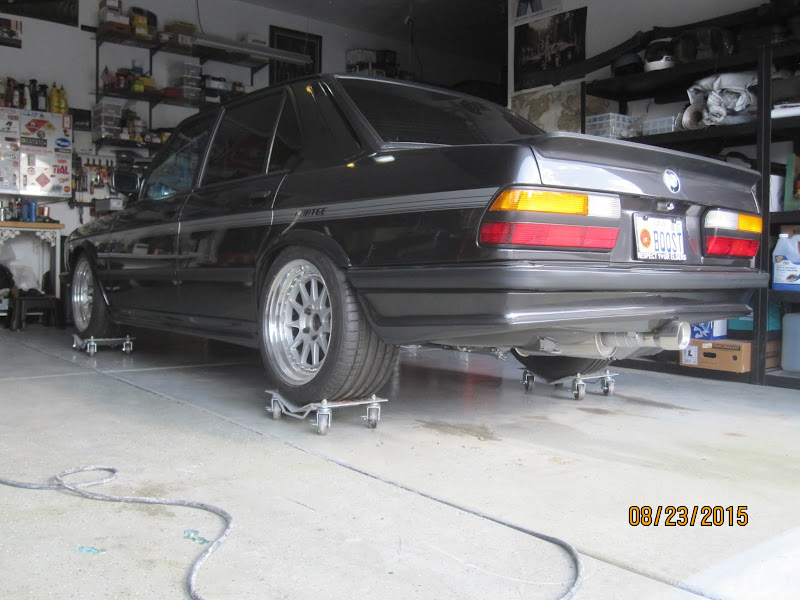 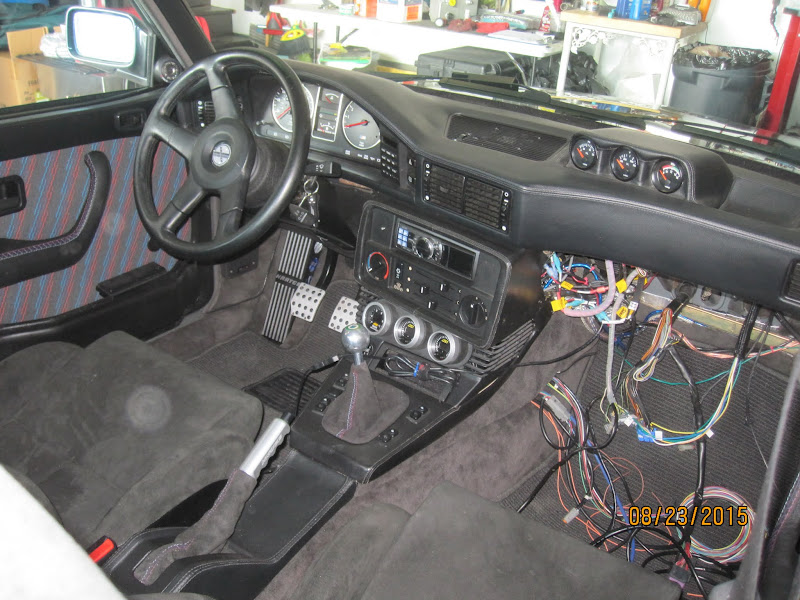 Congratulations, Mike! The car looks stellar! Looking forward to more under-hood photos. I have to say it's almost crying for the Hartge rear wing though.

When I heard they were closing Miller Motorsports Park, the first thing I thought of was that you weren't going to get to use your car there. I guess the Chinese bought it and plan to keep it open, so I guess disaster averted?
Top

Chris, you're right. I've considered the wing. Had an opportunity to pick one up from Paul L but decided to pass. He calls it the "love-hate". I still prefer the more subdued M-Tech spoiler.

Without the motorsports park I would have been left to the remote highways. Glad someone bought the park since I'll need to learn to drive this car again. My DD is the opposite of what I'm hoping this car will be performance wise.

The brake reservoir idea came from an E30 v12 swap project from Iceland I believe. I saw a build post somewhere, it was several years ago, and noted the BMW reservoir didn't sit directly above the master cylinder. The owner had used an E32/E34 set up that had plastic 90 degree fittings and hoses that allowed the reservoir to be mounted several feet away. The reservoir is NLA so it took a while to source one. Oddly enough the one I found was in Iceland also.

Good to see more progress on this!!
Top

So, how close are you to getting this thing going?
Top

God must have calmed down a bit...
Top

Yes, things have calmed down a bit but are starting to pick back up.

Because of the additional power needs (fuel pump, boost control, electric fan, etc...) I'm adding a supplementary fuse box and relays. The ARC 4000D should do the trick: http://www.summitracing.com/parts/arc-4000d

Been working through some wiring issues. Here's how the project stands currently. Everything is pretty well sandwiched in there. Still routing wires/hoses and getting everything sorted. The drivers grill needed a good amount of trimming, as did the drivers headlight mount. Nothing visible from the outside. Broke and ordered a new hood latch assembly. Still waiting on some misc. bits from Pelican.

First shot of the wheels mounted with the bolt covers installed. Had to trim the wheel studs a bit. Also had to remove the 10mm rear spacers. Put those up front for a wider track and notched the trailing arms to fit the beefy 275's in the rear. Otherwise I was looking at some serious modification to the rear fenders that are already rolled nearly to the point of cracking the paint and warping the M-Tech flares. It wasn't until I got the car on the dollies that I noticed the rear tires would rub inside the fenders when the springs were compressed. Also had to space out the rear struts 1/4".

Barely noticeable in the shot of the passenger front wheel below is an aluminum baffle protecting the air intake from being doused by the tire when it rains. Don't want to overtax and rely entirely on the filter wrap. The molded aluminum plate is riveted in place just below where the charcoal canister was and gets air channeled in from the brake duct in the Hartge spoiler with some help from an OE M-Tech funnel in the same manner the Mocal power steering cooler gets its air on the drivers side beneath the Braille battery and TD washer tank.

Installed the Racing Dynamics strut tower bar and the custom overflow/vacuum canister. Both the canister and intake plenum were powdercoated after modifying the canister with a notch to keep some distance its front corner and the negative terminal on the battery.

Thanks to ahab and Chris for information on the M5 engine wiring harness I'm making some progress in that arena. 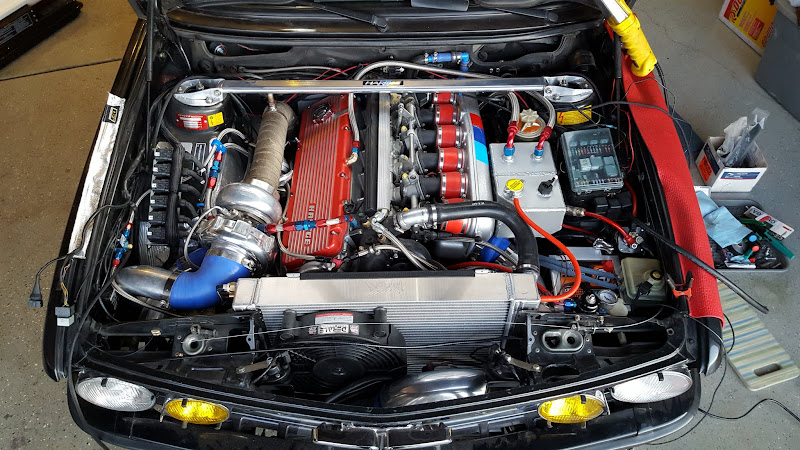 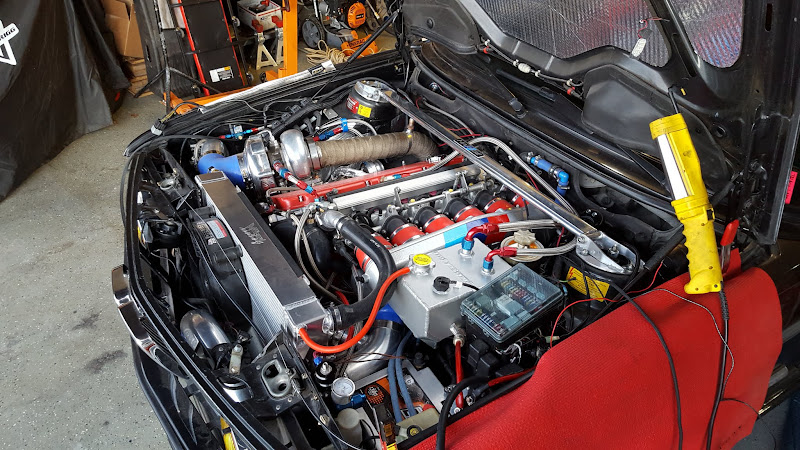 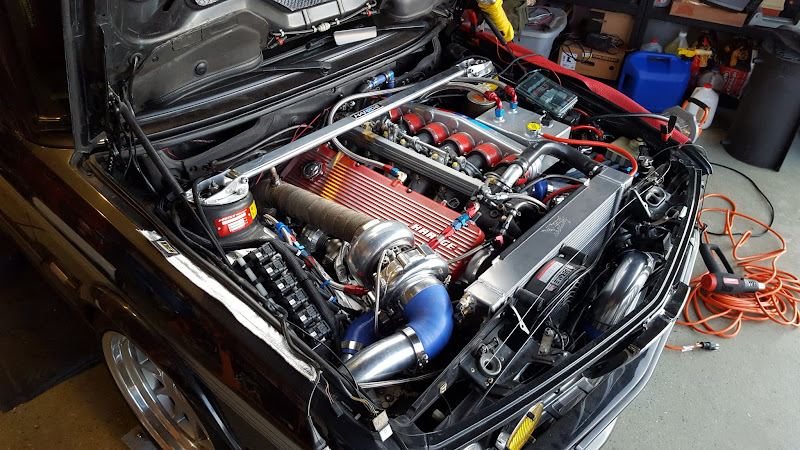 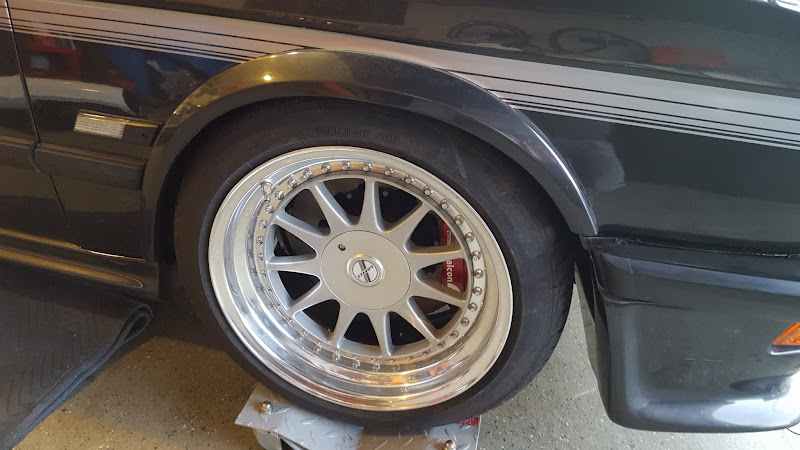 I also going to build a Hartge H35 e30 with m30 with itbs and turbo. I will have to read this awesome build especially the m30 build. I love all the Hartge parts on your car. Looks like you might need Hartge shift knob and Hartge mono wiper?
Top

Congratulations on this Epic build. So much great, custom work on this car- Thanks for the thread dedication.

Yes. When I bought the car in 2007 from 'alpinass' it had a reproduction Hartge front spoiler. I've added a few more bits along the way.
Top

I am disgusted at how sick this build is. Nice work.
Top

It looks amazing in the engine bay. I'm wondering if you can post some pictures of how the intercooler is routed
Top

How do we all feel about the relocation of the brake fluid reservoir to the left-front? It was my (relatively un-educated) opinion that this is dangerous. A hit there will will result in loss of brakes.
Last edited by cek on Jan 04, 2016 9:31 PM, edited 1 time in total.
Top

Well, that's brake fluid, actually, and it won't result in a loss of brakes if there is still full fluid between the master and the calipers. A fire is possible, but a fire is always possible.
Top

Curious are you running the stock mechanical fan, It doesnt seem like it with the thick radiator. On a side not i noticed a five degree drop in temp when running the stock shroud that goes from the core support to the radiator. I run the stock cooling system with a south african radiator in arizona and barely keep the temps at 195. Im just curious to see if the thick radiator with no mechanical fan but a pusher fan will outperform the stock cooling.
Top

wkohler wrote:Well, that's brake fluid, actually, and it won't result in a loss of brakes if there is still full fluid between the master and the calipers. A fire is possible, but a fire is always possible.

Found the intercooler part. Now also curious in the cooling without shroud and fan
Top

I found that running the shroud brought my temps down about 5 degrees, but still my turbo struggles to run at 195 in the az summer. This is with all new stock cooling components with a south african radiator. While that radiator is thick, im curious if it will have enough of a pressure difference across it to beat the stock setup.
Top

wkohler wrote:Well, that's brake fluid, actually, and it won't result in a loss of brakes if there is still full fluid between the master and the calipers. A fire is possible, but a fire is always possible.

If he keeps the brake bomb in place (I can't recall if he removed it), it would seem he should have power brakes for a good 10-20 emergency stops before the loss of fluid matters.
Top

The brake bomb works on ATF, not brake fluid.
Top

tschultz wrote:If he keeps the brake bomb in place (I can't recall if he removed it), it would seem he should have power brakes for a good 10-20 emergency stops before the loss of fluid matters.

As Chris said earlier, all that really matters is if there's still fluid in the lines between calipers and master cylinder. The accumulator (bomb) provides a pressure reserve for the power assist, not fluid. If you get hit hard enough to take out the reservoir, it's unlikely that you'll need brakes tough. The car will be on a flatbed.
Top