Scottinva wrote:My m30b35 stock head flows 230CFM at 28" of water, at just under .5 lift (can't actually get there). My head flows more at .4, than yours does at .5 Something isn't adding up, when I did research that was what I saw other stock ones flowing as well. Yours seems low, I question there testing procedure or something about that cylinder head. My goal is around 250cfm.

Murfinator wrote:Max CFM for this setup was 1156 CFM and we all know the car made 700+ HP.

No sir, it did not. Please refer to Ken regarding a discussion we had about correcting turbocharged dyno numbers for altitude. His numbers are still very impressive, but not 700+.
Top

Nice build. Interesting choice in pink tops, why not larger?

What is your intended goal or are you building a trailer/dyno queen?

Make sure you can change the plugs without removing the turbine. If not it makes changing soaked plugs (during tuning) an hour and a half long procedure.
Top

65# injectors will supply 500hp all day with sufficient overhead. If they prove inadequate it's an easy swap.


What is your intended goal or are you building a trailer/dyno queen?


Make sure you can change the plugs without removing the turbine. If not it makes changing soaked plugs (during tuning) an hour and a half long procedure.

Cool name. How was it dervied? Has an interesting ring to it rather than something involving Cowtipping.

Nebraska_e28 wrote:Cool name. How was it dervied? Has an interesting ring to it rather than something involving Cowtipping.

I edited my OP with a new paragraph. I'll add it again here for those already familiar with the build and skip the earlier posts:

"Perhaps due to my surname of Murphy, the law of the same name -Murphy's Law- has been in great affect in my personal undertakings. For this reason I've researched each aspect of the build over and over and sought the advice of those who've been there and done that. Many of these fine gentlemen have spent many hours on the phone and via email answering questions and elaborating on their writings as they pertain to this build. Despite this the gremlins will continue to do their dirty deeds and make life hell. With this as a cue I've decided to name the car: God's Vengeance. The name is apt because I've felt punished for attempting to create an automobile that excels at most everything: performance, comfort, amenities and aesthetics. Can one have the best of all worlds, have the cake and eat it too, in a single car? Perhaps not, but we shall see... "
Top

Very nice and clean build but when you trow so much money at an engine why not use a S38? A M30 head is never going to flow like a S38 head.
Top

All the colors will make up for that. And the name too. Mostly the name.
Top

Jelmer: True, a B35 may never flow as well as an S38, but does it need to? Let's say I make between 450 and 550hp at the wheels with the current setup. Do I really NEED more power? Most likely any increases in power will only spin the wheels faster. Besides, while keeping the pressure < 1bar I'll retain sufficient power to romp on the vast majority of vehicles on the road. Vehicles with > 500hp tend to require extensive maintenance and require frequent rebuilds. The drivers also tend to get stupid and exacerbate the situation trying to show off. Rather, my goal is tractability and reliability to go along with the power increase.

While contemplating this build back in 2010 I came across David Vizards 'How To Build Horsepower'. In the chapter on cylinder heads there's a graph comparing flow efficiency of 1 vs. 2 valve heads. D is valve diameter vs. curtain area: 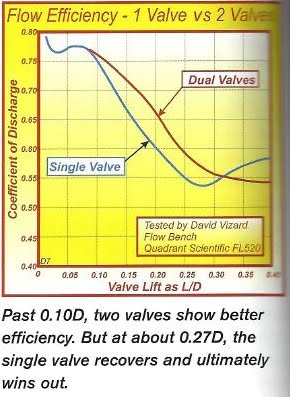 The 12-valve cylinder head may never out flow the 24-valve head but if it makes an easy 500+hp at the wheels then I've achieved my goal. I'd be willing to bet that two nearly identical cars: one with 500 and the other with 700hp, piloted on the same track by any driver but a professional would average near identical lap times. My point is, the additional power to be gained with the S38 vs. B35 is useless with the exception of bragging over dyno charts. Dyno numbers don't mean shit when your E92 M3 gets passed by a 23 year-old 5 series at the motorsport park.
Top

Murfinator wrote: Dyno numbers don't mean shit when your E92 M3 gets passed by a 23 year-old 5 series at the motorsport park.

Yes, 500 hp is your goal. With an S38 you get there pretty easy and you don't have to buy a different camshaft.

But keep up the nice work, the build is very clean!
Top

Tammer in Philly wrote:I'm really enjoying the build, but I'm going to offer my standard cautionary note. While I think tracking a street car is a fine idea for novice and intermediate drivers who are generally pretty slow, and it's a great learning experience that really everyone should do at least once or twice. However, if you are going to the track with regularity, the game changes. You're no longer a novice, so you're probably horsing the car around pretty well, carrying some significant speed into and through corners, and driving near the limits of adhesion most of the time. You're at the track frequently, so even if the probability of a mechanical or mental failure on a per-event basis is the same, the likelihood that you will land on the wrong side of that coin toss is higher. And since you're going faster due to that experience, the penalty will be higher.

You are building what will be a very fast car. If you really do get to the track 10+ times annually, please consider buying or building a dedicated car with the full complement of safety equipment. 25-year-old 3-point belts just don't cut it when the car in front of you drops water and you head into a wall at 80+ mph. This guy walked away with sore nuts and a bunch of bruises thanks to his cage, harnesses, and HANS:
http://vimeo.com/33128427

Was reading thru this thread when to my surprise I found my own video, and aftermath pic from Road Atlanta Dec11, some weeks before I joined Mye28. I recall the cracked rib more than sore nuts. But what American boy hasn't cracked a rib in pursuit of adventure?

I know that trailer...
Top

did that with my e30 at the last autocross, put 2+ seconds on him on a minute coarse that held no traction at all for me

Murfinator wrote: Dyno numbers don't mean shit when your E92 M3 gets passed by a 23 year-old 5 series at the motorsport park.

I'm seriously thinking about doing a track e28 build with the 3.5ltr turbo engine. I'm about 6mths away from having my twin screw s50B32 build in e36 m3 done but the motor will be to precious to track as it will cost about 15k to rebuild. An m30b35 costs about $1000 or less to replace.
Also IMO the e28 chassis is very underrated as a track car. Not as good as an e30 no doubt but the e30s in aust are getting over 10k to buy now.

I also have an m635csi but it's too precious to turn into a track car.
Top 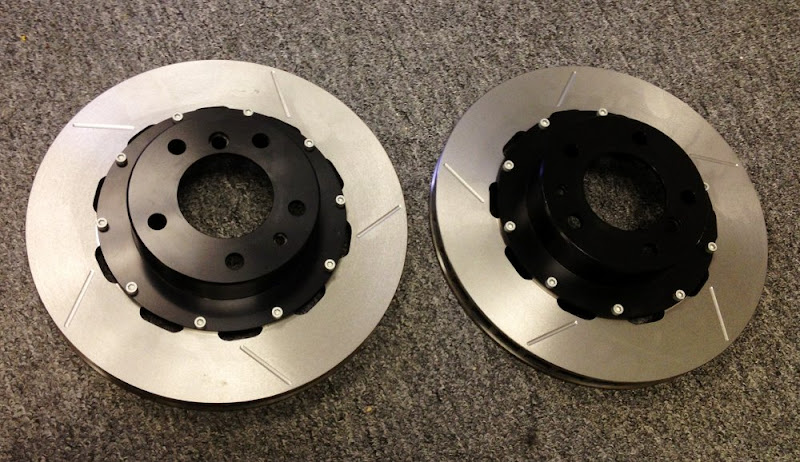 Details on the rest of the brake setup?
Top 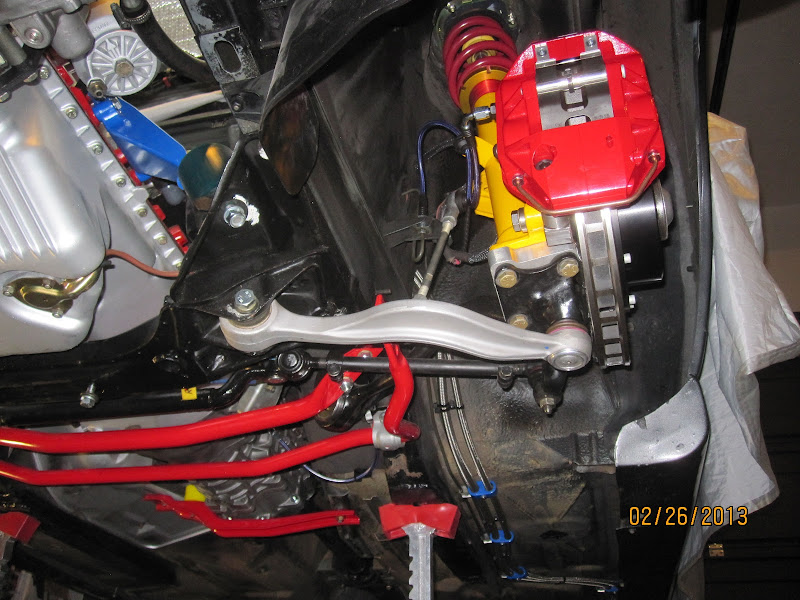 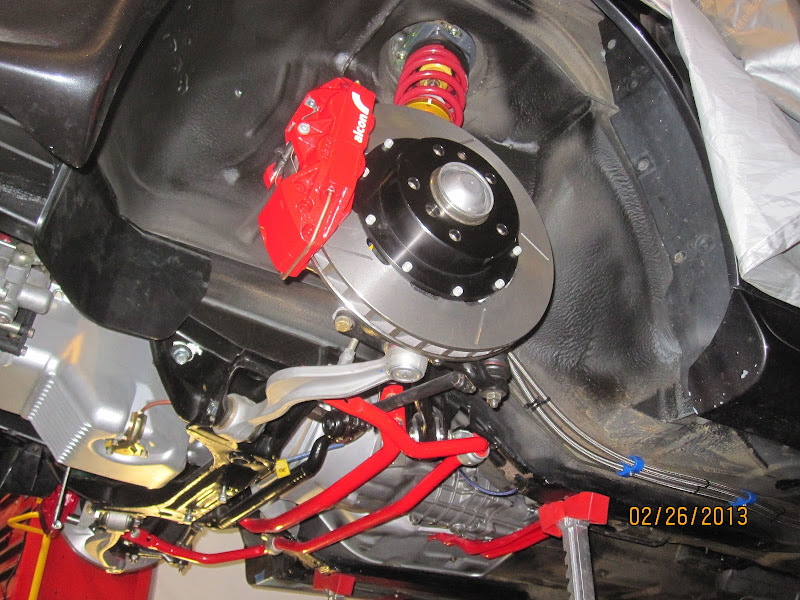 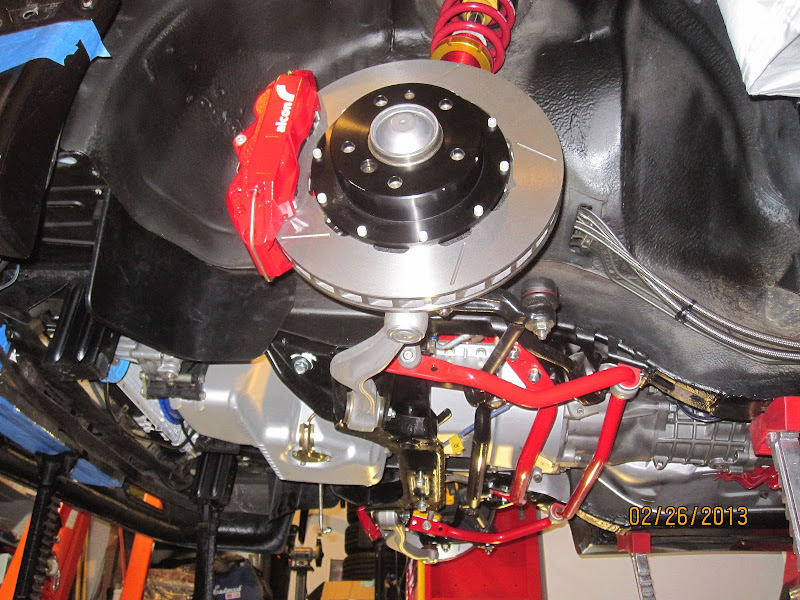 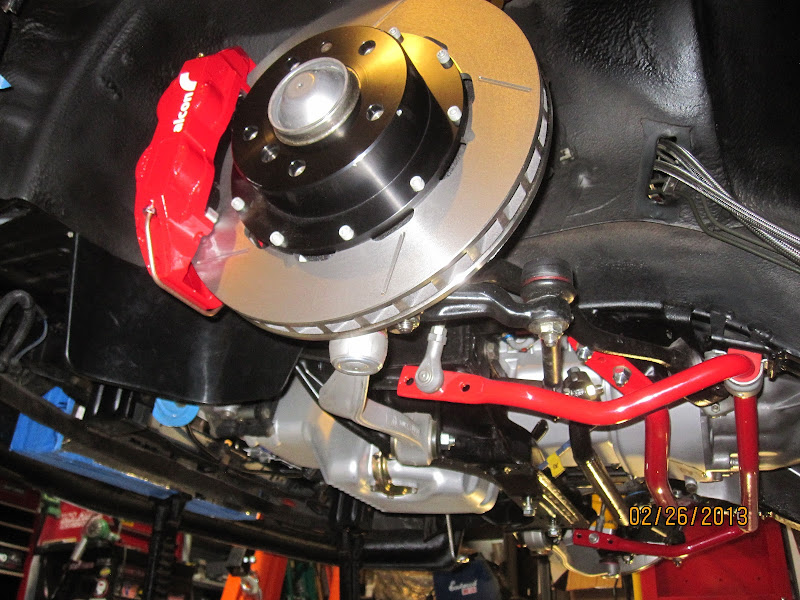 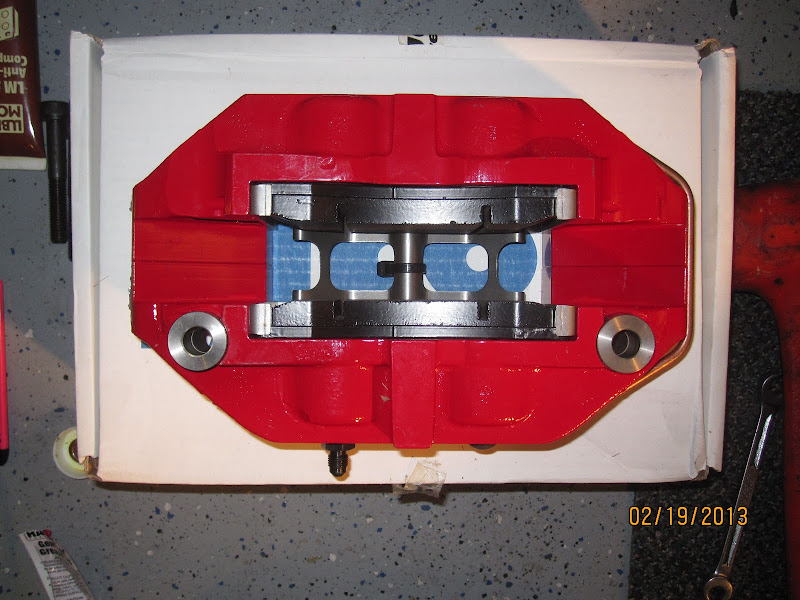 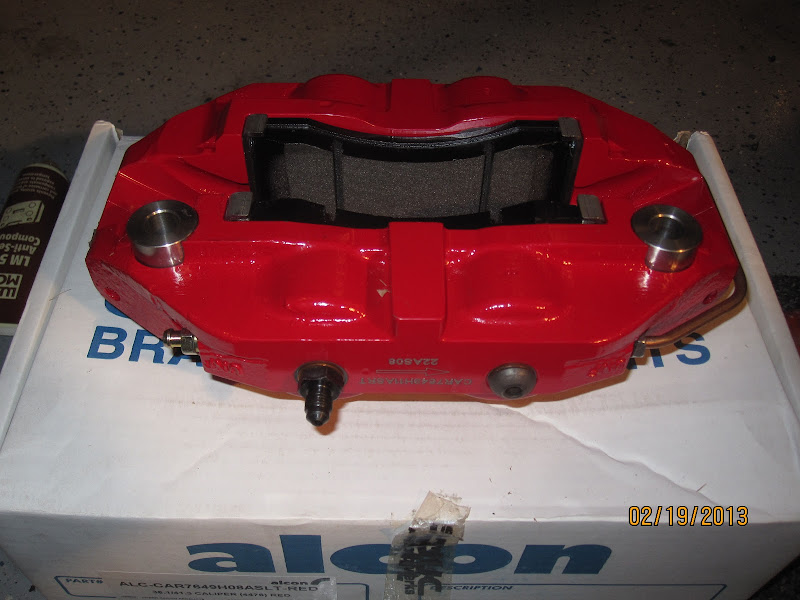 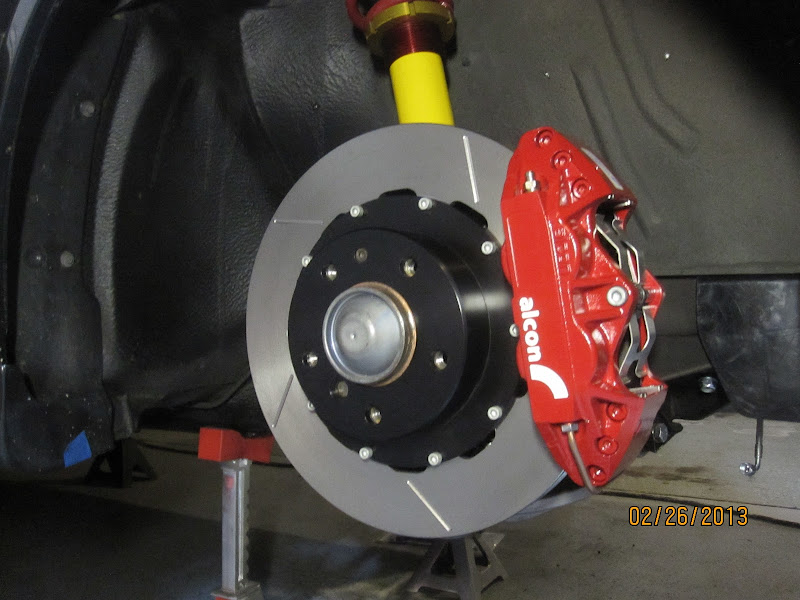 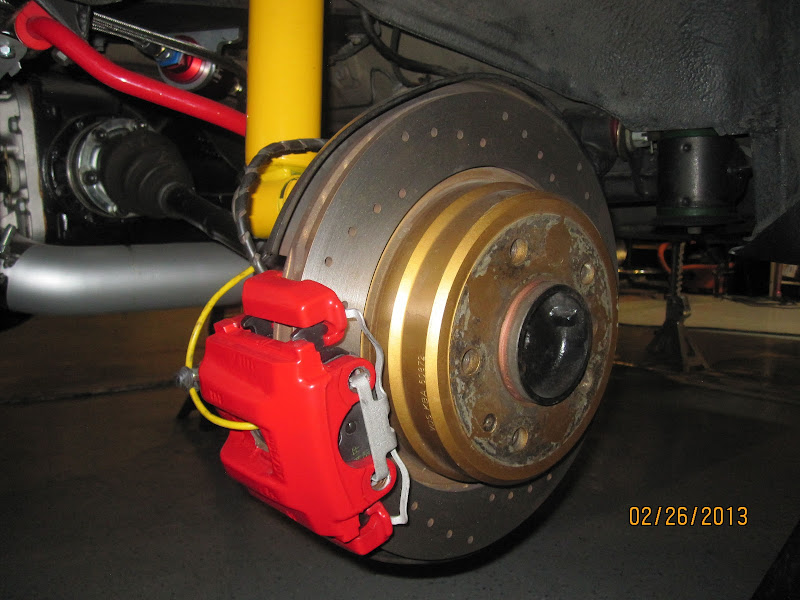 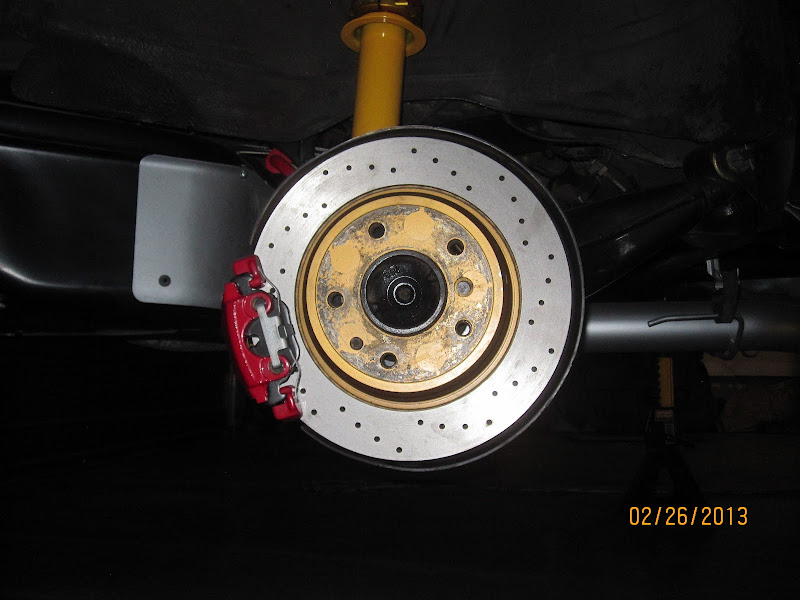 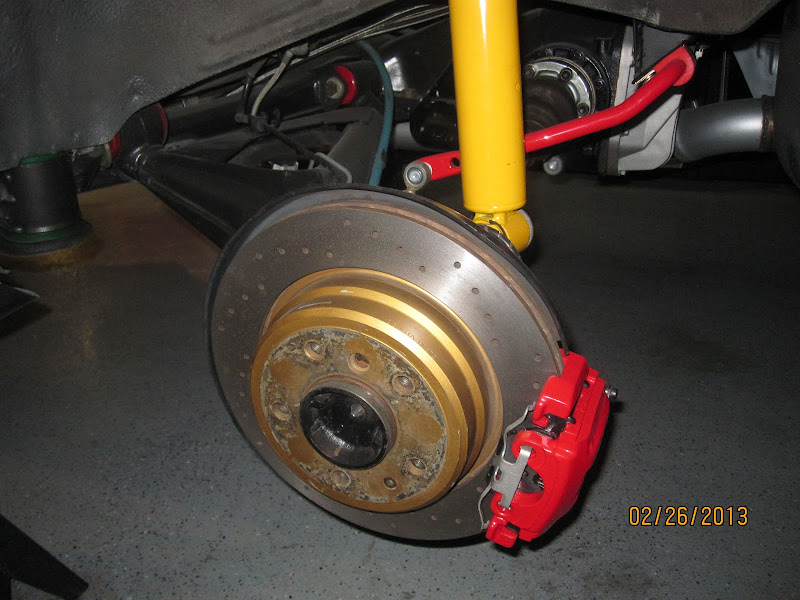 Can you comment on the weight savings per side of this setup (caliper & rotor) vs. the typical e32 brake upgrade? I've been contemplating a reduction in unsprung weight with a similar setup & it's advantages.
Top

Sweet Jesus... This is beautiful.
Top

I know that we don't always get a long here Murfinator but I will give you this,
when you do something, you jump in with both feet, don't you!!

Thank you all for the comments.

The exhaust manifold has been quite a challenge. Dozens of cut-off wheels and yards of 1 5/8 tubing later I finally produced a decent mock-up that fits with equal length primaries, each with its own sensor bung for more precise tuning. The final design in hand, the stainless version was produced. Below is a pic with the un-coated stainless manifold mocked up with the wastegates in place to confirm fitment. Once it's back from coating I'll get more pics posted. 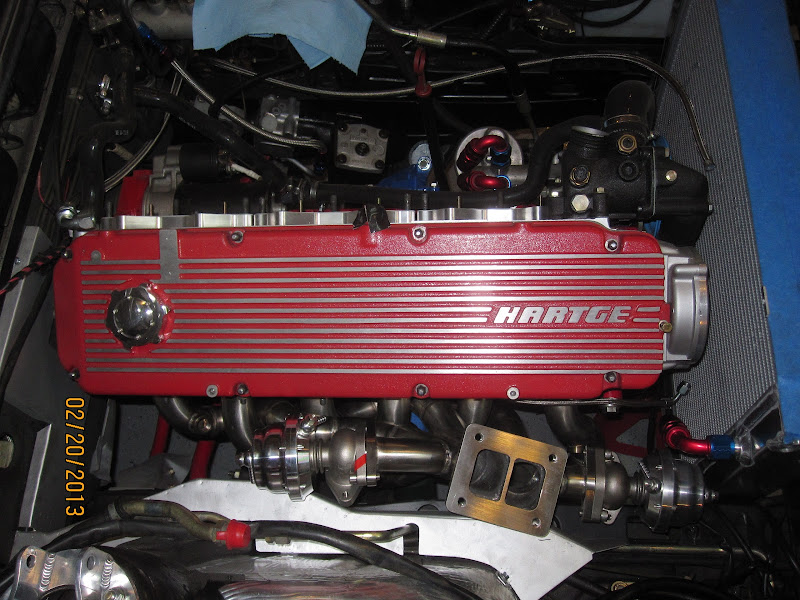 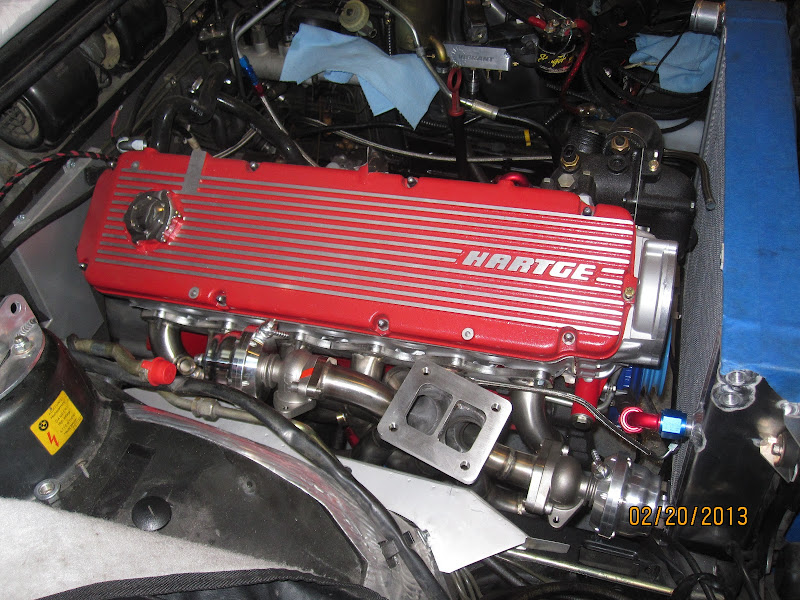