I found and read this, exchanged some thoughts with Philo and have the easy part done. Ready to fish the lower end of the cable down to accelerator pedal linkage.

So I go underdash to disconnect the j-hook and want to know if all of the pedal linkage has to be disconnected or if there's a way to remove/reinstall that mushroom tab on the j-hook to the linkage 'in place'. What say you?
Top

On my M30 I only disconnected the J hook without having to meddle with any other linkage. It was actually surprisingly easy to do. Getting the kickpanel down actually took longer. I'm interested to hear your experience though, I have a new cable on the bench for the S38 and will be doing it soon.
Top

Pedal linkage is all the same as a 535i. Undo the J hook and I typically use a plier to squeeze the locking tabs of the plastic clip that holds the cable to the firewall. Then I push as much through as possible into the engine bay. Installation is reverse of removal, one thing I will say it is makes it a lot easier if you connect to the pedal first. One other not make sure the locking tabs on the clip in the firewall are correctly seated.
Top

The part I found difficult, and stupidly difficult at that, is getting the rubber grommet into the bracket at the throttle end. Much K-Y, bloody fingers and many curse words later it was installed, but it sucked!

Be careful about deciding to just take the bracket off, the bolts tend to corrode to the manifold due to galvanic corrosion!

From the above, disconnect the old cable barrel clip and grommet at the bracket.

Once the underdash panel is removed inside the cabin, disconnect the accelerator pedal end of the M5 throttle cable by pushing the rubber grommet and J-hook through the linkage. No linkage removal is required, but I did disconnect the spring to facilitate the cable removal. My grommet was supple enough but a brittle dry grommet could tear and need to be replaced. Lube the old or new one if you bought it.

I could not squeeze the housing clip to push it back through the firewall,so drove it through with a long flat blade and a couple of whacks. From above then, once the housing is through, pull the housing and J-hook up providing enough flexibility/length to loop the cable under the brake bomb (toward the motor). Push the cable down toward the brake bomb bracket to provide enough slack and loop the cable under the bomb. Connect a fish wire to the barrel clip end (other end) and pull it under the bomb bracket and up the other side.

Connect the new cable "top" or barrel clip end to the fish wire and pull it back through the bomb bracket the same route. I lubed and removed the new grommet to make this easier. Lube and align the J-hook housing end of the cable with the firewall opening. The long side clip goes to the top (note the indentation on the top of the housing that makes tracking that side easier).

Awkward, but a right back hand will place it properly and securely.

Back in the cabin reinstall your lubricated J-hook grommet on the J-hook.

Push it through the accelerator pedal linkage. This photo also shows the long side of the housing clip in place on the top of the firewall opening.

Reinstall your spring. Go back under the hood topside and replace the lubed grommet on the barrel end of the new cable then weave the cable over the overflow hose through the bracket and into the throttle assembly. Insert the grommet in the bracket then push the cable adjustment housing into it. Snap the barrel clip over the cable and snap it into the throttle assembly. Secure the barrel in the clip. A block of wood is handy for clearance during all of this.

Once all is secure, adjust the cable to get your idle/throttle response set again. I spent a couple of hours doing this, you won't need that much time.
Top

Outstanding writeup and great pictures Matt - thanks very much!
Top

Can we make this a sticky ?
Top

I did this on the E34 over the weekend. really easy unless you find removing the master cylinder (trip to store for 11mm crow foot socket), removing the booster (yes, there really are 4 nuts holding it on and they are all buried in the pedal bracket), inserting the cable fitting into the firewall (time 2 sec), installing the a new master cylinder (another trip to WalMart for brake fluid @ 10 PM) and bleeding the system to be a little annoying.
Top

Thanks for the write up. I was a little confused about the fish wire part but once I started it was pretty obvious.
I think my cable was original because of it's condition and I'm sooo glad I did this before Monterey.
Top

There's a $28 sollution vs the oem rubber bushings on the throttle and cruise control cables. Aluminum bushings are available from tem@meurosport.com. I used these previously on my 96 740il and the results were excellent. After looking at deteriorated rubber bushings on my M5 it seemed like they would work there as well. I ordered another set cut off the rubber bushing and the plastic nut on each cable. I threaded the aluminum bushing on the cable placed it on the bracket and installed the snap ring on the other side. Its much easier to adjust the cables and the throttle feels great. Go to the website and view the two applications.
John
Top

I found that a pair of smallish long-nosed Vise-Grips were very effective at getting the clip out of the firewall from the passenger compartment side. Likewise for making sure the new cable is well seated.
Top

Well it took a year and a half longer than I thought it would but I finally got around to replacing the accelerator cable last night. I don't want to denigrate mab1957's excellent write-up, but I couldn't understand the fish tape setup, which way things were supposed to be pulled, etc. So here's what I did with the tools in the toolkit, it literally took less than 15 minutes. My kickpanel was already off however so I left that out of this process. Most of it is self explanatory to anyone familiar with the components involved but I included two photos to help clarify my descriptions.

1. Disconnect the spring from the pedal side of the linkage
2. Use the large flat tip screw driver from tool kit to pry the J-hook out of the other side of the linkage (save the rubber bushing).
3. Use the water pump pliers from tool kit to squeeze the firewall "grommet" and push the cable back through into the engine bay.
4. Use a 13mm wrench to remove the two bolts holding the brake valve/bomb assembly, gently move the assembly towards the motor and replace one of the bolts to hold it out of the way (figure 1).
5. Disconnect the speedo and cruise cables from the throttle plate actuator, identify the speedo cable (it's closest to the radiator) and remove the plastic clip from the cable end.
6. Undo the two 10mm nuts holding the mounting plate to the 5 and 6 throttle bodies, and back the barrel out of the rubber bushing with a 13mm, holding the receiver with a 17mm. (figure 2)
7. Put some dish soap on the tip of the plastic receiver and use the same water pump pliers to pull it out of the rubber bushing.
8. Cut the rubber bushing into two halves with a razor to remove it from the mounting plate.
9. Holding the throttle end, carefully snake the old cable past the brake valve and into the engine bay to fully remove it.
10. Feed the new cable behind the brake valve bracket (it barely fits) towards the firewall. It will line up with the hole in the firewall pretty much on its own. A little wiggling will get it right in there. Don't snap it into place yet.
11. Soap up the new rubber bushing and press it into the mounting plate, lightly soap the plastic receiver and press it into the rubber bushing, thread the barrel into the receiver.
12. Reach behind the brake valve and snap the grommet into the firewall.
13. Install the rubber bushing back into the pedal linkage and use the water pump pliers to insert the J-hook. I used some soap. Stretch the spring back onto the pedal side of the linkage.
14. Back in the engine bay, put the mounting plate back onto the throttle bodies and reconnect the linkages.
15. Reconnect brake valve and adjust cables as necessary. 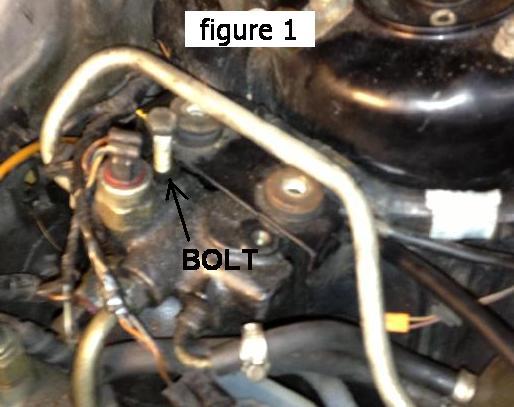 Thanks for the pics and info guys.
Top

ahab wrote: 4. Use a 13mm wrench to remove the two bolts holding the brake valve/bomb assembly, gently move the assembly towards the motor and replace one of the bolts to hold it out of the way.

Thanks Ahab, this move helped me push the cable behind the bomb and right in the slot on the firewall. Watch out not to let the metal spacers on top of the brake bomb slide out and drop behind the bomb when you push it toward the engine. They might be hard to retrieve if they do. I almost lost mine down there.

Just completed this procedure last weekend using the steps from this thread (M5, 133k). This thread contains 2 sets of procedures; I printed both and ended up using a hybrid of the two.

I thought removing the J hook would be tough - nope, slid right out because the bushing was lubed.

I thought removing the bracket through the firewall wouldnt be too tough - nope, total PITA. Because my cable snapped and was being thrown out, I just said "screw it" and tried to break it apart with pliers. That sucker is tough and it didnt break. Ended up pushing it through with a long screwdriver + hammer. No damage to firewall.

I thought adjusting for idle might take a little while - nope, perhaps I got lucky, but first attempt was on point.

Overall, I never needed wood, and didnt use soap.

As an aside, while Ive owned other BMWs, I never owned an e28 M5 new, so I did not know exactly how the pedal should feel. Mine was always seemed a bit heavy. And then the cable snapped. Turns out, it was due to the routing of the throttle cable - suppose someone replaced it earlier and did a poor job (that just leaves me with more questions). Now the pedal feels much freer and unrestricted - still getting used to it.
Top

I just replaced mine a few days ago. After much cursing and trying many things, I couldn't get the old cable to unclamp from the firewall. So, from the engine bay, I yanked the crap out of it until the clamp tabs broke (after unhooking the j hook btw). It was much quicker that way.

Also didn't bother trying to replace that grommet that's on that little bracket. My old one looked good so I just left it there.
Top
Post Reply
18 posts • Page 1 of 1