So after recently acquiring a 1988 BMW M5 from a local San Diego seller, the first project I did on it was paint correction and protection - to remove all swirl marks and major paint defects. The car's paint and body panel condition was already pretty good - no accidents and all VIN tags intact. Here's my first post on the car purchase: https://www.mye28.com/viewtopic.php?f=5&t=157648

After washing the car, I clay bar'ed the paint to clean it up from contaminants before the paint correction phase. I used my Rupes LHR15 buffer (in my opinion, the best buffer I own) with a 5" disc and Meguiar's microfiber cutting pads for the compounding phase (Meguiar's DMC5) and Meguiar's microfiber DMF5 polishing pads for the finer polish phase. I used Meguiar's 105 for the compound and then Meguiar's 205 for the finer polish phase. I ended up switching to the Rupes compound and polish equivalents because the Meguiar's, although much cheaper than Rupes compounds and polishes, weren't performing as well on this single stage paint. The Rupes compounds and polishes are far superior and I typically save those for high end cars that I do for friends.

What really took me by surprise was how difficult it is to remove compound from the M5's single stage black paint. It's incredibly labor intensive. I used to own an auto detailing business from age 16-21 and I mainly dealt with paint that had a base coat and clear coat - far easier to work with than single stage. I ended up having to use a 50/50 isopropyl alcohol/water solution to get the paint clean of the compound and paint cutting residue along with going through a ton of microfiber towels. You'll immediately see your white cutting pads choke up with black paint residue and you'll have to blow out the residue with compressed air, which I had to do after just a small 2 square foot patch of compounding. If you don't keep your pads clean of residue, their ability to cut and polish will become nearly nonexistent. In my years of experience in correcting clear coat paint, you only need to blow out your buffing pads about 6 times per cutting phase. In a single stage car like the M5, you have to blow them out after one small section of cutting. I ended up changing the pads 4 times per stage. I went through 8 pads!

I also dyed much of the rubber with black rubber dye. Since the side door molding rubber is a bit old and porous, I have to go over it 2 or 3 more times, but it still turned out great!

One thing to note is that most E28 M5s have cracked paint on the hood due to years of heat. These are commonly called "crows feet" and primarily affect cars with single stage paint. This cannot be removed. I thought about trying to wetsand them out, then compound and polish, but I don't want to remove any more paint layer than I should. I'm going to leave it as is as I think the patina is kinda cool.

PS, I already ordered Euro headlights and bumpers, which is why I decided to not dye the front grill with the black rubber dye. 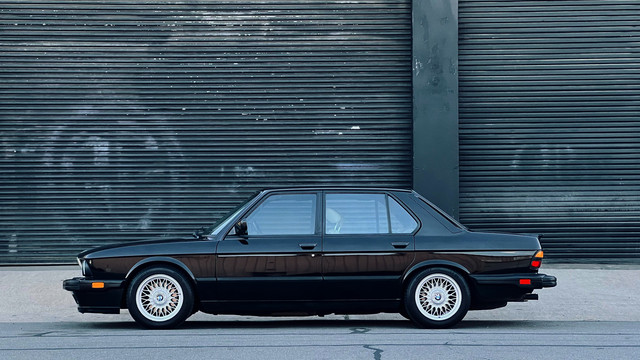 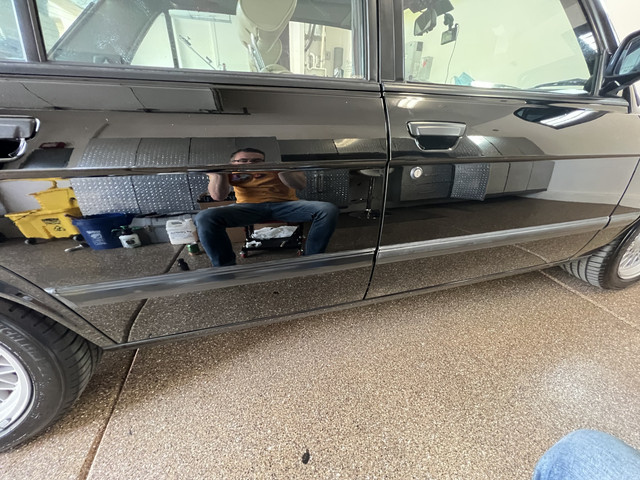 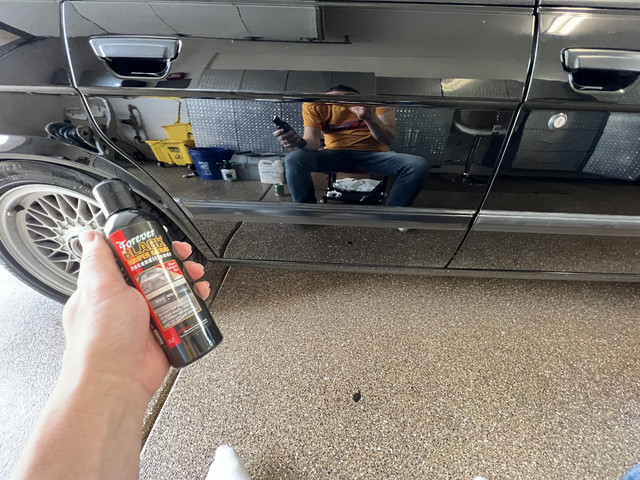 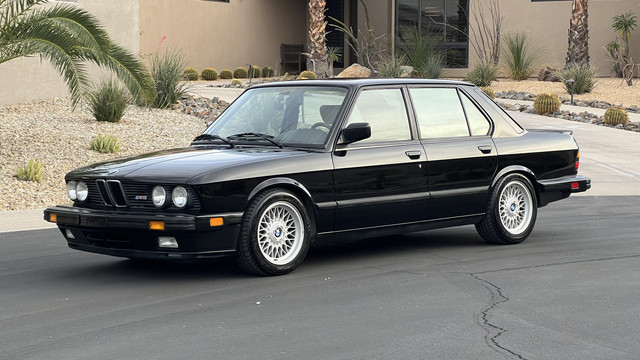 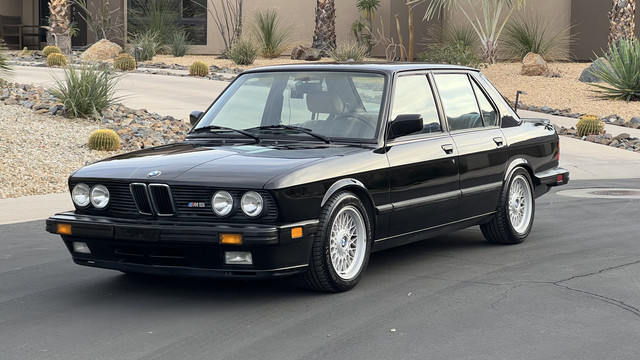 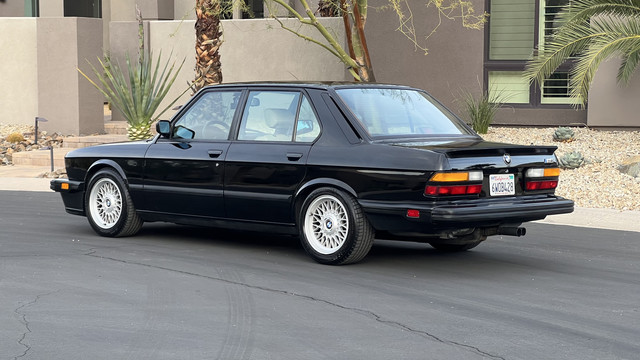 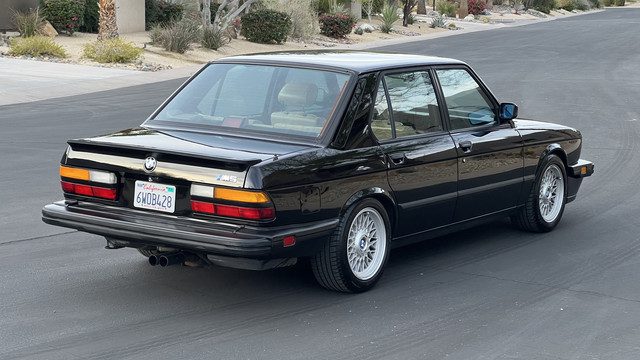 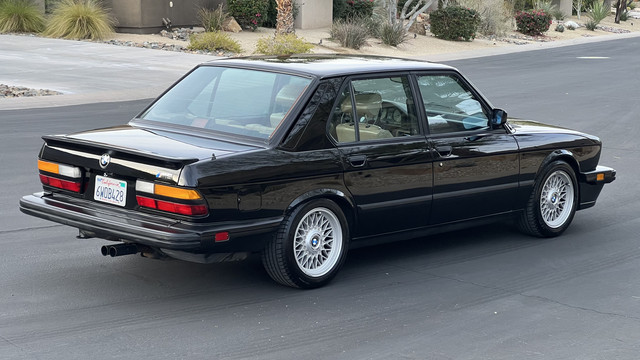 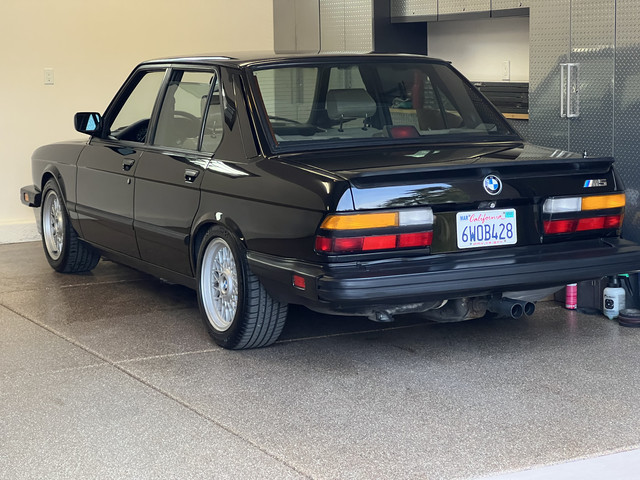 OK 524, my car is in Santa Fe, NM, when are you coming to give mine the exact treatment? Excellent work and write-up.

I have been reading about Jescar products on a few car care forums. I may have to deliver my M535i to you. Soon. (SD is a relatively short trip from LA, there are people for me to see down there...)
Top

I have been reading about Jescar products on a few car care forums. I may have to deliver my M535i to you. Soon. (SD is a relatively short trip from LA, there are people for me to see down there...)

I used Klasse on my single stage Schwartz '88 535i in the past. I loved their All-in-One and got great results.
I've been using Menzerna Micro Polish 85RD for a while on my Artktisblau Metallic (2 stage) and while good for final stage or light once-over for swirls and micro stuff (e.g. cover covers, spray & wipes, etc.), sometimes I need something slightly more aggressive (the 85RD is on the least aggressive side of the cut scale). I did try Meguairs Correction Compound D300 but didn't see a whole lot of results (but maybe that was me).
I have also used a hand glaze at the same time (P21S Paintwork Cleanser) for some troublesome spots. I do have a few spots that need some remedial and concentrated attention and are, admittedly, beyond my skill level (nothing that a professional can't handle, though).

I too am old school and just cover it all with a solid coat of Carnauba (usually P21S Concours but I did switch up to their 100% Carnauba). And then a covering of detail spray wax (I just starting using Poorboys World QD+ Quick Detailer Plus and LOVE the results I got).

I haven't got on the whole ceramic coating bandwagon yet despite everyone telling me to do so for years now.
Top

goddamn, that's a sharp looking car. well done. the US spec M5 always looked so great, just the way they were, right out of the catalogue. thanks for sharing.
Top

Great pics and love the write up. Ours has some paint edge burn through from previous owner details. We also have the crows feet on the hood. Was your hood insulation removed?

I’ve been using ceramic/si products on my other cars for years. You can’t beat the ease of use and durability but there is something about the look and feel of carnuba on single stage.
Top

Fanclutchnut wrote: ↑Jan 17, 2022 7:55 AM Great pics and love the write up. Ours has some paint edge burn through from previous owner details. We also have the crows feet on the hood. Was your hood insulation removed?

I’ve been using ceramic/si products on my other cars for years. You can’t beat the ease of use and durability but there is something about the look and feel of carnuba on single stage.

Thanks! Mine has some paint edge burn too from a previous detailer - on the roof gutter corner and a tiny spot on the spoiler corner.

My hood insulation is still intact. I have some crows feet on trunk too, but not as bad as the hood. For some reason there's none on the roof.
Top

That looks amazing. I need to do that on my M5. Are you going to do a how to clinic?

Beautifully done. Love the stock look … all the way to the tail pipes!
Top

Thanks! I could do a how to guide in the future, but to be honest there are some great YouTube videos that could probably do better.

Thanks! It's getting Euro bumpers and a Billy Boat exhaust. It'll be "mostly" stock.
Top
Post Reply
13 posts • Page 1 of 1