Finally got the Cylinder Head back a few weeks ago. Now to find the time to assemble it all! 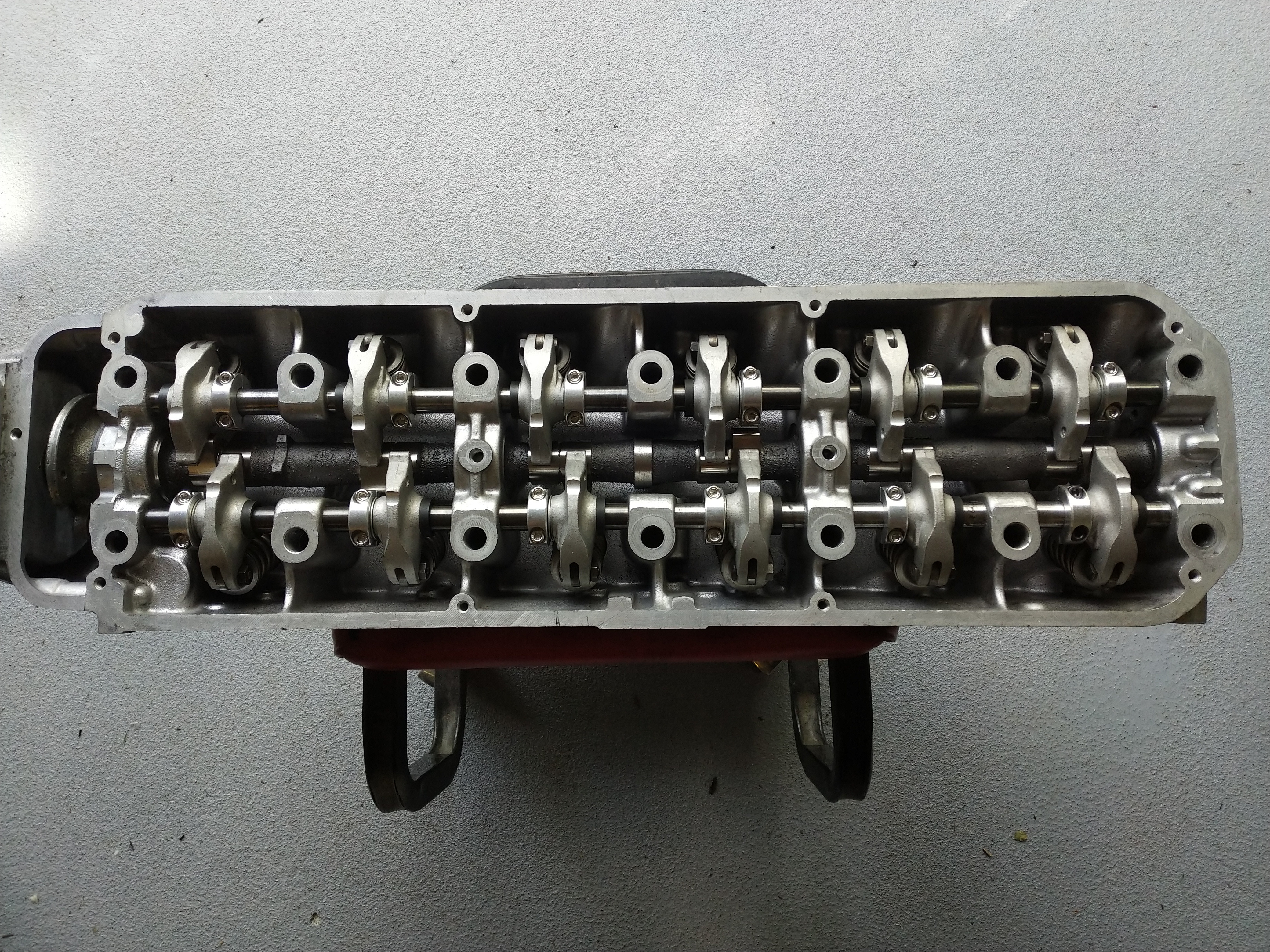 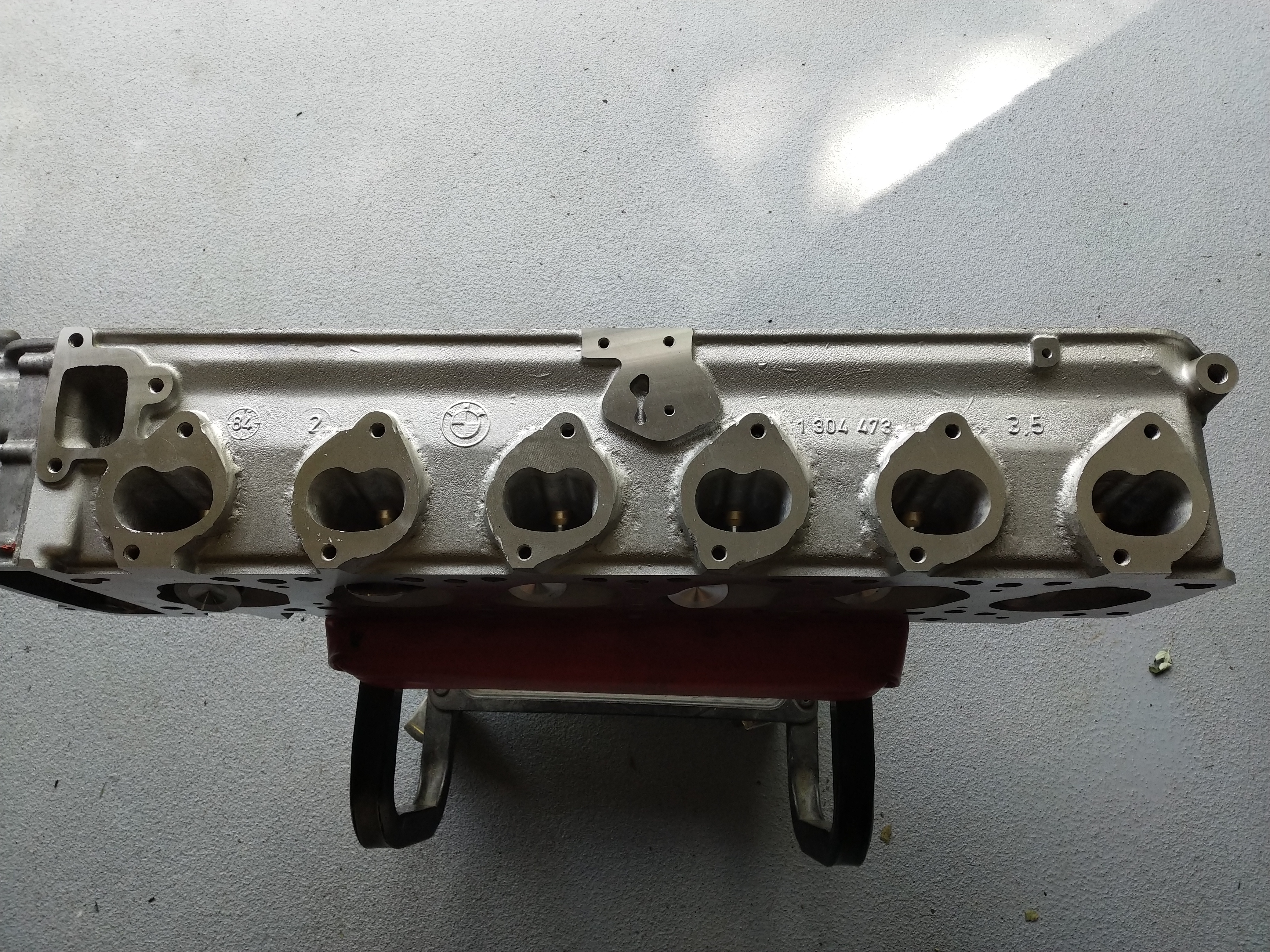 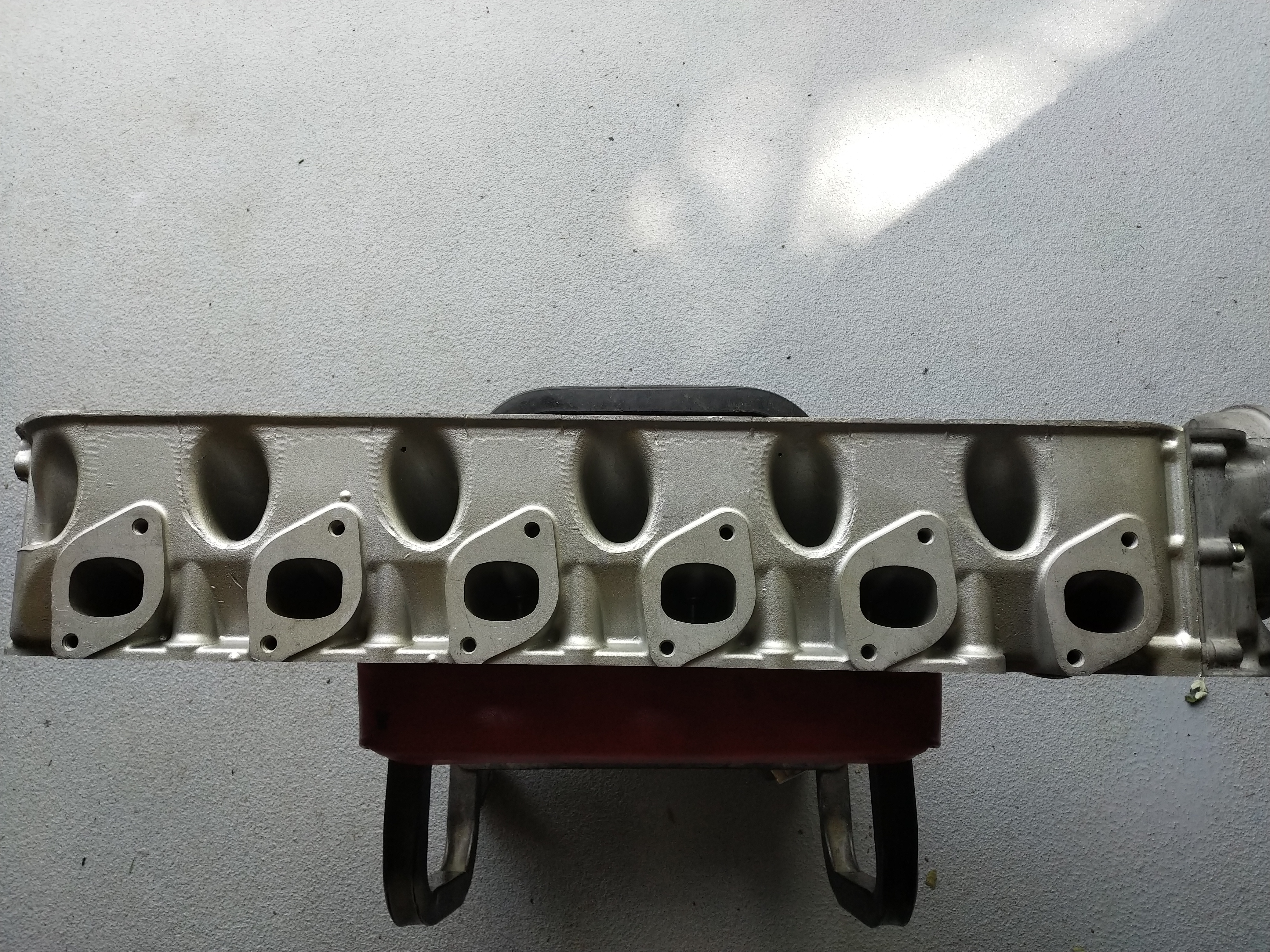 Looks great. But is that corrosion on your mating face? Glad it isn't going to be boosted...

Should be a sweet build! I'd think you could make similar power to an S50 or S52 depending on how well the head and cam allow the engine to breathe. Depending on your final compression, you should be able to make more power than B35 and have over 220hp. The real nice part is that you will probably have more torque at ~3000rpm.

I'll throw this tidbit out there, I finally drove my euro '81 635 (M90) with the Motronic intake manifold (B32/B34) and noticed that it doesn't have the same top end as the individual runners of my Ljet car. It seems to me the Motronic intake is biased towards low end torque and not top end power. Supposedly these two should have the same cam, although with different distributor drives.

I guess it could be the difference of the ECU timing vs distributor advance curve, but it felt to me more like soemthing with the two intake manifolds-- power drop off felt like My US spec M30B34's. 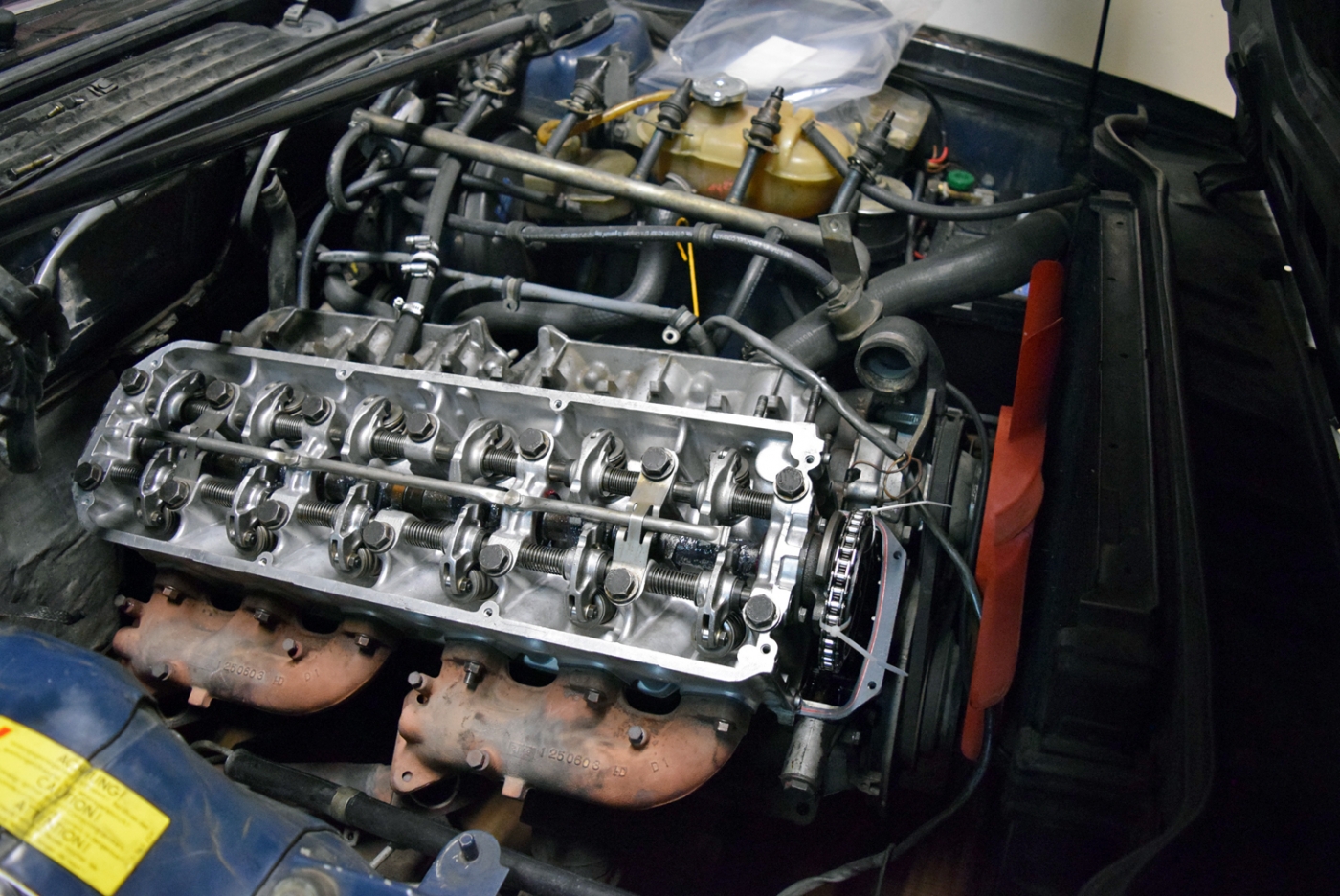 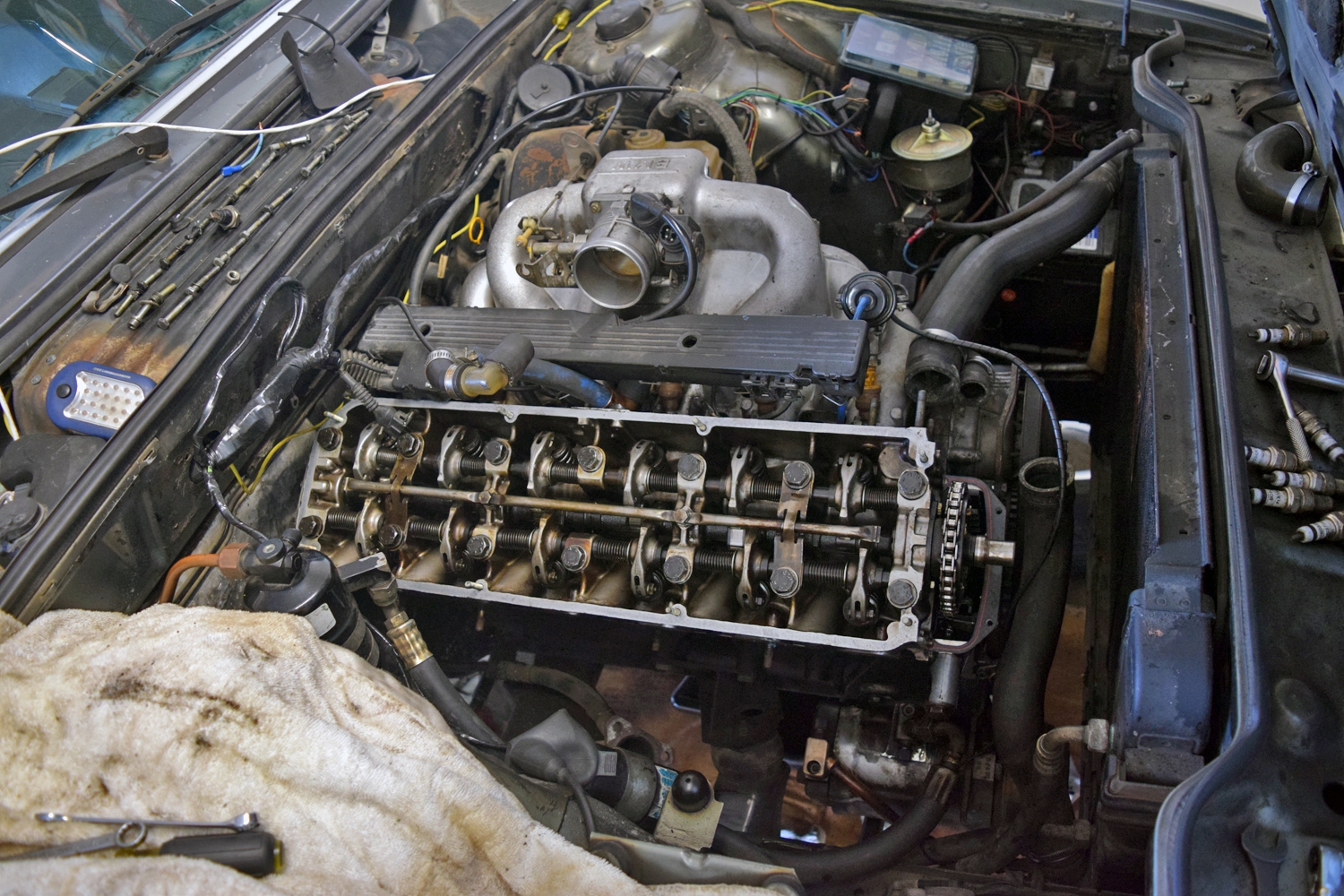 I got the engine assembled and installed in the race car, and raced it this past weekend. HOLY crap what a difference! I cannot wait to be able to get this car on the dyno and see what it makes. 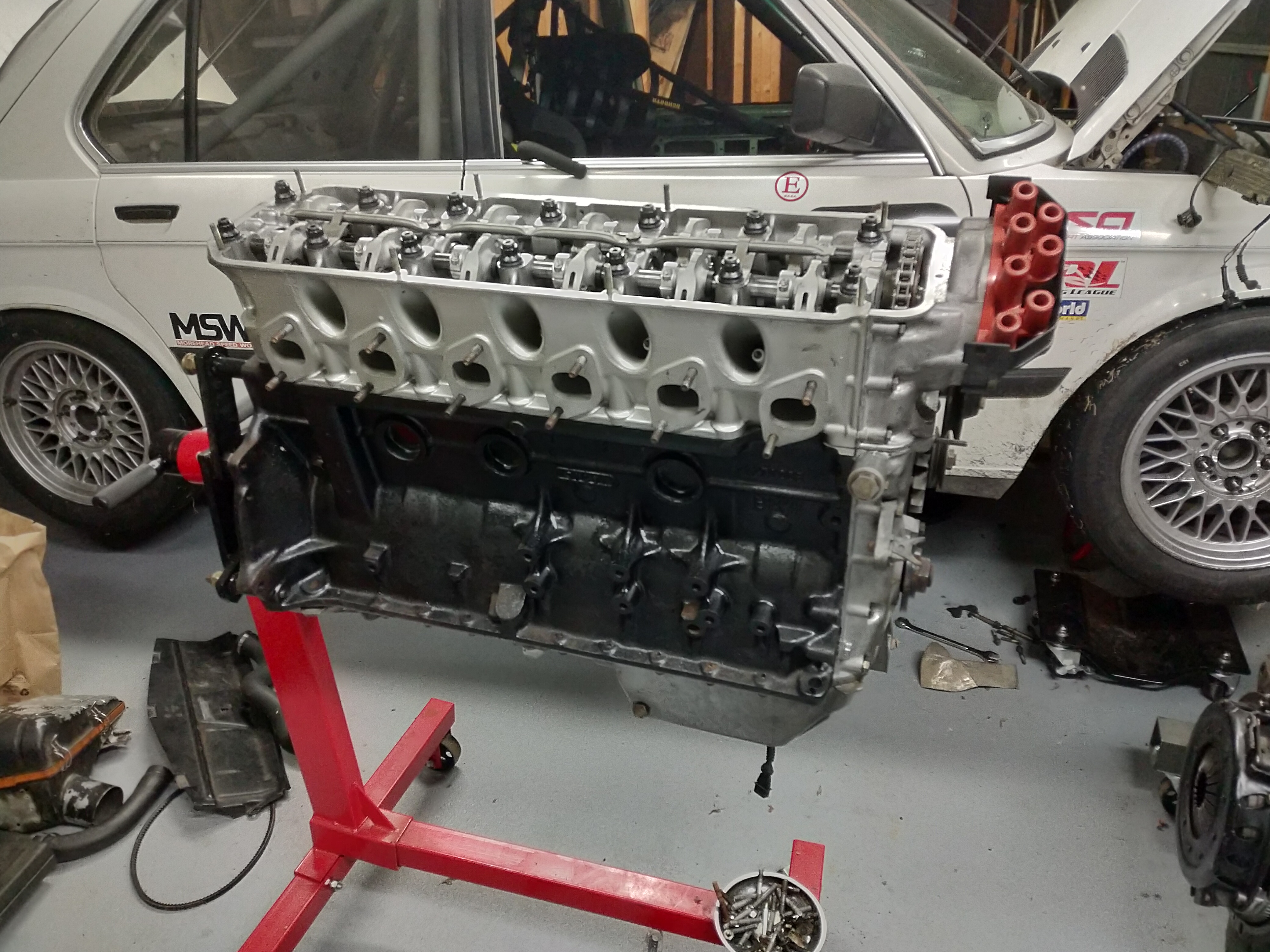 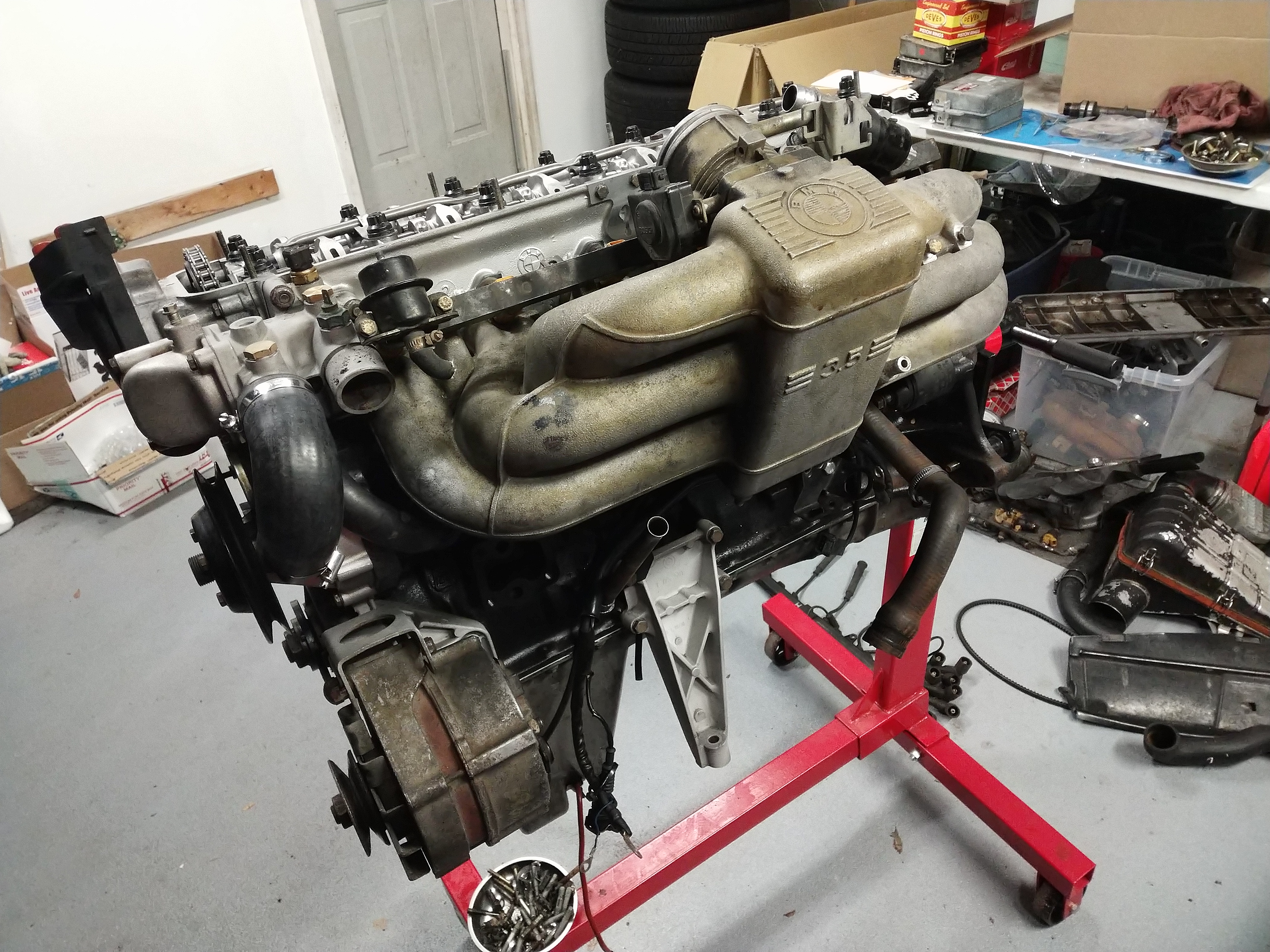 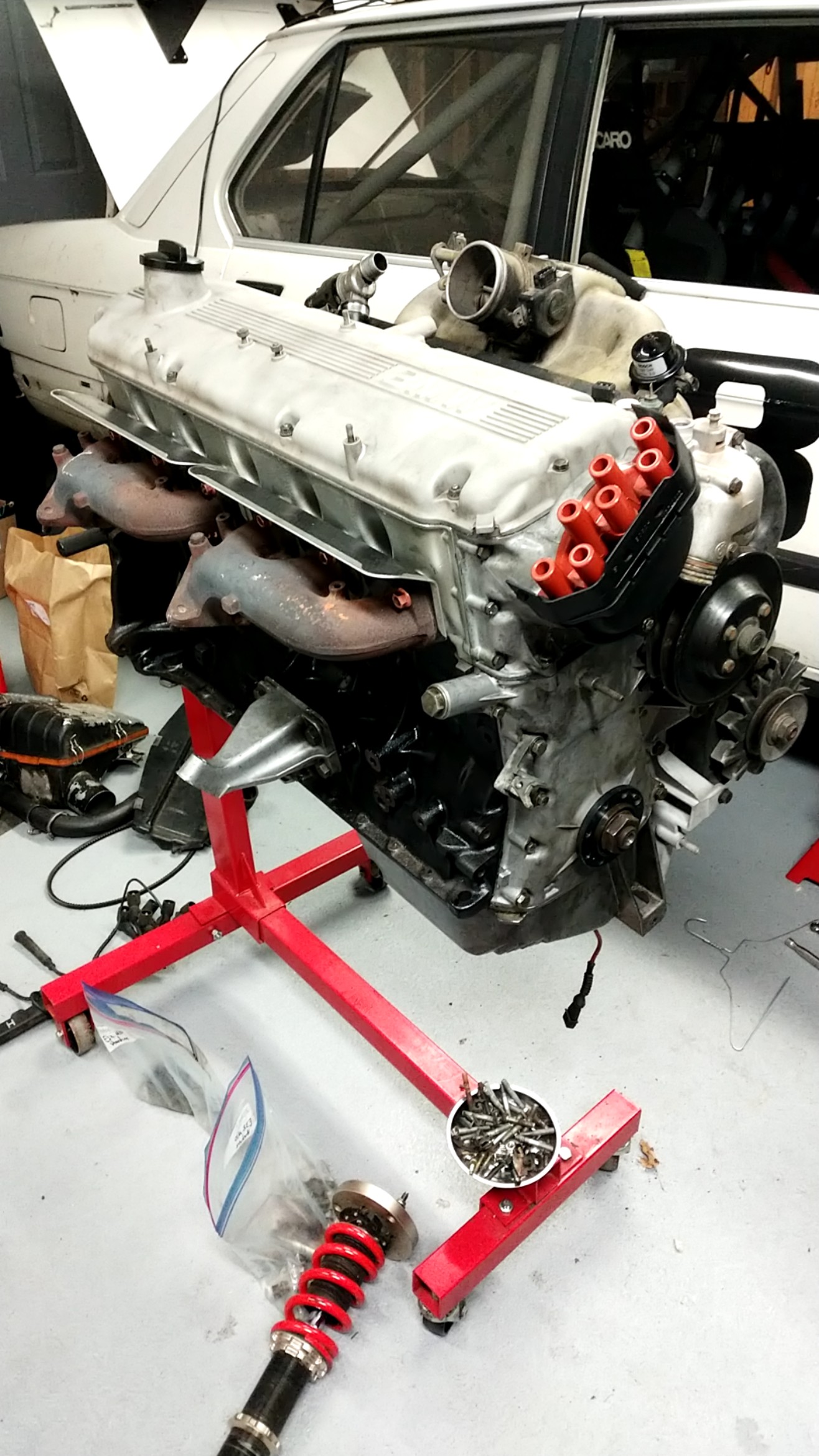 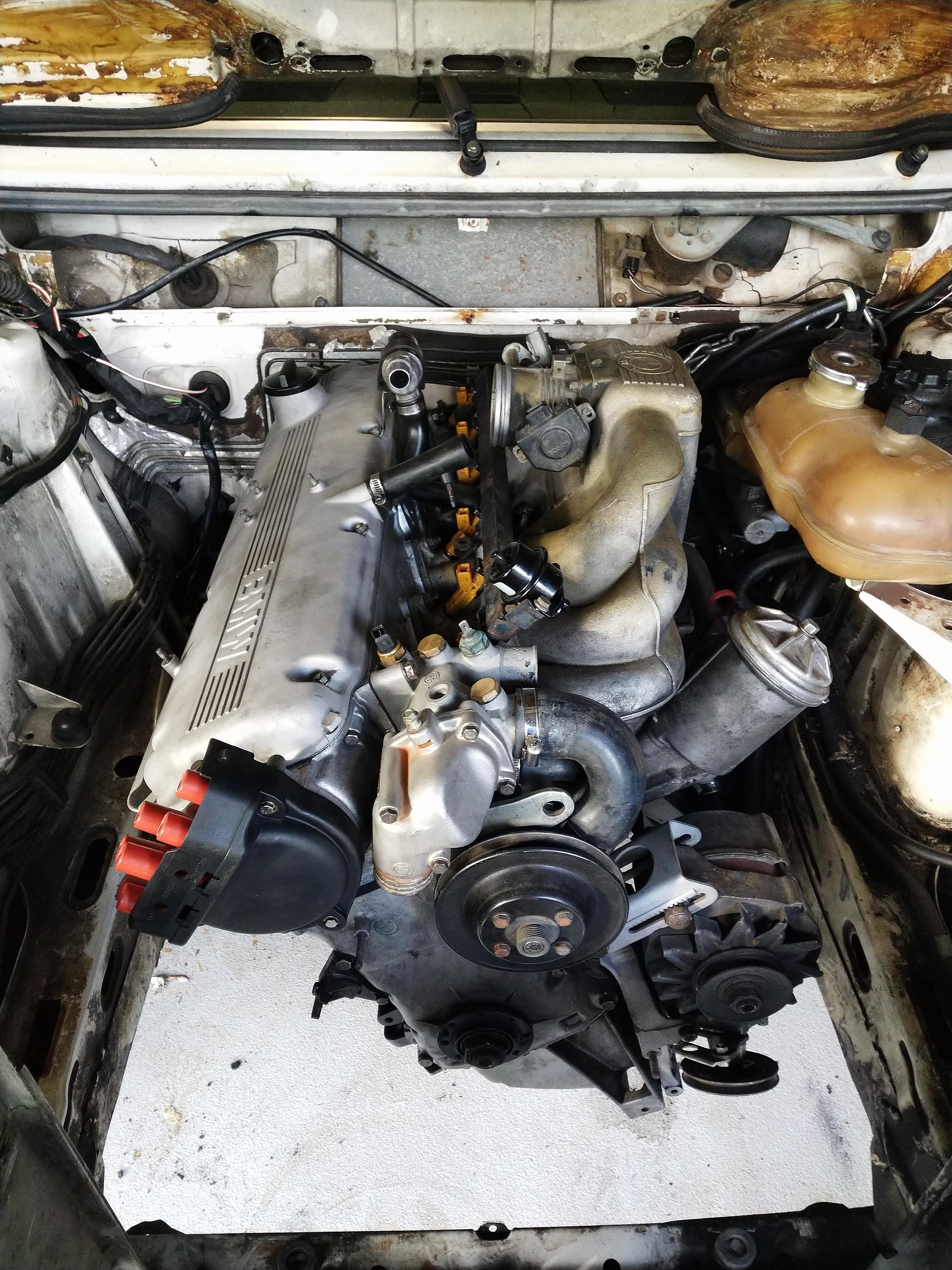 During the off-season, I will be taking the Oil Restrictors out of the Engine Block, as I feel they are actually under oiling the Cylinder Head at idle and lower RPM. The Valvetrain is VERY noisy, despite having done valve adjustments several times to verify and confirm that tolerances are correctly set.

I am also still having Oil starvation issues in long left hand corners, even though I am using a deeper B35 Oil Pump and Pan. I also overfilled the sump by a little over a liter, and it made no difference. I am not convinced some of the Crank Scrapers that are available will fix this issue, so it looks like I will have to have a custom Oil Pan Baffle fabricated.

During the race on Sunday, the car overheated. After getting back to the paddock, I found the Water Pump Belt had managed to flip itself over 180 degrees. After further inspection, I found the Alternator seems to be out of Alignment. It is not loose though, so I'm not sure exactly why that is yet. I'll do some digging and figure that out. It's a later Alternator, so no Bushings involved.
Top

Before you take the restrictors out, put the right oil filter head/housing on. That's part of your problem right there. That B35 housing won't work correctly on an early block. They only work on later blocks with the bifurcated casting that has the drain to the sump, not the closed casting.
Top

I understand and am aware of that, but I do have the Miller Adapter installed, that is made for that exact issue.

Regardless, consider putting the correct oil head on and see if it helps with your issue at all, just to rule out the possibility. It's a lot easier than pulling the head.
Top

BuzzBomb wrote:Regardless, consider putting the correct oil head on and see if it helps with your issue at all, just to rule out the possibility. It's a lot easier than pulling the head.

It won't, as I have previously had this same issue with the B34 Filter Housing installed on the engine.

What did you end up doing for your oil starvation issues on the car? Did you pull the restrictors for the oil to the head? Add in an accusump?

Just hoping for an update as there is a lot of good information in the thread. Thanks
Top

I swapped an M54 into the car. Ultimately, there is no fix for the oil starvation issues except for having a custom Oil Pan Baffle or Oil Pan made, or using the VAC Dry Sump setup. There are just so few people racing these engines and trying to pull 1.0-1.5 lateral Gs, that there is next to zero aftermarket support for M30 based engines. I went through 4 engines in 4 weekends, spinning rod bearings in each one, even with tiny oil restrictors in the block to try to keep oil in the pan. An Accusump might remedy the issues, but at the cost of added complexity. I plan on eventually endurance racing this car, so that is an added failure point I was not willing to risk introducing to the car.
Top

I realize that he quit on the M90 engine but just want to ad for those guys building B35 heads to be careful about the valves.

I bought the valves (SS) and double springs from Ireland Eng.
I had the valves running in the head for about 8000 miles.
Had a timing chain on an M30 motor break because the BMW replacement guide was not made correctly by BMW. I think this is pretty well known.
I had 3 bent valves and one broken rocker arm.
When head went to machine shop they discovered the collet area where the locks go was mushrooming.
I had the valves tested and found out the metal in the stainless steel valves was too soft probably not hardened properly.
They were Ireland 1mm larger valves that they sell.
Because of the time that had that passed, (4 years) no warranty help.
The next day after talking to Ireland they pulled those valves from their site. I don't see them offered 3/14/21.
If you have them just beware they could fail and fall into the piston.

Because these were the 1mm bigger and to save the head and be able to use it, I had custom valves made by Ferrea Valves in FL. $700.00
This motor is in my 72 3.0 CS that I just spent 4 years rebuilding from the ground up.
Top

Not what I wanted to read but not unexpected either.

For the M54 are you just using the E34 M50 oil pan with a modified oil pickup? When I've considered that swap in the past I was always concerned that I'd run into similar problems using that pan.

Lastly, what tires are you running and what size? I've been running 225/50R16 Hankook RS-4 on tack without issue but looking to go up a step or two at some point, obviously I need to take care of the oil issues first though.
Top

Thanks for following up, did you run anything in between the RS-4's and the Hoosiers succesfully? That's a big jump up in tire!

Edit: While I've got you, what sort of spring rates are you running to support the Hoosiers? Sway bars? Are you running the AKG bump steer spacers (for roll center correction)? 17 x 8 or 17 x 9?

Obviously the tracks you run at have a big impact on this as well, there's probably a left hand corner somewhere that you could run into problems with even on the Hankooks.

The M54 is very tempting, just for the sake of opening up a lot more engine/trans replacement options when things go wrong. Those cars are all failing up here due to age/mileage/rust so our yards are just crawling with them. M30's not so much.

I think my spring rates are 700F/650R, but it's been so long since I've messed with them that I can't remember. I have adjustable ST Sway Bars in Front and Rear. I have the AKG spacers, but I have yet to run them. Wheels are 17x9 ET30. I have to run 25mm spacers up front to be able to clear the front springs. I'm running 5mm spacers in the rear.
Top
Post Reply
65 posts