Just like everyone else who's done this, I had to discover by myself that it's a REALLY tight fit and wrapping the pump with rubber just won't work. I'm not even sure why people try; I guessed the idea was to make the pump quieter.

Any-who, I slimmed it all up by using a single tie and one piece of rubber jammed in between the pump and the return tube to make it more straight and the metal zip tie even tighter. 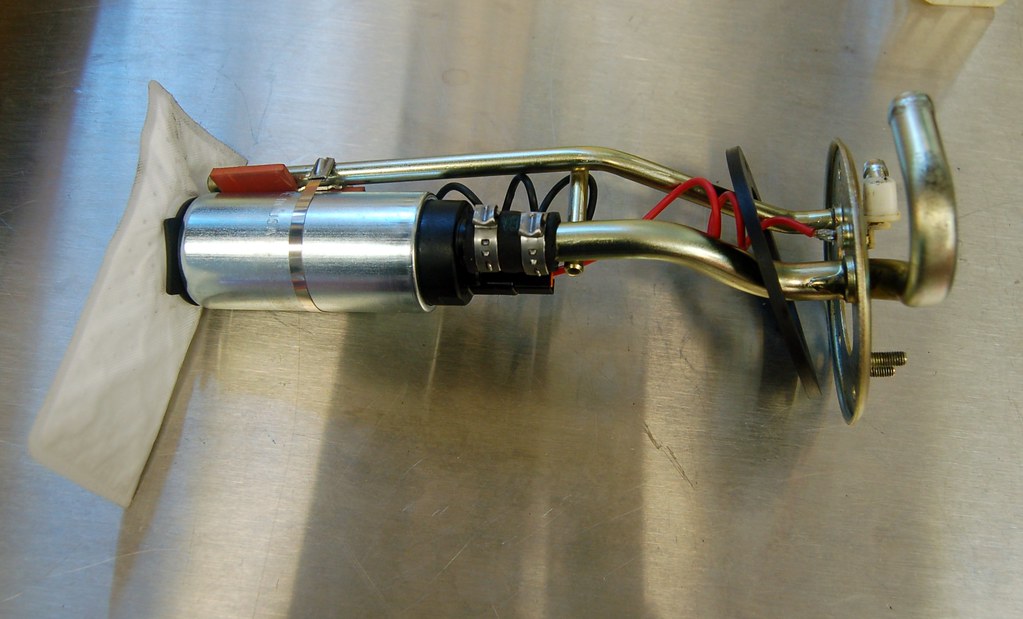 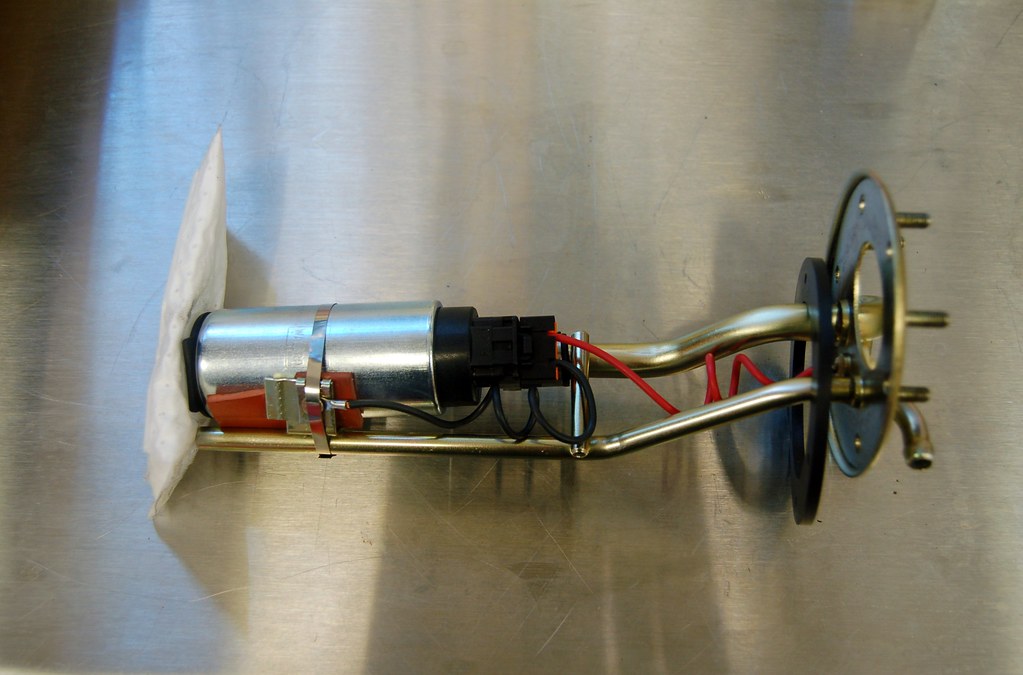 Just got back from a test drive and it appears to be working great. I think my adjustable FPR dial shows a much more stable pressure when I blip the throttle.

Hope my trials & tribulations with this help others. If it falls apart or something you know I'll add to this thread...

I like those ties. I need to get some. Is the nylon coupling you got rated for fuel? I used brass NPT fittings on the B7. Had to use the 5/16 harb to NPT, a coupler and an NPT to 3/8 barb. That was after discovering that having a Menards nearby would have been more useful than three different specialty hose and fitting stores.
Top

wkohler wrote:I like those ties. I need to get some.

Note they are hard to get tight. I had to get them as tight as I could by pulling with pliers and then use the rubber to expand the whole thing to make 'em really tight.


Is the nylon coupling you got rated for fuel?

I found this post really interesting , looks like I will be going the walbro route as I just installed a new bosch inline pump and found the intank unit that I thought was working was not

Would a swagged copper tube that could be braised on work?
Top

Dumb question time: Is there a reason not to use the smaller diameter pipe for the pump output? That would eliminate having multiple size hoses & adapters in the pump's output path. Putting an adapter on the return line would cause fewer pressure-related issues.

The only downside I can think of is losing the longer discharge pipe as a mounting point for the pump itself, but considering the fact that later model cars (e32s & e34s anyway) use pumps that only attach to the tank by way of hoses, I wouldn't think it'd be a huge issue. If it is an issue, extending the larger tube to the same length as the smaller tube wouldn't be a difficult thing either.

Earlier cars did it too.
My euro '84 735 came with the 100 liter fuel tank, and had the bayonet mount tank level sender without a helper pump, and ONLY used the main in line pump.

So the other option here, instead of doing the in tank pump, would be to modify the pickup with piping from the top to the strainer, and only use an in line external pump.
Top

I thought about the single external pump too, but I'm pressing ahead with the in-tank mod.

A couple more questions related to it:
Top

I wouldnt bother extendign the return pipe.
The oring when new is actually kinda square, at least the last one I bought was.
Total about 2", but its cheap so jus tbuy the BMW unit.
Top

Agreed on oring, I got one at dealer when I put in my walbro, much easier than trying to find a match.
Top

Yeah, the dealer... Every time I go there for anything it's at least a two business day wait (usually longer for an e28-specific part.) I was at Menards for something else last night and found a decent match with a #97 o-ring from the plumbing department. It'll get me by until I can get the real McCoy.

I ended up extending the discharge pipe down; I didn't like how the pump felt a little loose with just the hose in there. I used some brass pipe I had in my stash from another project, and a shaved-down brass 3/8" barbed hose mender fitting. No photos yet; I'll grab some before I put it all back together this afternoon.
Top

Here it is, in all its glory. I ended up having to move the hose clamp a bit to get it to fit through the access hole in the tank (test fitted it with the rubber gasket) and turned the ground screw around so the head is on the outside instead of the end of the screw.

I got it installed in the tank over the weekend but didn't have time to get underneath and finish connecting the hoses. May not have time for that until Wednesday either. 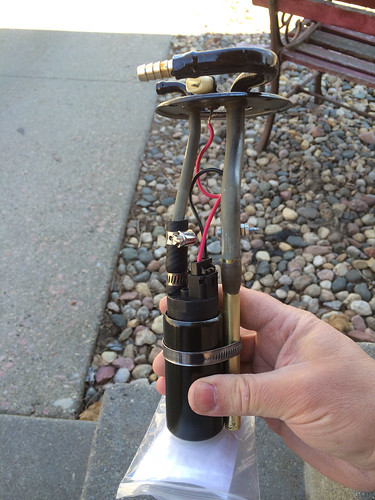 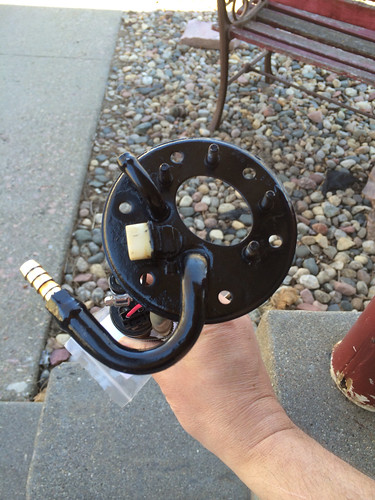 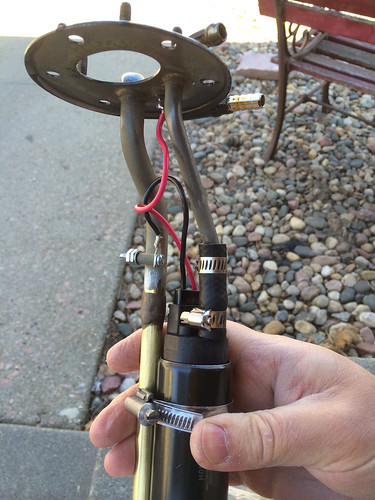 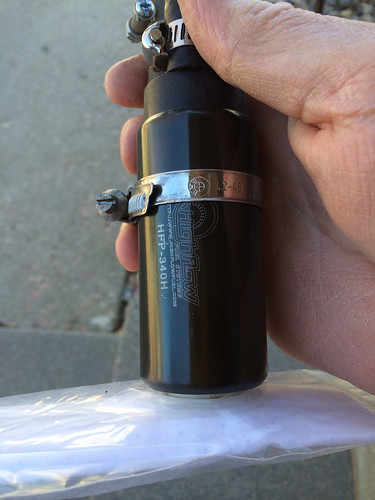 I wasn't comfortable with braising, and figured the connection was less critical on the return line, so I used some Permatex Instant Gas Tank Repair epoxy to seal things up. I'm more in the Jeremy camp of fuel pump aesthetics, and less concerned with how it looks than getting it working. I would love to have used an adapter like what Paul made for Chris, but I haven't seen any mention of that item since it came up in the other thread. I also considered briefly what ScottinVA did with his, but again the whole braising thing skeered me oft. I'll be watching this puppy closely to make sure nothing leaks, but I'm pretty sure it'll work fine. (knocks on wood.)
Top

I was forced into wrapping up this conversion today by the unexpected death of my e32's alternator; it died on me this morning, leaving enough juice in the battery to start it at noon and drive it home.

It took about a half hour to pull new hose through and hook up the new pump to the filter, and it started with just the slightest bump to the starter. Ran like a champ, and it felt like the slight hesitation on heavy acceleration was less, if not gone. The car likes new parts.

Davintosh,
I'd like to know if your fuel pump mod has been working well? Did you have to use a different fuel filter, I think the orig has a 3/8 inlet and a 1/4 outlet? And did the hose clamp on the pump fit through the hole ok?
Thanks,
Bill
Top

I installed same setup on my M5 but with the Walbro hp pump, which came with a different style bottom filter.
It has worked great so far since the summer with a good trek to South Texas for TexFest.
Top

It's the external pump that has the differing size inlet/outlet,
thus the pump housing modification.

As far as reliability, since my first install, our E28 ///M5 in May 2012,
I've since installed the same setup in 4 other cars.
The only failure was a blown off in-tank hose, shortly after the first install,
and that due to a failure to completely tighten one of the clamps.

Not sure who put that unit together, but due to my hands on approach,
and learning by doing temperament, I've got feeling it was yours truly.

I most recently replaced the stock failed in-tank pump in my wife's E32 735i with the same TRE-340.

slofut wrote:Davintosh,
I'd like to know if your fuel pump mod has been working well? Did you have to use a different fuel filter, I think the orig has a 3/8 inlet and a 1/4 outlet? And did the hose clamp on the pump fit through the hole ok?
Thanks,
Bill

Still working great, although I no longer own the car. My oldest son bought it from me when I moved in July, and has been daily-driving it since then. I think I had to reposition the hose clamp slightly to get it through the hole, and I needed to turn the bolt around that held the ground wire connector. I probably could've cut the end of the bolt off, but...
Top

Hey guys,
Thanks much for the replies. I got a HighFlow HFP340 and swapped the in-outs on the pump hanger, so I have 5/16 ports on both now. Will run a new 5/16 hose down to the filter. One thing for sure, it'll be easier to troubleshoot!
Top

Someone, in one of these Walbro threads, posted a comment about an alternative to the Walbro that's noticeably quieter. I thought I made a note of that, but can't find it. I've tried searching through all the threads, but can't find the post that way either.

Does anyone remember?
Top

Mine was plenty quiet too.
Top

Today, I replaced the Walbro that I showed above with the TRE unit. Much, much, quieter.

Video showing different is noise levels between Walbro and TRE:

Glam shot of the TRE with the included condom thingy that it comes with. Note with this cover on it BARELY fits and the rubber will likely tear upon removal. 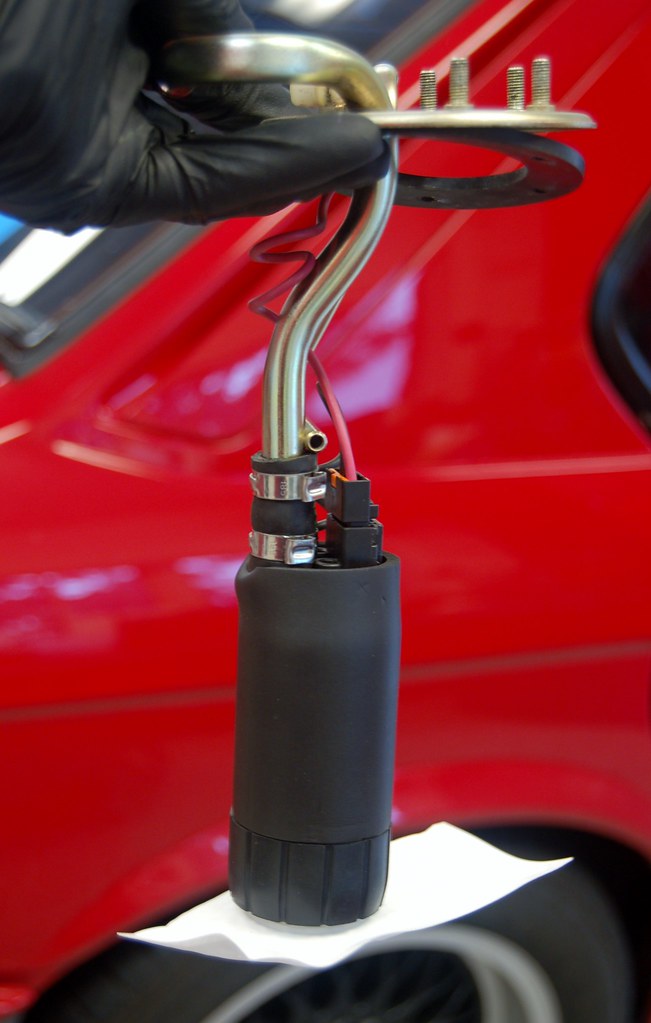