So I've had a weird coolant leak as of lately that I mostly suspect could be related back to the headgasket but I'm not 100% confident it is. I just put in a new radiator, water pump, thermostat and thermostat housing gasket, expansion tank cap, rad hoses, the plastic t under the manifold and two of the hoses that connect to the t (didn't do the heater core connection to the t as I forgot about it and it looked fine). So the issue is that after I drive my car to work which is around a 30 minute commute and park and come back to it a couple hours later I notice a puddle forms and drips down the oil pan. The weird part is that it doesn't do this everyday but is consistent enough to be annoying/a problem. I've found that if I release the pressure by taking the expansion tank cap off it doesn't leak at all in the spot I've pinpointed. However, when it does leak it looks like it is close to the block or intake manifold. Today when I was looking there was some coolant right around the nut on the intake manifold that is kind of close to the thermostat housing. From looking with my phone camera I don't believe I can see it coming from the thermostat housing area that is mated to the block and more so closer to the intake manifold nut or block. Also I will add that I don't notice any white smoke, no milkshake colored coolant, and everything seems fine while normal driving. So just curious on any insight on the issue, I could just be a dummy and it's something simple or if it is indicative of a failing headgasket.
Top 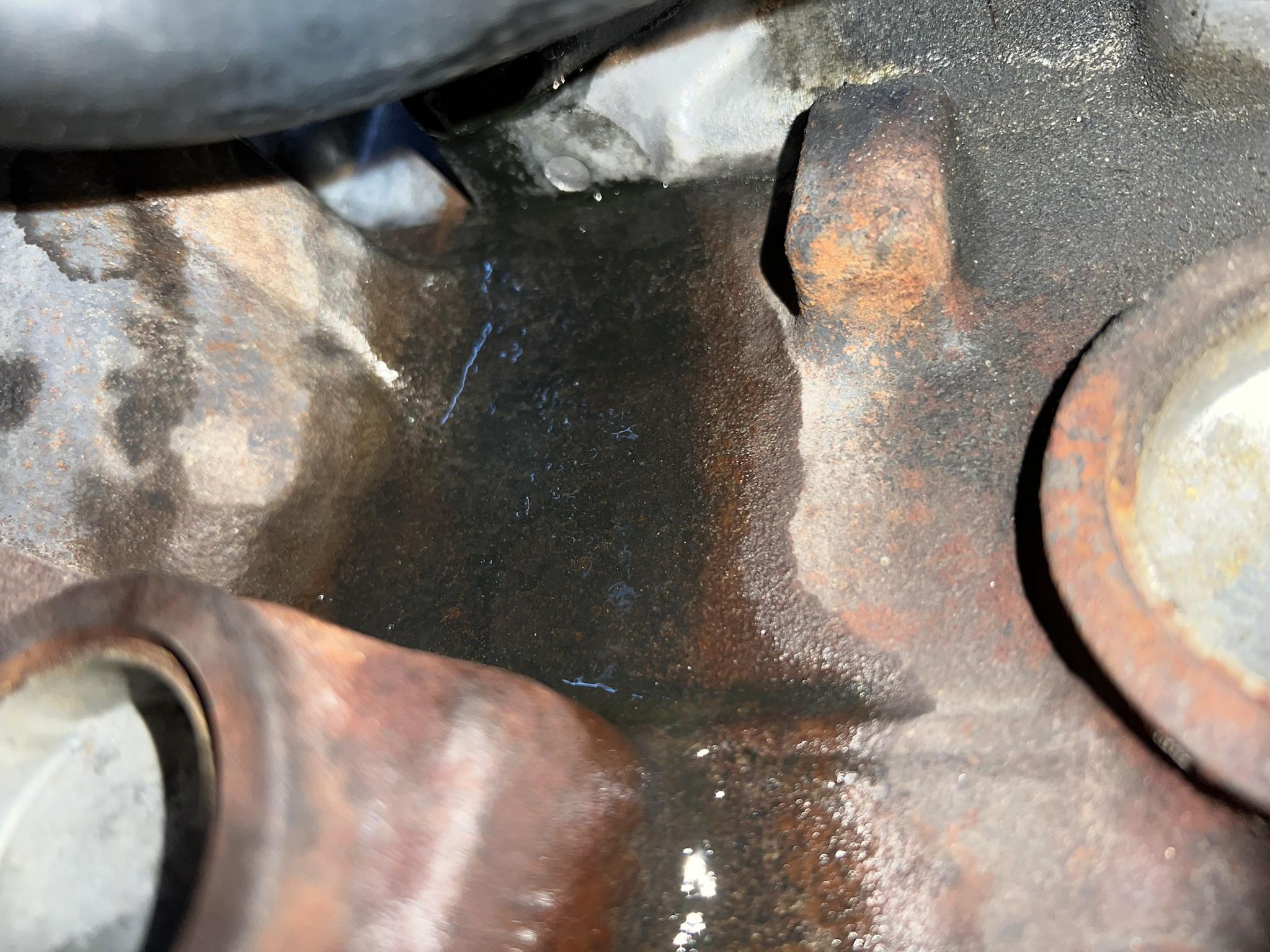 You need to get the area clean and dry and start watching it fresh. With the air flow in/around the engine, it could be coming from the thermostat housing, the head gasket, or a hose.
Top

Because if it didn’t leak before you replaced all that stuff, but started leaking right after, it’s highly unlikely to be the head gasket. And very likely to be one of the things you replaced.
Top

Yes I did have a leak from the hose that connects to the thermostat housing and snakes underneath the intake manifold to the plastic t connection and that is when I replaced those few hoses along with the other items as well. Also to note that the leak from that hose is the same scenario to where I currently have the leak. So to add on the clean and dry surface part, I don't believe it leaks while I am actually driving as when I get to work I have popped the hood a few times to inspect and everything seems to be all fine and dry. The times I've noticed puddles develop is after a few hours when I go out to check again around lunch time or even later than that. The pictures taken were at the end of the day with the car sitting for 7-8 hours. It could potentially still be the thermostat housing gasket that I just put on a few days after all the other items as I forgot to do that because I never removed the actual housing and didn't think to do that at the time; however, it doesn't appear to reach quite that high up there when I looked initially. Is there possibility that it could a be from the intake manifold gasket area or is that not possible on m30s.
Also the responses are much appreciated.

Did you notice any pitting or corrosion of the aluminum surfaces where the various hoses are clamped on? Things like that can cause leaks like this and with the cars being as old as they are that corrosion is more common now (I know mine are like this). I use a bit of Permatex Aviation form-a-gasket for these connections to get a better seal, I just brush it on the inside of the hose and a bit on the outlet/inlet before sliding it on an clamping it down. I also use it for paper gaskets like you would use on the water pump or thermostat housings as extra insurance against leaks, just brush a thin layer on both sides before assembly (also helps hold the gasket in place while you work).

Watching Speed Academy's latest series while they pull the motor on an Nissan R34 GT-R, the Japanese techs who worked on it in the past used some sort of RTV on all of the hose connections which they mentioned they had seen before on cars they had imported but thought was overkill. I'll keep that in the back pocket though if the above doesn't do it anymore for me in the future.

And to answer your question, there really isn't a logical reason for coolant to leak out the intake gaskets unless something has gone terribly wrong but you'd probably more concerned about the milkshake oil, clouds of white smoke out the back and an engine running like dog shit and not even notice anything there lol.
Top

There was some corrosion/built up residue of dried coolant and I tried my best to clean it up but maybe even with that new hose but older outlet it still weeps out a bit. So that makes sense and I’ve done the permatex thing on my water pump gasket but the hose and outlet sounds like another cool trick.
Top

So to do an update I believe me and my friend found the source of the leak. We used a small endoscopic camera to try to trace the path before we took the thermostat housing off and coolant would spill out. It appears that the main leak is the upper radiator hose to thermostat housing and drips on the intake manifold. The upper rad hose isn’t too old but it isn’t a oem part like the other hoses I recently replaced so I am waiting for a new oem upper hose to see if that remedies the problem and if that doesn’t help then possibly replace the thermostat housing as the water outlets were kinda pitted. Or maybe I’ll try that permatex method mentioned above. 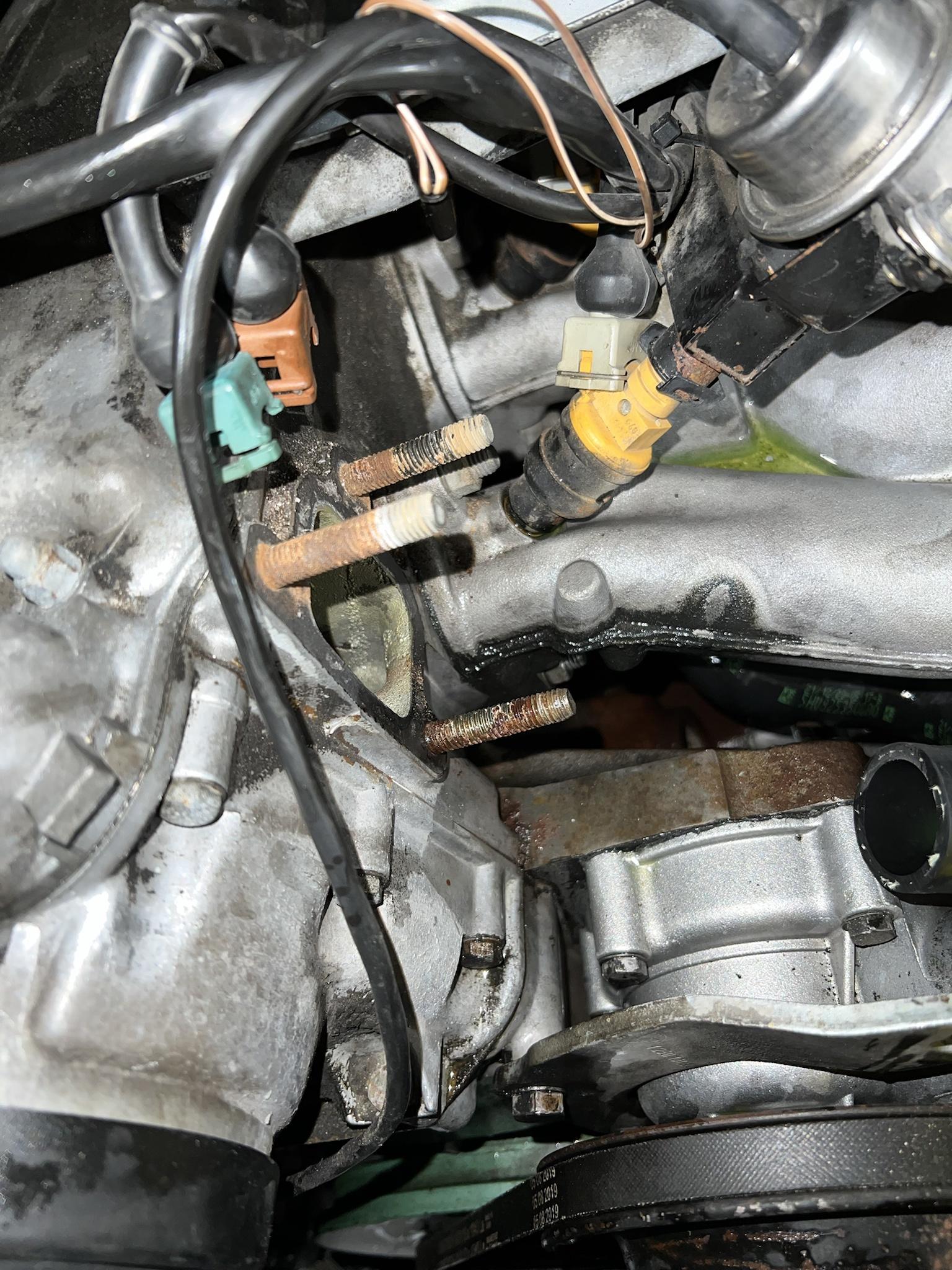 That appears to be the main drip spot which has a pretty clear mark right beneath the upper rad hose. Thanks for all the input I’ll report back once I finally eliminate the issue.
Top
Post Reply
8 posts • Page 1 of 1