Disclaimer: I know the dyno measures and displays figures from the wheels. I also know there is much disagreement on actual driveline losses for the e28, so where I have made calculations from RW to Crank in comparison of numbers from other manufacturers, I have used the calculator located at https://www.mk5cortinaestate.co.uk/calculator4.php. It seems to put it at just over 16% which seems reasonable to me. I don't wish to debate driveline losses in this thread.

Introduction: Hi! I'm Chris and I have a problem. There is much work to do, but I figured I may as well document my progress and experiences for the world, as we all know that forum posts are a valuable research tool and there is currently very limited info on naturally-aspirated M30 builds with dyno sheets to back them up. I believe the reason for that is that it is literally insane to try to get any decent amount of power out of a M30 NA, but I've done it anyway so I guess that tells you something about me.

In that light, I would be very pleased with 220 RWHP and torque or roughly 260 crank. I'll take more, but my efforts will at least be somewhat validated by those figures. 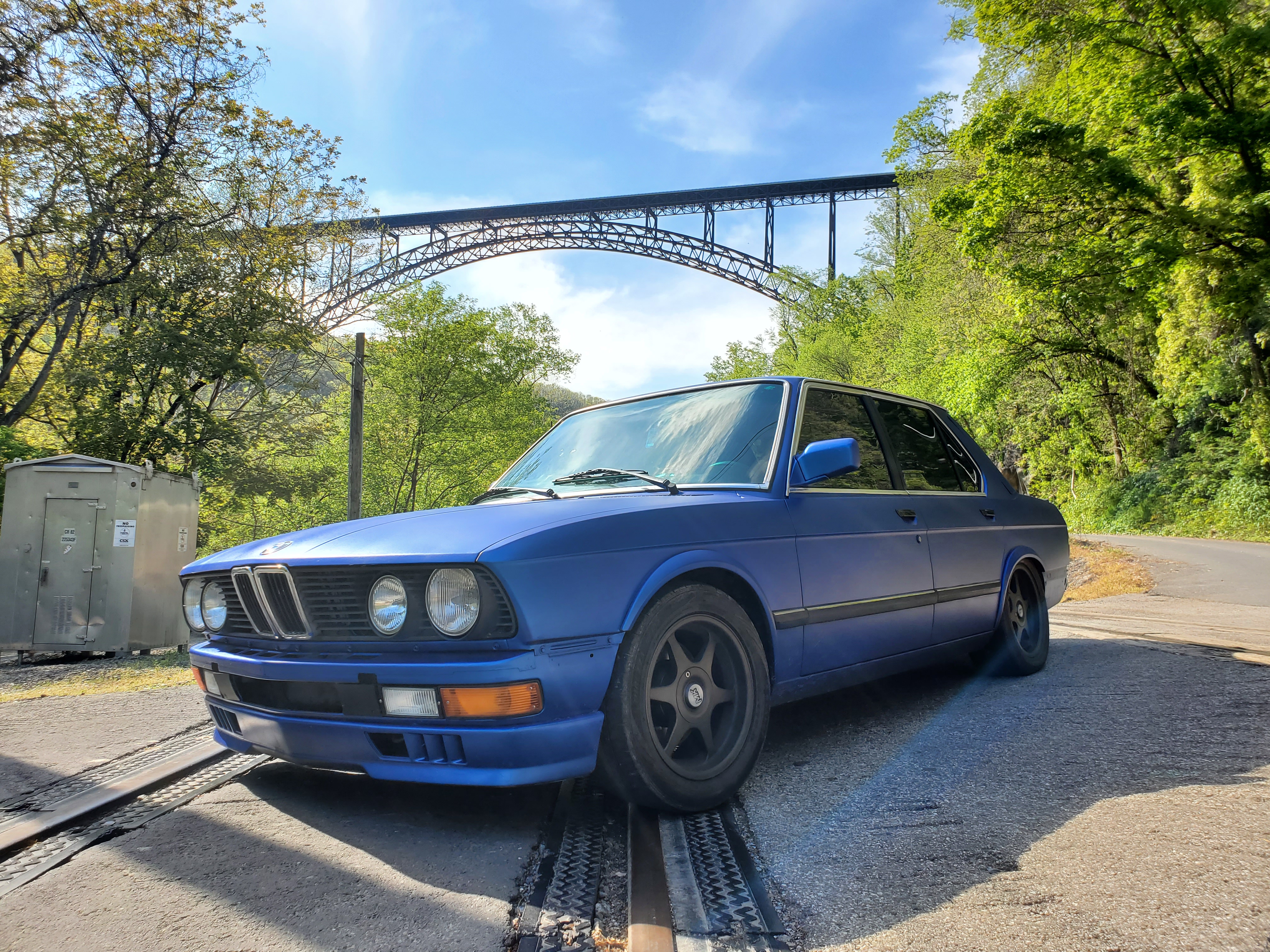 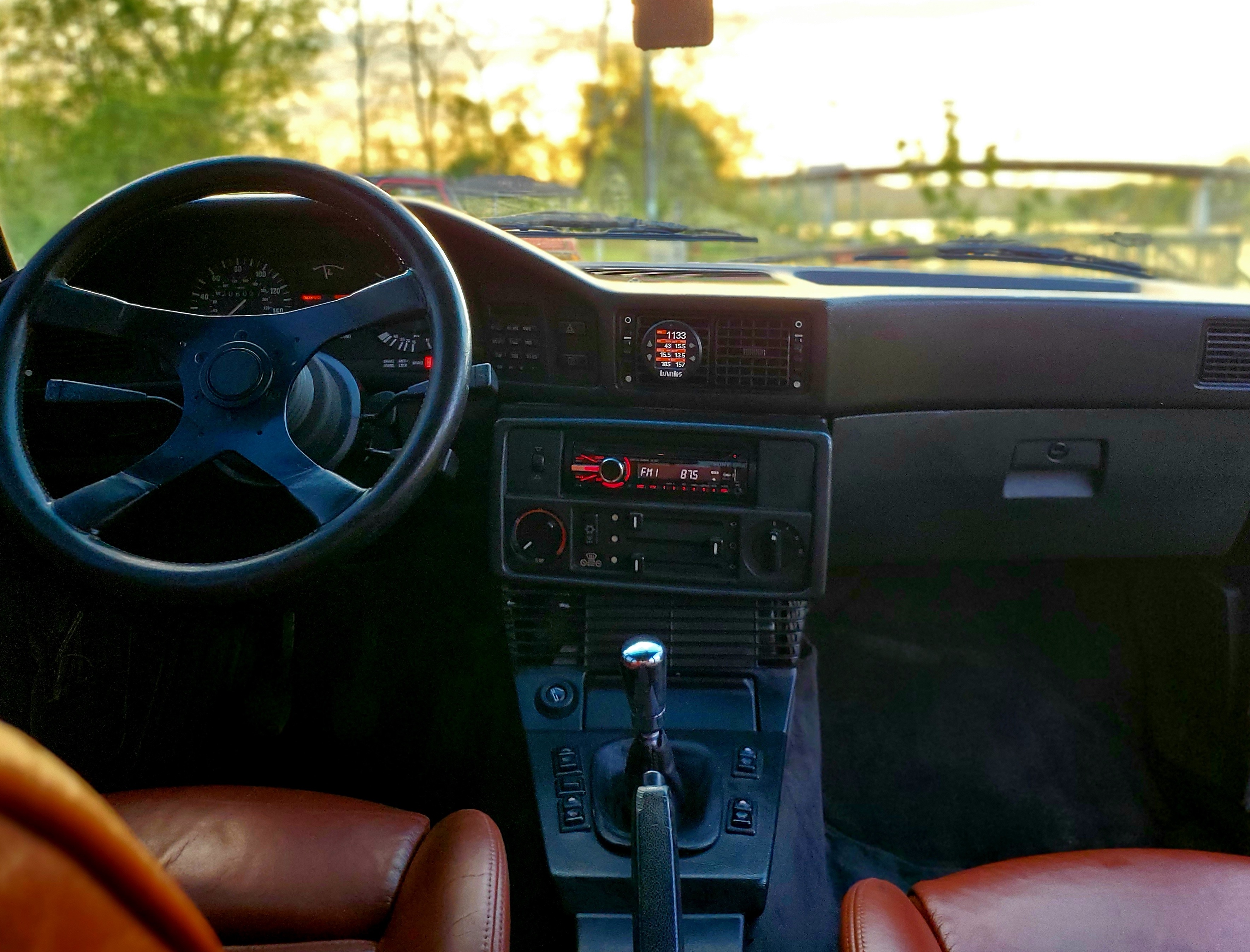 1988 535is 5-speed, currently sitting on H&R Springs, Bilstein shocks, 3.73 LSD, M5 sway bars, e32 brakes and some other various upgrades. The car is currently in PlastiDip World Rally Blue until I eventually get it in for a full paint job. 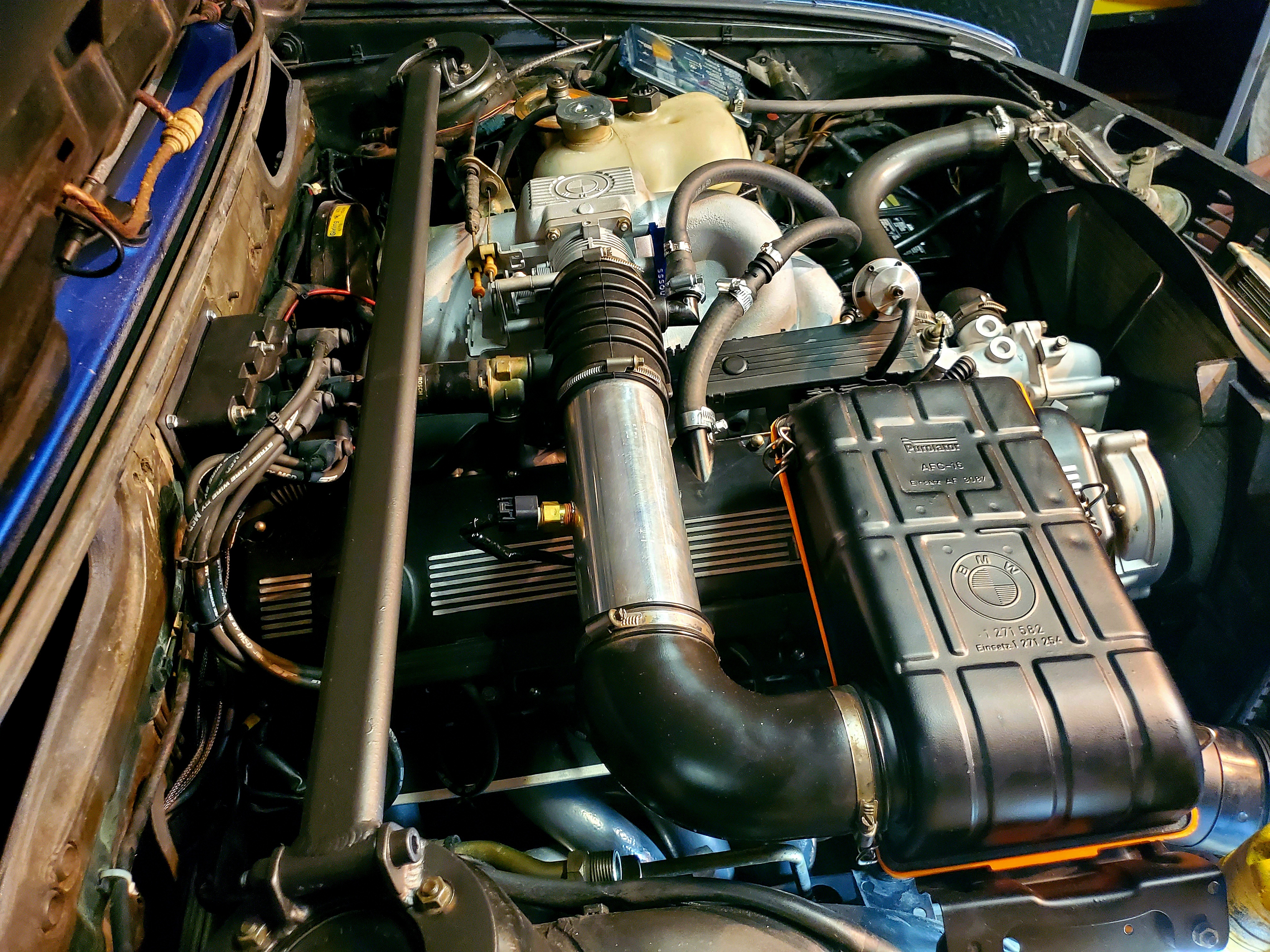 Exhaust: The before-stated Euro Headers are currently collected just behind the transmission to a single 2.5 in mild steel exhaust with Magnaflow offset muffler. This is an old setup taken from another car. It's at least 15 years old with suspect internal condition.

Intake: Aside from the AFM delete, the intake to the throttle body is completely stock to include all pieces to connect the headlight housing to the airbox.

Dyno Day #1 Well, after about a year and a half into the build and a few setbacks, I finally got some time scheduled with the tuning master Peter Florence. Drove the car to VA Beach where he worked some magic on my tune and ultimately did 8 dyno pulls. I have all of the raw files saved, but below is where we ended up at on Sunday. 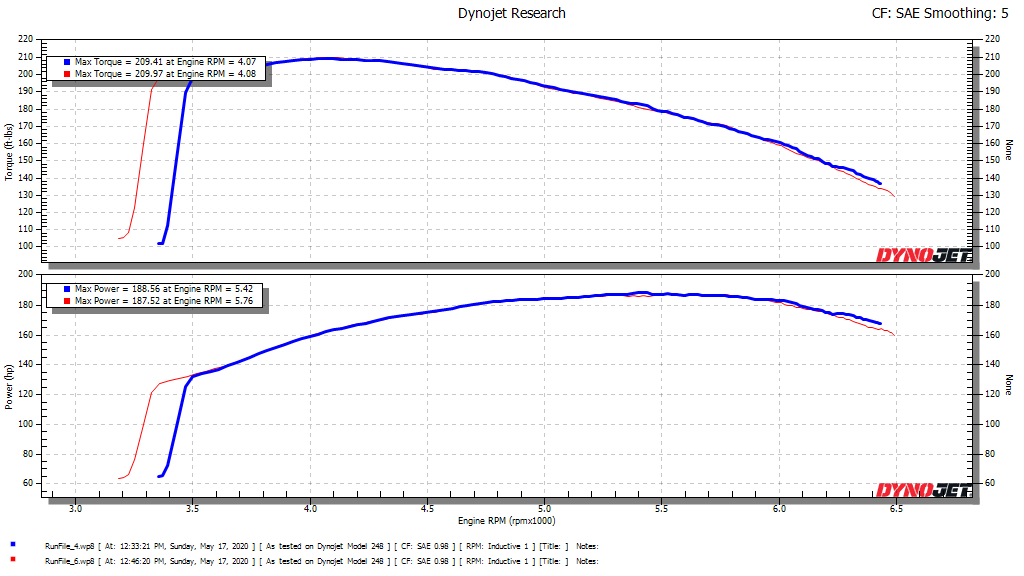 Obviously I'm a little ways off from my ultimate goals, but I left Peter's shop with a good idea of where I need to work.

Objective number 1 is the exhaust. Peter has worked on similar builds and believes that I'm definitely maxing out the limits of my 2.5 inch exhaust and suspect Magnaflow. I plan to either source a 2 inch dual exhaust setup for an M5 or build a stainless 3 inch single setup with a straight-through muffler. He also gave me some great info on collector necking that he's seen result in some not-insignificant power gains.

A NA engine needs to rev to make horsepower and with torque maxing out at 4000 rpm, he also believes I could benefit from retarding the cam a few degrees to move the power band up a bit. I plan to give that some serious thought before I return.

I also want to look into a few different air filter/intake length setups. Interestingly enough, we did a run with the airbox completely removed and I actually lost about 8 RWHP. Peter said that on some of the race builds he's done, he's actually routed the intake with multiple bends to get more length in the tubing and for some reason there were pretty good gains just by lengthening the intake tract. I may play around with a few different setups and bring them on the next go just to see the effect.

That's all I have for now. I'm interested to see your comments on this stupid build that I just keep throwing money at for as minimal gains possible. I will likely do the above upgrades over the Summer and schedule another day with him in the Fall. I'll update this thread with the new sheet when I do.
Last edited by WVe28 on May 19, 2020 11:25 AM, edited 2 times in total.
Top

I don't have anything to add other than to thank you for posting what you've done and the results of it. I'd love to put together a similar motor for my car which mostly sees track time, I think the numbers you are going for would make for a nice balanced car. I'm looking forward to updates whenever you can post them.
Top

Nice build! I have similar parts on my build but havent gotten around to scheduling a dino run. Good to see some numbers.
I got my 535i 5spd for $300. Currently sitting on bc coilovers, e32 brakes, stainless brake lines, ireland engineering sway bars (m5), 3.73 lsd dif, Metric mechanics ultimate getrag 260, sach 240 clutch, brass clutch pin.
Engines bottom end is stock with 300k on it but i have a b34 head built by bimmerheads, stage 3 port and polish, 283 cam, stainless valves, dual race springs, mustang injectors, d'sylva ecu chip, IE cermaic headers and cat back system with cat delete pipe. Next step is building the bottom end and lots of research.
Top

From a previous build i did on an m20 2.7 build. i had the same problem of torque production above 4000 rpm. Exhaust system changes helped but since i had a stock camshaft i never saw the full benefit. Also i kept the stock pistons so it was a cobbled together build that was less than the sum of it parts.

You have bumped the cr by increasing cylinder volume. The extra capacity may not be drawing in more air. Well it isn't. Your torque curve proves that. So given the lack of gas flow above 4000 rpm i would look at the following from my limited inderstanding.

What camshaft?. I have bought a alpina copy cam from fritz bits in the u.k. the duration may be too long. The longer the duration the higher the cr needed. Alpina used 280/282 duration with cr of 10.5:1. To get 250hp i intend to replicate there specification. I dont have an exact spec of the camshaft as its not so important for me as i am copying alpina as closely as possible. What is important though is not just peak lift but the cams profile and how the lift changes as it rotates. The alpina cam opens the valves quickly so much so that stiffer springs are not advised as they cause too much stress on the valve train leading to premature failures. Its made to stop pulling air through at 6900 rpm so the rev limit was set at 7000 rpm. Rockers failed at 7200 rpm. So peak Power was at 6000 rpm ish. Your peak power is coming at 5500 rpm. Either the cam is not letting sufficient air into the combustion chamber or there's another reason.


The Fritzs m30 exhaust manifold and exhaust system has really woken up the current engine, an m30b30. Its shape is dictated by the steering bix location
Its going on a dyno next week but 30 to 70mph acceleration time in 3rd gear indicate it producing more than before. I will be using this system on the new engine.

What did metric mechanic do to there head. Alpina did very little. They fitted larger valves. They port matched the inlet manifold to the head. They removed any casting inperfections. I have been advised not to polish the ports, alpina didn't apparantly. . Also been advised against making them bigger. This all makes sense to me. Gas speed needs to be maximised. It can slow down once it enters the cylinder. The valve stem guides protrude into the ports a bit. These can be shortened for a small gain.

The alpina engine seems to make it power from a combination of the higher cr which allows the cam they used to really draw air and expell exhaust gasses and the headers allow the gasses to actually escape.

Alpina used the m30b30/b35 throttle body. That gives the air intake pipe diameter. Making it longer does not make too much sense neither do more bends. 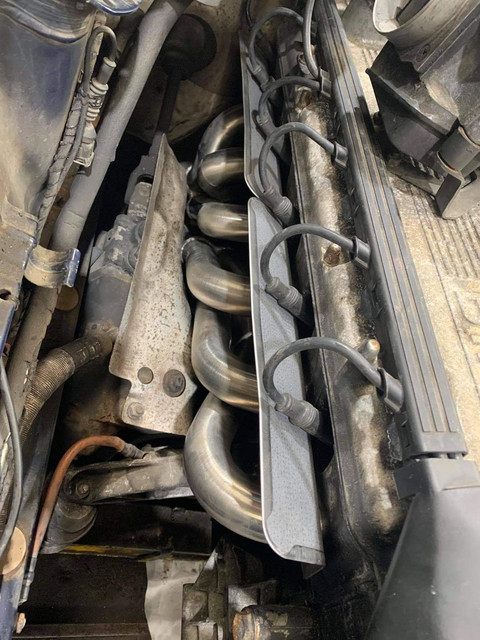 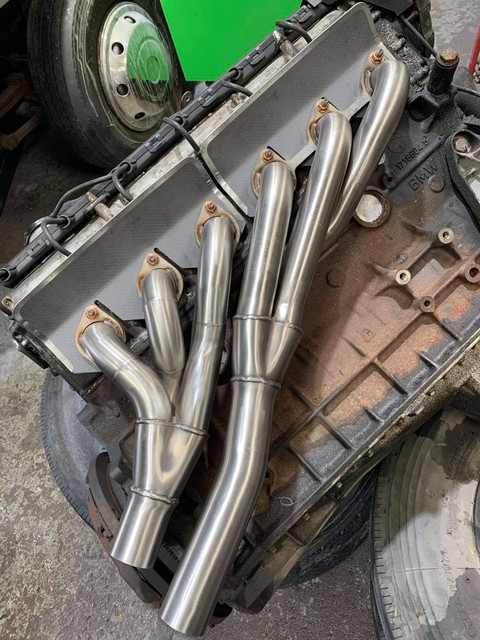 Your peak power at 5500 rpm is like you have a standard cam in there.

I wonder if you have pushed the bore to far and the inlet valves are now too small leading to incomplete cylinder filling.

For 596cc cylinder the inlet valve needs to be about 50mm and exhaust 41mm.

The valve sizes you have maybe strangling the engine at higher rpm. This could be it.

With a 92mm bore a 47mm inlet valve size is on the small side which is also one reason why the m30 just can't make big power. Vac motorsport do a 48/39mm valve set. These might be worth a look. I am certainly tempted for my build however do they fit well. Dont know.

Inlet ports are the other problem. They are an odd shape on the m30. Round is generally better. Its difficult to know what the ideal port diameter is but it not bigger than the factory port.

The exhaust manifold also need to provide a step to the exhaust port. If the exhaust port is port matched to the manifold you will be getting exhaust gas reversion and at high rpm the engine just can't clear exhaust gasses leading to lower power output. You would normally see high HC content in the exhaust though due to improperly burnt fuel like it running rich. So then fueling gets cut back by the ecu killing power.

There are lots of reasons. So a more detailed breakdown of the engine spec required.
Top

Has the combustion chamber been modified?
Top

It seems your results are within the ranges described here: http://www.m535i.org/officers/ra/article.html#motor (scroll down and look for "High power M30").

According to that page, Alpina and Hartge had >10:1 static CR to make over 250hp.

I understand you are using the B35 intake manifold but isn't it that the B34 head flows less than the B35 head? Is there a specific reason why you chose the B34 head?

Another edit from the very first link:

Inlet port size is much larger on the B35, with better line of sight.

The increased displacement helps, but you need more compression, like 10.5 or 11:1. I don't think I see mention of a cam either. I'm not enough of an expert to know which one, but I do know you'll need more than stock to get your target number. But compression is a huge factor, you just don't have enough.
Top

He mentioned having a 290 cam and I agree with you that maybe more compression would help.
Top

He mentioned having a 290 cam and I agree with you that maybe more compression would help.

How many hp would a point of compression be worth? Or how much extra compression would it need to make 210 rwhp?


I’m curious to see what effect revised exhaust will have. Also curious about cam timing.
Did you monitor manifold vacuum during dyno pull?
Did your guy dial the tune in with just 8 pulls?
End of the day, dyno is useful for tuning and before/after numbers. For absolute HP numbers we can’t trust it really. Transmission loss is not a percentage nor fixed power loss. I’ve seen some interesting comparisons from engine dyno-chassis dyno- upgrades motor back to engine dyno and finally back to chassis dyno. That particular test showed inconsistent power train losses.
Top
Post Reply
10 posts • Page 1 of 1