General conversations about BMW E28s and the people who own them.
Post Reply
119 posts

A St. Paul man suspected of robbing a Roseville dollar store on Christmas Eve was quickly identified after forgetting to put on his mask. Quincy G. Petty, 39, strode into the Dollar Tree on Larpenteur Avenue just after 8 a.m. and approached the cashier, saying, “Open your register, I’m robbing you,” according to charges filed last week. An employee at the store recognized the suspect as the boyfriend of a colleague before he remembered to put on his mask, court records show.Petty and a male accomplice left the store with about $1,700 in cash, police said.He was later arrested outside his girlfriend’s home, where authorities found more than $600 in his pocket along with a crumpled-up envelope with the word “robbery” written on it.
Top

Niiiiice..... How did he ever get this far in life I wonder.
Top

stuartinmn wrote:along with a crumpled-up envelope with the word “robbery” written on it.

He had to break out each individual crime for tax reporting purposes. Probably had receipts for the mask and getaway Uber in the envelope.

Smart man, he remembered that that was how they got Capone!
Top

Woman banned from Walmart after riding cart while drinking wine from Pringles can, police say

Couldn't even make this stuff up.
Top

Suspicious activity. Officers received a report of a drone flying over a house at night and shining lights in a window in the 1200 block of Oakview Drive. The complainant was advised to call back if it happened again. When it did, officers went to the home and determined that the light coming through the window was from the moon.
Top

Suspicious activity. Officers received a report of a drone flying over a house at night and shining lights in a window in the 1200 block of Oakview Drive. The complainant was advised to call back if it happened again. When it did, officers went to the home and determined that the light coming through the window was from the moon.

Shoot the moon down! Hilarious
Top

Unfortunately, this happened locally; fortunately I did not have to witness it:

TULSA, Oklahoma - A Tulsa man was arrested for walking into the Tulsa County Courthouse wearing only a shirt, black leather harness and shoes, according to an arrest report.

Brian Edward Johnson was booked into jail Monday, January 7 on a complaint of indecent exposure.

Tulsa County Sheriff's Office Deputy John Hill said he was on duty at the courthouse when Johnson walked in the north doors around 10 a.m.

"Johnson was wearing a blue t-shirt, black leather harness without pants or underwear, and black shoes," the deputy said.

The 55-year-old man told investigators he was dared to go nude to the courthouse and had "gotten naked" in his car outside. Security video showed Johnson "exiting his vehicle nude from the waist down making furtive glances as he approached the Courthouse entrance," the report states.

Johnson left the Tulsa County jail Tuesday evening after posting a $2,000 bond. Jail records show his due back for a court appearance on Monday, January 14th.
http://www.newson6.com/story/39754193/m ... courthouse

Reference to what he drove to the courthouse:
TULSA — A naked man walked into the Tulsa County Courthouse.

No, this isn't the start of a joke. It happened on Monday at approximately 10 a.m. when Brian Edward Johnson was caught on courthouse surveillance cameras walking into the building wearing only a blue t-shirt, black shoes and a black leather harness without any pants or underwear on.

Tulsa County Sheriff's deputies said Johnson parked his Porche 911 outside the courthouse and entered the courthouse fully exposed from the waist down.

After he was arrested, Johnson said he was dared to go to the courthouse nude and appear naked in front of Federal Judge Daniel Boudreau, a booking report stated.

Johnson was booked into the Tulsa County Jail and released after posting his $2,000 bond.

He is due back in court Monday, January 14, jail records stated.
https://www.kjrh.com/news/local-news/na ... s-arrested
Top

I wonder if Mr. Johnson would've been better off wearing a pair of these: 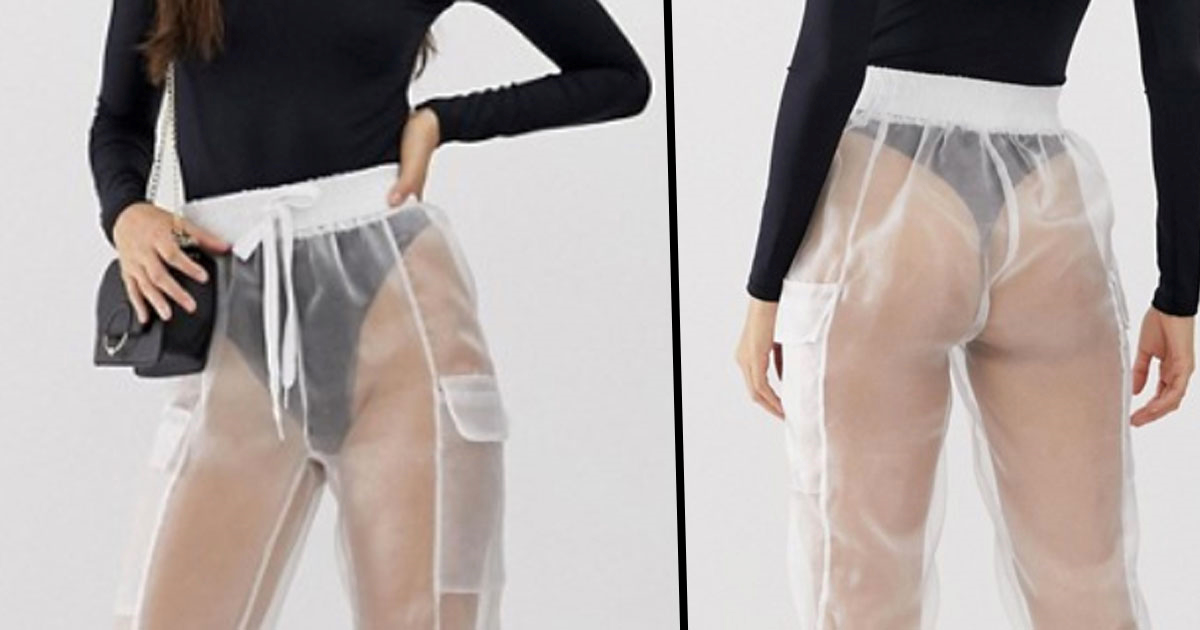 I don't know what it is about the moon, but it seems to be disturbing this person...they called the cops again

MEDINA JAN. 19 Suspicious activity. An officer responded to a report of suspicious activity in the 1200 block of Oakview Road. The caller stated that there was a large bright circle in the sky. The officer didn’t see anything in the sky besides the full moon.
Top

A tow company crew was still working on Monday to clean up a week after a semi trailer truck crashed near Hagerstown, dumping about 8,000 bottles of ranch dressing into and along the banks of the Little Conococheague Creek. One employee called it a “nightmare.” The tow company said it was hired by the company that operates the truck that crashed March 2 as it was traveling along eastbound Interstate 70 near the creek. The truck was carrying about 20,000 bottles of ranch dressing at the time of the crash; the highway was closed for more than 10 hours.
Top

I really do think I wouldn’t be able to survive that.
Top

Swimming in the Sioux Falls flood

SIOUX FALLS, S.D. (KELO.com) -- Two people were found swimming in the waters of raging Skunk Creek in Dunham Park in the midst of the Sioux Falls flooding.

Doug Blomker with Minnehaha County Emergency Management says first responders rushed to the scene, thinking they had a water rescue on their hands.

They found the two swimmers and told them to get out.

The Skunk is really angry. It's raging waters swept away the pedestrian bridge at Dunham Park.

"We just recommend that just nobody go into the water right now because frankly if you just go in a little way and that water takes you, you're gone!" says Blomker.

It's kind of like the surfers who hit the waves in the middle of a hurricane.

No, it's like a couple of dipsticks who don't have sense enough to keep their scrawny asses out of sub- 40° water that's high enough and moving fast enough to sweep away a pedestrian bridge.
Top

I saw that and had to read it twice to make sure I read the aggravated assault part right. If they were taking turns at it, how can it be a punishable crime?

MARCH 1
Suspicious activity. A nickel taped to the front window of a home was reported in the 10 block of High Point Road. The homeowner had no idea how long it had been there.

MARCH 2
Suspicious activity. A resident in the 18000 block of Layton Avenue reported a truck drove by his residence twice and the driver rolled down his window and spat.
Top

Not humorous, more a case of he got what he deserved.

A man suspected of being a rhino poacher was killed last week by an elephant and his remains devoured by a pride of lions at a South African park. Rangers at Kruger National Park and other searchers found only a human skull and a pair of pants, the park said.
Top

Back on the light side, a Roomba was the suspect this time.


An Oregon sheriff's department responding en masse with "guns drawn" to a call about an intruder locked in a woman's bathroom found the suspect was in fact a Roomba robot vacuum cleaner.
The Washington County Sheriff's Office said in a statement Tuesday that a woman called to report a person was in her bathroom with the door locked and said she could "see shadows under the bathroom door."
Seven minutes later "multiple deputies" arrived at the home, and requested K9 backup, the statement said.

It's unclear if the Roomba has retained an attorney.

MAPLEWOOD MARCH 11 Theft. Police were called to Red Lobster, 2925 White Bear Av., after three diners drove off and left the fourth in their group with a $227 tab. The latter person told police she could not pay the bill, that her wallet was in the vehicle in which the others (including her sister) had left, and that she did not know they were going to leave. She was cited for theft of services. Police later in the evening came upon her sister — still wearing a Red Lobster bib — in an unrelated incident, and also cited her.
Top

Jennifer Gayman of Brookings, Oregon, said she was driving home from a karaoke bar in November when police officers pulled her over and ticketed her even though she informed them that the scooter was prescribed by her doctor and that it was her only way of getting around, according to police bodycam footage of the incident released to ABC News on Wednesday by her lawyer.

Johnstun said the incident unfolded on the night of Nov. 18. "It's important to note that she wasn't drinking that night," he told ABC News.

"You're going to go to jail if you continue driving," an officer told Gayman as she drove away.
Officers then chased Gayman with their lights and siren on and radioed for backup.
They pursued Gayman all the way to the garage of her home where they handcuffed her, read her Miranda Rights, searched her and placed her under arrest on suspicion of attempting to elude police, interfering with a peace officer and disorderly conduct.

Looks like we're safe, Brookings police are on the beat.
Top

A man was reported entering a portable toilet in Point Douglas Park, 14500 Point Douglas Dr., and not coming out. A deputy observed the porta potty with its door latched shut and asked if anyone needed assistance. Upon hearing no reply the deputy pulled the door open. Nobody was inside.
Top

MAPLE PLAIN OCT. 25 Suspicious activity. An officer spotted a man walking down the side of the road, against traffic, and twirling a baton in each hand, in the 1400 block of Halgren Road. The man said he was just walking around enjoying the day and listening to music.

MEDINA OCT. 28 Assist public. An officer responded to a report of a missing mouse trap that had been set in the basement of a home in the 100 block of Railway Street. The officer believed the trap may have fallen into a hole near where it was set.

PLYMOUTH OCT. 31 Theft. A resident reported that a bowl of candy had been stolen from the front steps of their home in the 14100 block of 56th Avenue.
Top

MAHTOMEDI NOV. 2 Suspicious activity. A resident in the 200 block of Iris Street reported a group of juveniles throwing cheese at her front window. Authorities were unable to locate the suspects.

RAMSEY NOV. 8 Suspicious activity. A resident in the 6900 block of 137th Lane NW. reported finding an item that looked like a hamburger patty on the top step of her deck, and she said her dog was licking it. She was unsure where it came from and wanted to file a report.
Top
Post Reply
119 posts